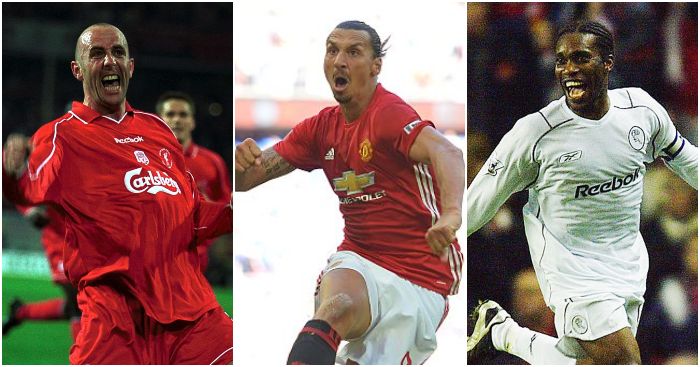 Liverpool can lay claim to two of the best free transfers in Premier League history, including the inspiration for this list. But not 1).

10) Demba Ba (Newcastle)
After joining West Ham on January 28 2011 and still somehow finishing as their top goalscorer in the Premier League that season, Demba Ba had earned a place alongside Scott Parker in an otherwise unappealing and dreary shop window covered in offensive graffiti and faeces. A clause in his three-year contract allowed the striker to move for free upon relegation, with both Everton and Newcastle expressing an interest.

The latter proved a more tempting prospect, presumably after a persuasive PardewPoint presentation based around pineapples and Papiss Cisse. Ba moved north, fired the Magpies to fifth and a Europa League quarter-final, and was gone within 18 glorious and captivating months. He left with 29 goals in 54 games, a Player of the Month award and as many Premier League hat-tricks for Newcastle as Alan Shearer and Andy Cole.

9) Marc Albrighton (Leicester)
While Joel Matip and Gus Poyet are both unfortunate to miss out on a place, room has to be made for Leicester’s first Champions League goalscorer. Marc Albrighton had been an irregular presence in the Aston Villa side until his 2014 release, at which point the promoted Foxes figured they had little to lose in giving the winger a chance.

They would not regret the decision. Albrighton’s first season at the King Power Stadium saw him start just two Premier League games from August to April, being substituted in both. He was then brought on at half-time of a 2-1 win over West Ham and would start each of their final eight matches as the Foxes secured survival in style.

Claudio Ranieri picked up where Nigel Pearson left off in general, but particularly with Albrighton. He did not miss a single game as Leicester unfathomably lifted the title the next season. He ranks joint-sixth with Wes Morgan in terms of Premier League appearances (164) for the Foxes, with Robbie Savage (172) firmly in his sights. Not bad for a player Paul Lambert couldn’t be arsed keeping.

8) Ruud Gullit (Chelsea)
For an insight into the perceptions Ruud Gullit had to overcome at Chelsea, consider the answer he provided to one of the questions at his 1995 press unveiling. Asked whether it was true that he would pick and choose when to play, the Dutchman replied: “Somebody took it the wrong way because I joked that if there was a good soul concert in London I would be unavailable.” When it was then put to him that his fitness might prove an issue, he simply added: “If you have possession of the ball you don’t have to run around chasing after it.”

At 32, and with his career winding down, the accusations were inevitable. The Premier League was not then as it is now; foreign talents were still viewed with suspicion. Gullit – voted runner-up to Eric Cantona in the Footballer of the Year vote in his debut campaign – did more than most to change that.

7) Gary McAllister (Liverpool)
Everton will never deploy a two-man wall again, at least not when half of its composite parts move out of the way before the ball is kicked. Liverpool had not won at Goodison Park for 11 years until Gary McAllister lined up a 44-yard free-kick in stoppage time that April 2001 evening.

They had not really done all that much in those barren years before McAllister’s unassuming arrival as a 35-year-old free signing from Coventry the previous summer. Their most recent trophy was the 1995 League Cup; their best Premier League finish was third a season later. McAllister proceeded to score in the 2001 UEFA Cup semi-final and final, assisting three goals in the latter, with similar transformative turns as a substitute in FA and League Cup final successes contributing to that plastic Liverpool treble.

Merseyside’s favourite namesakes remember him incredibly fondly. Manager Houllier described McAllister as his “most inspirational signing”, while midfielder Steven later recalled a Liverpool role model “I could learn from both on and off the pitch”.

6) Michael Ballack (Chelsea)
Perhaps it is more instructive of Chelsea’s dominance at the time, but it remains a startling statistic: Michael Ballack never lost a Premier League game to a side in the bottom half. While the Blues suffered setbacks even at their most imperious, they rarely occurred on the watch of a midfielder Alan Hansen once accused of “playing with a huge cigar in his mouth”.

Ballack moved to Stamford Bridge during a strange period for the club. He signed from Bayern Munich in 2006 after Jose Mourinho’s machine had secured back-to-back titles but would have to wait until his final campaign in 2010 under Carlo Ancelotti to add a Premier League winner’s medal to his collection. Heartbreak with Bayer Leverkusen and Germany in 2002 was emulated six years later with defeat in the Euro 2008 final, second place in the Premier League, and a role as beaten finalist in both the Champions League and League Cup. He scored his penalty in the former’s shootout, to no avail.

Though never the most outstanding midfielder at any point during his Chelsea tenure, the German was the most consistent. Frank Lampard, Michael Essien, Claude Makelele, Joe Cole, Deco and even Steve sodding Sidwell shone brighter at times but Ballack never flickered. He was a player with no discernible weakness and precious few peers.

5) Zlatan Ibrahimovic (Manchester United)
In a way, Zlatan Ibrahimovic is emblematic of every wrong turn Manchester United have taken as they continue to navigate their post-Sir Alex Ferguson apocalypse in search of greater meaning. A 34-year-old signing for eye-watering wages as a marketable brand and an obstacle to younger players was Jose Mourinho’s explicit attempt to transplant a different mentality into the dressing room at Old Trafford. It was short-termist thinking at its most damaging.

Yet Ibrahimovic confounded each and every expectation. The claims to have “conquered” the English top flight soon grew tiresome but there was some merit to them. He remains the oldest player to score at least 15 goals in a single Premier League season, netting 17 by the time he had turned 35. A match-winning turn in the League Cup final, some wonderful performances en route to Europa League glory and a nomination for the PFA Player of the Year award capped a breathtaking debut campaign. His impact was fleeting but phenomenal.

4) Jay-Jay Okocha (Bolton)
Forgive the moment of indulgence, but any mention of Jay-Jay Okocha evokes memories of one of my most prized childhood possessions alongside my GameBoy Advance, Bop It! Extreme 2 and inherent lack of social skills. There still resides a copy of the official FIFA VHS The Stars of World Cup ’98 at my mother’s house, never to be rescued.

It was a curious piece of media, less a linear look at the tournament’s progression and more a showcase of its most colourful and vibrant stars. Brian Laudrup featured heavily, as did Michael Owen and Jose Luis Chilavert. Marcelo Salas and Ivan Zamorano were afforded their own dedicated highlights package despite Chile’s relative disappointment. They exited the tournament at the same stage as the video’s true star: Okocha.

His skills and thrills earned him a place in the team of the tournament, as well as the title of most expensive African footballer of all time upon a move to Paris Saint-Germain. Okocha signed a four-year deal and, after a spell that delivered comparatively little in France, was on the move again after captaining Nigeria at the 2002 World Cup.

Bolton was not a particularly natural home. The Trotters had just finished 16th in the Premier League and ended the campaign with three successive defeats. But Okocha helped define one of the most iconic teams in Premier League history, helping take them into Europe by his 2006 departure.

The League Cup semi-final free-kicks against Aston Villa; the thunderbastard at West Ham; the public deposition of Ray Parlour; Okocha was every bit as captivating and unforgettable as he had been on that tape.

3) Brad Friedel (Blackburn)
Back in November 2000, Graeme Souness was in the process of mending a battered managerial reputation. Four years at Rangers had heralded three Scottish titles but they were followed with more than a “monster mistake” or two at Liverpool. Some flag-planting therapy was arranged at Galatasaray before George Weah’s cousin betrayed him at Southampton. After four forgettable months in Torino and 18 months telling Benfica to sell Deco, the Scot finally found ample distraction for his inexplicable hatred of a seven-year-old French boy with great hair by taking over from Brian Kidd at Ewood Park.

Souness delivered promotion in his first full season and the League Cup in his second; Brad Friedel was signed in between. One of the Premier League’s most enduring talents was given the sort of stable platform that Liverpool had neglected to offer.

While the Reds scrambled around for a reliable goalkeeper from the American’s Anfield departure to Pepe Reina’s arrival half a decade later, Friedel set about re-imagining longevity and durability in England’s top flight. Only Edwin van der Sar (88) kept more Premier League clean sheets than Friedel (77) during his time at Blackburn, and the Dutchman was certainly not playing behind Craig Short and Andy Todd.

2) James Milner (Liverpool)
There might never have been such a satisfying linear career progression. Starting out as a relegation-battling teenager, James Milner has blossomed into a consummate professional and leader by example on the verge of his third Premier League title over the course of 18 exemplary years.

Even his number of appearances and goals have followed that gradual path of improvement. At Leeds, 48 and five. At Newcastle, 94 and six. At Aston Villa, 100 and 12. At Manchester City, 147 and 13. Milner is three top-flight games away from Liverpool becoming his most regular Premier League club.

Few would have expected that when he joined under Brendan Rodgers in 2015. But Milner has exceeded even his own expectations, adding right-back, left-back, goalline-clearance and assist-shaped strings to an already impressive bow in half a decade at Anfield. Jurgen Klopp knows Liverpool could not have done it without him.

1) Sol Campbell (Arsenal)
I considered choosing someone else as the greatest free transfer in Premier League history, but I am Sol Campbell.

The assembled media, of which there were few, expected little more than the routine unveiling of Richard Wright as Arsenal’s newest signing in early July 2001. Then out walked a fearsome English centre-half whose Tottenham future had dominated the summer headlines. Arsenal supporters still regret that it was Campbell, not Chris Perry, who was explaining why he had turned down Barcelona, Inter Milan and Bayern Munich while being proudly paraded by Arsene Wenger.

“I had Thierry Henry, who used to pass people for fun. But with Sol, there was a wall,” Wenger later noted. “It was as if he was indestructible, such a power spread from him. I wanted him in my side and told David Dein that.”

His wish was the vice-chairman’s command. Campbell crossed the north London divide, won a league and cup double in his first season, became an Invincible in his third and scored a Champions League final goal in his last, provided everyone agrees to ignore that ill-advised encore in 2010. For a time, the country’s greatest centre-half was priceless in more ways than one.