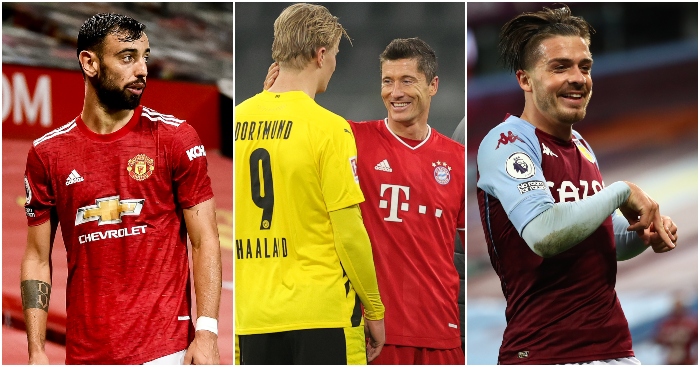 Where would United be without Bruno? It genuinely doesn’t bear thinking about. No player in the Premier League has recorded more goals and assists in all competitions since United signed Fernandes* from Sporting Lisbon.

The veteran seems to have tweaked his style slightly again and Vardy is part of perhaps the most efficient strikeforce in the Premier League. He certainly was before Fulham beat Leicester to make us all look daft again on Monday night.

Not worth the money in the summer, apparently.

After being involved in 10 goals in the first six games of Spurs’ season, he’s only played a role in one in the four matches since. Sell him.

READ MORE: Mourinho and Son – in the business of success

Back in Germany after a year at Fenerbahce, Kruse missed the chance to break a 37-year-old Bundesliga record when he missed what would have been his 17th consecutive converted penalty against Cologne. But the 32-year-old bundled in the winner from the rebound.

It's the first Bundesliga penalty he's ever missed, but we don't think Max Kruse will mind too much 😅#KOEFCU 1-2 pic.twitter.com/nVXesWuGmi

Covid got a dose of Zlatan earlier this season but that hasn’t stopped the frankly ridiculous 39-year-old. After returning from the ‘rona, in five matches, Ibra scored eight and laid on another.

Prior to last week, the Golden Boy hadn’t scored away from home in the Bundesliga yet this season. So he put that right with four goals in the second half at Hertha Berlin. Haaland has also scored six goals in four Champions League games this season among 33 goals in 32 games overall since joining Dortmund in January.

In case you missed it, Erling Haaland had quite a productive Saturday. Named the 2020 winner of the Golden Boy award, he also bagged four second half goals in Dortmund's 5–2 win over Hertha. Just unstoppable.pic.twitter.com/0R0t1ot0jH

Mbappe missed the first three games of the Ligue Un season with covid. When he returned, he had a hand in 12 goals in six games. He then got a couple more upon his return to Monaco before Cesc Fabregas showed up to p*ss all over Thomas Tuchel’s chips.

Kane has already this season equalled his number of assists for the previous three campaigns combined. The draw at Chelsea on Sunday was the first Premier League game since the opening day of the season in which the Spurs centre-forward wasn’t involved in a goal.

READ MORE: Hero of the week: The criminally-underrated Robert Lewandowski

The Polish goal machine has followed up his 55 goals from last season with another 15 in 14 games for Bayern this season. The undoubted winner of the Ballon d’Or had it not been cancelled and no.9 in Big Sam’s Almost XI.

*Buy Bruno Fernandes and thousands of other players on Football Index. 18+, UK and Ireland customers only, begambleaware.org. T&Cs apply.