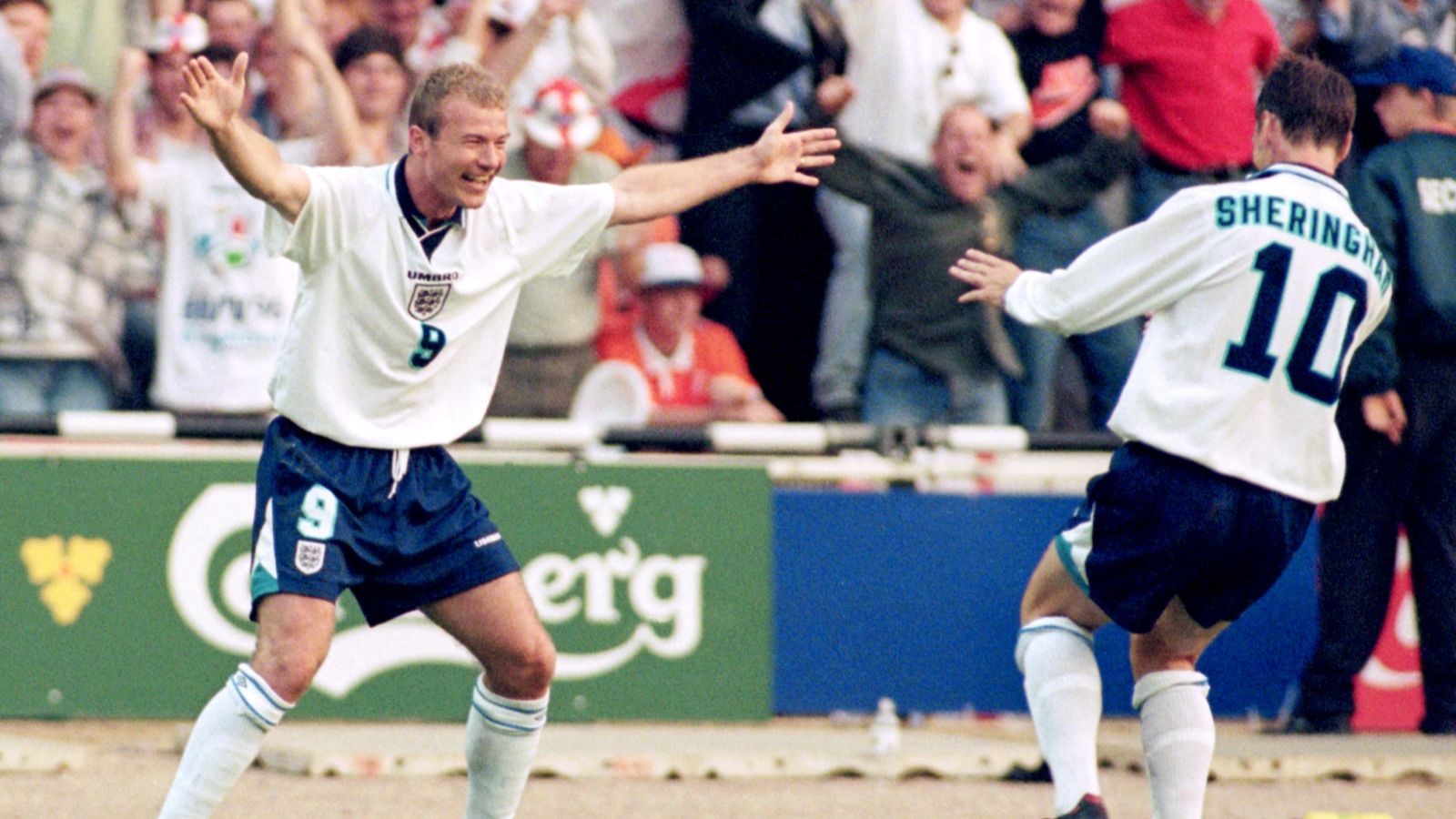 Doing this made us realise that for all Gareth Southgate’s tremendous success with England, there aren’t that many one-off games that make it to this list. Southgate’s teams and their calm progress through tournaments are all about stringing together lots of good games rather than producing the occasional brilliant (if often heroically doomed) one. Even the occasional thumpings they dish out are against Only Iran or Only Panama, while serene 3-0 wins in big games have been normalised to a frankly outrageous degree.

But if England are still in the World Cup by Sunday morning then it’s probably safe to say there’s a new entry somewhere near the top of this list.

For reference ‘our lifetimes’ means the 1982 World Cup onwards and ‘finals performances’ means World Cups and Euros but not Le Tournoi or Nations League or anything else.

10) Croatia 2-4 England – Euro 2004
England qualified for the knockout stages of a European Championship for the first time on foreign soil with a display that left much to be desired defensively but so much more to be admired.

In fairness, this was the golden generation. James, Neville, Terry, Campbell, Cole, Beckham, Gerrard, Lampard, Scholes, Owen, Rooney – that side should have been blowing opponents away. And despite going behind and conceding later from another set-piece, that is almost what they did to Croatia.

Wayne Rooney bagged a couple following his brace in the previous game against Switzerland to become the tournament’s top scorer, with Paul Scholes and Frank Lampard getting themselves on the scoresheet too. The victory set up a quarter-final meeting with hosts Portugal, which saw England suffer a familiarly heart-breaking defeat with all the usual ‘disallowed goals’ and ‘f**king b**tard penalties’ trimmings.

9) Colombia 0-2 England – 1998 World Cup
“Now Owen’s scored, there’s going to be only one winner here,” said Kevin Keegan on ITV during England’s second group match in France. His optimism, not for the first time, was misplaced and Romania earned a last-gasp win to leave Glenn Hoddle’s men in a shoot-out with Colombia to reach the last 16.

Hoddle had so far resisted the urge to start Michael Owen and David Beckham together, with Beckham being accused of a lack of focus by the England boss. So, of course, the Manchester United midfielder proved him wrong with a superb performance crowned with his first international goal – a trademark 25-yard set-piece on 29 minutes which was the first free-kick England had ever scored at a finals tournament.

Darren Anderton’s opener ten minutes before was quite a strike too. In the end, Colombia were grateful to keeper Farid Mondrago for keeping the score down. “I’m absolutely delighted with that performance,” Hoddle said. “We really could have won by four or five goals.” Their next performance wasn’t bad either. But…

8) England 2-2 Argentina – World Cup 1998
‘Who knows if England would have overthrown the feared Argentinians had David Beckham not been sent off through a mixture of his suicidal petulance and over-reactive refereeing?’ asked the Daily Mail’s match report from St Etienne. ‘But what no-one can deny is that they were playing thrillingly enough to make their dream quarter-final with Holland a distinct possibility.’

Indeed it was a performance and a match that had a bit of everything. Two goals inside the opening ten minutes as each side exchanged penalties; a wonder goal from wonderkid Owen, who rounded the world’s deepest ever defender before blasting high into the net; a clever set-piece to equalise – all that was in the first half.

The second half began badly for England and worse for Beckham. His red card for reacting to Diego Simeone’s foul provoked hanging effigies and death threats. But his team-mates did all they could to bail Beckham out, with a backs-to-the-wall display that was crowned by Sol Campbell’s late headed winner – until the ref got involved.

Penalties came and penalties went precisely as we had come to expect. David Batty and Paul Ince missed, but Beckham was the fall guy on the night Owen truly announced himself on the global stage.

7) England 3-0 Poland – 1986 World Cup
Bobby Robson’s England were in the mire going into their third and final group 6 clash with Poland in Monterrey. They had lost their opener against Portugal and been held to a goalless draw by Morocco, with Bryan Robson carried off and Ray Wilkins sent off.

“England will be playing 4-4-f*cking-2,” said Robson – perhaps – as he tweaked his formation, ditching 4-3-3. It paid immediate dividends with Gary Lineker netting a first-half hat-trick as ‘England soared into the second phase of the World Cup with an exhilarating display of attacking football’, according to the Football Monthly report.

The victory left Robson in defiant mood: “People can say what they like about me, but never ever accuse my players of lacking character. This was a phenomenal performance given the pressure they were under. Phenomenal!”

6) Argentina 0-1 England – 2002 World Cup
After the manner of England’s defeat to Argentina in France, the two nations were absolutely destined to meet again four years later. It’s how football and its f*cked-up sense of humour works.

The Three Lions, and Beckham, had their revenge in Sapporo. The skipper smashed in the winning penalty just before half-time after Owen hit the deck in the vicinity of Mauricio Pochettino’s leg.

‘They outplayed the team who had come into this tournament as favourites. England defended with supreme discipline, passed and moved with wit in midfield and attacked with intensity,’ proclaimed the Daily Express, while Paul Scholes’ nine-out-of-10 display was hailed as ‘the greatest of his career’ by The Times. It got worse for Argentina when they failed to qualify from the group. Which was nice.

5) Germany 1-1 England – Euro 96
Urgh. Football was coming home until it was grabbed off the street, bundled into the back of a van and smuggled back to Germany.

Before the penalty heartbreak, England gave a performance of typical spirit and fight. The Germans were certainly a match for Venables’ men though they struggled to live with the grey-shirted Three Lions in the opening stages, with Paul Ince’s volley being acrobatically saved before Alan Shearer headed in an opener with only five minutes on the clock. Germany recovered their composure, though, and levelled through Stefan Kuntz on 16 minutes.

Extra-time arrived and both sides went for the Golden Goal. Anderton hit the post and Paul Gascoigne was inches away from Shearer’s cross when, even today, you expect Gazza to toe it in. When penalties arrived, the first ten were perfect. Then Gareth Southgate stepped up…

“If somebody told me you are going up to heaven and you can take one game with you, I think I would take that England game,” said Barry Davies after talking the public through it for the BBC. “I’d try to get the result changed when I got up there, though.”

4) England 1-1 Germany – 1990 World Cup
Italia ’90 was the best or worst tournament ever, depending on who you listen to. The Three Lions’ performances also lurched between extremes, from their opener against Republic of Ireland after which La Repubblica asked ‘Is this all there is to England?’, to the semi-final against Germany which Andreas Brehme declared “a fantastic match involving two great teams – it was the final before the final”.

After a last-gasp win against Belgium and a couple of penalties to squeeze past Cameroon, England’s luck ran out in Turin. “We hit the inside of the post, they scored a really lucky goal and we lost on a shoot-out,” said Gary Lineker, which sums it up perfectly.

Germany progressed to the final after being pushed all the way for 120 minutes. What if Bobby Robson’s men had triumphed in the shoot-out and gone on to face Diego Maradona and Argentina again. “Would England have beaten them?” Brehme pondered. “Definitely, 100 per cent.”

3) England 2-0 Germany – Euro 2020
And numbers four and five are why this is a) Southgate’s only entry so far in England’s top 10 of the last 40 years and b) so high up the list. The one lingering borderline valid criticism of Southgate’s tournament record with England was their failure to beat anyone decent when the chips were most assuredly down.

Obviously this game did nothing to change anyone’s mind because these are the 2020s and nobody changes their mind because that would open a right can of worms that it is in everyone’s interest to avoid. What happened instead was Germany – actual, literal Germany! – were instead downgraded to ‘not all that’ as a team to beat in a knockout game at a major tournament. Never mind reaching a semi-final and a final in successive majors, this was perhaps Southgate’s crowning achievement. He forced a nation to do something that decades of disappoint had hardwired them against: he forced people from England to write off the Germans.

Now, it’s also true that this wasn’t the greatest German side of all time. They struggled through the group stage in 2021 in between shambolic and hilarious exits at the same early stage of successive World Cups. But they were still Germany and England were still England. And in a cagey, cat-and-mouse kind of game England were the better side and finally made that superiority tell with goals in the final 15 minutes from Raheem Sterling and Harry Kane.

It was England’s first win over Germany in the knockout stage of a major tournament since the 1966 World Cup final. There were four tournament hoodoos hanging over England when Southgate took the reins: winning on penalties, beating the Germans, reaching a final, winning a tournament. Three down, one to go…

2) France 1-3 England – 1982 World Cup
‘Cracking Start! Both the result and the performance made it England’s most promising start to any European or World Cup tournament for many years,’ enthused Football Monthly after England, without Keegan and Brooking, began their Spain ’82 campaign by beating a France team containing Platini, Giresse and Tigana.

Their tournament was only 27 seconds old when Bryan Robson volleyed in an opener for what was then the fastest ever goal at a World Cup finals. France levelled in the first half but Robson netted again midway through the second period before Paul Marriner sealed victory by scoring his fifth goal in consecutive internationals.

Ron Greenwood’s men went on to win all three first group games before remaining goalless in both second group phase games against Spain and West Germany. It meant England returned home undefeated. ‘English fly home with their heads in the air’ read The Times, and ‘England out with honour intact’ said The Guardian, which was a decade before England managers were being portrayed as turnips on the front page of national newspapers.

1) England 4-1 Netherlands – Euro 96
Football was due home in 1996, and though it was eventually caught in a 22-year delay – presumably football travelled by Northern Rail – it felt like the journey was almost complete when England turned in what many considered to be their finest performance since 1966.

The euphoria possibly misted a few memories because though the Three Lions led at half-time thanks to Shearer’s penalty, Netherlands were coming on strong. “England really need half-time here,” said Barry Davies after the Dutch won their eighth corner. But after the break, Terry Venables’ side blew away their opponents with three goals in 11 minutes, Shearer’s second, sandwiched by a brace from Teddy Sheringham, being the highlight after a move involving his strike partner which was orchestrated by Gascoigne.

England even had time to allow Patrick Kluivert a goal which did for Scotland’s hopes of reaching the knockout stages – “the cherry on top” according to David Seaman, the man who conceded it. But regardless of whether it was a deserved consolation, as Venables put it: “We thrashed them. There’s no doubt about it.”