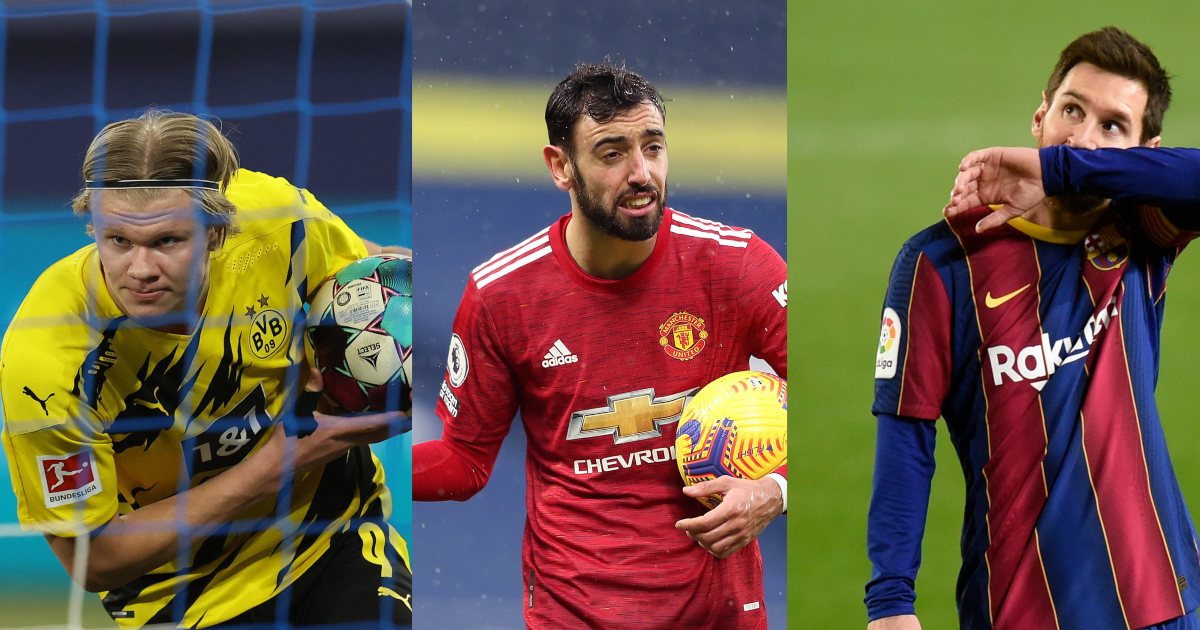 We’re talking top five leagues and we’re talking goals and assists in all competitions. No room for Cristiano Ronaldo (he’s 11th) because this is the top ten…

10) Jadon Sancho, Borussia Dortmund (6 goals, 6 assists)
So much for Sancho having an off-season and Manchester United deciding that the form of Mason Greenwood (1 goal, 2 assists) means that they need no longer play transfer games with Borussia Dortmund. Thank God they decided to dodge this transfer bullet, eh.

Jadon Sancho is the youngest player in Bundesliga history to reach 35 goals 💥 pic.twitter.com/Jnqw1b1BHt

9) Duvan Zapata, Atalanta (7 goals, 5 assists)
A massive blow for Atalanta v Real Madrid as Zapata was forced off the pitch after just 30 minutes on Wednesday night. He has been in wonderful form along with Luis Muriel as Atalanta have scored 25 goals in ten Serie A games in 2021 as well as reaching the Coppa Italia final after blowing Napoli away.

8) Bruno Fernandes, Manchester United (8 goals, 4 assists)
The Bruno Fernandes team definitely needs a new idea and some people would even argue that United are being held back by their talisman because some people have lost their mind. Fernandes remains United’s best chance of finishing second in the Premier League and advancing further than the semi-finals elsewhere.

Bruno Fernandes put on a midfield masterclass against Real Sociedad 👏

7) Ilkay Gundogan, Manchester City (9 goals, 3 assists)
A deeper role against Borussia Mönchengladbach reaped no scoring or assisting reward, but the German has been a revelation since Manchester City turned around their form in mid-December.

Ilkay Gundogan is the top scorer in 2021 at Anfield, the Etihad Stadium and the Hawthorns.

6) Andre Silva, Eintracht Frankfurt (9 goals, 3 assists)
Signed for just £2.7m in September, the German club may now sell Andre Silva to Manchester United for £30m after the Portuguese defied all expectations to race to 18 Bundesliga goals this season. His form in 2021 has helped take his club from mid-table to fourth in the table, though he missed the weekend’s historic win over Bayern Munich.

5) Robert Lewandowski, Bayern Munich (10 goals, 2 assists)
Wow. The Pole has scored in all but one of his Bundesliga games in 2021, taking him to a barely believable 26 goals from 21 top-flight games this season. He even threw in a goal against Lazio as they were destroyed in the Champions League this week. He is now 32 but remains a truly extraordinary machine.

4) Luis Muriel, Atalanta (8 goals, 5 assists)
The Colombian is not even a regular starter for Atalanta; his 13 goal contributions in 2021 have come in just 718 minutes. That’s a contribution every 55 minutes of football, maths fans. He was hauled off after just 56 minutes against Real Madrid on Wednesday night, obviously.

3) Erling Haaland, Borussia Dortmund (10 goals, 4 assists)
There’s a reason Chelsea owner Roman Abramovich is reportedly prepared to pay all of the money to sign the Norwegian this summer. He is still just 20 years old. The bad news for Dortmund is that they are in danger of failing to reclaim Champions League football despite having two of the best 20-year-olds on the planet. Their only option might be to win the damned thing.

2) Antoine Griezmann, Barcelona (7 goals, 8 assists)
The numbers are skewed by the Copa Del Rey and the Supercopa; when PSG came calling, the Frenchman was among Barcelona’s worst performers, missing one big chance and doing very little else of note. Oh and how did he miss from there?

📸 – Griezmann with a big chance to make it 4-0 but he hits the bar. pic.twitter.com/iD7Frr4sKx