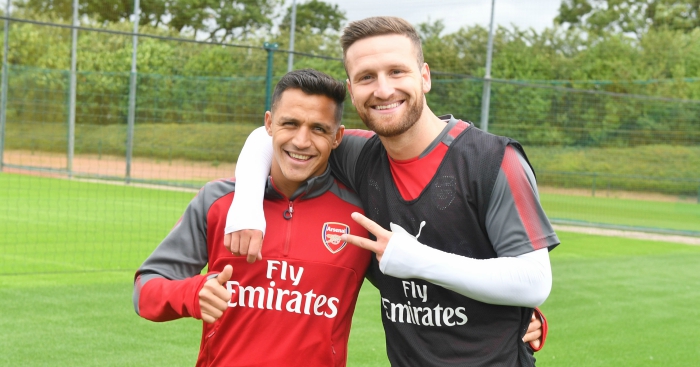 10. Shkodran Mustafi
“You like to get the sh*t, the biggest sh*t,” was the response Shkodran Mustafi offered when asked how close he came to leaving Arsenal in the summer. The German’s frustration was understandable: he had just scored and played wonderfully in an emphatic victory for the Gunners over their bitter rivals. It was not the time to discuss the finer details of the past.

But the fact remains that, had the planets aligned, Mustafi would not have been near the Emirates Stadium to plant a header beyond Hugo Lloris, nor silence Harry Kane and Dele Alli. Both Mustafi and Arsene Wenger may preach that selling the player was never part of the club’s plans, but David Ornstein says otherwise. And we would believe David Ornstein about Arsenal if he reported that they were 13-times Champions League winners, played in neon turquoise and were owned by Zurab Khizanishvili.

“What will happen on the transfer market in the next three to four days I don’t know,” Wenger replied when asked whether he was willing to sell Alex Oxlade-Chamberlain after the 4-0 defeat to Liverpool in August. When asked about Mustafi, the response was equally non-committal: “Similar question, similar answer.” And thus “the biggest sh*t” was left festering for months before his crowning performance this weekend.

9. Yohan Cabaye
In the vacuum of football news that is the summer transfer window, even the most innocuous comment can illicit a near-cataclysmic reaction. A Twitter ‘like’ becomes a ‘hint’, an Instagram comment becomes a ‘reveal’, a Myspace friend request becomes a ‘dig’.

For Crystal Palace this past summer, that effect was magnified through weeks of inactivity as a restless fanbase scrawled and scratched around for any possible rumour, viable or otherwise. So when Yohan Cabaye had the temerity to reply to a comment from the departed Steve Mandanda on social media, the rumour mill went into overdrive. Suggestions of a move to Marseille surfaced, and supporters resigned themselves to losing their former most expensive player.

Cabaye stayed, and while Palace have struggled, his importance cannot be understated. He has had the second-most shots, made the most passes, created the most chances and completed the fourth-most tackles. You don’t mess with the Yohan.

8. Moussa Sissoko
Mathieu Debuchy, Eliaquim Mangala and Morgan Schneiderlin had better watch out, because Marseille have developed something of a taste for middling French Premier League players. After signing Mandanda and courting Cabaye, the Ligue Un club soon turned their attentions to Moussa Sissoko.

Tottenham likely harboured plans to sell their most expensive player ever, but Mauricio Pochettino would explain in September that “maybe that possibility didn’t exist”. Everton, West Brom and a raft of Chinese Super League clubs were among those linked with a move, but none would have viewed his first season at White Hart Lane and decided that £30million – enough for Spurs to recoup their money – was a sound investment.

So Sissoko stayed, and while he is not a key member of the first team, he is a valued asset in the squad. The 28-year-old has more minutes in all competitions than Heung-min Son, and was part of a midfield trio who took a point from Real Madrid at the Bernabeu, before helping defeat the Spaniards at Wembley.

7. Steven Defour
It was only after Sean Dyche’s gruelling ‘Gaffer’s Day’, when the manager has players run for two hours to gauge their fitness levels ahead of the new Premier League season, that Steven Defour made clear his commitment to the Burnley cause. “I think on Gaffer’s Day, that was a moment, because I got really good numbers and that’s when he said, ‘Look. You can do it’,” said the midfielder in September. “Maybe that’s what I missed last time – a good pre-season, a Burnley pre-season… which is different. I’m taking advantage now.”

Only a fool would argue. The 29-year-old started 16 Premier League games last season, failing to complete a full 90 minutes. This campaign has been a complete transformation: He has started all 12 games for a side level on points with Arsenal and Liverpool, and has even gone the distance in six matches. This is what Gaffer’s Day does to a grown man, folks.

6. Riyad Mahrez
“I did try to call him but it was an international dialling tone and I wasn’t quite sure where he was,” said Craig Shakespeare in September. “I would have suggested he was at an airport somewhere.”

Between them, the former Leicester manager and the Algerian national team managed to fan the dying embers of the Riyad Mahrez transfer fire. The winger had failed in his first attempts to leave the King Power Stadium in summer 2016 and then winter 2017, but pursued the hat-trick and renewed his efforts once more with the best wishes of the Leicester management.

The only issue was that no-one could find a home for Mahrez, who fluttered his eyelashes at Arsenal, Chelsea, Manchester United, Paris Saint-Germain, Roma and elsewhere. Leicester would have been happy for the extra £40m, but are instead left with a player who has the joint-most Premier League assists (5) of any non-Manchester City player this season.

5. Ashley Young
In an article headlined ‘Manchester United players likely to leave in summer transfer window’, the Manchester Evening News predicted the potential Old Trafford summer departures of six players. Wayne Rooney, Adnan Januzaj and Bastian Schweinsteiger all subsequently met their respective demises, while Luke Shaw remains in painful limbo. Matteo Darmian will stay in the north-west until he learns how to boil an egg, which leaves one Ashley Young.

‘Young will have a year remaining on his contract in the summer transfer window and United are understood to have promised him they will be more accommodating over a possible move then,’ wrote Samuel Luckhurst in that article in March, and yet the 32-year-old is firmly entrenched in the first team eight months later. One of the top ten English players of the season has been revitalised.

4. Alexis Sanchez
Having spent the entire summer insisting that Arsenal would not even consider selling Alexis Sanchez, Arsene Wenger could not have had a more dramatic change of heart if he had undergone a transplant. In the final week of the transfer window, if not the final days, the Frenchman chucked a ‘For Sale’ sign on his biggest asset in a haphazard panic.

Wenger would describe the decision to keep Sanchez as “a financial sacrifice”, but admitted in that same September interview that Arsenal had chosen to bite the Sanchez bullet with Manchester City circling: “When you decide to let a player of that calibre go you need to replace him because nobody would understand that you let the player go.”

It was an embarrassing climbdown, with Arsenal trying to paint as a positive the fact they had kept their most saleable goods despite attempting to flog them before closing time. As it happens, all three parties are perhaps better off that Sanchez remained at the Emirates Stadium. Next summer may be a different matter.

3. Fabian Delph
The starting left-back for the Premier League leaders was almost competing for a place against Darren Fletcher and Joe Allen for the team in 15th. “He’d have come here as a midfielder,” said Mark Hughes last month, playfully adding: “I think Pep likes midfield players. I think he’d play a midfielder in goal if he could – he wants them all over the pitch!”

Delph found himself at a crossroads in the summer, having started ten Premier League games in two seasons at Manchester City under two different managers. The 27-year-old could leave for regular first-team football elsewhere, or stay at the Etihad Stadium and take his chance that he would be needed at some point by Guardiola.

The 27-year-old would have passed on his deepest sympathies to Benjamin Mendy when the left-back suffered a long-term knee injury earlier this season, but Delph must have been doing celebratory backflips somewhere in the deep recesses of his mind. One man’s trashy luck has been another man’s unexpected treasure, and the career renaissance has been remarkable.

2. Oumar Niasse
Oumar Niasse deserves every plaudit for proving what he has in his locker this season, considering Ronald Koeman did not even afford him that courtesy last campaign. “I’m in the dressing-room with the under-23s but I don’t have a locker,” said the striker last October, having also been stripped of his shirt number after one 45-minute appearance in pre-season.

Like the bullied schoolkid turned successful businessman encountering his former tormentor selling copies of The Big Issue on the street, Niasse remained humble even when Koeman was at his lowest ebb. “I feel sorry for him, what happened to him when the club got rid of him,” he said. “Honestly, they were ready to let me go,” the 27-year-old would continue. “I was ready also to go because I knew that it would be a difficult season if I stayed here but at the end I didn’t go.”

David Unsworth must be thanking his lucky stars he didn’t. Seventeen Everton players have more minutes to their name in all competitions than Niasse’s 410, and yet none have scored more than his six goals. Only ten players have more goals in the Premier League this season than his five, while only Sergio Aguero (75.6), Anthony Martial (75.2) and Peter Crouch (51) have a better minutes-per-goal ratio than his 75.8.

1. Alberto Moreno
As the winner of two Bundesliga titles, a manager of over 700 games across three clubs and two countries, a former Champions League finalist and a man who once signed Steven Caulker, Jurgen Klopp has surely seen it all. And yet not even the German has witnessed a turnaround as dramatic and unexpected as that of Alberto Moreno.

“I never had something like this, I never had it to be honest,” an incredulous Klopp said earlier this week, discussing the resurrection of an Anfield career thought to be dead. The 25-year-old started just two Premier League games last season, coming in the 4-3 win over Arsenal and 4-2 win over Crystal Palace, when Liverpool’s attack twice bailed out a porous defence. He played 295 league minutes across 12 appearances last campaign; he has 900 minutes across ten games this.

Moreno starred in a 3-0 victory over Southampton on Saturday, November 18. On Saturday, November 19 of 2016, Liverpool had also faced Saints, but Moreno was on the bench behind makeshift left-back James Milner. Liverpool have signed actual left-back Andrew Robertson in the interim, and yet Moreno has somehow regained his place. In the space of 365 days, he has transformed from forgotten man to key figure.

Football is a weird game. Imagine being told at the start of the season that by November, Alberto Moreno, Fabian Delph and Ashley Young would be the 3 best left-backs in the Premier League.