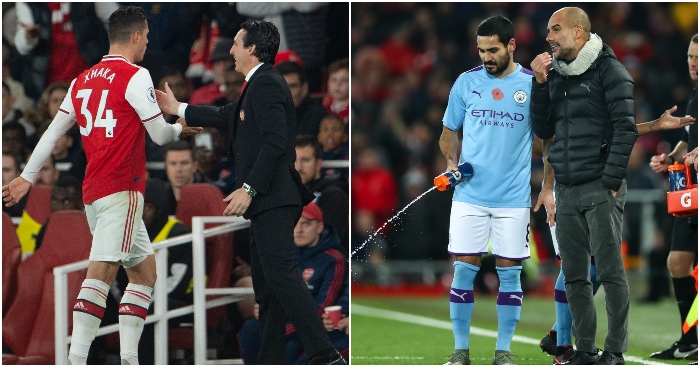 10) Javi Gracia not addressing Watford’s problems
The warning signs were there at the end of last season. The FA Cup final was a distraction away from some wretched form down the Premier League home straight, with Watford winning only two of their last nine games and those victories came against relegated sides.

They conceded nine in their last three Premier League matches before giving up six to City at Wembley. In Gracia’s final ten league games in charge, his side conceded 20 goals, with the anti-climax of a bottom-half finish not being lost on Watford’s owners. When it had become apparent that little had changed, especially while he appeared reluctant to use Watford’s summer signings, Gracia was gone.

Quique Sanchez Flores made it his priority to tighten Watford up when he came in, which tells you where Gracia was going wrong. Yes, the Hornets took a while to catch on but a five-man defence appears to be making a difference. It’s all about the corridors, you see: “After the draw against Arsenal, after losing against City, after losing against Wolves and analysing them is that the corridors in defence were really easy for the other teams. We didn’t know how to defend the corridors.”

9) Daniel Farke failing to sign a centre-back
“Not so many teams in world football have to accept three long-term injuries to centre-backs,” said Farke earlier this month in response to a question about Norwich’s lack of depth proving costly. “If we would have known before the transfer window was closed that there would be three long-term injuries we would have done something, but you can’t prepare for this.”

Well, you can. And the issue over Norwich’s recruitment isn’t just over addressing a lack of depth but also quality. Did Farke really feel that his defence needed no reinforcements for the Premier League?

“We will never have the possibilities of the settled Premier League teams,” added Farke, a few days after Norwich announced that they expect to make a significant profit. Perhaps there is some truth in that statement, but the loan market shows there is more than one way to skin a cat.

8) Brendan Rodgers playing conservatively against the big boys
Leicester can take on anyone in the Premier League, though their potential to upset the big boys may come down to how much they really believe in their capability.

The Foxes have lost two matches this season and drawn their opening two. Their two defeats came at Anfield and Old Trafford where, with a little more self-belief, they could have salvaged at least a draw.

Against United and in their first road trip of the season at Chelsea, Brendan Rodgers has used a third central midfielder which has the knock-on effect of pushing James Maddison into a wider position. Against a Chelsea side reeling from being beaten 4-0 at Man Utd, and a United side just reeling, there was no reason to be quite so conservative.

Rodgers appears to have learned his lesson. At home to Spurs and Arsenal, there was no such conservatism.

7) Ole Gunnar Solskjaer playing Jesse Lingard and Dan James at centre-forward
It was no secret that Ole Gunnar Solskjaer wanted rid of Romelu Lukaku and Alexis Sanchez in the summer. His reasoning was sound too. The only mistake was Manchester United failure to recruit a replacement for either striker.

Anthony Martial started the season at centre-forward and he made a decent fist of his opportunity before being struck down by an injury. When Marcus Rashford struggled to lead the line, Solskjaer had nowhere else to go, aside from Mason Greenwood.

But despite being the ‘best finisher at the club’, Greenwood remains without a Premier League start this season. Instead, in Martial’s absence and Rashford’s struggles, Solskjaer has turned to Jesse Lingard, the lad without a Premier League goal or an assist seemingly since the dawn of time. At West Ham, the enforced experiment failed miserably, but not bad enough to deter Solskjaer from playing Dan James through the middle against AZ Alkmaar despite the presence of Greenwood in the XI.

6) What Ralph Hasenhuttl said before and after being battered by Leicester
Whatever the Southampton manager told his players prior to hosting Leicester, it obviously did not work. He told the media: “It’s time for a win at home. It is time to show that we as a club are committed and it must be difficult for opponents to get anything at St Mary’s.” A day and nine goals in Angus Gunn’s net later, Saints were staring at the biggest home defeat ever in the Premier League.

Hasenhuttl’s reaction to his players’ abject surrender: “I must apologise for this performance. I take 100 per cent responsibility for what happened today.” Why? Why must players be shielded from public criticism at all costs? If ever there was a time for some home truths, it must be after conceding nine at home. It makes a mockery of the occasions Hasenhuttl genuinely feels that his players deserve defending.

Laying himself down before his players does not appear to have done much good. Saints were beaten twice at Man City when they were just relieved to avoid a similar humping. But then they were outclassed by an Everton side whose manager is on similarly thin ice.

5) Manuel Pellegrini picking Roberto to keep West Ham’s goal
To be fair to Pellegrini, perhaps he didn’t choose Roberto at all. It seems the 33-year-old was signed in the summer on a free on the recommendation of director of football Mario Husillos, who worked with the keeper at Malaga, one of the keeper’s nine previous clubs. Which perhaps tells its own story.

Pellegrini might well be wondering what the f*ck Husillos was thinking. Since coming into the West Ham team to cover for Lukasz Fabianski last month, Roberto has looked every bit a goalkeeper who hadn’t started a league game for 18 months.

No one can pin all West Ham’s recent woes on Roberto but neither can you put their decline since he came down solely to coincidence. His nervousness has spread throughout a team which has conceded 12 goals in five-and-a-half games since he replaced the Pole in goal.

4) Mauricio Pochettino d*cking around at right-back
The Spurs boss has made a few mistakes this season. Pochettino has been willing to play a number of players who clearly do not believe their future lies with the club, but since none of Christian Eriksen, Danny Rose, Toby Alderweireld and Jan Vertonghen could wangle themselves a move in the summer, the manager has little choice but to integrate them into his squad.

At least Spurs were active in the summer, with Tanguy Ndombele and Giovani Lo Celso addressing different weaknesses in central midfield which should pay dividends in the long term. But Pochettino, or rather those above him, failed to fill another hole at right-back, one that was made even more sizeable by Kieran Trippier’s exit to Atletico Madrid.

The contrast between Trippier’s rejuvenation and Spurs’ struggles on the right hasn’t helped Pochettino. Nor has Juan Foyth’s injury. The suspicion is that Pochettino wanted to turn Foyth into a right-back because the Argentina international is unconvincing in the centre. But since Foyth has been crocked, Pochettino has used four players at right-back, including another player who wanted away in the summer, Serge Aurier,

A right-back, or the lack of a competent one, is perhaps not top of Pochettino’s list of concerns. But it is a problem that is unlikely to go away without decisive action.

3) Marco Silva failing to sign a centre-back
There’s a theme developing here. Again, this one might not be entirely Silva’s fault, but you can bet it will be the Everton manager who carries the can for their summer failure.

Silva has been clinging to his job, having survived at least two matches which appeared to be win or bust. When he looks around his team, Silva will know that the weakness in the centre of his defence is the biggest factor in his fight to retain gainful employment.

Everton waited for weeks for a decision over Kurt Zouma before Chelsea chucked them a custard pie, before eventually deciding that any of Man Utd’s cast-offs would do for a season. But United wanted cold, hard cash for both Chris Smalling and Marcos Rojo so Silva has gone without.

“We start with three central defenders [Michael Keane, Yerry Mina and Mason Holgate],” Silva said between the window closing and the season opening. “It is what it is and we have to deal it with the best way. If you ask me if it is a risk, then yes it is.” It was always a needless risk with little prospect of any reward.

2) Unai Emery naming Granit Xhaka as his captain
“The captaincy… I don’t think it’s very important,” said Sokratis last week. For something that doesn’t matter that much, the armband has certainly caused Unai Emery a lot of unnecessary grief.

It was up for grabs after Laurent Koscielny decided he didn’t want anything to do with that or Arsenal in summer. So rather than Emery decide upon who he wants as his representative in the team, the Gunners – or rather their psychologist David Priestley, if the Mirror is to believed –  decided to let the players decide.

Xhaka came out on top in the poll to find the shiniest turd. Only the Arsenal players can tell you why they chose the Switzerland midfielder when no one else around the club seems to like him, let alone rate him. This is the leader of men who admitted his side were scared at Watford. Bottom of the table, winless Watford.  Of course, it all came crashing down when Xhaka reacted to being jeered when his number went up against Palace. The player and those who jeered him have done their best to paint themselves as the wronged party when everyone should just grow the f*ck up. But this is Arsenal, where the selection of Pierre-Emerick Aubameyang as Xhaka’s replacement is already coming under scrutiny from the dressing room.

But it’s ‘not very important’, apparently.

1) Pep Guardiola’s defensive set-up at Anfield and the wider reasons for it
It may be that Pep Guardiola was screwed however he tried to solidify Manchester City’s flaky defence ahead of the crucial trip to Liverpool. He could reinforce the centre by playing full-backs deep and tight to their central defenders; or he could have pushed the full-backs further up to deal with their Liverpool counterparts.

He chose the former, presumably in the hope that City could deal with crosses when they arrived since they had numbers in the box. But among the City ranks there is not a centre-back you would trust to cope with the delivery of Trent Alexander-Arnold or Andrew Robertson. Hence why Angelino and Kyle Walker never strayed beyond the width of the penalty area.

Of course, the problems can be traced back, not to Aymeric Laporte’s injury, but the decision in the summer not to spend big – or at all – on a replacement for Vincent Kompany. Guardiola liked Harry Maguire among others but City did not see fit to buy a centre-back despite being severely depleted. The regret is unlikely to subside until at least next summer.