While rookie managers are in place at big Premier League clubs, this lot are free... 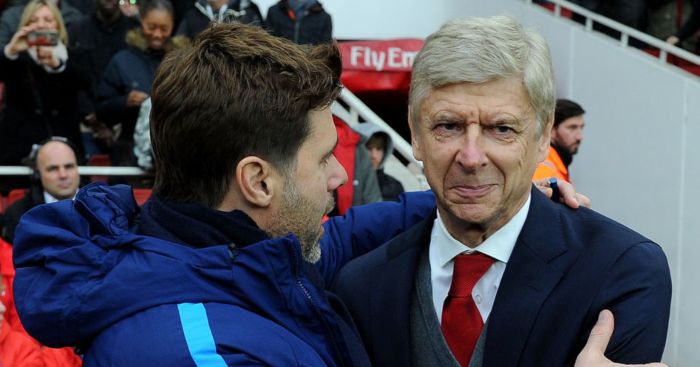 While rookie managers are in place at big Premier League clubs, Mauricio Pochettino is waiting patiently for his next chance…

10) Laurent Blanc
Let’s journey back to March 2016 and discussions about a potential new Manchester United manager being dominated by talk of Jose Mourinho, Mauricio Pochettino or (give it to) Giggseh. Robbie Savage had another suggestion – his best friend Mark Hughes – and we laughed, because we were living back in those golden days when managers preferably had more on their CV than ‘knows the club’.

A caller to Savage’s phone-in suggested Laurent Blanc; he laughed and barked “what’s he ever won?”, failing to see the irony of his own suggestion. Obviously the caller was barely allowed an answer but he could have replied “well, he is well on his way to ten domestic trophies, several of which came at Bordeaux, which suggests he is not merely a coach of excellent, expensive players, Sav”.

There are question marks about his management of egos and also his tactical excellence, but we are living in strange times and they now seem like mere details.

9) Sam Allardyce
Grab yourselves a pint of wine and imagine Allardyce back in the Premier League with Aston Villa or West Brom, who both failed to give him playing contracts when he was a local, young, physical centre-half, long before centre-halves were required to be ‘cultured’. Even at 65, he would relish the chance to spar once again with managers little more than half his age; you would argue that four or five teams in the Premier League would have their chances of survival enhanced by Big Sam and his pragmatism.

Allardyce is oft-derided as a dinosaur – and certainly does himself no favours with his ‘if I were called Sam Allardici’ nonsense – but he is undoubtedly an effective Premier League manager who can organise and motivate. Add a sprinkling of magic and his teams can even entertain. The dream scenario is that he attempts to revive his career in the Netherlands and returns with a Midlandsh twang.

That is the astonishing Monaco XI that beat Manchester City to advance to the quarter-finals of the Champions League. Add Joao Moutinho, Radamel Falcao and Kamil Glik and you have the core of a brilliant young side that won Ligue Un and has since been asset-stripped to leave only two of that collection of players still at the club. It’s little wonder that Leonardo Jardim – who led that exhilarating side to glory – struggled when he returned to try and clear up the mess left by Thierry Henry last season. Never, ever go back.

7) Marcelino
Over the last five seasons, Valencia have finished 12th, 12th, 4th, 4th and 9th. The man in charge for those two fourth-place finishes was Marcelino. Before that, he led Villarreal to promotion, three top-six finishes and a Europa League semi-final defeat to Liverpool. The man has pedigree.

He also has a clearly defined style – pace on the wings in a 4-4-2 – that could work excellently in the Premier League, and we are inevitably thinking West Ham here. Obviously he would attract the usual criticism for not being fluent in English, but he crucially appears to be rather good at this football management lark.

For West Ham, have to imagine they go after Marcelino or Jardim. Had they made the move earlier, could they have enticed Ancelotti?

6) Luciano Spalletti
Explosive and incendiary, Spalletti creates football teams in his own fiery image, which makes him and his football intriguing to watch. There has been some truly fantastic football played by Roma, Zenit and Inter Milan under his watch, but he will fall out with players, the media and management as he runs through the whole gamut of emotions on a weekly or even daily basis. It’s not unusual to see him banging his head on the table during press conferences in frustration.

But the man produces results – Udinese reached the Champions League under Spalletti, who was twice voted Serie A Coach of the Year for leading Roma to back-to-back-to-back second-place finishes. He could yet return there for a third spell.

Fonseca might as well step down. I hope Spalletti, Allegri or Sarri are ready to go.

5) Maurizio Sarri
Seen as an oddball, an outsider and a rigid tactician, there seem to be few who warm to Maurizio Sarri among fans, players or the media. But it’s difficult to argue with his transformation of Napoli into title contenders, his delivery of silverware and Champions League football at Chelsea and his Serie A title at Juventus.

There will always be those who argue that just about anybody could win the title with Juventus, though that theory is about to be tested by Andrea Pirlo, appointed as the romantic choice after a year under Sarri when almost nobody felt the love. Ronaldo did not like being given instructions by a socially awkward former banker, while other players complained that he was unapproachable. And the suspicion persists in Italy that Juventus won the title in spite of Sarri rather than because of him.

It all seems massively unfair as nobody accidentally manages two of the biggest clubs in Europe to silverware.

4) Ernesto Valverde
It’s a thankless task being a Barcelona manager. Triumph and everyone nods and says ‘well, when you have Lionel Messi’. Fail and everyone shakes their heads and says ‘well, you have Lionel Messi…’. Valverde’s blood was drawn by both sides of that particular sword, with long unbeaten runs and back-to-back titles being attributed to the Argentine, but costly Champions League defeat to Liverpool being put down to the manager, who was eventually sacked in January.

There is much to suggest that Valverde deserves rather more respect than he is afforded – he took Athletic Bilbao back into the Champions League and even won their first silverware in over 40 years. A trophy-laden spell in Greece suggests he could thrive outside of Spain, perhaps at a club where you get power over your own signings…

Ernesto Valverde will forever be the coach who gave a 16-year-old Ansu Fati his chance. pic.twitter.com/dywjrAN1NC

3) Arsene Wenger
Only as low as third on this list because it feels like an awful long time since he was a manager (it’s actually only two years) and the suspicion persists that at 70, he is too old to learn any new tricks at all. For a time, he was an extraordinary coach and he really did not deserve the opprobrium and mockery that came his way in later years, particularly from Arsenal fans who will surely see with hindsight that they were incredibly lucky to have their recent history intertwined with his.

2) Mauricio Pochettino
Still, he has won nothing. But Pochettino is yet to manage a club geared to win anything at all and we cannot truly judge him until he takes a job at a club that sees silverware as a minimum rather than a bonus. That he took Tottenham to a Champions League final should feel extraordinary given their history of not-quiteness and yet that achievement has been somewhat lost in the stagnation that led to their swift descent into mid-table and subsequent appointment of Jose Mourinho.

At their best, Tottenham were exhilarating, playing a brand of high-pressing, high-energy football that made them the neutrals’ choice, until a lack of investment took its toll and everyone simultaneously seemed too physically and mentally tired to play at that pace anymore. Still, Pochettino waits for another chance, which will presumably emerge when the current trend of appointing playing legends rather than actual managers comes to an end.

You know what fuck Dalot , if he never shot against PSG we’d have Pochettino or Allegri in charge and we would actually have a positive feeling for this season.

1) Massimiliano Allegri
You will rarely see anybody wax lyrical about the style of Allegri’s sides, but the man knows how to win Serie A titles, coaching defenders to organise and defend, midfielders to be disciplined and forwards to exploit the weaknesses of the opposition. If it sounds a little Mourinho then that’s probably why Allegri has been out of work for over 12 months.

But six Serie A titles in a decade – one of them with Milan, who have since turned into a basket case of a club – is an extraordinary record so it is even more extraordinary that he remains out of work, with clubs across Europe presumably unsure whether his style would translate outside of Italy. It’s telling that Inter Milan showed the strongest interest in him this summer, though it’s worth noting that Chelsea do love to appoint (and then sack) an Italian manager.