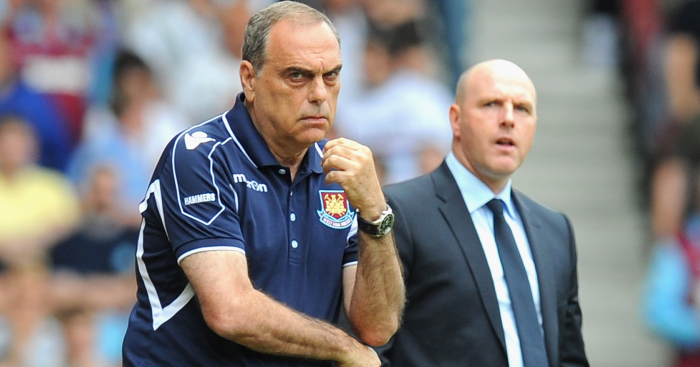 10) David Moyes
Many could see Manchester United’s reasoning in appointing David Moyes to replace Sir Alex Ferguson, even if few got taken in by the ‘Chosen One’ bullsh*t. But with that farce, and subsequent failures at Real Sociedad and Sunderland, his appointment at West Ham was rather harder to fathom.

Taking over from Slaven Bilic with the Hammers in 18th place, Moyes was offered a chance to re-establish his credentials, much to many fans’ bemusement. The carrot for keeping West Ham in the Premier League was the possibility of a two-year contract, and Moyes kept his end of the bargain, dragging them up to 13th. But supporter unrest continued and West Ham owners backed away from offering the Scot a two-year-deal, instead promising the appointment of ‘a high-calibre figure who we feel will lead the club into an exciting future’. Enter Manuel Pellegrinini, while Moyes looks around waiting for his next gig.

9) Claudio Ranieri
Claudio Ranieri is now on his third ‘final job’ having taken over at Roma, where he returns after failing to have any meaningful impact on Fulham’s miserable season back in the Premier League. The 67-year-old took over in November with the club bottom of the table; he was fired in February having gained only one place but generated little belief that the Cottagers could escape relegation.

The blame for Fulham’s woes don’t lie entirely at Ranieri’s feet but there is little in his work at Craven Cottage, or in his previous job at Nantes, to justify his reappointment at Roma – a club he left eight years ago – other than the fact that he is available and he already has a key.

That said, the last time Ranieri landed on his feet – when Leicester brought him back to the Premier League after 11 years away – it panned out rather well.

8) Alan Pardew
“We were impressed with what he had to say,” admitted West Brom chairman John Williams after falling for Pardew’s patter when he was interviewed for the job of replacing Tony Pulis on November 2017. He went before the Baggies’ board 11 months after being axed by Crystal Palace having won just six of 36 matches in 2016. Despite ratcheting up the charm, Pards couldn’t back up the bluster with results, with the Baggies winning just one of his 18 Premier League games in charge.

Of course, Pardiola had his excuse: the theft of a taxi by four of his players in Barcelona.

“It was damaging in so much that prior to that trip – which was meant to be a team-bonding trip – we had a fantastic result against Brighton and we had beaten Liverpool in the cup with their strongest team. Suddenly, I felt we were there. I thought we were going to make it really tight for everybody else.

“The players let themselves down, they let the club down and they let me down. From that moment forward, we never got results.”

7) Paul Lambert
“Paul greatly impressed us with his knowledge of our squad and had a clear plan of how he would improve our results,” said chairman Peter Coates after Gary Rowett, Quique Sanchez Flores and Martin O’Neill had already turned down Stoke.

Lambert certainly needed a decent interview because his CV didn’t carry much weight. His two previous positions were at the bottom of the Championship with Wolves and Blackburn, which came after Aston Villa sacked him before he could take them down.

Just told a Stoke fan I work with that they've announced Paul Lambert as manager and he literally put his hands on his head and said "mate, I'd rather you told me that my nan has died", so they're taking it well.

Lambert returned to his natural habitat, taking Stoke with him, when the Potters were relegated after two wins during his 15 games in charge. Stoke shuffled him aside before Lambert took over at Ipswich, of course, at the bottom of the Championship.

6) Ole Gunnar Solskjaer
It has turned out just swell, but Solskjaer was certainly a punt when United picked their former striker to take the wheel after Jose Mourinho’s dismissal. The Norwegian was a risk when Cardiff appointed him in 2014 with only the United reserves job and Molde on his CV, so having taken the Bluebirds down, he was even less qualified when Ed Woodward was looking for a caretaker.

Woodward could not have envisioned Solskjaer having such an impact or being quite so successful. Though few of the changes he has made have been complex or ground-breaking, it still takes a special individual to implement them. Not you, Paul Ince.

Some stories you just can't write…#WorldBookDaypic.twitter.com/0laGVhBYhE

5) Gary Neville
The former Manchester United captain certainly had a reasonable pedigree when he was appointed by Valencia in 2015, even if he lacked the basic Spanish to communicate with his players. Neville was appointed by Valencia owner Peter Lim, with whom he was a co-owner of Salford City, while club president Layhoon Chan said “it was his personal qualities which persuaded us that he was the right choice to lead Valencia”.

It can’t have been his CV. Despite winning almost everything there is to win at club level as a player, Neville was a managerial novice. He was England’s assistant manager, and he remained so during and after a four-month reign at the Mestalla that was cut short largely because of the language barrier between himself and his players and the media. His failure to communicate a tactical plan was clear from Valencia’s performances and results, which included only three wins in 16 La Liga matches and a 7-0 drubbing at the hands of Barcelona in the Copa Del Rey semi-final.

4) Joe Kinnear
After replacing Geordie icon Kevin Keegan with nothing on his CV to suggest why, you would think that Joe Kinnear might look to win a few friends. Nope.

Kinnear’s charm offensive continued before health concerns forced him to step away from Newcastle’s campaign, which was to end in relegation. Four years later, though, he was back at St James’ Park as director of football – a position he was equally unqualified for, despite his claims to the contrary.

3) Steve Kean
Never even on The Apprentice has a candidate kissed so much arse for a job. The first-team coach took over from Sam Allardyce in 2010, initially as a caretaker, then until the end of the season. Within a month, Kean had a two-and-a-half-year contract, negotiated by his agent, Jerome Anderson, who also happened to be advising Venky’s after their takeover of the club.

Within a year, Kean had secured a new contract with a pay-rise, despite Rovers sitting bottom of the Premier League at the time. The announcement of the deal also came days after Kean said: “I have told the owners that this is an inappropriate time to conclude any new contract discussions. Instead, the real issue is for me and everyone else to concentrate on the games.

“The fact that the owners have talked to me about a new contract means that they can see what we are building here, and we hope to make others see it too.”

Nope, literally no one did, despite Kean’s Comical Ali impression. Local MPs called for his resignation, with only Paul Ince’s record worse than Kean’s as Rovers boss. The Scot took Rovers down to the Championship and though even relegation didn’t cost him his job, Kean claimed he had been “forced to resign” the following September. He has since coached Brunei DPMM before taking a director of recruitment job at Greek Superleague side OFI Crete.

2) Dave Hockaday
Leeds fans can look back and laugh at Dave Hockaday’s 70-day reign, now they have a proper boss in charge. Everyone else didn’t bother to wait before splitting their sides at Massimo Cellino’s managerial punt and the chaos that followed.

Hockaday had been out of work since leaving Conference Premier side Forest Green Rovers by mutual consent nine months before he charmed Cellino in a London hotel in June 2014. “I seem to tick all the boxes,” said the 56-year-old in his first interview before admitting he’d landed on his feet: “At the end of the day I’ve been given a great opportunity and I intend to take it in both hands.”

You can’t blame the bloke for snapping Cellino’s hand off. In a rather less shocking development, Hockaday was sacked six games into his reign. What happened in the intervening 10 weeks was absolutely glorious.

1) Avram Grant
“We are delighted that in Avram we have an experienced man who can come in immediately at this difficult time to help deliver our objectives,” said Chelsea after the Israeli stepped into Jose Mourinho’s shoes in 2007. Define ‘experienced’.

Aside from a year as technical director, Grant hadn’t worked outside of Israel, where he was known as ‘Mr Jammy’ after dragging the national team to the brink of World Cup qualification on the back of a few lucky draws. Metaphorically, he wasn’t qualified for the Chelsea job, and nor was he in the literal sense.

His luck finally ran out when John Terry slipped in Moscow, otherwise he would have had a Champions League to stick on his CV in the absence of coaching licenses. He took jobs at Portsmouth, where their financial plight covered up Grant’s lack of managerial nous, which was abundantly clear the following year when he took West Ham down.