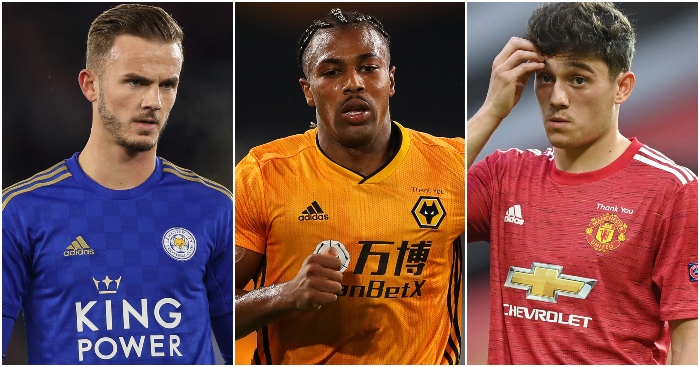 10) Ben Gibson (Burnley, £15m)
Sean Dyche equalled Burnley’s club record to take Gibson from Middlesbrough in 2018 but in two years at Turf Moor, the centre-back managed just six appearances and spent the second half of last season back in Teesside while he waited for the next opportunity to leave. Norwich have given Gibson that chance and, somehow, Burnley could get £8million of their money back should the Canaries make an immediate return to the top flight.

9) Daniel James (Manchester United, £15m)
Having seen a move to Leeds fall through at the last minute the previous January, James’ patience paid when he became Ole Gunnar Solskjaer’s first signing as Manchester United manager last summer. United reportedly paid £15million up front with another £3million due in add-ons. James started his debut season in the top flight on fire, with three goals in his first four games and six assists before the turn of the year. But his form dried up after Christmas and the potential arrival of Jadon Sancho threatens the Welshman’s prospects even further.

8) Adama Traore (Wolves, £18m)
Boro fans already bored of Pulis-ball were gutted to see Wolves cough up the £18million required to trigger their Player of the Year’s release clause in August 2018. Traore struggled during his first taste of the Premier League in a dreadful Aston Villa side but the greased-lightning winger would now fetch perhaps four times the price Wolves paid should they entertain the big boys’ interest.

👀Adama Traore getting greased up ahead of Olympiacos game pic.twitter.com/cbjjDu0kcZ

7) Jarrod Bowen (West Ham, £18m)
The former Hull winger was very much in demand towards the end of January, with Newcastle, Palace and West Ham all keen to sign the 23-year-old. The Hammers won the race for Bowen, who finished as Hull’s top scorer with 17 goals despite his last goal coming on New Year’s Day, with David Moyes paying the Tigers £18million. Bowen offered four assists while emerging as one of the few good things about the modern West Ham.

6) Oliver McBurnie (Sheffield United, £18m rising to £20m)
That’s the price of a decent Championship striker, it seems. Was he a success? On the one hand he ended the season as the Blades’ joint top-scorer in the Premier League. On the other, that only took six goals.

5) Eberechi Eze (Crystal Palace, £20m)
Roy Hodgson saw enough in Eze’s performances for QPR last season to make the attacker his most expensive signing ever. Palace have demonstrated their faith in Eze even further by handing the new boy their No.10 shirt for his maiden season in the Premier League.

4) Neal Maupay (Brighton, £20m)
Matteo Guendouzi’s best mate was the second £20million signing Graham Potter made for Brighton within a couple of days in early August last year. By the next transfer window, in January this year, he was being lined with a move to Napoli for twice that figure.

3) Adam Webster (Brighton, £20m)
The versatile defender was only with Bristol City for a season following his move from Ipswich in 2018 for £3.5million potentially rising to £8million. The Robins collected a huge windfall when the Seagulls coughed up a club-record £20million but Webster has been worth the outlay having broken up the Dunk and Duffy partnership at the heart of their defence, with Duffy having now been sent to Celtic on loan.

2) James Maddison (Leicester, £22m)
Leicester reportedly paid Norwich £22million up front with a further £2million due in add-ons. Given the success of the England midfielder, the Canaries have presumably pocketed many of the bonus payments. Claude Puel said upon landing the playmaker in 2018: “James is a wonderful player who is one of the most exciting young talents in English football.” Seems he had a point and Leicester could reasonably expect a three-fold return on their investment. It’s sorcery.

1) Ollie Watkins (Aston Villa, £28m)
The Aston Villa new boy shoots straight to the top of this list after being reunited with former Brentford boss Dean Smith at Villa Park. Villa’s record deal represents the second occasion Smith has signed Watkins after the Bees took the forward from Exeter in 2017 for £1.8million. Exeter, though, negotiated a 15 per cent sell-on clause as part of the deal, which will see the Grecians net at least £4.2million, with Villa liable to pay £28million up front and potentially £5million more in add-ons for the 26-goal striker.