Home Southampton Top ten most expensive signings aged 30 and over 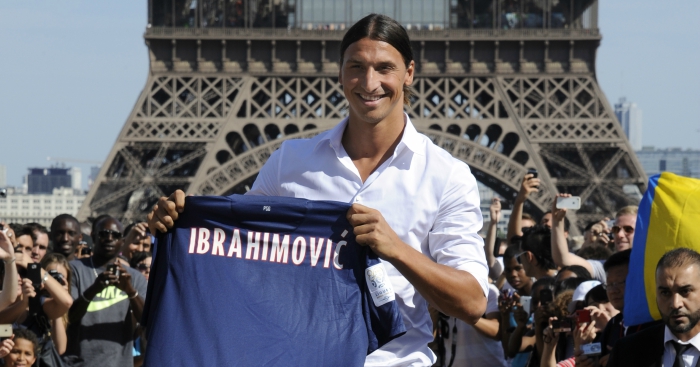 Cristiano Ronaldo would cost a fair whack more than all these 30-somethings, that’s for sure…

10. Graziano Pelle (£13m, Southampton to Shandong Luneng in 2016)
Many a footballer has been tempted to China by one thing in particular. Ask Ezequiel Lavezzi, Carlos Tevez, Oscar, Hulk, Axel Witsel and numerous other players why they have taken the brave step from Europe to the Far East, and the answer is almost unequivocal.

“I came here for the project,” they will say at their first press conference. “I want to help increase the popularity of the sport in this country,” others will claim. Such statements are as transparent as the windows in their new mansion.

When the same question was delivered to Graziano Pelle, he aimed for the stands instead of playing a straight bat. “Obviously I would never have come here if it wasn’t for all that money,” he said after leaving Southampton for Shandong Luneng in 2016. The striker more than quadrupled his wages just four days before his 31st birthday. Lovely present.

9. Medhi Benatia (£14.8m, Bayern Munich to Juventus in 2017)
Those who doubt the veracity of the Fountain of Youth have never been to Turin. Juventus fielded three central defenders in the Champions League final earlier this month aged 36, 32 and 30. Gianluigi Buffon is 39 and going strong. Dani Alves is 34 and still courted by Europe’s elite.

Medhi Benatia was an unused substitute for that defeat to Real Madrid in Cardiff, and is the Italian side’s veritable youngster. Max Allegri signed the Moroccan on loan from Bayern Munich in summer 2016 before making the move permanent 12 months later. The 30-year-old started just 17 games in all competitions last season, and could feature even less often if youngster Daniele Rugani’s development is justifiably prioritised. He’s not a bad option to have in reserve, mind.

8. Angelo Peruzzi (£15.7m, Inter to Lazio in 2000)
Countless Italian goalkeepers have been lost in the evergreen shadow of Gianluigi Buffon. Gianluca Pagliuca, Francesco Toldo and Christian Abbiati have all enjoyed accomplished careers, but they would have been remembered more fondly without the magic Gigi making each look like Massimo Taibi in comparison. That’s a touch strong, but still.

Chief among those eclipsed by the Juventus legend is a man who achieved more, at least in terms of trophies won. Both can boast a full sweep on the domestic scene and a World Cup winner’s medal, but only Peruzzi has a Champions League title to his name. He claimed Europe’s premier trophy in 1996 before leaving for Inter in 1999, then Lazio a year later at 30.

Buffon may have displaced Peruzzi at both club and international level, but Superman must envy his elder’s achievements. And yet Peruzzi was still not named on our list of the top ten goalkeepers from the 1990s.

7. Zlatan Ibrahimovic (£15.7m, Milan to PSG in 2012)
When Zlatan Ibrahimovic left Paris Saint-Germain in 2016, he claimed that he had arrived as ‘a king’ and departed as ‘a legend’. The Swede became the club’s record goalscorer in four whirlwind years; it was hardly one of his more outlandish statements.

The striker has won trophies at every club he has graced, but he developed a particular taste for silver upon his move to the French capital. Ibrahimovic won an average of three trophies a season at PSG, and his only two placings in the voting for the Ballon d’Or came in France. He finished 10th in 2012, then fourth a year later. That the finest years of his career came at the Parc des Princes is almost fitting. His £15.7m fee as a 30-year-old in 2012 exceeded the £12m Juventus paid to sign him from Ajax as a 22-year-old in 2004.

6. Jeremy Mathieu (£15.8m, Valencia to Barcelona in 2014)
“It’s not good to pick on single players after a defeat. It’s a defeat for the whole team, starting with the coach,” said Luis Enrique after Barcelona were swept aside by Juventus in the Champions League quarter-final first leg in April. It was an honest but flawed assessment, considering Jeremy Mathieu was substituted at half-time. The Frenchman has not featured since.

Mathieu was never a popular signing due to his advancing years. He was 30 when Barcelona spent a not-inconsiderable £15.8m on him in 2014, handing him a four-year contract. The 33-year-old was not as disastrous a purchase as Dmytro ‘ctrl + c, ctrl + v’ Chygrynskiy, but he will not go down in Nou Camp folklore when he he surely leaves this summer.

5. Claude Makelele (£16m, Real Madrid to Chelsea in 2003)
There are few things better in the world of football than a complete lack of perspective. Which brings us to Les Ferdinand, who remarked in 2014 that “the worst thing that happened in this league was Claude Makelele”.

Of course, the then-Tottenham coach’s actual complaint lay mainly in the advent of the holding midfielder, not in Makelele himself. Ferdinand would add that both Chris Ramsey and Tim Sherwood “agreed” with him regarding the issue, which just feels right.

One thing is for sure: Makelele spent five years in England, but forced many to change their tactical outlooks. Of the many players Chelsea have signed since the billions of Roman Abramovich first adorned the Stamford Bridge halls, the Frenchman might well be one of the most important.

4. Claudio Bravo (£17m, Barcelona to Manchester City in 2016)
Pep Guardiola is many things: A revolutionary manager; an accomplished former player; bald. But for all the Spaniard’s numerous achievements, his transfer record is more than a little patchy.

The aforementioned Chygrynskiy was often thought to be his very worst purchase ever, the little-known centre-half arriving from Shakhtar Donetsk for £21.6m in 2009 before returning to the same club less than 12 months later for £12.4m.

Claudio Bravo might have just finally edged out the Ukrainian. The Chilean was already 33 when Guardiola spent a whopping £17m to bring him to Manchester City last summer, meaning Bravo is the only player to appear in a list of the ten most expensive goalkeepers of all time twice. He was supposed to embody the new manager’s ethos of building from the back, but infamously embarked on a run of games without making a single save before losing his place to bloody Willy Caballero. That Guardiola saw fit to spent £34.9m on Ederson less than a year after Bravo’s arrival tells its own story.

3. Samuel Eto’o (£22m, Inter to Anzhi in 2011)
Back in February 2014, Jose Mourinho was left frustrated after a secret recording emerged of him criticising his Chelsea strikers. The Portuguese questioned the standard of Fernando Torres and Demba Ba, who had at that point scored a combined 11 goals in 44 appearances. Then Mourinho turned his attention to forward number three:

Eto’o’s response was simple: He scored on his next Premier League start against Tottenham, and proceeded to celebrate by limping towards the corner flag, holding his back and grimacing. He would brand Mourinho a “fool” for calling him an “old man” when his contract at Stamford Bridge expired that summer.

If Mourinho thought Eto’o was an “old man” at 33, one can only wonder what he thought when Anzhi Makhachkala spent a whopping £22m – plus a weekly wage of £350,000 – on the Cameroonian two years before. The return? Thirty-six goals in 73 games, with billionaire Suleyman Kerimov eventually cutting the club’s budget by two-thirds in summer 2013 due to a lack of success. Eto’o was one of 21 players sold in that transfer window.

2. Gabriel Batistuta (£23.5m, Fiorentina to Roma in 2000)
Bravo is the most expensive 33-year-old in history; Angel Gabriel holds the crown for those aged 31. And the regal vocabulary is no coincidence, for he is rightfully considered royalty at home and in Italy.

Batistuta emerged in his native Argentina as a talented forward, taking in the biggest names of his home country in his earlier years. He started at Newell’s before moving on to River Plate and then Boca Juniors. By 1991, the forward had earned a transfer that would come to define his career.

The Argentine spent nine years at Fiorentina, rejecting overtures from Manchester United and Liverpool, helping them return to Serie A after their relegation in 1993, and establishing himself as a club legend. The icon had earned enough credit by 2000 to leave for Italian rivals Roma for £23.5m to capture an elusive top-flight title. He was the club’s top scorer with 20 goals as they finished two points clear of Juventus in his first season.

1. Diego Milito (£24.7m, Genoa to Inter in 2009)
If Ronaldo does leave Real this summer, he will dethrone Diego Milito as the most expensive player aged 30 or over. The two already share more than one thing in common: the Portuguese became the first player since Milito to score two goals in a Champions League final earlier this month.

It just so happens that Jose Mourinho, the man who would be welcoming Ronaldo back to Old Trafford, sanctioned the deal to sign Milito, who had only turned 30 weeks earlier, for Inter Milan in 2009. The Argentinean scored 24 goals in the 2008/09 Serie A season for Genoa, finishing just one short of Zlatan Ibrahimovic. And with the latter departing for Barcelona, Mourinho had to source a replacement.

In came Milito – ‘The Prince’ – and despite initial reservations over both his price and age, the rest is history. He netted 30 times in 52 games as Inter and Mourinho sealed a memorable treble, with Milito crowning a historic personal season with two goals against Bayern Munich in Madrid.