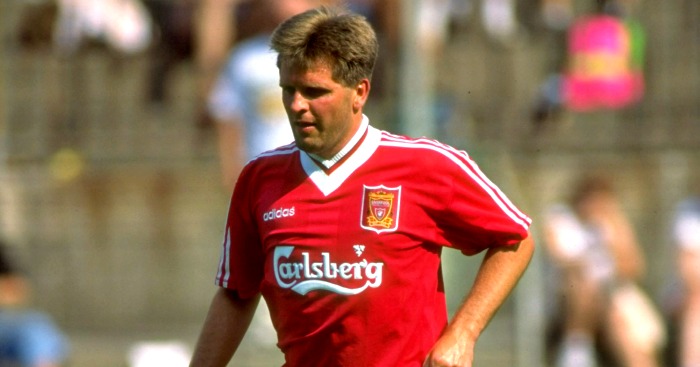 The boffins at Football365 have come up with an algorithm based on a delicate combination of chubbiness and lovability. We bring you the top ten loveliest chubbies in football.

10) Tom Huddlestone
“I have a dream” – Martin Luther King.

“Education is the most powerful weapon which you can use to change the world” – Nelson Mandela.

“Success consists of going from failure to failure without loss of enthusiasm” – Winston Churchill.

“I miss ketchup with my chicken” – Tom Huddlestone.

It rather encapsulates Tom Huddlestone that this is his second consecutive appearance at No 10 in a top ten list. The midfielder was dealt a culture shock in 2007. Juande Ramos was appointed as Tottenham head coach, and the Spaniard brought with him some crazy ideas about dieting. Never mind no ketchup with chicken, Ramos would cut out sugar and fruit juices, the fiend. Huddlestone, then just 21, was understandably devastated. The midfielder was part of a Spurs side who, according to then fitness coach Marcos Alvarez, was “100 kilograms overweight”.

All of the above have been used in the past to describe former West Ham striker Benni McCarthy. The final interpretation came from current Hammers vice-chairman Karren Brady, who labelled him a ‘super size player devoted to filling his belly more than filling the net’. McCarthy moved to Upton Park in 2010, but struggled to keep his weight down. He was reportedly fined £200,000 of his wages for failing to meet fitness targets set by the club, and did not score in 13 games before leaving. McCarthy’s genius riposte was to brand Brady “the devil with a set of tits”. Was there any need to bring Davids Gold and Sullivan into it?

8) Frank Lampard
For a footballer who became synonymous with the nickname ‘Fat Frank’ throughout his stellar 20-year career in the Premier League, Frank Lampard remains rather slim. But his face does suggest the prospect of a late-developing chub. The taunts began soon after his breakthrough at West Ham in 1995, and Lampard has revealed that even his team-mates during his loan at Swansea in his formative years would “dig him out” for his “puppy fat”. Little Frank was a mere 17 years of age at the time.

Such jibes followed Lampard to Chelsea, but the midfielder learned to take them on the chin – note the lack of plural, Custis – as he said in March 2014:

“I’m fine with it now; it actually makes me laugh. But when I was younger it used to upset me, it was a stick to beat me with. It started at West Ham, and I can remember going back to Upton Park about seven years ago and a really overweight woman stood up in the chicken run and shouted ‘Fat Frank’ at me.  That was the moment where I realised this was getting ridiculous, so I just laugh at it now. I am more than happy with ‘Fat Frank.'”

7) Mario Gotze
It is yet to be proven that Mario Gotze is not a chipmunk. He is a 23-year-old World Cup final-winning goalscorer and plays for Bayern Munich, that much is for certain. But a chipmunk masquerading as a footballer? Such claims have never been denied. German daily newspaper Bild ran a story on Gotze in November of last year, with the midfielder reported to have put on weight during time spent on the sidelines through injury. Or, as they put it: ‘The swimsuit seems to have accepted the permeability of its owner.’ Wonderful.

Frankly, the German is adorable. While some lose their puppy fat in their teenage years or soon thereafter, Gotze proudly wears his as a symbol of success. Just look at him!

If Mario Gotze's face is this chubby now, imagine what he looked like as a baby pic.twitter.com/Rkz5k55oUa

6) Jan Molby
‘Who ate all the pies?’ The chances are Jan Molby did. The Danish midfielder spent 12 years at Anfield after joining the club in 1984, and soon became a fan favourite. Bob Paisley once said that Molby was capable of managing games “by remote control”. ‘Big Jan’ is often renowned as one of the finest passers the club has ever seen. The Dane was voted 16th – the highest of any overseas player – in a 2006 poll of the 100 players who shook the Kop, and he did so in more ways than one. Molby scored 61 goals in 292 appearances for Liverpool, and the 1986 FA Cup final is still affectionately named in his honour by Liverpool fans after his man-of-the-match performance against Everton. The legendary Dane cultivated a figure befitting a player stuck in a constant cycle of testimonials throughout his 17-year career.

‘Two years may have passed – and several more pounds been gained by the burly Welshman – but he was not to blame when Leeds took the lead after 12 minutes,’ reads part of the match report from the final appearance of an excellent career for Southall. That game came in 2000, a full 20 years after his professional football debut. Then 41, the goalkeeper emerged from his role as a player/coach at Bradford to quite literally fill the role of emergency shot-stopper, with the Bantams’ three other options out injured. His frame on that day acted as a mere precursor to the glorious growth which would follow.

4) Tomas Brolin
“Give me a month to get my full fitness back, and then I will show people what I can really do,” was the message from Tomas Brolin to Leeds fans upon securing a £4.5million move to Elland Road in 1995. The weight goes on.

Brolin moved to England as a superstar in 1995 and left just three years later as a joke. The Sweden international had starred for his country as they secured an unlikely third place at the 1994 World Cup, with the midfielder having also finished joint-top goalscorer during a semi-final appearance in the 1992 European Championship. Brolin also won four trophies in five years at Parma, and came fourth in the voting for the Ballon d’Or in 1994. So what went wrong?

His relationship with managers Howard Wilkinson and George Graham for a start. The two bosses found Brolin impossible to deal with, and an ankle injury suffered during an international friendly in late 1994 impacted on his fitness. Brolin would never again regain the form which made him one of the finest footballers in the world, and his added weight was to blame. As written by BBC Sport in 2003, Brolin ‘arrived with an enormous reputation and left with an even bigger gut’.

Brolin, who infamously had his passport confiscated by then Leeds boss Graham after blaming a missed flight for pre-season training on a bird – erroneously reported as an elk by the British media – flying into his windscreen, has an accomplished portfolio in retirement. The professional poker player has also tried his luck in catering, property, shoes, skin care, race horses, and, of course, vacuum cleaner nozzles.

When former Manchester United midfielder Anderson is your kindred footballing spirit, it does not bode well.

But Payet’s charm lies in the fact that he’s still sodding excellent. The Frenchman exhibits the appearance of an ordinary man, but is very much capable of the extraordinary. No current player embodies such a marriage more effectively than the 28-year-old; it’s why we all love him.

2) Ronaldinho
If Jeff Powell of the Daily Mail thought that Eden Hazard was displaying early signs of ‘man boobs‘ and ‘rolls of blubber’ against Paris Saint-Germain last Wednesday, one dreads to think what his reaction would be to the regression of Ronaldinho. It was back in 2007 when the Brazilian’s soft centre first became an issue. Aged just 28, the Barcelona forward had won the Ballon d’Or two years earlier. Spanish newspaper AS described him as ‘fat and lazy’. His decline was dramatic.

Many attribute his accelerated weight gain to excessive drinking and partying. “To lose a player with the quality of Ronaldinho is a shame for everyone,” his manager at AC Milan, Massimiliano Allegri, once said. “However, he wanted to make a life choice by going to Brazil.”

His other boss in Italy, Carlo Ancelotti, added: “The decline of Ronaldinho hasn’t surprised me. His physical condition has always been very precarious. His talent though has never been in question.” The World Cup winner spent three years in Milan before departing for his homeland in 2011. He was still only 30 at the time.

1) Ronaldo
Brazilian Ronaldo. Old Ronaldo. Original Ronaldo. When the footballing world was posed a dilemma in around 2003, it had a number of options at its disposal. A fresh-faced Portuguese winger had emerged at Manchester United by the name of Cristiano Ronaldo. But Il Fenomeno – the Brazilian Ronaldo, the old Ronaldo, the original Ronaldo – was still a force to be reckoned with at Real Madrid and Brazil.

The solution? Fat Ronaldo. Such a nickname was hardly befitting a two-time Ballon d’Or and World Cup winner, who would eventually retire with a tally of 414 goals in 616 games for club and country.

And then you look at an image of the Brazilian Ronaldo in his final professional football match.

Ah. With a litany of injuries gradually taking their toll on the flabulous talent, Ronaldo’s weight gradually ballooned until his retirement in 2011. Yet, even in his later years, the striker was still capable of the deftness of touch and burst of pace belying his larger frame. He enjoyed a stellar career, but just think what could have been. What a waist.