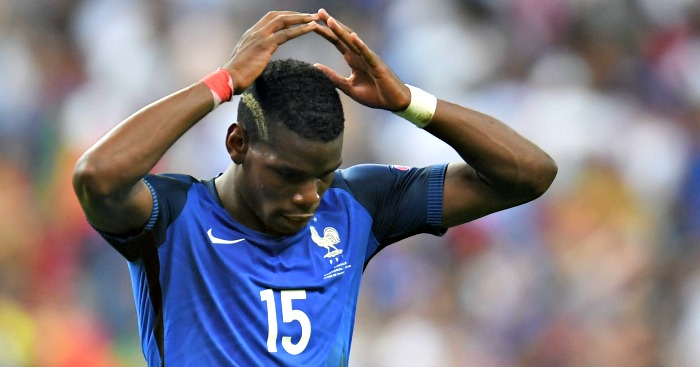 10. Jordon Ibe (£15m)
When reports emerged that Liverpool had accepted a bid of £15m from Bournemouth for one Jordon Ibe, reactions were that of utter befuddlement. He has long been considered a talented winger, but one who required a considerable amount of work, time and dedication in order to fulfil his potential.

Then West Brom and Newcastle joined the party, and we all realised that, frankly, football is f**ked. This is a 20-year-old who has made just 22 Premier League starts in four years at Anfield. Across his spells with Wycombe, Birmingham and Derby, he started 19 league fixtures. He is a winger with one goal and three assists in 41 English top-flight games. He is uncapped by England, and stands at the back of a long line with regards to the national team. His expected £15m fee would crown him the most expensive uncapped English player in history. Somehow, he is about to enter his sixth season as a professional footballer, and he might be about to do it after moving for seven-and-a-half Michus.

9. Yannick Bolasie (£28m)
If not this summer, then perhaps never. Since his Premier League debut in 2012, Yannick Bolasie has constantly been linked with a move up the ladder. The Crystal Palace winger was touted for £40m by manager Alan Pardew the summer before last, with Tottenham even supposedly ‘agreeing’ a deal for the Congo international that January. “I’ll sell Yannick, if someone wants to give me £40m to £60m, somewhere in there, that would be good,” said Pards, licking his lips as he tore into another pineapple chunk.

Now 27, bonafide Football365 pet Bolasie is running out of time to test himself at the highest level. Valued at a more acceptable but still rather ridiculous £28m, he might just be priced out of that dream. Everton and West Ham are thought to have joined long-term admirers Tottenham in the race to sign the winger, but the former two would be breaking their transfer record to purchase a player with ten goals in 95 Premier League games, and a limited number of years remaining at his peak.

8. Robbie Brady (£20m)
As if to propagate the ridiculousness and surrealism of Leicester City winning the Premier League title, their club-record signing and marquee purchase in the subsequent summer could be a relegated Norwich full-back. According to reports at least, with Norwich and Euro 2016’s Robbie Brady being valued at £20m by most outlets. The Irishman impressed this summer, and was one of few positives to emerge from a disappointing campaign for his club. Leicester have been joined by a number of Premier League clubs, including Southampton, Stoke, Sunderland, West Brom and West Ham, in pursuit of his signature, but the fee is likely to see at least four of those clubs dropping out. Everton could be a contender, backed by billionaire Farhad Moshiri and a new-found authority under Ronald Koeman. It would make his eventual fee no less bizarre.

7. John Stones (£50m)
What do the only two outfielders not to play a single minute of football at Euro 2016 for England have in common? Their clubs, of course, as both play for Everton. Both are also young, and are constantly compared to the very best players in their respective positions. But what John Stones and Ross Barkley share more than anything else is the fact that they are both burdened with quite ridiculous valuations.

Whether it was the Cruyff turn in his own box, the costly mistake in the semi-final of the Capital One Cup or the accidental transfer request which helped Everton decide his worth as a £50m player is unclear. What is obvious is that Stones is struggling with the considerable weight of expectation placed atop his shoulders. Pep Guardiola and Manchester City have ‘identified’ the 22-year-old we are contractually obliged to call a ‘ball-playing centre-half’ as their priority signing this summer, and if any club is willing to put aside ridiculous valuations in order to secure their man, it is them. Money can’t buy you Stones – unless you offer a veritable f***load.

6. Michael Keane (£20m)
If you thought Leicester signing Robbie Brady for £20m was ludicrous, how about another crazily-priced Manchester United alumnus? The Irishman at least offers one full season of Premier League football which has not culminated in relegation to the Championship. Keane, although he is one of the six most likely to receive their first England cap, has only just completed his first league campaign in which he has made more than 22 appearances, yet Burnley, as they bloody well should in the current climate, are demanding £20m from the champions for his services.

The centre-half is now 23. A selection of central defenders younger than him makes for stark reading: Raphael Varane, Samuel Umtiti, Aymeric Laporte, Marquinhos and many, many more. Each boast Champions League and international experience; Keane’s last game came in a 3-0 win over Charlton.

5. Odion Ighalo (£38m)
Gianfranco Zola. Emile Heskey. Peter Crouch. Joseph-Desire Job. The aforementioned quartet is a mere taste of the calibre of strikers Odion Ighalo outperformed in his debut Premier League season with Watford. Zola, Heskey and Crouch comprise 264 Premier League goals, and share a number of trophies and individual accolades during their productive and memorable spells atop the mountain of English football. But, unlike Ighalo, none of them ever scored more than 15 goals in one Premier League season. And if the Watford forward had registered more than one strike in the club’s last 15 fixtures, 16-goal maximum top-flight stalwarts such as Paolo Di Canio, Dennis Bergkamp and Robbie Keane would also be outstripped.

Such goalscoring exploits would always lead to speculation, and the ever-affable, always accommodating Chinese Super League was more than happy to oblige. No one division has done more to irreversibly change the transfer landscape more over the past 12 months, and when Shanghai SIPG offered £38m this summer for a 27-year-old striker with one year’s worth of Premier League experience to his name, the football world was forced to sit on the naughty step and consider what it had done.

4. Moussa Sissoko and Georginio Wijnaldum (£60m)
For all intents and purposes, Newcastle are a Premier League club trapped in a Championship body. They have a Champions League-winning tour de force of a manager in Rafael Benitez. Their £30m transfer expenditure so far this summer is marginally more than the rest of their second-tier compatriots have spent combined. They are selling their players to the Chinese Super League. They have a striker in Aleksandar Mitrovic whose existence next season will involve generally being ablaze and terrifying defences. They have players the calibre of Emmanuel Riviere. And they can walk around demanding figures upwards of £20m for their prized assets.

Moussa Sissoko had a wonderful Euro 2016. He confirmed his role as France’s James Milner, except slightly less boring and slightly more useful. But his showings for Newcastle remain that of a disinterested man. The double-edged sword of such a strong summer-tournament showing came as interest in the midfielder understandably intensified, before Newcastle decided to place a ‘FOR SALE: £35m’ sign on his head. And as for Georginio Wijnaldum, the Toon signed the Dutchman for £14m last summer. In between relegation and destroying Norwich defences containing Steven Whittaker and Sebastien Bassong, he has somehow added £11m to his valuation. The magic Gini indeed.

3. Leonardo Bonucci (£51m)
Wonderful individual performances at Euro 2016 were few and far between. Michael McGovern prevented a veritable cricket score for Northern Ireland against Germany in the group stages, where Luka Modric also excelled in both of his two appearances for Croatia. Olivier Giroud produced a masterclass in overall forward play against Iceland, while Eden Hazard won our award for best individual performance against Hungary. But few can truly rival Leonardo Bonucci’s showing for Italy against Belgium in their group opener.

Italy confounded expectations on that Tuesday evening, but Bonucci was the conductor from defence. His assist for Emmanuele Giaccherini extolled the virtues of an actual ‘ball-playing centre-half’, while he combined poise and grace in possession with a good old-fashioned Italian style of defending. It did not take long for potential suitors to emerge for the Juventus man. While he confirmed his standing as one of the continent’s finest centre-halves however, the Turin club are demanding £51m for a reason: They know no-one will pay that for a 29-year-old.

2. Alvaro Morata (£64m)
Did I claim that Alvaro Morata had failed his first audition for a move to an elite club when he did not score for Spain against the Czech Republic in his opening game of Euro 2016? Yes, yes I did. Did he go on to score three times in the remainder of the tournament, finishing behind only Antoine Griezmann in the goalscoring stakes? Yes, yes he did. Was I subsequently made to look like a bit of a tit? Yes, yes I was. But is the 23-year-old really worth the £64m Real Madrid have supposedly valued him at? And has his form warranted continued links with Arsenal, Chelsea and Manchester United?

‘This summer is a crucial one in the landscape of the transfer market for numerous clubs,’ I wrote in the piece above. ‘Arsenal’s question: Who is a notable improvement on Olivier Giroud? Manchester United’s question: Who can provide a reliable focal point to an attack? Chelsea’s question: Who can we sign who will score 20 goals a season? On this evidence, Morata is not the answer.’ Regardless of your thoughts over ‘failed auditions’ and the like, one thing remains certain: The Spaniard is still yet to prove himself as the answer.

Morata has league titles in Spain and Italy, honours at youth level for his national team and a burgeoning reputation as one of the continents brightest young strikers. But his career record of 83 goals in 228 games does not immediately suggest a role as the fifth-most expensive player ever.

1. Paul Pogba (£100m)
Ah, the year 2000. An innocent one, certainly in comparison to the current day. France had managed not to bottle a major tournament final. The leadership of the United Kingdom was in no doubt whatsoever. The President of the United States was not an intensely dangerous businessman inspired by his own warped beliefs and agenda. And forget Justin Bieber, Zayn Malik and Mike Posner, because Westlife, The Corrs and S Club 7 are taking the music world by storm.

Not that the BBC had any idea. On July 12, 2000, they posed the question: ‘Has the world gone mad?‘ What sparked this reaction? The world-record transfer fee Lazio paid Parma to sign Hernan Crespo. The £35m figure that, 11 years later, would be enough to purchase on Andy Carroll, caused consternation when spent on a striker who had scored 116 career goals in 235 games until that point.

Such is the rising influence of inflation. But, if the world had ‘gone mad’ when a club was purchasing a proven goalscorer for £35m in 2000, it has positively descended into lunacy as the unveiling of the world’s first £100m footballer grows increasingly likely.

Paul Pogba is undoubtedly a supremely talented player. At just 23, he is a four-time Serie A winner, a two-time Coppa Italia champion, a Champions League and European Championship runner-up, and a former holder of the esteemed Golden Boy award. But £100m? For the player who so disappointed for hosts France at Euro 2016? This summer provided a brief insight into what extent a player can struggle under the weight of the expectancy that comes with such a ridiculous fee; it is no coincidence he was outshone by Moussa Sissoko. As excellent as Pogba is and, more to the point, can be, such valuations are reserved for Cristiano Ronaldo and Lionel Messi for a reason.