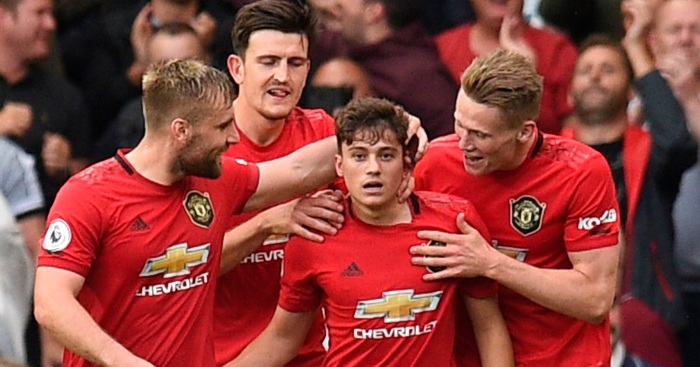 10) Adam Webster (Brighton)
‘Undroppable’ is a stretch but the central defender seems to have established himself at the right of Graham Potter’s three-man defence, crucially at the expense of Shane Duffy. Together with Lewis Dunk, Duffy formed one of the most impressive Premier League centre-back partnerships over the last two seasons but Potter clearly has something else in mind. Duffy, a Republic of Ireland international, is happy among the muck and bullets defending Brighton’s box, but doubts persist over his suitability to Potter’s plan.

It seemed that central defence was one of the areas Brighton were strongest pre-Potter but he clearly has other ideas, having spent a joint-club-record amount to secure Webster from Bristol City. After starting the season on the bench, the 24-year-old was given a Premier League debut at Man City and he has remained in the Seagulls’ defence ever since. At Newcastle on Saturday, he won 90% of his aerial challenges, more than double the number of anyone on the pitch, so Webster can do the dirty stuff. But the early evidence suggests he can play too, which is probably the reason Duffy is watching from the bench.

9) Dean Henderson (Sheffield United)
We’ll be honest, Henderson plays a duel role in this list as both its token goalkeeper and token Blade. But you can’t argue with the facts: he was a new(ish) signing and the lack of goalkeeping alternatives available to Chris Wilder does make the Manchester United goalkeeper completely undroppable.

Henderson was one of only two No.1s to move this summer, and though Tom Heaton has settled well into Villa’s goal, the former Burnley keeper at least has the benefit of experience. For Henderson, this has been his third season on the climb after last year in the Championship and a previous campaign in League One with Shrewsbury. Even though the Blades have protected their 22-year-old Premier League rookie incredibly well, Henderson has still demonstrated why Wilder was so keen to wait for him this summer. Only two keepers (Hugo Lloris and Nick Pope) have a higher save percentage so far this season.

8) Nicolas Pepe (Arsenal)
Unai Emery would probably admit that Arsenal had hoped for a more immediate impact from their record signing. “He needs to adapt,” said the Gunners boss last week. “He is playing well but progressively we know there is going to be more from him. We are working with him – after training we are watching individual videos with him.”

But the £72million recruit from Lille has still created more opportunities than any other team-mate and only four players in the Premier League (Kevin De Bruyne, Roberto Firmino, Trent Alexander-Arnold and, of course, John Lundstram) have created more big chances, despite starting the first two games of the season on the bench.

Not for the first time yesterday, Nicolas Pépé led the game for chances created & dribbles completed. Given that we were a man down & he scored a penalty too, it was a positive display. Slowly but surely, he’s finding his feet. He’ll be a frightening player when he adjusts fully.

7) Aaron Wan-Bissaka (Manchester United)
The £50million full-back has made himself pretty much undroppable already at Old Trafford – but that and the fact United’s three new signings all appear on this list (and formed the shortlist for the club’s player of the month award for August) says more about the group they joined than Wan-Bissaka or his fellow new arrivals.

Wan-Bissaka has demonstrated his defensive attributes and his tackling has already caught the eye – hardly a surprise since nobody has made more in the Premier League – especially in contrast to last season when United’s right-back too often struggled to get close enough to opponents to put a foot in. But going forward, there is plenty of work for the ex-Palace defender to do, which is strange since he spent so much of his youth career as a winger. He’ll get plenty of game time to develop because it seems Diogo Dalot has run over Ole Gunnar Solskjaer’s dog.

6) Rodri (Manchester City)
Pep Guardiola presumably hoped Rodri would be able to dip in and out of his side in the opening months of his Premier League career, initially getting his feet under the table while Fernandinho recovered from his summer exertions with Brazil, before the veteran eventually returned to share the midfield load.

But City’s central defensive woes mean that Fernandinho is needed further back, making Rodri’s presence vital in the engine room. Handily for Pep Guardiola, his £62.8million new recruit has taken to the Premier League in no time. Given the due diligence Guardiola completed before signing the Spain midfielder in his own sweet time, perhaps we should not be surprised. Only Harry Winks has made more passes, with Rodri currently operating at a 92% accuracy level. Given City’s possession dominance, his 18 tackles is also impressive, with only six midfielders (none from big six clubs) having made more.

5) Sebastien Haller (West Ham)
“He looked a donkey at first,” said Pat Nevin of West Ham’s £40million centre-forward before the BBC pundit quickly and forcefully made the point that after the briefest of shaky starts, Haller has offered a very positive impression of his abilities.

The 25-year-old’s first two goals came in his second appearance – his Premier League debut was against Man City back when they had centre-backs – in a game against Watford which he described as “a terrible game for me”. Another followed against Norwich, winning the hearts of Hammers who have waited a long time for a likeable striker. Adapting to the physicality of English football appears not to have been a problem for the Frenchman, who has won more aerial battles than anyone else in the league.

4) Phillip Billing (Bournemouth)
The £15million summer recruit from Huddersfield has shown a side to his game we rarely saw during his time with the Terriers. We all knew Billing to be a combative midfield destroyer – sometimes too literally – but in six starts for Bournemouth, the Dane has showed he has more strings to his bow.

Billing’s appetite to get forward against Southampton and his contribution once he got up there made an impression on Seb last Friday night. Eddie Howe, who seems to have built himself a midfield for all occasions, is similarly impressed: “He’s made a very good start, Phil. We’re very pleased with him. He’s come in and had a real impact on the group and on the team.”

3) Tyrone Mings (Aston Villa)
The Aston Villa new boy was viewed as the poster boy for the transfer market’s descent into lunacy when Bournemouth raked in £20million for their fifth-choice centre-back following 18 Championship games on loan at Villa Park. But even then, the Holte End would gladly have had a whip-round and paid more than double that figure for a player who has quickly emerged as a leader of Villans.

If Bjorn Engels caught most of us on the hop, many will say Mings is simply – belatedly – fulfilling his potential. Gareth Southgate certainly didn’t pick him for his England squad for the recent European Championship qualifiers on the basis of four decent Premier League performances, as impressive as they have been. No one has made more clearances this term and only two players have made more headed clearances than the 6ft 5in centre-back.

2) Daniel James (Manchester United)
The Wales winger took us by surprise with his start to the season, though perhaps we should not have been quite so taken aback. The feeling among scouts watching James at Swansea was that if he could improve his finishing, then there was an absolute bargain to be had.

United moved in uncharacteristically decisive fashion to secure James – and thank Christ they did. Ole Gunnar Solskjaer’s side have managed only six goals in open play, with half of them coming from the Beverley-born speedster’s right foot. Despite stepping up to the Premier League for the first time a month ago, James is the only United attacker who looks a danger to anyone but themselves. Playing in a midfield slower than erosion at West Ham, the 23-year-old carried United’s single threat.

1) Harry Maguire (Manchester United)
United faffed about over paying £85million for the England centre-back but rarely does a dead cert come along in the transfer market and Maguire seemed to be one. There was little doubt that he would improve and stabilise the United defence, and that is exactly what he has done.

Another example of Harry Maguire’s shortcomings when it comes to defensive awareness. Not marking anyone, yet fails to notice Andriy Yarmolenko breaking in behind Ashley Young. Then backs off one-on-one, allowing goalscoring shot. #WHUMUNhttps://t.co/kebTqaCSWp pic.twitter.com/ak5MjPylt7

Admittedly, the bar was so low that Maguire would have had to turn up drunk for him not to have made a positive impact. But the 26-year-old is already the first name on Solskjaer’s team-sheet and, as the club are desperate to tell everyone, that seems likely to remain the case for quite some time.