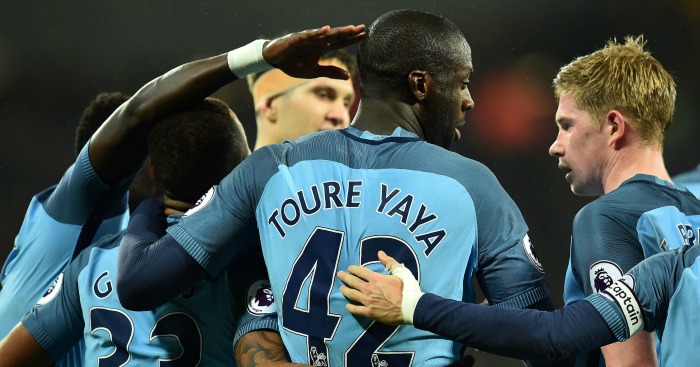 Which players are likely to be eligible bachelors this summer, with their contracts at  current clubs expiring? Santi Cazorla would top this list because he is a beautiful little Spaniard, but it seems that he has extended his Arsenal deal despite it never being officially announced. Instead, we’re looking at players who could well leave when their time is up.

10. Arouna Kone (Everton)
Fredi Bobic. Somen Tchoyi. Aruna Dindane. Leon Best. Whatever fate has in store for Arouna Kone this summer, his status as one of the more unheralded goalscorers of a hat-trick in Premier League history is guaranteed. It was in November 2015 when the Ivorian struck half of his six league goals for Everton in 90 ridiculous minutes against Sunderland.

Things have seldom been as successful for the 33-year-old, who has not scored since in the league and who has found his minutes restricted due to injuries and a severe case of not being Romelu Lukaku. Crystal Palace pursued his signature this winter, but could not quite push the deal over the line. It is understood that Roberto Martinez is working on a deal to sign him for Belgium.

9. Adrian (West Ham)
In the battle of the 30-something back-up goalkeepers, Julian Speroni and Gerhard Tremmel take their rightful places on the bench as Adrian is granted some air time. The Spaniard was imperious last season, his domestic performances earning a first international call-up, but his form has dropped like a catch from a looping cross this campaign. The 30-year-old started the season as West Ham’s No 1, but conceding 20 goals as the club lost six of their first 11 league games saw him lose his place to Darren Randolph.

Heck, even if you remain unconvinced by his résumé, you cannot knock his ability to model giant foam hands in the shape of stadiums.

8. Charlie Adam (Stoke)
Do you remember when Sir Alex Ferguson described Charlie Adam’s corners as “worth £10m”, as it emerged that the Manchester United manager was considering the then-Blackpool stalwart as a potential replacement for Paul Scholes? He has the terrible tackling down to a tee, to be fair, as well as the withering punditry.

Adam has enjoyed a career renaissance this season. Having started the campaign on the periphery of the Stoke squad, he has sh*thoused his way back into Mark Hughes’ plans and thus closed in on a one-year extension on his current deal. If he can help deliver that coveted ninth place, the oldest 31-year-old in history can make any demand he wants.

Aside from letting his Selhurst Park contract expire at the end of the season, what does Joe Ledley actually do? No doubt Palace fans will be along shortly to tell us.

6. Chris Brunt (West Brom)
Tony Pulis likes to live life on the edge. He eats oranges without removing the pips. He does not keep off the grass. He doesn’t change his mattress every eight years (because who bloody does?). He steals pens from Argos. He yearns for his football teams to take a two-goal lead because he revels in the inherent peril of football’s most dangerous scoreline. And he allows the contracts of three of his West Brom lynchpins to run down heading into the summer. Jonas Olsson and Gareth McAuley, a full 70 years of tall centre-half between them, will play the situation by ear, but Chris Brunt has surely earned himself a new deal at The Hawthorns. The 32-year-old has three goals and three assists in the Premier League this season, has a dynamite left foot, and he really would not fit anywhere else.

West Brom signed Chris Brunt for £2.5m almost 10 years ago, what a signing he's proved to be for them

“Jan’s experience of that match was massive for him. He saw, in one fell swoop, what the Premier League was all about and how difficult it is compared to being in Germany, where he knows the language and the players and how comfortable it is.”

The above comments came from the gravy-covered mouth of Sam Allardyce, the future and former England manager discussing one of the greatest Premier League debuts in history. Jan Kirchhoff was introduced as a second-half substitute for Sunderland in a game against Tottenham in January 2016, having signed that same month. He turned his back and deflected a Christian Eriksen shot past his own keeper with one of his first touches, before later conceding a penalty. It wasn’t great.

But then Allardyce moved him into central midfield and, from there, Kirchhoff was a relative success. The German played a huge role in Sunderland’s survival, and David Moyes must hope he can repeat the trick if he manages to recover from a second serious injury of the season. He will be fighting for his future too, with his contract expiring in the summer.

4. John Terry (Chelsea)
It was this time last year that England’s lion finally jumped the shark. Not a man to be upstaged or cast as an afterthought, John Terry thought it necessary to publicly announce after an FA Cup fourth-round win over MK Dons that he would be leaving Chelsea at the end of the season. “I was in last week before the Arsenal game and it [contract] is not going to be extended,” he said, before making it clear that this was Chelsea’s decision, not his.

The official reply was almost instant, and made Terry look a spoilt child. “John was advised that while no new deal was currently on the table, that situation could change in the coming months,” said a club spokesperson. And so it did; Antonio Conte ensured that the captain was offered a new one-year contract extension.

Fast-forward 12 months, and there will be no such reprieve this season for the 36-year-old, who last started a Premier League game in September. At least it means he can concentrate on trying to fast-track himself into a coaching job.

3. Lucas Leiva (Liverpool)
Jamie Carragher was at his generous best when he explained how a defence featuring Lucas Leiva as your third-choice centre-back was “probably not enough if you want to go and win the title”. The man who spent all of January flirting with Inter Milan has started four games at the heart of a troubled defence this season; Liverpool have conceded seven goals in those fixtures, which came against Leicester, Watford, Bournemouth and Hull.

There is something quite comforting about Lucas being Liverpool’s current longest-serving player. He is willing, but not always able. He is often hilarious to watch. He was better under Rafa. And he is not quite good enough.

Andy Carroll his toughest opponents: "Lucas Leiva. Oh my god. He did me every time. I couldn't play against him." ? pic.twitter.com/D0R8kn0H2c

When the 30-year-old does leave – and it will surely be this summer – that would mean that Jordan Henderson takes his mantle as Anfield’s most loyal servant; he joined five-and-a-half years ago. Jon Flanagan would be next, followed by Andre Wisdom. What a world.

2. Michael Carrick (Manchester United)
It’s that time of year again, when we suggest that Michael Carrick would be an ideal signing for Newcastle while he is busy being linked with a ridiculous move to Arsenal. Manchester United have never, ever, ever, ever lost when the Wallsend boy has been within at least five miles of Old Trafford, but his long-term future might lie elsewhere.

Jose Mourinho likes him, that much is obvious, but the 35-year-old’s age will count against him. Carrick is arguably already being phased out; he sits directly below Marouane Fellaini and above Chris Smalling in terms of Premier League minutes for United this season. That is quite the stodgy sandwich, one which is just as liable to elbow through your digestive system as metronomically pass through it.

1. Yaya Sanogo (Arsenal)
Hey, he’s in Arsenal’s Champions League squad. More than anyone can say for you, pal.

1. Yaya Toure (Manchester City)
What a bloody turnaround. It took Yaya Toure a few months to tell Dimitri Seluk to just be bloody quiet, but the midfielder’s performances since his return to Manchester City have been excellent. He has helped thaw the frosty mood around the Etihad Stadium, returning from having been frozen out himself.

Of City’s five defeats this season, just two have come with Toure starting. Only Sergio Aguero (11) and Raheem Sterling (5) have scored more Premier League goals for Pep Guardiola’s side this campaign (4). City win 68.75% of their games in all competitions with Toure starting, compared to 55% without.

All of the above has accomplished two things: It has helped earn him either a new contract or a lovely move elsewhere, and it has ensured that I will spend May 13 locked in a dark room with no internet or other contact with the outside world. Will the internet be able to cope with the birthday cake-related banter on the Ivorian’s birthday?