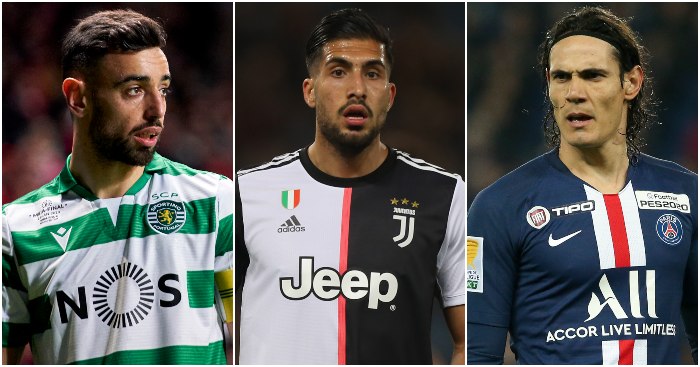 10) Boubakary Soumare
‘Paul Pogba without the baggage’, apparently. That’s the verdict of the Lille midfielder’s team-mates and Manchester United have been heavily linked with a move for the France Under-21 international, presumably so Pogba can pack his baggage for Real Madrid or Juventus.

Soumare has been linked with a big move this month and United are just one of a number of clubs who have been watching him. Chelsea are also sniffing around and Lille coach Christophe Galtier isn’t confident of keeping hold of the 20-year-old: “I don’t know about Soumare,” he said before Sunday’s defeat to PSG. “Nobody told me something about this situation. I don’t know if this could be his last game.”

Soumare may as well wait. He has clubs all over Europe looking at him so this week is not going to be his last chance to secure a big move, or Lille’s best shot at securing a big fee. Unless one of his suitors panics, which is quite likely at this stage…

9) Jarrod Bowen
The Hull striker needs to do something. Bowen is six months from the end of his contract and though the Tigers can trigger a one-year extension, they don’t want to take their biggest asset into next season without a long-term agreement in place.

Hull have offered Bowen fresh terms that better reflect his growing status after the 23-year-old scored 16 goals and laid on another five through the first half of the Championship season. While they await a response, so do his suitors, which include Leeds and Newcastle.

Newcastle were quoted £22million earlier in the window and though they are desperate for an attacker worthy of the title, Mike Ashley won’t cop for that. There is a deal to be done this week and many reckon Bowen could be the next Championship talent to take the promotion.

8) Yannick Carrasco
The Belgium winger has been trying to get back to Europe from China for around a year now and London appears to have been his preferred destination. Arsenal were most likely his preferred club, but it seems he might settle for Crystal Palace unless the Eagles’ interest flushes out any other interested party.

Carrasco, still only 26, hasn’t sacrificed his Belgium squad place as a result of his move to Dalian Yifang. The former Atletico star featured in every squad during the Red Devils’ Euro 2020 qualifying campaign but started only twice, against San Marino and Cyprus when qualification had been secured. Carrasco will want a move to enhance his prospects ahead of the finals this summer.

If Arsenal are indeed looking at Thomas Lemar, what chance their interest in Carrasco might be piqued once more? West Ham are also said to be sniffing around, if the player has the right agent…

“Everyone this is Belgian international Yannick Carrasco, who famously scored Atletico’s equaliser in the 2016 Champions League final.

While he’s here, he’ll be understudy to Jeffrey Schlupp.”#CPFC pic.twitter.com/gLT1fwBLRq

7) Danny Rose
Spurs would be happy to sell the left-back, especially since he has stated that he would be willing to sit on his contract until it expires. But Rose is neither use nor ornament in the meantime so the opportunity to rake in some cash for a player who has fallen out of love with the game would be one Daniel Levy is keen to seize.

Luckily for Levy, around a third of their Premier League rivals seem keen to give Rose the chance of a change of scenery. Bournemouth, Newcastle and Watford are among six clubs hoping to borrow the 29-year-old until the end of the season, but Spurs would prefer to sell or at least insert an obligation to buy into the terms of any loan deal.

Rose reportedly had a bust-up with Jose Mourinho after being left out of the squad to travel to Watford last week and his days at Spurs seem numbered. If he is to reclaim his England place then he needs to get away before Friday and get games under his belt. But his level of desire to do that remains in some doubt.

6) Thomas Lemar
You can’t accuse Atletico or Lemar’s representatives of not doing everything they can to drum up interest in the France winger. Diego Simeone publicly stated that Lemar “has not met the expectations set for him”, adding: “Who is to know if he will stay or not? His representatives are working hard.”

Indeed they are. Lemar has been linked with half of the clubs in London as well as Wolves. Reports from Spain at the weekend suggested Arsenal were frontrunners for the 24-year-old and they have retained a long-standing interest since seeing a huge £90million deal fall through two-and-a-half years ago.

Since catching the eye of Arsenal and Liverpool then, Lemar moved to Atletico from Monaco for £52million but, as Simeone said, he has struggled to live up to his price tag. Lemar has started fewer than half Atletico’s La Liga matches this season and is yet to offer a goal or an assist. Last season, in 33 appearances – 22 from the start – he contributed to only five goals. Wherever he goes, Lemar would need to hit the ground running.

5) Olivier Giroud
The Chelsea striker was hoping to be part of Inter Milan’s grand plan to hoover up all the Premier League talent approaching the end of their contracts. But it seems Inter are teasing Giroud by talking to another out-of-favour veteran striker, Napoli’s Fernando Llorente.

Whether that was Inter’s not-so-subtle way of provoking Chelsea or the player’s agents into being more flexible over the terms, we don’t yet know. But it leaves Giroud in limbo and the France striker needs to play football.

“It would be better for him, of course, to go to a club where he would get more playing time,” said Didier Deschamps last month. “If he can’t get it at Chelsea, the idea is to get it elsewhere.” If the striker wants to be involved in France’s Euro 2020 campaign, he best heed his coach’s advice.

4) Emre Can
He might not be willing to move to Manchester United – he’s in good company – but the Juventus midfielder needs to go somewhere. He was left out of the Juve squad for the Champions League group stages and though he has played occasionally in Serie A, usually as a substitute, the writing is on the wall for the German, especially while Maurizio Sarri drowns in midfield options which he rates above Can (but not high enough that he doesn’t want to recruit more).

It seems the 26-year-old has got the message: “I’m not happy at Juventus right now,” he said at the end of 2019. “I’m not playing much at the moment. I played a lot last season, especially in important matches.”

United were said to be interested and he fits their criteria. But Can has so far used his Liverpool connection to swerve Old Trafford, even if Ole Gunnar Solskjaer isn’t taking no for an answer. Fortunately, Borussua Dortmund and AC Milan also seem willing to offer him a game, though Dortmund may have to come up with more than the £15million they have already offered.

3) Islam Slimani
Slimani has never been hotter. Leicester couldn’t get a fee in for him before he went on loan to Monaco but a decent half-season now has Manchester United and Tottenham looking at the Algeria centre-forward.

Slimani’s numbers certainly catch the eye. The 31-year-old has scored seven and created another seven in 13 Ligue 1 matches for Monaco this season. It’s been enough to make Solskjaer and Jose Mourinho forget that he only scored eight in 39 Premier League appearances for Leicester and Newcastle. Actually, we’d all forgotten he was at Newcastle.

Unless United and Spurs get their acts together, we can see Slimani flying into England on Friday, though why Leicester would want to help out a top four rival – especially when he will leave for nothing in the summer – is not clear.

2) Edinson Cavani
The PSG striker has made perfectly clear his desire to move on before Friday, having told Thomas Tuchel over a week ago that he wanted to leave now rather than wait until the summer when he can have his pick of clubs as a free agent. PSG will oblige but the Parisians first tested the water to see how desperate his suitors might be. No one, it seems, is daft enough to pay £24million, as was their initial demand, for a 32-year-old they could pick up for nothing in six months.

PSG will probably accept half of that, and they will probably take it from Atletico Madrid. The noises coming from Cavani’s camp suggest Spain is his preferred destination and Atletico have already had an £8.5million offer rejected a fortnight or so ago. Another £4million or so on top of that should secure the former Napoli hitman for Diego Simeone.

But Chelsea are also keen and their need is great. As is Manchester United’s but they have been dithering over Cavani and the striker would probably be too smart to fall for Ed Woodward’s sh*t. This one may come down to whether Chelsea are willing to pay slightly over the odds to rectify their biggest weakness.

1) Bruno Fernandes
It’s baffling how this saga is still dragging on yet in no way surprising given the protagonists involved.

Manchester United, Sporting Lisbon and Fernandes all appear as desperate as each other to get the deal done but the two clubs are waiting for the other to blink. Sporting apparently need the money; United absolutely need some quality in midfield. The Portuguese club could perhaps afford more to wait until the summer to have their needs met. United, on the other hand, need players now.

You wouldn’t blame Fernandes if he’s sick of this sh*t. The 25-year-old had it all summer when Sporting were trying to cash in on him then. But surely the whole carry-on will conclude this week. Pig-headed as either club may be, they both need this deal to happen.