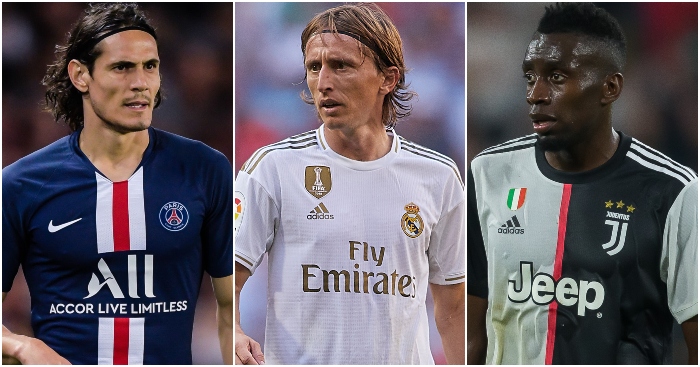 10) Juan Cuadrado
The Colombian is following in the laser-straight footsteps of Antonio Valencia by undergoing a conversion from an underperforming winger to a right-back. Maurizio Sarri is said to be ‘very pleased’ with Cuadrado, though it remains to be seen whether he is pleased enough to offer the former Chelsea squad player a new deal.

Cuadrado will be 32 when free agency comes around with one more big-ish deal in him. Should he maintain his improvement at right-back, his versatility will appeal to a range of Premier League clubs, as will the fact he has admittedly brief experience of English football. West Ham and Watford were among a host of clubs, including AC Milan, Sevilla and Valencia, all interested in Cuadrado last summer.

9) Ever Benega
The Sevilla midfielder looked set to join Arsenal last January until the Gunners’ hierarchy opted to take Denis Suarez on loan instead. That went well.

To Unai Emery, one of Banega’s appealing qualities – aside from his tenacious midfield style and the fact they have worked together before – was his £18million release clause. Not low enough to tempt any of the Argentina star’s suitors, but as a free agent who turns 32 two days before his Sevilla contract expires, he is sure to have a long line of clubs willing to loosen the purse strings when it comes to wages. AC Milan are thought to be willing to move in January rather than fight everyone else for Banega in summer.

⚪🔴 A beautiful ball from Éver Banega, a sweeping finish from Nolito, and Sevilla are back on level terms!

📺 A great game in progress on Premier Sports 1 pic.twitter.com/tDd4xgB1Fo

8) Boubakary Soumare
Manchester City, Everton, Wolves, Leicester and Tottenham have all been credited with an interest in Lille’s 20-year-old midfield prospect, who was talked about as a possible £35million import during a summer when he had only 12 months remaining on his deal.

So far, Lille have not yet tied down the former PSG youth team player, leaving them vulnerable to vultures who would be liable only for compensation because of the Soumare’s age. The leggy midfielder, likened both to Paul Pogba and Yaya Toure, has been in and out of Lille’s Ligue 1 side this season owing to an early-season red card, but he has started both of their Champions League matches so far.

7) Mario Gotze
Remember when Gotze was one of the hottest properties in world football? It seems like a long time ago when Bayern Munich took the attacker as part of their asset-stripping assault on Borussia Dortmund, but the scorer of the winning goal in the 2014 World Cup final is still only 27.

Gotze, who hasn’t played for Germany for almost two years now, has been on the Dortmund bench for all but two of Dortmund’s 11 games this season. Dortmund look set to tie down Raphael Guerreiro to a new deal to avoid losing him as a free agent but there appears no such urgency to renew Gotze’s terms. Lucien Favre has an abundance of options to play behind Paco Alcacer so it seems that if he wants a regular game, then Gotze will go. Everton were linked in the summer and Inter Milan are known to be keeping an eye on the former wonderkid’s situation.

6) Luka Modric
We think Luka Modric is out of contract next summer but nobody aside from his agent seems quite sure. There was a lot of noise earlier in the year that an extension to his terms had been agreed with Real Madrid while some reports claimed that his Ballon d’Or triumph automatically triggered a one-year renewal. But since Real have never firmed up any of the rumours, we have to presume the 34-year-old is inching towards free agency.

Modric has only started one Real league game this season – on the opening day of the season when he received a red card. In the weeks he has been available since, Zinedine Zidane has restricted him to bench duty and since Real are so keen to sign Christian Eriksen and/or Paul Pogba, it seems unlikely that Modric will get the contract offer he is perhaps looking for. The Croatia star can sit it out until next summer, but don’t be surprised if Florentino Perez and Daniel Levy concoct a swap deal involving Modric and Eriksen in January.

5) Thomas Meunier
The PSG right-back spent most of last summer fluttering his eyelashes at Manchester United or any of the other big clubs said to be interested in giving him a regular game. Meunier has been an inconsistent presence in Thomas Tuchel’s team so far this season, though he has started both PSG’s Champions League matches.

United opted to move for Aaron Wan-Bissaka rather than the Belgium international, but you can expect plenty of interest in Meunier should he opt to swerve a new deal in Paris. Arsenal and Everton were both linked with the experienced defender, who won’t turn 29 until next September.

4) Stefan Savic
The Atletico Madrid centre-back will be 29 next summer and has already had one crack at the Premier League with Manchester City, where he earned a title winner’s medal in 2012 despite an apprehensive start to life in English football. Savic promptly departed City for Fiorentina, before being sold on three years later to Atletico.

As you might expect under Diego Simeone’s tutelage for four years and three years alongside Diego Godin for three years, Savic is a far more rounded defender than he showed during his early appearances at City. Wait, City need a defender…

3) Dries Mertens
The Belgium star remains keen to remain with Napoli where he has become an icon. The 32-year-old is still a pivotal part of Carlo Ancelotti’s side – he’s notched four goals in six Serie A matches – and he is just one goal away from matching Diego Maradona’s haul of 115 goals in Napoli blue.

Mertens reckons he is in the best form of his career: “I’ve never felt so fresh. Maybe it is because I don’t have kids,” he said earlier this month, while also admitting that should he leave Napoli, he will also walk away from Italy. Not to China or Qatar, though: “I hope to play in Europe for as long as possible at the highest level.”

2) Blaise Matuidi
The France star will be 33 next summer when the three-year contract he signed upon joining Juventus from PSG in 2017 reaches its conclusion. But Matuidi said in the summer that he is “really happy” at Juve and Maurizio Sarri seems pretty chuffed with him since the all-action midfielder has started six of the champions’ opening seven Serie A matches.

Juve filled their boots full of free-agent midfielders this year with Adrien Rabiot and Aaron Ramsey signing big money deals, which suggests the Old Lady might prefer to save her pennies when Mino Raiola gets around to discussing an extension. You just know his first call will be to Ed Woodward.

Blaise Matuidi couldn’t find a photo of his wife to post on Twitter so he just searched into Google “Matuidi wife” 😂 pic.twitter.com/fm4tkQe6aU

1) Edinson Cavani
Might the Uruguayan be the next veteran striker to ride to Manchester United’s rescue? The last centre-forward the Red Devils signed on a free from PSG didn’t work out too badly.

Cavani will be a year younger than Zlatan Ibrahimovic when he becomes a free agent next summer. There has been talk of PSG attempting to tie the forward down to new terms but Cavani will have plenty of options. Chief among them is said to be the chance to be the face of David Beckham’s Inter Miami in their maiden MLS season, and the forward with 195 goals in 283 PSG appearances is known to fancy a stint playing in his home nation before he hangs up his boots. But like Zlatan, Cavani could do at least another year at the top level before heading across the Atlantic.