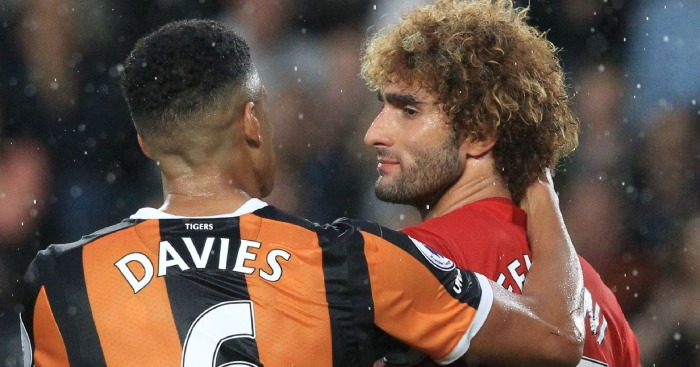 10) Michel Vorm (Tottenham)
There tends to be a panic among supporters whenever a first-choice goalkeeper gets injured or is unavailable. Like the man wearing a full tracksuit and shoes trying to sell watches down the pub, the second-choice gloveman cannot be trusted.

Trailing 1-0 after only five minutes on the opening day of the season, Spurs fans will have been cursing their luck when Hugo Lloris had to be substituted before the interval with a hamstring injury. However, Vorm has reminded everyone what a fine goalkeeper he can be, conceding only once – to James Milner’s penalty. His pace off the line to thwart Sadio Mane brought praise from all quarters. And applause from one slightly annoyed German.

Vorm has twice come out of goal with perfect timing to tackle Mane – the last piece of action brought applause from Pochettino & Klopp.

9) George Friend (Middlesbrough)
While Friend had been one of the most consistently excellent performers in the Championship for the previous two seasons, a question mark remained over whether the left-back could carry his form into the Premier League. The 28-year-old’s only previous experience in the top flight came in December 2009, when he played an hour in Wolves’ 3-0 defeat at Manchester United – a match which resulted in the club being infamously hit with a fine after Mick McCarthy fielded a weakened team (a bit unfair given United started Tomasz Kuszczak, Ritchie De Laet, Darron Gibson and Gabriel Obertan, by the way).

Seven years later and having now established himself as a left-back rather than a utility man, Friend has looked like a seasoned campaigner at this level. His energy and industry make him an invaluable asset at both ends of the pitch for Boro. Not only has he made three tackles, 3.5 interceptions and 4.5 clearances per game, but in the derby victory over Sunderland, Friend proved what a threatening outlet he can be down the flank.

If Boro are to continue their promising start to the season, Aitor Karanka will need Friend to recover quickly from the injury which forced him to miss the draw at West Brom.

8) Victor Moses (Chelsea)
For a player who has spent the last three seasons on loan at three different clubs, Moses could have been forgiven for expecting his Chelsea days to have been numbered.

With the arrival of Antonio Conte, it was thought Juan Cuadrado would be the forgotten winger to be handed a lifeline at Stamford Bridge, and yet it is Cuadrado who is set to depart once more on loan, while Moses has clearly endeared himself to Conte.

Moses may have only been handed 127 minutes of football so far this season, but it has been 127 minutes more than he has played for the Blues in the previous three campaigns, and it has already brought two goals, with the promise of more first-team action to come.

Victor Moses scored his first #PL goal for Chelsea since November 2012 in the 3-0 win over Burnley pic.twitter.com/hyD0aExXUd

7) Idrissa Gueye (Everton)
After the promise of marquee signings following the takeover of billionaire Farhad Moshiri, Everton fans can be excused for being relatively underwhelmed by the arrival of Gueye, whose name had been tainted by its association with the s**tshow which was Aston Villa’s 2015/16 campaign.

The Senegal international’s stats last season suggested he was one of the last people to blame for Villa’s abysmal season, and Gueye has thrived in a more settled environment alongside better players. The 26-year-old has injected a much-needed dose of energy and dynamism into the Toffees starting XI, making an impressive average of 5.3 tackles per game, the joint-highest in the league, while remaining tidy in possession.

It is no coincidence that James McCarthy could now leave Goodison Park.

6) Theo Walcott (Arsenal)
Arsene Wenger finally appeared to run out of patience with Walcott last season, preferring Alex Iwobi to the England international for much of the second half of the season. Wenger ultimately cost Walcott his place at Euro 2016 but it appears the Frenchman may have done the 27-year-old a favour.

Thankfully Walcott has finally accepted defeat in his attempts to convince Wenger, himself, and the general public that he is a centre-forward, while he has also benefited from a full pre-season and the late return of Mesut Ozil and Olivier Giroud.

This season Walcott has returned with a drive and doggedness rarely associated with his performances in the past. As Matt Stead’s appraisal of the winger’s defensive statistics suggests, Walcott’s transformation from a confused greyhound to a scrappy terrier is welcome for both club and country.

5) Nemanja Matic (Chelsea)
A colossus in Chelsea’s title-winning campaign of 2014/15, Matic was a pale imitation of himself last season and was linked with an exit from Stamford Bridge this summer. The arrival of N’Golo Kante only cast the Serbian’s future into further doubt, but he has instead formed an impressive partnership with the France international.

Matic may not provide the creativity of Cesc Fabregas (though he has looked very smooth going forward), but Antonio Conte is not asking for that from his central midfield. There are few more effective defensive shields than Kante and Matic, which may allow Conte to switch to a 4-2-4 formation and unleash Michy Batshuayi from the start.

4) Eric Bailly (Manchester United)
“He has progressed well to date and has the potential to become one of the best around. We look forward to working with him to help nurture that raw talent and fulfill his potential,” said Jose Mourinho after United had signed Bailly from Villarreal.

For a defender who cost around £30million, there remained an element of the unknown surrounding the 22-year-old, who had only made 52 senior appearances. Even the most optimistic of United fans would have expected Bailly to take time to adapt to English football. Instead the Ivory Coast international has taken to the Premier League like a duck to water, looking equal parts Rio Ferdinand to equal part Nemanja Vidic.

Bailly has taken only three games to look like one of the best centre-halves in the Premier League.

3) Curtis Davies (Hull City)
Michail Antonio’s inclusion and Ross Barkley’s omission may have dominated the headlines after Sam Allardyce named his first squad as England manager, but it is the lack of a call-up for Davies which is perhaps most arguable.

At 31 years of age Davies may not represent a bright new dawn of English football, but the fact remains that the defender has been one of the best performers in the Premier League this season. Not only has he helped galvanise a squad of players heading towards what was expected to be a trainwreck of a season, but he has marshalled a supremely resolute defence while playing next to makeshift centre-back Jake Livermore.

The former Aston Villa man has made a league-best seven interceptions per game and a ridiculous 11.7 clearances per game, unsurprisingly also the highest in the league. Phil Jagielka, Chris Smalling and Gary Cahill can count themselves lucky.

2) Sadio Mane (Liverpool)
Bucking the trend of Southampton players taking a while to settle at Anfield, Liverpool already look a different side when Mane starts. Direct, quick, and intense, the Senegal international is perhaps the perfect encapsulation of Jurgen Klopp’s football philosophy.

While Philippe Countinho, Roberto Firmino and Adam Lallana can provide neat touches and promising build-up play, Mane injects the incisiveness the inventive trio can often forget. His tormenting of Arsenal’s back four on the opening day was a sight to behold, and it has not taken long for the 24-year-old to relegate Daniel Sturridge to a peripheral figure on Merseyside.

1) Marouane Fellaini (Manchester United)
A strong contender for Manchester United’s least popular player since the retirement of Sir Alex Ferguson, Fellaini was largely expected to depart Old Trafford following the appointment of Jose Mourinho. And yet the Belgian has thrived under Mourinho, finally finding his niche in United’s starting XI.

The 28-year-old does not have the technical ability to play as an attacking midfielder for the Red Devils, and with Zlatan Ibrahimovic, Marcus Rashford and Anthony Martial at his disposal, Mourinho is unlikely to turn to Fellaini as an auxiliary striker any time soon.

Instead, Fellaini has been able to concentrate on using his main strength – his strength – to bully opposition midfields and ensure they cannot establish any attacking fluency, knowing there is now no longer any pressure on him to produce a creative flair he clearly does not possess. Mourinho has told United fans they will learn to love Fellaini this season; it won’t take much longer before they are fully convinced.