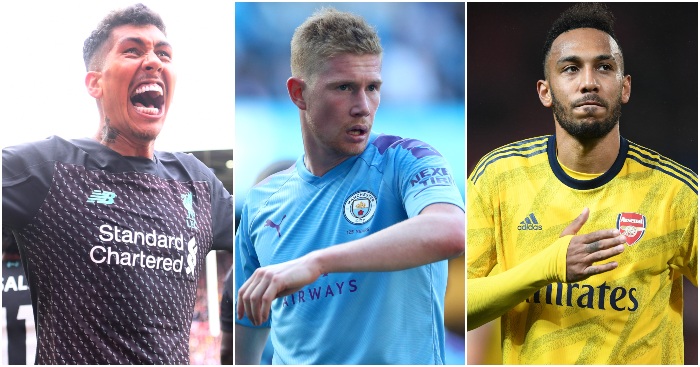 10) Teemu Pukki (Norwich City)
The former Celtic striker couldn’t hack it in the SPL but Pukki is making the Premier League look like child’s play. The Norwich forward has six in seven, keeping pace with Harry Kane and Raheem Sterling while outscoring any of Liverpool’s front three. Only Sergio Aguero and Kevin De Bruyne have played a direct role in more Premier League goals so far this season.

With the Premier League’s Player of the Month for August and Tammy Abraham hitting 13 goals between them so far, perhaps the gap between the Championship and the Premier League isn’t as great as some might have you believe. Regardless, Pukki has already proved his doubters wrong and demonstrated that he belongs in the top flight, especially while Norwich maintain the approach which brought them here; it seems perfectly tailored to the Finland star’s strengths.

9) James Maddison (Leicester City)
The Leicester playmaker has started the season like a man with a point to prove. His maiden season in the top flight was a huge success, but his form was never good enough for Gareth Southgate, who called him up, made him watch from the bench, then dropped him again.

A goal and two assists – all points-winning contributions – in his first six games saw Maddison recalled to the England squad, but again he was made to watch from the bench. “I am not going to lie. It hurt me sitting on the bench and not playing,” the 22-year-old said this week. “I have to make myself impossible to ignore.”

So far, so good on that score. His creativity is down on last season, when he created more opportunities than anyone else in the Premier League. But his form has still been good enough to help take Leicester to third and attract admiring glances from the bigger clubs.

8) John Lundstram (Sheffield United)
The Sheffield United midfielder’s form this season is all the more remarkable given he could only manage five starts in the Championship last season. Lundstram could have been forgiven for wondering if he had peaked in the second tier having played in Leagues One and Two but Chris Wilder kept dangling the Premier League carrot: “I said to him last season, if we do go up, don’t think ‘that’s me done!’ I always thought he had a part to play.”

That has proven to be the case. Lundstram has been a revelation for the Blades, scoring his first goal to give United their first win in their first home game. But the highlight for Lundstram so far was returning to Everton, the club who cut him adrift four years ago when he dropped into the fourth tier with Oxford, and bossing Marco Silva’s midfield before teeing up Lys Mousset for United’s second goal with a pass as perfect as any played this season.

John Lundstram putting it on a plate 🤤 pic.twitter.com/WqKD4KW2ab

7) Joel Matip (Liverpool)
The Germany defender began the season as Jurgen Klopp’s third-choice centre-back but his form since ousting Joe Gomez has been outstanding. Only Virgil van Dijk and Sebastien Haller have won more aerial challenges, while only Fikayo Tomori has a better success rate in duels.

Any Liverpool centre-back not named Virgil is going to struggle to get a fair share of the credit because of the reputation and class of the fella alongside them, but Klopp knows Matip’s quality, even if the rest of us took a little while longer to catch on: “Signing him on for free was maybe one of the best pieces of business we did in the last few years.”

It was thought James might take some time to adapt to the Premier League but the 21-year-old has settled in seamlessly, becoming United’s biggest attacking threat. Granted, there is little competition in that field at present, but imagine how impotent United would have been without James’ lightening pace penetrating opposition defences. Without his three goals – almost half the number United have scored from open play – Ole Gunnar Solskjaer would be under even greater pressure than he already is.

5) Tammy Abraham (Chelsea)
Frank Lampard maintains that Abraham would have been given his chance even if Chelsea had been allowed to splash the cash on a centre-forward during the summer. Make of that what you will (we don’t believe him), but Abraham deserves huge credit for seizing his chance, however it was presented.

The twice-capped England striker needed a good start to the season in a side shorn of its most creative talent and seven goals in six appearances is certainly that. Has it silenced the doubters? No, and that’s fair. Abraham needs to maintain his consistency, improve his stamina – he’s yet to complete 90 minutes in the Premier League – and finish off the big chances in the big moments, like the one he missed against Liverpool, if he is to be trusted with the job of leading Chelsea’s line on a long-term basis. But the former Swansea and Villa loanee has given himself a fantastic platform upon which to build a career with his boyhood club.

4) Pierre-Emerick Aubameyang (Arsenal)
Amid the utter chaos that is Arsenal Football Club, Aubameyang brings a reassuring reliability to a team which teases its supporters like no other. And goals. Loads of goals.

The Gabon striker has a goal per game so far this season, with 17 in his last 17 and eight in eight this season. More than the volume, the timing of his goals has vastly improved Unai Emery’s prospects at the Emirates. Of the 12 points Arsenal have gathered to take fourth place, Aubameyang’s goals have had a direct role in the Gunners collecting 11 of them.

And let's not forget about when Aubameyang did this 💪pic.twitter.com/RM0JGPnIZc

3) Roberto Firmino (Liverpool)
Liverpool’s front three tend to take their turns in claiming the largest share of the spotlight. At the start of this season, Firmino has thrust himself to centre stage, despite being outscored by Sadio Mane and Mo Salah.

“Maybe the two other forwards get all the credit for their goals, but what Bobby does for them can go unnoticed,” explained Trent Alexander-Arnold. “He is everything to us. We need Bobby to keep ticking. We need him to connect the play and join all the dots for us.”

That was most prevalent when Jurgen Klopp tried to rest Firmino after the international break. The Brazilian was summoned shortly before half-time with Liverpool mis-firing against Newcastle but the No.9’s arrival prompted everything to click for the Reds. On two of the three occasions they have won by only a single goal, it was Firmino’s strikes that made the difference.

2) Caglar Soyuncu (Leicester City)
“F*ck off Maguire, we don’t need you, we’ve got Soyuncu.” The Leicester fans may have been rather blunt in their greeting of Harry Maguire when Leicester went to Manchester United earlier this month, but you cannot argue with the overall sentiment. Soyuncu has slipped into the £80million defender’s place and proved Brendan Rodgers right in not reinvesting any of the Foxes’ windfall on a replacement.

Soyuncu struggled on the rare opportunities he was given last season but the 23-year-old Turkey defender recognised his opportunity this term and he’s grabbing it with both hands. He and Jonny Evans have conceded only five goals all season, making Leicester the meanest defence alongside leaders Liverpool. Manchester City were reluctant to spend big on Maguire but, apparently, they might be tempted to splurge on Soyuncu.

1) Kevin De Bruyne (Manchester City)
The Manchester City star looks determined to make up the time he lost to a knee injury last season. De Bruyne, arguably the Premier League’s best player, has offered eight assists in seven matches, scoring two goals himself. The one game he didn’t start was the defeat at Norwich.

Those numbers only account for the times his team-mates’ finishing has matched the quality of his creativity. De Bruyne has created 29 chances for City, six more than Trent Alexander-Arnold has managed with his relentless supply of crosses from Liverpool’s right and nine more than anyone else.

City won the lot – domestically, at least – while De Bruyne struggled last term. With the Belgian fit and firing, there is no limit to what the champions could achieve.