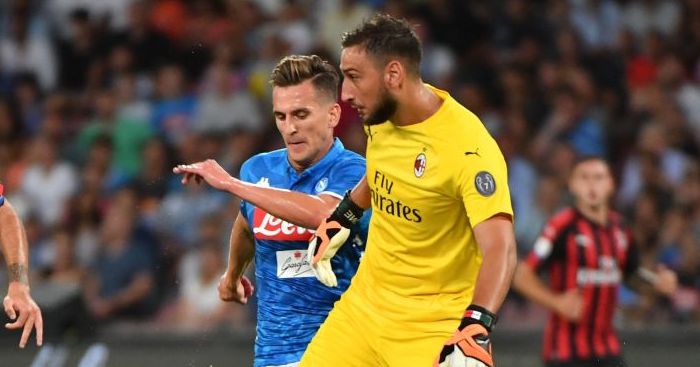 There was a time when Lucas Vazquez could have either formed part of Real Madrid’s future or at least earned them a pretty penny in the present. Unai Emery was a known admirer of a player who once interested Liverpool and ranks joint-seventh, tenth and third respectively for appearances (155), goals (18) and assists (37) under Zinedine Zidane.

The 29-year-old was incredibly useful at the height of their European dominance, starting on the left wing in a Champions League semi-final first-leg draw with Manchester City in 2016, featuring as a right-sided forward throughout 2017’s successful campaign and excelling at right-back in the final four against Bayern Munich in 2018. Vazquez even scored the opening penalty in the final shootout four years ago against Atletico Madrid but is now the definition of a versatile squad player, starting ten games for Real since the start of last season.

There will be no reconciliation for Arkadiusz Milik at Napoli, who have excluded the striker from both their Serie A and Europa League squads in response to his refusal to leave. The notoriously serene and reasonable Aurelio De Laurentiis wanted to sell a player rendered surplus to requirements by the arrival of Victor Osimhen, but a move to direct rivals Juventus was vetoed before Milik himself rejected an approach from Fiorentina.

Manchester United and Tottenham came calling late in the window and Everton are said to be considering the possibility of reuniting Carlo Ancelotti with the Pole, who scored 28 goals in 56 games for him in Naples. Milik has endured his injury troubles but the lack of a fee involved in signing one of only two opposition players to score in a major international tournament against Northern Ireland this millennium is adequate mitigation.

It came as surprise to approximately no-one that Wolves were interested in signing Otavio from Porto in the summer. Despite joining the Dragons from Internacional in 2014, it took the 25-year-old almost half a decade to fully establish himself as one of the better hidden gems in Primeira Liga. But the secret was out in 2019/20 as he helped Sergio Conceicao’s side to their first Double since 2011 with nine assists and consistent excellence worthy of a place in the Team of the Year.

Felipe Anderson referenced his new teammate directly last week while packing his West Ham rucksack, noting that he had already “sent a message” to his compatriot in anticipation of their potentially holy union. Perhaps he could return to the Premier League accompanied by Otavio in 12 months, albeit with some words of warning about having to track back for Arthur Masuaku.

47 – FC Porto midfielder Otávio has created more goalscoring chances from open play than any other player in the Primeira Liga this season (47). Generator. pic.twitter.com/ekuIHtFa79

“In the summer I thought about trying to do something else,” admitted Julian Draxler this month. “I decided that I would not dare to take a quick shot and keep looking for my chance at Paris.”

The Champions League finalist spent much of the summer being linked with Leeds but the early signs are that one final year at the Parc des Princes could rekindle a flame that has been flickering for some time. PSG lost their opening two Ligue Un fixtures, of which Draxler played 29 substitute minutes. He has started the subsequent four games, scoring twice in 12-1 aggregate victories. The fact he has only just turned 27 is news worthy of at least three disbelieving exclamation marks.

There are few more disparate teams in modern European history than Aitor Karanka’s Middlesbrough and Gian Piero Gasperini’s Atalanta. The former scored 27 goals in the 2016/17 Premier League season – only six teams have ever managed fewer – while the latter has set itself apart as an elite and pulsating attacking force.

De Roon is the unlikely common denominator, lending his combative style, injury-time equalisers away at Pep Guardiola’s Manchester City and winning strikes in Tees-Wear derbies to relegation in one season before anchoring a team founded on ludicrous excitement the next. He remains an integral safety net among acrobats at club and international level and could restore an unfairly tarnished reputation in England alongside someone other than Adams Forshaw or Clayton.

Newcastle perhaps came a little too soon for a 22-year-old with barely 100 top-flight career appearances to his name in 2015. The weight of expectation that once partnered an eight-figure fee for a player arriving at St James’ Park was a burden few could bear. Thauvin tried to quite literally style it out by donning a tuxedo ahead of a game against Watford, much to the chagrin of Alan “it was funny on the first day of the season, it’s not funny anymore” Shearer. But three Premier League starts was all Thauvin could manage before returning to Marseille on loan within five months.

The 27-year-old deserves immense credit for rebuilding his career and confidence thereafter. His development has been startling, from 28 combined goals and assists in 2016/17 to 43 in 2017/18 and 27 in 2018/19, before injury derailed him once more last campaign. Thauvin crowned his triumphant comeback with the only goal in September’s Classique as he looks to persuade Steve Bruce to give him a second chance.

Seems as if Florian Thauvin will be available on a free transfer next summer and on a pre-contract deal in January. Milan are constantly keeping tabs on him.

He is still 27, can perform at the top level for about 2 or 3 years now. For free, will be a smart signing.

Eyelashes were fluttered and chat-up lines rehearsed but neither Depay nor Barcelona could muster up the courage or the means in the end to consummate a marriage that made plenty of sense. Lyon seemed ready to sell a marketable player who wanted to leave, there just weren’t enough sofas in Catalonia for Ronald Koeman to frantically search for spare change.

“It was pretty close,” the 26-year-old has since said. “We don’t need to go into all the details but there were certain rules that prevented it, unfortunately. Soon we’ll be in January. It’s not that I’m definitely going, but it’s likely there will be clubs in for me soon,” he added. A cynic might suggest he is looking to leave.

About four and a half years passed between Uli Hoeness finishing his prison sentence for tax evasion and him insisting David Alaba’s contract stand-off with Bayern Munich “is really all about the money”. Few do satire quite like the perennial Bundesliga champions, who cry blackmail when a player wants to leave them but believe signing Callum Hudson-Odoi is their divine right.

It is a sad situation for Alaba, whose performances have notably suffered as negotiations stall. For his part, he wants to “find a solution as soon as possible”. There is only so much Treble one man can cause before he feels he has to move on.

In a world where few seem truly content with the identity of their goaltenders, the imminent availability of a 21-year-old keeper with more than 200 appearances and Italy’s No.1 jersey ought to pique the interest of clubs across the continent. Donnarumma would improve all but a few choice teams and an agent like Mino Raiola will happily put that point across.

Milan director Paolo Maldini admitted recently that the Rossoneri “must try” to keep their “leader”, although “we are not in a hurry” to push negotiations through. They will have learned from the absolute debacle that preceded his last contract renewal four years ago. But rivals will be free to talk to Donnarumma – and Raiola – in a matter of months. That would hasten the plans of anyone, particularly excitable Everton fans who have watched three years of Jordan Pickford.

It was only ever more of a short-term compromise than a long-term resolution. Messi broke the impenetrable seal this summer and while Barcelona managed to shove the genie back in the bottle in a panicked rush, the same will surely not be true less than 12 months on.

Messi has become more outspoken: against the regime and the decisions it has made but also just in general. He is no longer content with parroting the same line as a club that considers itself to be special. And much of the biggest obstacle to his departure this year will be gone at the end of the season. La Liga can step in and underline the release clause of a player under contract but would be powerless to stop an upcoming free agent discussing terms with who he likes in January. The astronomical figures involved in terms of wages still rule out most clubs but some creative accounting from Manchester City or PSG can comfortably bypass that. It was once unfathomable Messi would ever leave; it now seems implausible that he stays longer than is contractually necessary.