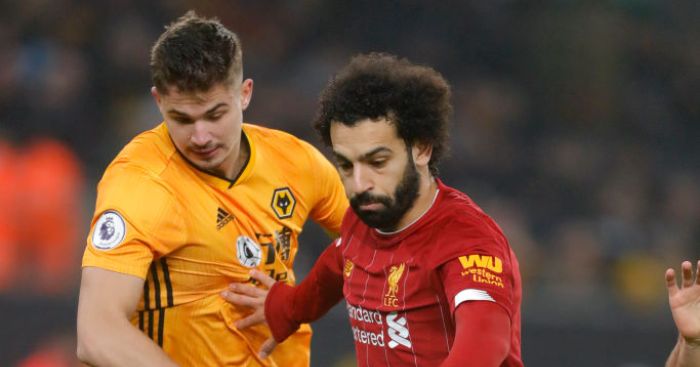 If Jamie Vardy does not donate his body to medical research then this will all have been for nought. He sees the suggestion that footballers are past it at 30 and treats it like that corner of The Hawthorns, mocking it with the gusto of a man fuelled by port, Red Bull and cheese and ham omelettes.

Only Teddy Sheringham (77), Frank Lampard (82), Alan Shearer (84) and Ian Wright (93) have scored more Premier League goals than Vardy (76) after turning 30. The Leicester striker is hunting down Shearer’s record for most strikes as a 33-year-old as if it was a Manchester City centre-half defending a long ball over the top. There are surely no players who keep things quite as simple. There are certainly none who remain so effective against all manner of opposition.

It took all of two and five weeks respectively of this campaign for Patrick Bamford to surpass his previous entire career tally for Premier League goals and starts. The 27-year-old scored once across four separate top-flight spells with Crystal Palace, Norwich, Burnley and Middlesbrough, the end of each reading like a football-themed rhyme to remember the fates of Henry VIII’s wives: terminated, relegated, over-educated, relegated.

Marcelo Bielsa and Leeds have breathed new life into a player who had long been consigned to the purgatory between Championship and Premier League, forever bound to share finishing drills with Jordan Rhodes and Sylvain Ebanks-Blake. His surprise hat-trick might soon look perfectly predictable if that form proves to be as permanent as his class.

Nuno found Max Kilman down the back of his Portuguese sofa but Leander Dendoncker has long been hiding in the plain sight of a first team furnished with more obvious talents. Raul Jimenez, Adama Traore, Ruben Neves, Joao Moutinho and Conor Coady supply the headlines but the Belgian provides one of the most compelling stories.

Dendoncker started just 17 Premier League games in his first season before featuring in every single Wolves match outside the League Cup in a debilitating 2019/20 as his ability to play in both central defence and midfield established him as a crucial and versatile option. The 25-year-old has started five league fixtures this campaign, with Wolves losing the only two he either sat out completely (the 4-0 defeat to West Ham) or graced only as a late substitute (the 3-1 defeat to Manchester City). They have conceded just once with him on the pitch: Jacob Murphy’s last-gasp free-kick for Newcastle last month. Gone are the days of the unbreakable Neves-Moutinho tandem.

“Mo has played an incredible season so far, and he developed again as a player from that pure goalscoring machine to a more connecting player, very important for us. He is the hardest working, can go and go again, uses his speed but technique between the lines as well.”

Jurgen Klopp is right. In terms of combined shots taken and chances created, Salah (50) leads the way ahead of second-placed Harry Kane (45) so far this season and even manages not to endanger opponents when trying to win vaguely questionable penalties. He is absolutely sensational, definitely under-appreciated and should keep ignoring those who continue to pretend that selfishness is an undesirable trait in an elite athlete who automatically raises the level of every teammate he adorns with his presence.

Jose Mourinho might not have been listing his theoretical transfer targets in order of preference when, in December 2018, he lamented that Manchester United could no longer exert their market authority over teams like Tottenham. But just short of two years later and with the Portuguese having swapped managerial roles, it boggles the mind as to how Son could possibly have come after Dele Alli or Christian Eriksen either subconsciously or by design.

Those two were more important and prevalent in different Tottenham teams, of course, but Son has combined the best traits of both – skill, creativity, technique, directness – with unerring finishing, remarkable team ethic and speed of thought and action, to become almost the archetypal Mourinho player.

Perhaps Wayne Rooney had a point about Dominic Calvert-Lewin’s international prospects. England might have eventually come to appreciate a player with no discernible weakness but Everton have long had faith in someone whose development has been far from linear.

Calvert-Lewin was signed by Ronald Koeman after spending the previous season in Leagues One and Two. He has played for six different managers at Goodison Park, paying his dues on the wing before someone figured the fast, strong, 6’1″ kid with a prodigious leap and magnetic feet might fare well as a centre-forward. Carlo Ancelotti has only refined the 23-year-old further, simplifying his game to that of a pure scorer. With goals in wins, draws and defeats against the champions, mid-table fodder and promoted sides in just seven games, few would argue it has been anything but a resounding success.

In a season that has sought to challenge the entire concept of defending, Jannik Vestergaard is the outlier. He is the exception to the rule of struggling centre-halves, helping carry Southampton to an excellent start after coming on at half-time of the 1-0 defeat at Crystal Palace in which Saints were already behind, while being given a seat on the bench for the 5-2 loss to Tottenham.

Ralph Hasenhuttl has restored the Dane to his starting line-up in each of the five Premier League games since and Southampton’s record of W4 D1 L0 F12 A6 in that time shows why. “He is a role model for never giving up and for developing your game,” the manager said last month of a player whose reputation was shattered seemingly beyond repair last season. The renaissance has been quite wonderful.

Thank the lord Ancelotti did not seek the summer advice of Richard Keys, thus avoiding a farcical alternate reality whereby Everton signed the Neil Custis-baiting Troy Deeney instead of the slick, sleek and stylish James Rodriguez. The hairy-handed one was right in suggesting ‘he’ll look great when the Toffees are 2-up at home,’ but he underestimated just how good the Colombian would be in narrow wins at Tottenham or Crystal Palace.

It is easy to scoff in hindsight at those who were ‘not convinced’ Rodriguez would adapt to the Premier League, but few honestly thought he would acclimatise to new surroundings so quickly. He has challenged perceptions as effectively as he has defences.

No right-back can definitively claim to have had the better of Jack Grealish this season. Stuart Dallas came closest for Leeds but was still powerless to stop the 25-year-old on occasion during one of the Aston Villa captain’s more underwhelming performances. The rest, from George Baldock to Timothy Castagne and Kyle Walker-Peters, with disastrous detours at Kenny Tete and Trent Alexander-Arnold, were thoroughly outclassed.

Grealish has been phenomenal, arguably Villa’s best player in each of their six fixtures thus far. If he isn’t skewering a team with a crisp shot or incisive pass he is piercing them with mesmeric footwork: Bukayo Saka (9) is the only Arsenal player to have completed more dribbles all season than Grealish managed against Leicester in 90 minutes (8). Most worrying or exciting, depending on allegiances, is the fact he is only getting better.

“That’s gotta be…that’s gotta be Kane,” screamed Vince McMahon in October 1997 as he predicted who the best player would be after seven games of the 2020/21 Premier League season. It really is difficult to argue with him in all honesty.

It’s not even particularly close. Kane has been nigh-on immaculate at times, giving and receiving at the tip of a Tottenham attack most felt Jose Mourinho would inhibit rather than encourage. The 27-year-old has refined that dormant creative dimension to his game at no cost to his ruthless instincts, an enforced rest at the end of last season merging beautifully with a more varied and deep frontline to form a player no-one realistically expected to improve on what was already approaching generational brilliance. Yet here we are, with Kane fully astride the Premier League and having his way with those who dare defy him once more.