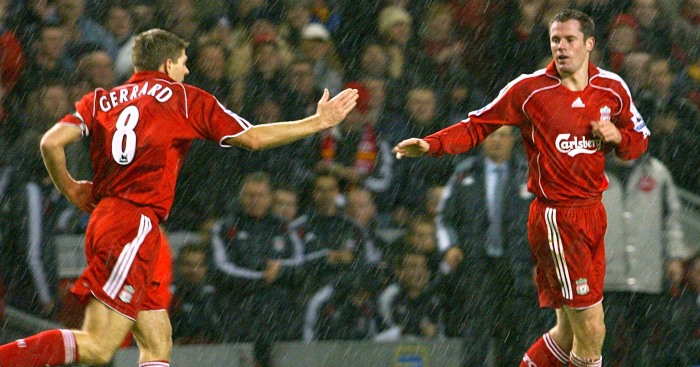 In the last week, Benjamin Mendy scored his first ever Manchester City goal, Joel Matip netted his first in 16 months and Christian Benteke grabbed a very rare double. The ten below rarely hit the onion bag…

1) Jamie Carragher is in the red
Liverpool’s working-class hero scored seven own goals in his 737-game career for the Reds, including a ghastly double at Anfield in the 1999 defeat by Manchester United. Carra’s last goal at the right end was in the 2008/9 season, although he almost finished his career in style against QPR in 2013 with a 30-yard screamer. Steven Gerrard pointed out: “Carra is the best defender I’ve played with at Liverpool and the worst finisher I’ve ever played with!” He did manage to score past Gianluigi Buffon once, mind – in an Under-16 England game against Italy.

He also did something else I dreamed of- scored 2 at the Kop End for United … https://t.co/sExBgnr0k3

2) Saido Berahino suffers a bout of Pulisball
Others have had worse goal droughts, but this one was made more memorable by circumstances. It seems aeons ago that Berahino burst onto the scene at West Brom and was actually ahead of Harry Kane in the England U21s p-cking order under Gareth Southgate. As Serge Gnabry might say: “Don’t get on the wrong side of Tony Pulis.” That’s exactly what happened when the striker’s move to Tottenham fell through in 2015. Everything changed as Pulis moaned: “We never picked him again because his fitness levels, mental levels, were never what we wanted.”

Despite a move to Stoke under Mark Hughes, Berahino did not score from February 27 2016 to August 28 2018 as the Potters were relegated to the Championship. Right-back Moritz Bauer offered a liquid incentive to supporters if he didn’t hit the net before the end of 2018. (Un)fortunately, he did.

3) John Jensen: The one-goal sensation
The curly-haired assassin scored in his 98th game for Arsenal and then went goalless for the next 40 too. He was the Gunners’ only summer signing in 1992, the year that Jensen notched a worldie for wild cards Denmark in the European Championship final against Germany. However, Highbury fans soon clocked that the not-so-great Dane was another plodder in a pudding of George Graham’s slow-moving cement mixture midfield. Commemorative ‘I was there’ t-shirts were produced to mark the occasion on New Year’s Eve 1994 when he did finally score – in a 3-1 loss to QPR.

25 years ago today the erratic Dane did this in a 3-1 loss to QPR. It was his only goal in 138 appearances.

4) Erik Edman lets fly
Edman’s only goal outside of Sweden in 329 appearances was an absolute corker for Tottenham against Liverpool in April 2005. It was officially measured at 38.17 yards as it flew past a startled Jerzy Dudek. “It flew off my boot so fast, that at first I didn’t realise it had gone in,” Edman later said in an interview. “As I normally never scored I had not prepared a way of celebrating!”

Edman left for Rennes but returned to White Hart Lane in 2009 as a Wigan player and suffered a nightmare homecoming as the Latics were battered 9-1 with Jermain Defoe scoring five.

5) Lucas scratches his seven-year itch
Liverpool’s former utility man Lucas ended a goal drought of 2,316 days against Plymouth in the FA Cup third round replay of 2017. When BT Sport’s Des Kelly (you know, that guy who is Jurgen Klopp’s best friend/worst enemy depending on the German’s mood) reminded the defensive midfielder of this gap in productivity, the Brazilian was genuinely shocked, replaying: “Is it that long?”

Overall, he managed one in 247 league appearances for the Reds. He did manage to bag another one in the FA Cup…against Havant and Waterlooville. However, after leaving the mighty Reds in the summer of 2017, his newfound confidence infected his shooting boots, as he scored an outrageously cheeky backheel for Lazio in the Europa League just a few months later.

6) Tony Hibbert’s testimonial breaks his duck
Tony Hibbert joined Everton at primary school age and his senior career spanned 16 years without a competitive goal. The drought contributed to his cult hero status among Toffees fans, to the extent that a banner reading ‘If Hibbert Scores, We Riot’ was displayed at the 2009 FA Cup semi-final against Manchester United. Hibbert’s big moment finally came in his testimonial match against AEK Athens in 2012 when he belted in a free-kick. The promised pitch invasion ensued…andHibbo wasn’t that bothered: “I’m a defender and when I think about the amount of times I’ve saved a goal, I must have cleared about 100 goal bound shots off the line in my career. No-one ever talks about them.”

7) Phil Jones ends six-year wait as Tranmere hit for six
Tranmere’s goalkeeper Scott Davies, a Manchester City fan, had questioned the mentality of their opponents the day before this fourth-round FA Cup tie. That was unwise to say the least. Even Phil Jones scored in a 6-0 rout after a header at the far post from an Andreas Pereira corner. It was his first goal in 2150 days.

Such was his total disbelief, the central defender had no idea how to celebrate and carried out an awkward finger salute to the sky.

The Rovers keeper bumped into Ole Gunnar Solskjaer outside the changing rooms at Prenton Park following the game where the United boss told him: “Thanks for helping us fire up the fans and the players.”

8) The evolution of Francis Benali
A prolific scorer in his youth, Southampton’s legendary full-back actually started as a striker and scored on his debut as an England schoolboy. “I guess my game evolved from being a free-scoring youngster into, a tough tackling, aggressive defender. I slotted into that more naturally than the creative side of the game.”

After 284 games for the Saints, Benali finally managed to score a header against Leicester in December 1997 from a Matt Le Tissier assist. His final career tally for Saints stood at 311 appearances, one goal….and 11 red cards.

9) Rob Jones can’t hit a barn door
Liverpool’s highly rated full-back was capped eight times by England and was described by Steve McManaman as the best defender he had ever played with. In 243 matches for the Reds, Jones never scored. While he was watching highlights of the 2-0 win that denied the Manchester United the title in 1992, Jones remembers: “Brian Moore was commentating and he summed things up perfectly: “Rob Jones, ohhhhhhh…he’s never scored for Liverpool and with shooting like that he never will.”” Described as the best right-back England never had, Jones’s career was crippled by injury and he retired at 28. His autobiography was called: ‘Robbed.’

10) Cheick Tiote scores the fourth in the north
The popular Ivorian suddenly passed away from a cardiac arrest at the age of 30 in 2017, just four months after leaving Newcastle. He turned out for the club 156 times over almost seven seasons. At one point, his only hot numbers were being compiled in the referee’s book, averaging a yellow card every two league games. His shooting boots were not on fire, but his solitary goal, a 25-yard volley against Arsenal, has gone down in folklore as it sealed an incredible comeback, securing a draw after being 4-0 down.

🗓️ #OnThisDay in 2011, Newcastle United came from four goals down to draw 4-4 with @Arsenal in the @premierleague. The late Cheick Tioté scored this stunning late leveller. #NUFC pic.twitter.com/zrpFu47bM2