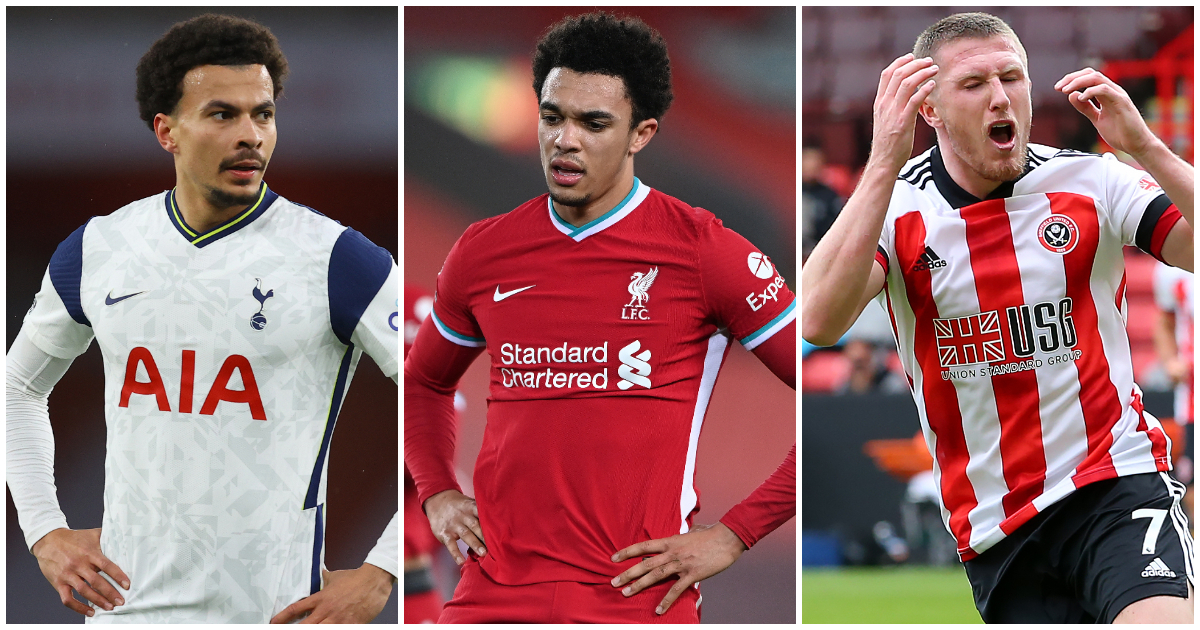 10) Mason Greenwood
The Manchester United striker is hardly the first talent to suffer a dose of second-season syndrome. But Greenwood’s form has dropped off considerably from the peak of his maiden first-team campaign.

His goalscoring tally offers the clearest illustration of his recent struggles. Last year, in his breakthrough season, Greenwood scored 17 senior goals. This year, he has managed only four – single strikes in each of the Premier League, Champions League, FA Cup and League Cup.

Greenwood doesn’t appear to have been playing with the freedom of youth that so endeared him to United fans last year. During the early part of the season, off-the-pitch headlines dogged the 19-year-old and a lack of consistency – in terms of his position and playing time – hasn’t helped.

There are few doubts at Old Trafford that Greenwood will come good but chances offered by Anthony Martial’s inconsistency and Edinson Cavani’s apparent lack of appetite need to be taken between now and the end of the season.

9) Issa Diop
Around 18 months ago, Diop was rated at £75million by West Ham. But more recently, the centre-back has spent most of the season in the shadow of a loan signing who couldn’t get in the Watford side at the start of the season.

Craig Dawson has been a revelation for David Moyes, with his partnership with Angelo Ogbonna being one of the biggest factors in West Ham’s surprising push for Europe, all the while relegating Diop to the bench.

An injury to Ogbonna has given Diop the chance to stake his claim for a place that last season seemed certain. And so far, the 24-year-old has done his cause no harm. But waiting for misfortune to fall upon Ogbonna or Dawson was almost certainly not how the defender, described by Jose Mourinho as ‘a monster’, envisaged his season.

8) Tammy Abraham
The England striker certainly benefitted from Frank Lampard’s appointment at a time when Chelsea were unable to sign a new striker. A season and a half later, though, with Lampard gone, Abraham looks set to follow his former manager out of the Stamford Bridge exit door.

Thomas Tuchel gave Abraham a chance to stake his claim for a place in his attack, offering the 23-year-old three starts and a substitute appearance in his first six games in charge. In the four games since: nothing.

Abraham has struggled for fitness, which perhaps simplifies the issue for Tuchel. The new manager prefers a central striker who can drop deeper, which Olivier Giroud can do better than Abraham. Though the French forward is also now watching from the sidelines while Tuchel plays Kai Havertz through the middle.

Havertz is one player whose reintegration is being carefully managed. Christian Pulisic is set to be Tuchel’s next project. Abraham is unlikely to be afforded the same attention.

7) Matt Doherty
The right-back was one of the Premier League’s most consistent performers in the two seasons he played all but two games for Wolves. When he joined Tottenham for around £15million in the summer, it was a move widely seen as Wolves’ loss and an astute way for Spurs to address what has been a problem position.

Those views, like Doherty’s affinity for Arsenal, have been hastily revised. His performance for Spurs in the derby on Sunday only served to heighten suspicions that the Republic of Ireland defender was a not-so-secret agent for their fierce rivals.

Doherty was dire, and not for the first time. Rather than solve Spurs’ right-back problem, he has exacerbated it. Reports suggest Mourinho is looking to offload the 29-year-old this summer if his form doesn’t improve. At the Emirates, the signs were not good.

6) Roberto Firmino
All Liverpool’s front three have been misfiring horribly of late. But Mo Salah still somehow leads the race for the Golden Boot while Sadio Mane has weighed in with 18 goals and assists in all competitions.

Firmino’s form has certainly left him the most susceptible of the three if Jurgen Klopp is looking to freshen things up. And against Wolves it was Jota who started and Jota who scored, though the Brazilian was missing through injury.

Firmino has netted only six goals across all competitions; Jota has ten in a fraction of the appearances. And while Firmino’s allies have always maintained that the Brazilian offers more to Liverpool than just goals, questions over his overall contribution continue to mount.

“Bringing others into the game has dropped off and the counter-pressing and winning the ball back has dropped off too,” observed Jamie Carragher back in January. “He is the one I’m worried about more and if there is one to be phased out before the others, I think it would be Firmino.”

5) Aymeric Laporte
For much of Laporte’s Manchester City career, the centre-back has been one of the first names on Pep Guardiola’s team-sheet. Not only because he was one of the few centre-backs on the books, but the Frenchman has been superb since signing from Athletic Bilbao in January 2018.

But Laporte’s stock has fallen considerably this season. Last term, injuries didn’t help and his absence was thought to be one of the key factors behind City choking on Liverpool’s dust. His fitness has also been a concern this campaign but the primary reasons behind Laporte having made only 11 Premier League starts are the emergence of Ruben Dias and the resurrection of John Stones.

Laporte is now third choice when it comes to City’s defensive partnership and while Guardiola could play all three as he did at Fulham on Saturday, there is no question that the 26-year-old’s standing is no longer what it was. Real Madrid could open the door to welcome Laporte to the Bernabeu in the summer if he remains the odd man out.

4) Dele Alli
The Tottenham star has spent much of the season on Jose Mourinho’s sh*t list and though he has earned a little more faith from the manager of late, Alli still remains on the fringes of a team for whom not so long ago he was one of their most important players.

Alli has managed only two starts, with 25 games between each. The first came on the opening day of the season when he was hooked at half-time. Jose being Jose, he retained his grudge and though a tendon injury hardly helped, it wasn’t until the trip to Fulham earlier this month that the 24-year-old was named in the XI once more.

In between, Alli seemed set to leave Spurs in January and had it not been for Daniel Levy, Mourinho would likely have driven him to Paris to palm him off on Mauricio Pochettino. Alli is now left hoping either that chance arises again in the summer or Mourinho goes before he does.

READ MORE: One per club – players stuck after the winter transfer window

3) Mat Ryan
The Australia goalkeeper’s slump was as sudden as Robert Sanchez’s rise. Ryan began the season as Brighton’s No.1, a role he fulfilled dutifully for three-and-a-half years, but he quickly became Arsenal’s No.2.

Ryan started the campaign poorly. In 11 games, he conceded 19 goals while his save percentage was a Premier League low of just 50%. It was apparent that Ryan required a breather, but Graham Potter went even further. Not only did he drop the No.1 ahead of the visit to Fulham in December, the manager relegated Ryan to fourth choice and put him immediately up for sale.

The Socceroos stopper could barely believe his luck when Arsenal, his boyhood club, came in with the offer of a place on their bench, which was a step up from the AmEx stands. In his place, Sanchez has excelled, so much so that the former Rochdale keeper has earned his first call-up to the Spain squad.

2) John Lundstram
Lundstram is in good company at Sheffield United when it comes to regression. Enda Stevens has gone from one of the best wing-backs in the Premier League to arguably one of the worst, while Oliver Norwood has struggled similarly.

But Lundstram’s form has perhaps nosedived more steeply than anyone’s. The midfielder scored five goals and laid on another three last term, with his output this season dropping to a mere pair of assists.

His demeanour has been even more concerning than his stats. Lundstram is in the final year of his contract and having turned down the Blades’ offer to become, as Chris Wilder put it, ‘one of the four or five highest-paid players at the club’, many fans feel the 27-year-old has zoned out, with one eye already on free agency.

1) Trent Alexander-Arnold
So rapid as Alexander-Arnold’s ascent been that perhaps a dip was inevitable. But to label his form this season a mere dip is being very kind to the Liverpool’s right-back.

Former Red Steve McMahon wasn’t in the mood to be so generous to the 22-year-old last month: “Maybe the hype has got to him, I’m not too sure, but certainly his performance levels have dropped dramatically whether or not it’s the team’s performance or what.”

Of course, Liverpool’s wider problems are bound to have affected Alexander-Arnold’s form. Without the security of fit-for-purpose centre-backs inside him, the right-back has perhaps struggled to get into the areas in which he did so much damage last season. In their title-winning season, Alexander-Arnold weighed in with four goals and 13 assists following a dozen assists the year prior to that. This campaign, he’s on one goal and three assists.

Another summary of his struggles in stat form: Alexander-Arnold gave the ball away 45 times during the calamitous defeat to Leicester last month. No player in Europe’s top five leagues to have had more than 100 touches in a single match had given the ball away as much. It set a new record in the Premier League, which already belonged to Alexander-Arnold after he gave Southampton the ball 38 times at St Mary’s.