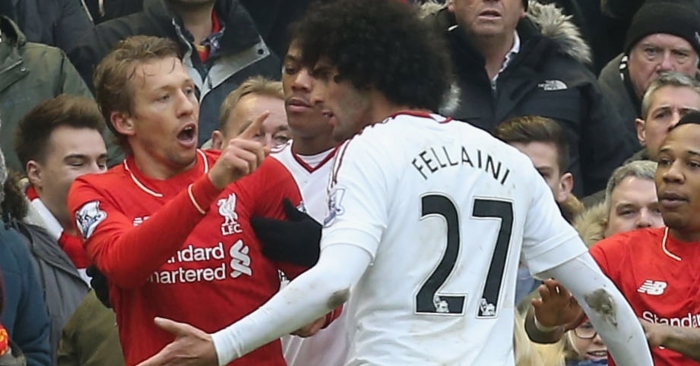 10) Claudio Bravo
Bravo wasn’t necessarily a scapegoat – he was simply rubbish during his season in the sticks at the Etihad – but the Chile goalkeeper makes this list because we are short of Man City representation. Maybe City fans have just become more accustomed to watching crap over the years.

But they did let Bravo have it after six months of calamity upon replacing Joe Hart, with the ex-Barcelona keeper getting ironic cheers and applause after performing the most routine duties in an FA Cup win over Huddersfield in 2017. By that point, even Pep Guardiola had recognised that his recruit wasn’t doing the business and Bravo had been dropped after conceding nine goals from 14 shots on target.

At times, a Weeble placed on City’s goal-line might have been a more effective last line of defence. Yes, he could pass a ball, but stopping one occasionally is not too much to ask of a goalkeeper. Still, had Bravo not been quite so wretched, then City might not have gone for Ederson.

9) Lucas Leiva
Was Lucas the first Jordan Henderson, or is Henderson the new Lucas?

Regardless, the Brazil midfielder accepts that you can’t please everyone: “Thinking as a player, you have to say ‘you should support for 90 minutes’. But as a fan, it’s really hard to be positive and not say ‘you’re sh*t’!”

Eventually, Liverpool fans came to overlook Lucas’s shortcomings and forgave him for not being Steven Gerrard or Xabi Alonso. Or even Javier Mascherano. When he left the club in 2017 as its longest-serving player, he was given a hero’s send-off, which seemed most unlikely when towards the start of his ten-year Reds career he was to blame for anything and everything that went wrong around Anfield.

8) Alberto Moreno
The Spain left-back had a nightmare first two years at Anfield which were crowned by an absolute horror show in the Europa League final in 2016. Whichever Liverpool scout identified the £12million signing from Sevilla apparently missed the glaringly obvious fact that Moreno couldn’t defend.

Initially, Moreno saw no need. But the penny dropped. “Maybe in my first few years at Liverpool, I was always thinking: ‘Attack, attack, attack.’,” he told the Guardian. “Now I’m like: ‘First, let’s defend, keep a clean sheet and, then, let’s go forward.'” Perhaps it was watching James Milner put on a clinic at left-back throughout Jurgen Klopp’s first full season that made Moreno see the error of his ways, but when he got a chance at the start of last season, he wasn’t quite so horrendous as many feared. But then Andrew Robertson was deemed ready for the first team and Moreno was back to bottle-flipping on the bench.

Liverpool fans have always found it hard to hammer Moreno – but not impossible – on account of the fact that he seems a good egg. But whatever credit he had built up with the Kop was wiped out when he had a pop at Klopp at the end of last year, which is the quickest way to burn red bridges on Merseyside.

7) John Obi Mikel
Once they had got a good look at Mikel, Chelsea fans were left wondering why the club had made such a fuss. The Nigeria midfielder eventually joined the Blues having initially agreed to sign for Man Utd, with the Red Devils insisting his commitment extended way beyond a verbal agreement. In the end, Chelsea agreed to pay Lyn Oslo £4million and United £12million for a player who had worn a red shirt only once at a press conference in Norway.

You couldn’t blame Chelsea supporters for checking whether the club had kept the receipts because it soon became clear that Mikel didn’t do a great deal. Meanwhile, Jose Mourinho got busy converting Mikel into a defensive screener from an attacking midfielder, not that you saw much evidence of any lingering offensive instinct during ten years at Stamford Bridge.

Mikel was in and out of the Chelsea team, making the starting XI roughly two-thirds of the time he was included in the match-day squad. But he was always on hand when Chelsea fans needed an outlet for their frustration between eight major honours in his decade-long Blues career.

6) Moussa Sissoko
“He got a bit of flak, sometimes perhaps unfairly, and he became a bit of a scapegoat.” Ben Davies understated the issue somewhat. Spurs fans thought he was sh*te and they weren’t shy in telling everyone so.

In fairness, their argument wasn’t entirely without merit during Sissoko’s first two seasons at the club. On deadline day in 2016, they thought their club had signed the all-action, marauding midfielder who was France’s best player in the Euro 2016 final, but Sissoko’s early performances in a Spurs shirt led many to the conclusion that Daniel Levy had paid £30million for an imposter.

Such form cost Sissoko his international place and he was nowhere to be seen when France were celebrating their World Cup triumph in Russia. That, and the burning desire to prove his many detractors wrong, has inspired the midfielder to win over the Spurs fans in the last 12 months, going from much-maligned scapegoat to cult hero.

5) Fernando Torres
The Spain striker won the European Cup, Europa League and FA Cup during his time at Stamford Bridge, with his goal in the Champions League semi-final at the Nou Camp living long in any Chelsea fans’ memory. But that wasn’t enough to save Torres from the jeers and derision of the home support a year later when he was substituted during a League Cup semi-final.

Frustration with the £50million signing was understandable. Chelsea expected more than 20 goals in 110 Premier League appearances from the former Liverpool striker, who looked a shadow of his former self once he left Anfield. The only man Chelsea supporters distrusted more than Torres was Rafa Benitez, and the suspicion was that the Spanish boss had been hired with his former striker in mind.

“I’m torn, I could never boo a player in a blue shirt,” said Trizia Fiorellino, the chair of the Chelsea supporters group, after Torres was jeered by his own fans. “But I can understand those who booed him. We have backed him unequivocally for two years and made every excuse under the sun for him, perhaps he was not match fit. A lot of fans think Benitez’s appointment was to get the best out of him and if anything he’s become more immobile, it’s like he has given up.”

4) Phil Jones
“Jones, arguably the way he is looking, could be our best ever player. I think Jones may be one of the best players we have ever had, not matter where we play him. At 21 years of age, he is going to be a phenomenal player.”

Sir Alex Ferguson really didn’t do Jones any favours there back in 2013. The former Blackburn youngster looked quite a prospect, but to go on record in predicting that Jones could achieve the kind of success that would see a (gurning) statue built at Old Trafford was setting the youngster up for a massive fall.

Of course, Jones has not been able to hit anything like those heights but the derision sent his way by some United supporters is plain weird. Injuries haven’t helped and the fact he pulls funny faces while blocking shots or challenging for headers makes him an easy target in this era of ‘amusing’ gifs. Presumably Virgil van Dijk always smiles for the camera when he’s planting his noggin’ on the end of a 60-yard hoik? And, of course, he will forever be remembered for that challenge on Olivier Giroud, which was actually a brilliant bit of improvised defending.

He’ll never be up there with Edwards, Best, Law, Charlton, Robson, Cantona and Ronaldo. But that’s some pretty rarefied company he never had a chance of keeping.

Disaster, absolutely disaster. Worst renewal in the history of this club @ManUtd

3) Jordan Henderson
“Even a section of Liverpool fans still question him,” says Phil Thompson. “When anything goes wrong, Jordan always seems to be the one who gets the blame. He’s the one people point the finger at.”

The Kop isn’t entirely convinced by their captain and, to be fair, nor was his manager in 2012. A year after signing for Kenny Dalglish, Brendan Rodgers wanted to offload the midfielder to Fulham to facilitate a deal to sign Clint Dempsey. The determination Henderson showed to prove Rodgers wrong and improve upon his weaknesses is a hefty reason why the former Sunderland midfielder now wears the captain’s armband three years after that manager was axed.

Still, Henderson remains a divisive figure. Some, like Steven Gerrard, reckon his work-rate makes him a “Klopp-type player”, while his detractors insist he’s a busy pointer and shouter with few other redeemable qualities for a team looking to win the biggest prizes.

2) Emmanuel Eboue
A substitute being substituted is widely accepted as the most humiliating experience for a footballer. But Arsenal fans shovelled salt into Eboue’s gaping wounds by jeering him on his way as he returned to the bench during a narrow home win over Wigan in 2008.

By turning in a bewilderingly bad performance, Eboue was the lead architect in his own downfall but Arsene Wenger was certainly in on the job too. The Arsenal boss hooked his 32nd-minute substitute in the 90th minute. The job was done, Arsene, FFS.

Keen to show that not all them were horrible b*stards, many Arsenal fans immediately began overdoing it with the Eboue worship to the point that he remains a cult hero. The truth, as ever, lies somewhere in the middle.

1) Marouane Fellaini
Poor Marouane. The big Belgian was seen as the symbol of Manchester United’s decline and because he was forever linked to David Moyes and his disastrous attempt to replace Sir Alex Ferguson – not that Peter Schmeichel saw it that way – Fellaini never really stood a chance at Old Trafford.

He didn’t help himself sometimes and under Ferguson, Fellaini would never have been signed. But the big man has some big balls. Even when he was booed by his own supporters, his effort never wavered, despite many of his team-mates downing tools for different managers. When Louis van Gaal and Jose Mourinho looked around the dressing room for players they could trust, Fellaini was front and centre.

And he had his uses. When United needed a battering ram – which has been at regular intervals in recent years – Fellaini was the first to put his hand up to run through brick walls. But that wasn’t enough for some United fans, who greeted his exit last month with more enthusiasm than any of his 22 goals.