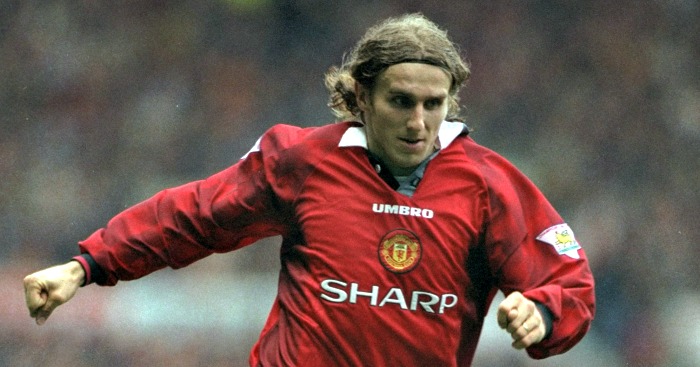 10. Zlatko Zahovic
For England, the ‘Golden Generation’ describes the period in the early 2000s when the national team boasted a more impressive pool of talent than ever seen before. Rio Ferdinand, Steven Gerrard, Frank Lampard, Paul Scholes, the Neville brothers, Michael Owen, Wayne Rooney, Danny Mills and numerous other stars carried the burgeoning hopes of a nation before collapsing well before the finish line in an embarrassed heap.

For Slovenia, the Golden Generation is synonymous with just one man. Having gained independence from Yugoslavia in 1991, the republic was a mere infant in football terms throughout the 1990s. Their qualifying campaign for the 1998 World Cup ended with them bottom of their group. For Euro 2000 however, ZZ Top would claim centre stage.

Slovenia scored 12 goals in qualifying for Euro 2000; Zlatko Zahovic scored eight of them. The forward would strike again in the play-off against Ukraine, leading his country to their first major tournament less than a decade after their emergence. In Belgium and the Netherlands, Slovenia would impress, but fell at the group stage. Zahovic scored three of their four goals, assisting the other, and generally raising hell throughout. “Zlatko has put himself on the world stage in this tournament, and I think Slovenia have too,” said head coach Srecko Katanek. Valencia agreed, and paid £5.5m to sign him from Olympiakos that summer. His time in Spain would end after one season, during which he was not allowed to play for his own safety amid protests from fans.

9. Patrik Berger
The year is 1996. There are no YouTube highlight compilations, no expected goals data models, and no extensive Football Manager database. Players from foreign countries are an unknown quantity, each boasting a cultured left foot, long, flowing locks of hair and a technique England could only dream of.

Euro ’96 changed everything. As hosts of the European Championship, the home of the Premier League would witness stars from far afield showcasing their talents. Among the most impressive was the Czech Republic, runners-up to the mighty German machine. Some of the stars of the embryonic country earned more illustrious moves than Patrik Berger’s to Liverpool, but few would become such a cult hero so quickly in their new surroundings.

After playing each of his country’s games in their run to the final, including scoring a penalty in the 2-1 defeat to the Germans at Wembley, Berger would earn a move to Anfield later that summer. Borussia Dortmund had purchased him just a year before, but the winger would move to England for just over £2m due to his impressive performances. He would score twice on his debut, and stay for seven years on Merseyside.

8. Andrey Arshavin
His move to Arsenal may have been completed in the early wintery hours of February 2009, but it was Andrey Arshavin’s heroics at Euro 2008 which laid the groundwork for Arsenal’s interest. The winger was suspended for Russia’s first two games in Poland and Austria, but would return for the final group game to score in a victory over Sweden. In the quarter-finals, his man-of-the-match performance helped dispatch the Netherlands, before they succumbed to eventual winners Spain in the final four. Despite playing just three games, he was named in the Team of the Tournament. Arsene Wenger agreed to pay a club-record £15m to Zenit St Petersburg for his services just months later.

7. Savo Milosevic
For a man who scored 234 goals in 578 career appearances for club and country, ‘Miss-a-lot-evic’ seems a rather harsh and one-eyed nickname. Such was the fate of Savo Milosevic, who is often categorised as one of the worst signings in Premier League history. A record of 29 goals in 90 games at Aston Villa hints at a different side to the story, but the striker’s form at Euro 2000 presented a whole new plot altogether. Helping lead Yugoslavia to the quarter-finals in what would be their last ever tournament as a unified nation, Milosevic scored five goals in four games, finishing joint-top goalscorer with Patrick Kluivert of the Netherlands. Five years after joining Villa for £3.5m, Parma would part with around £16m for Milosevic’s services that summer.

6. Florin Raducioiu
Harry Redknapp may protest at his apparent proclivity towards ‘fahkin wheeler dealing’, but a body of evidence can be built up against the erstwhile manager. Take Boogers, Marco for one. Futre, Paulo is another. Samba, Christoper a third. Raducioiu, Florin is one of the most memorable.

Romania surprised many an onlooker by reaching the quarter-finals of the 1994 World Cup in the United States. Two years later, their quest ended abruptly at Euro 1996. Raducioiu would score their only goal in three group games, convincing Redknapp that he was the answer to all of their ailments – for a club-record £2.4m from Espanyol, no less.

The striker is barely remembered for his two Premier League goals at Upton Park, but for an anecdote from Redknapp, who claims that the player once opted to go shopping with his wife at Harvey Nicholls rather than play a League Cup game. Raducioiu continues to deny the story.

5. Roman Pavlyuchenko
With Luka Modric having already agreed to join in April, Tottenham acted quickly to secure their main transfer target ahead of Euro 2008. Modric shone in the Croatia midfield which reached the quarter-finals. He would not be the only player to impress at the tournament to move to White Hart Lane, however. International teammate Vedran Corluka would soon join him, the defender starring as Croatia conceded just twice in four games.

It would be relative unknown Roman Pavlyuchenko who would truly grab Tottenham’s attention, however. The striker scored just twice in qualifying for the tournament, with his double helping beat England in their penultimate group match. The baby-faced forward would then score three times en-route to the semi-finals, while he was awarded man of the match despite not finding the net against Greece in a Group D game. Pavlyuchenko was named in the Team of the Tournament, and his displays persuaded Tottenham to part with £14m on deadline day. A move for one Andrey Arshavin was not quite so successful – although he would end up in north London eventually.

4. Pavel Nedved
In terms of signing players after their efforts at a major international tournament, Lazio’s decision to purchase Pavel Nedved after Euro ’96 is perhaps the most successful. As aforementioned, Czech Republic teammate Patrik Berger became a cult hero at Liverpool, but not a bonafide world star. Others would earn their moves after reaching the final, but none came close to the post-tournament achievements of Nedved.

Then just 23, Nedved missed only one game – a 1-0 quarter-final victory over Portugal – for the unlikely Czech heroes. An inspired man-of-the-match performance in the semi-final set up a clash with Germany, and although Nedved failed to crown the tournament with one final victory, he had shown his immense potential. His reward was a move to Lazio, who signed him for just over £2m from Sparta Prague. By 2003, he would join Juventus, and later that year he was crowned winner of the Ballon d’Or.

3. Theo Zagorakis
Imagine if Iceland were to win the European Championship this summer. A country placed 35th in the current FIFA rankings, this represents their first ever major international tournament. Their chances of success are almost unfathomable, considering the might of France, the power of Germany and the skill of Spain. For them to lift the trophy come July would be unprecedented.

Except it wouldn’t. In the summer of 2004, the 35th-placed team in the FIFA rankings were Greece. They had reached two previous major international tournaments, failing to win a single game in either the 1980 European Championship or the 1994 World Cup. They scored a solitary goal across both summers. And yet they stood the tallest at Euro 2004, beating Portugal twice, thwarting Spain, and overcoming France and the Czech Republic.

Discarded by Leicester four years prior, Theo Zagorakis would captain the Greeks to history that summer. Named Player of the Tournament, the midfielder played every minute of the successful campaign. Unsurprisingly, a number of members from the Greek squad would earn moves that transfer window. Goalkeeper Antonios Nikopolidis joined Olympiakos. Giourkas Seitaridis moved to Porto. Vassilios Tsiartas headed to the Bundesliga. Released by debt-ridden AEK Athens, Zagorakis found his new home in Serie A with Bologna, becoming, in the words of the club’s owner, their ‘Greek Baggio’.

2. John Jensen
As the famous Highbury chant went: “We’ll be there when Jensen scores.” Those not present in the 32,939 Highbury attendance on New Year’s Eve in 1994 were not there when the Danish midfielder scored his debut goal. It would be his only strike for Arsenal.

Controversy now surrounds Jensen’s move from Brondby to the Premier League in 1992. Then Arsenal manager George Graham was banned from football for 12 months for his dealings with agent Rune Hauge, a representative of Jensen’s. After scoring the opening goal in the Euro 1992 final victory over Germany, Jensen would arguably have secured his big move regardless. The central midfielder moved to Arsenal that summer, and while he would not enjoy the same success, he would become a cult hero in north London. In his penultimate game for the Gunners, Jensen would eventually delight the fans with a curling effort against Queens Park Rangers. It was his first goal in 98 games for the club. He would leave within a year.

1. Karel Poborsky
The dribble. The lob. The insouciance. If ever a single goal acted as the outlier in a man’s footballing career, it is the individual effort from Karel Poborsky in the Euro ’96 quarter-finals. The Czech Republic winger was fortunate in forcing his way through the Portugal defence, but his scooped finish over Vitor Baia lives long in the memory.

It certainly did for Alex Ferguson. The goal capped an impressive summer for Poborsky, and his £3m move to Manchester United was sealed. A year earlier, he had been offered to West Ham for a fraction of the price.

Poborsky’s failure to adapt to life at Old Trafford was not entirely of his own doing. His signing coincided with the emergence of a young David Beckham, with the two in direct competition for a right-wing starting berth. Beckham’s opening salvo was to score from his own half against Wimbledon in the club’s first Premier League fixture of the season. Poborsky was helpless. He would claim a Premier League winner’s medal in his debut season, but would stay only six months more before leaving for Benfica.

Poborsky is the perfect example of the dangers of signing players who impress in major international tournaments. In the words of Ferguson:

“I was always wary of buying players on the back of good tournament performances. I did it at the 1996 European Championship, which prompted me to move for Jordi Cruyff and Karel Poborský. Both had excellent runs in that tournament but I didn’t receive the kind of value their countries did that summer . . . sometimes players get themselves motivated and prepared for World Cups and European Championships and after that there can be a levelling off.”

Didn’t stop you signing Kleberson, did it?