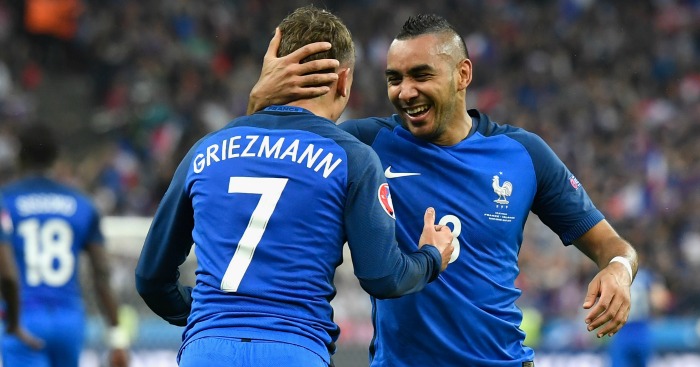 Belgium have gone, Italy have gone, Poland have gone, England went years ago. So who has been the best of those left in?

10) Renato Sanches (Portugal)
We’ll probably never truly know for sure whether Manchester United turned down the chance to sign Sanches or if the player simply preferred Bayern Munich. The only conclusion that matters is that the Bundesliga champions have got a heck of a young player on their hands.

Sanches has actually only started one match for Portugal, when he played all 120 minutes of their quarter-final against Poland. He also smashed his penalty – taking after Cristiano Ronaldo in second – into the top corner. Before then he was forced to impress as a substitute, and impress he did.

In a Portugal midfield with plenty of expensive price tags and touted potential, it is an 18-year-old who has provided the creativity and dynamism that has dragged Portugal through this tournament. Four of his team’s five goals in their last four matches have come with him on the field.

9) Ashley Williams (Wales)
My love for Williams has been boldly stated before, in which I touted him as Britain’s best central defender. That opinion has not changed.

There is a misconception about ‘passion’ in English sport, a mental misspelling of the word as ‘pashun’. We are not asking players to be chest-beating patriots, to run around like headless chickens that are still capable of singing the national anthem loudly. We’d like them to play with an urgency and belief that reflects our own desperation for victory.

Williams is the epitome of this. His celebration against Belgium was an outpouring of such extreme emotion that you wonder how he manages to defend with such assuredness. Now almost 32, the sad thing is that the deserved move to an elite club will probably never arrive.

Until this tournament, Wales fans had a slightly uneasy relationship with Allen. While Bale and Ramsey, the country’s other two big-team players, had led their side to France, Allen was on the fringes of the success. He’s stepped up when it mattered.

Neil Taylor describes Allen as “the player who makes Wales tick”, but it is Gareth Bale’s assessment that most resonates, given the cliched comparison with the game’s greats: “He’s Joe Allen. And he’s been amazing in this tournament for us.”

7) Manuel Neuer (Germany)
The obvious retort when praising Neuer’s form for Germany is that he doesn’t have an awful lot to do, and the same argument is valid here. Nineteen goalkeepers have made more saves at this tournament than Germany’s No. 1.

However, that’s far too simplistic. Firstly, the only goal Neuer has conceded was from a penalty against Italy, and he then saved spot-kicks from Leonardo Bonucci and Matteo Darmian in the shootout. It was he rather than Gianluigi Buffon who was the hero.

Secondly, it is Neuer’s presence that is so imposing. He claims crosses, thwarts danger and passes the ball out with unerring accuracy, whether kicking it short or long. This tournament has cemented his place as the world’s best goalkeeper.

6) Pepe (Portugal)
Pepe is not just a sh*thouse. He is the king of all the sh*thouses (sh*thouses? sh*thousi? sh*thomes?). He is a sh*house big enough for Sergio Ramos, Diego Costa and Marouane Fellaini to host a sh*thouse convention in. He is the big boss on the final level of Sh*thouses 2: The Odyssey Continues.

In fact, so prominent is Pepe’s d*ckbaggery that it casts a shadow over every other aspect of his game. It’s very easy to overlook the fact that, when not playing the douche, he’s actually a very good defender.

Portugal’s opening game against Iceland saw a glorious example of Pepe’s kn*bbishness, but since then he’s calmed down that element of his game to magnificent effect. Pepe was tarred by the same brush as every other defender during the Hungary game, but has been otherwise supreme. He’s bound to let me down in the semi-final.

5) Jerome Boateng (Germany)
The one that got away from Manchester City. What Pep Guardiola wouldn’t give to arrive in Manchester to find the fourth best central defender in world football (Giorgio Chiellini, Diego Godin, Leonardo Bonucci).

Boateng was not a piping hot mess at City, but has improved immeasurably during his time back in Germany after failing to break into the first team under Roberto Mancini. His handball against Italy was stupid, but until then he had arguably been Germany’s best player.

Paolo Maldini’s adage about tackling rings true with Boateng. Such is his positioning and pace, he has only attempted five tackles in five matches at Euro 2016, winning four of them. In Germany’s squad, he ranks first for shots blocked, first for clearances, second for interceptions, second for completed passes and has not been dispossessed during the entire tournament. Get you a man who can do both.

4) Aaron Ramsey (Wales)
There are certain rules that almost nobody can defend, but top of that list are the regulations surrounding tournament suspensions. Banning players for two yellow cards in five tournament matches is outrageously unfair. It creates an enormous pressure not just on players themselves – particularly those in central midfield and at full-back – but also referees.

For Ramsey to miss the biggest game of his life for the two offences he committed is crazy. The maths might work (five bookings in 38 games vs two in five at a tournament), but that fails to represent the heightened atmosphere at such tournaments and the comparatively short length of the competition. It is a bloody shame.

As Sarah Winterburn wrote here, Ramsey has benefitted from an enhanced freedom that he doesn’t get at club level. Gareth Bale attracts the spotlight while Joes Allen and Ledley give him the cover to go forth and multiply. No player in the tournament has more assists.

3) Antoine Griezmann (France)
It was the overdue move that might just decide this tournament. With France trailing against Ireland at half-time, Didier Deschamps moved Griezmann to a central position, and he promptly scored two second-half goals. Starting from the same position against Iceland, with Moussa Sissoko on the right, Griezmann scored one and assisted two. He is the current leader in the Euro 2016 Golden Boot race.

Deschamps was given credit for his tactical masterclass, but the valid question is why Griezmann wasn’t always in the centre given his wonderful season for Atletico Madrid in that role and Olivier Giroud was so obviously in need of support. You can’t credit for unblocking the toilet when it was your overeating that caused the blockage in the first place.

2) Toni Kroos (Germany)
Pass, pass, pass, pass, pass. Pass when you wake in the morning. Pass in your lunch hour. Pass on the bus on the way home from work. Pass for 20 minutes before going to sleep at night.

Toni Kroos has completed 522 passes in his five matches so far. That’s not attempted but completed, although where Kroos is concerned they are almost the same thing. The gap between him and second place on that list is bigger than the gap between second and 27th. Pass, pass, pass, pass.

Kroos has taken 13 shots in this tournament, of which only three have been on target. He’s been dribbled past 16 times, which is the second most in the tournament. But none of that matters when you can pass like a sexy metronome.

1) Dimitri Payet (France)
There is a tendency to crown someone as Player of the Tournament after the first week. In the case of Euro 2016, that man was Dimitri Payet. The West Ham playmaker was majestic on the opening night of the competition, and then scored a wonderful second goal as France beat Albania. Since then he has tailed off a touch, but still has the chance to lead his country to glory.

Rested for France’s third game and ineffective against Ireland, Payet saved his magic for two moments in the early stages of the tournament. “If someone had told me that it was going to be like that tonight I don’t think I would have believed it,” he said after the Romania game. You’d think he’d have got used to being brilliant by now.