Home Arsenal Top ten: Players who have nine days to secure a move 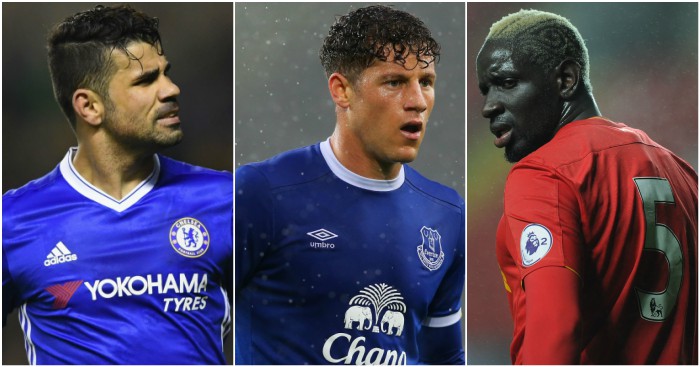 10) Loic Remy (Chelsea)
‘Still at Chelsea’ is the answer to the question most of you are asking yourselves right about now. You would also be forgiven for forgetting that the France striker spent last season on loan at Palace, where injuries restricted him to a single, solitary start in the Premier League. That came after only three Premier League starts the year before.

The 30-year-old has a year remaining on a lucrative Chelsea contract, and this time next year he could have many more options as a free agent. That is providing clubs remember who he is, because another season of inactivity will see him entirely erased from people’s memories. Another loan move would make sense, unless Chelsea find a patsy willing to pay an agreeable fee for the former Newcastle and QPR centre-forward.

9) Robert Snodgrass (West Ham)
Eight months on from joining West Ham for around £10.2million, Snodgrass has been told he can leave. Permanent deal or a loan, it doesn’t matter to the Hammers, they just want rid of him and his wages off their books.

The winger has depreciated around £1million a month since he moved south, but the offers don’t appear to be flooding in. Sunderland are interested but Snodgrass, who turns 30 a week after the window closes, will probably fancy one last crack at the Premier League. Not even a year ago, the Scotland international scored seven goals in 19 to- flight games for a rank bad Hull side. Brighton and Newcastle have been linked and Snodgrass would surely be an asset to either of the newly promoted sides.

8) Alex Oxlade-Chamberlain (Arsenal)
Arsene Wenger says he wants Oxlade-Chamberlain “to stay here for a long time” but the England international appears to need some convincing. Oxlade-Chamberlain’s progress has stalled at the Emirates, due to injuries and his versatility, which has seen him become a jack of all trades but master of none.

The 23-year-old says his preferred position is central midfield, but Wenger rarely trusts him in such a role unless he has little or another option. Chelsea are the club most heavily linked with Oxlade-Chamberlain, but it is unlikely he would have much more joy in the middle at Stamford Bridge. The Arsenal boss said earlier this year that “in the future I see him being a successful central midfielder,” but a fresh challenge may be required before that day arrives. Especially since the former Saint is less than a year from free agency.

7) Lazar Markovic (Liverpool)
The Serbia winger failed to make Liverpool’s bench at Watford last week by some distance, with Jurgen Klopp having told the £20million flop he is free to go. But the Reds will have to lower their asking price of £16million for a player who has spent the last two seasons on loan in three different countries, scoring five goals in 32 league appearances at Fenerbahce, Sporting Lisbon and Hull.

Another temporary switch serves Liverpool no purpose other than getting him out from under their feet, but absolutely no one would be surprised to see him loaned out on deadline day, perhaps to Newcastle, who fancied him last summer and are having to do it this year on the cheap.

6) Fabian Delph (Manchester City)
Manchester City want to sell the midfielder, but he only wants to go on loan. Perhaps Delph should be applauded for clinging on to the belief that he can salvage his City career, but the former England international should really take the hint.

That said, Delph has hardly been presented with a range of exciting offers. Stoke’s patience appears to have run thin after they were kept hanging on at the start of last month, but it would not be a surprise to see them rekindle their interest in the coming week. The Potters weren’t prepared to match City’s £14million valuation back then and given there’s hardly a bidding war going on, their proposal for a permanent deal is unlikely to be any more appealing to City. A season-long loan appears most likely, but Delph would be wise to forget whatever ideas he may have of forcing his way back into Guardiola’s thinking.

5) Calum Chambers (Arsenal)
Despite Arsenal’s need for three centre-halves in their new system, Chambers failed to make the bench last week, even with Laurent Koscielny, Gabriel, Shkodran Mustafi and Per Mertesacker all absent.

Chambers went to Middlesbrough last term hoping to show what he can do when given regular game time but the 22-year-old returned to the Emirates further away from Wenger’s XI than ever. If Gabriel is sold back to Spain, then the manager would reportedly be keen to keep the former Southampton youngster as cover, but a season spent anywhere but on the pitch would be even more detrimental. Crystal Palace were reportedly interested until talks broke down over money, which is a recurring theme with the well-paid deadwood Arsenal are trying to shift.

4) Ross Barkley (Everton)
This summer really hasn’t gone according to whatever plan Barkley and his agent concocted. Neither Chelsea nor Tottenham are willing to stump up the fee being demanded by Everton, while Spurs are also put off by his wage demands. Of course they are.

Throw a torn hamstring into the mix, and it’s a recipe for uncertainty. But the injury is understood not to have put the two London clubs off as much as the financial outlay, with both sides able to look beyond the three months the England midfielder is set to miss. Either Spurs or Chelsea would be a step up in status and salary for Barkley and if he is as determined to quit Everton as it would appear, then it would be fair to question the 23-year-old’s priorities if he wasn’t willing to compromise for the sake of a few quid.

3) Mamadou Sakho (Liverpool)
Klopp maintains that he will not spend silly money on a centre-half just for the sake of spending, with the apparent lack of alternatives to Virgil van Dijk threatening to leave Liverpool short. But the manager’s stubbornness also extends to Sakho, who remains out of the picture at Anfield despite being just the type of player, if not the character, Klopp needs.

Again, Liverpool are not willing to sell cheaply – just because they don’t value his presence doesn’t mean another club wouldn’t. But asking £30million for an outcast is only prolonging the problem for Sakho and Liverpool. It would appear to make sense for the Reds to send Sakho to Southampton in part-exchange for Virgil van Dijk but that would involve an embarrassing climb-down on the Saints’ part. Still, not many would bet against such a deal in the last days or hours of the window. Speaking of Van Dijk…

2) Virgil van Dijk (Southampton)
The Dutch centre-half has gone all out for a move, and had Liverpool not so spectacularly screwed up their approach, he would almost certainly have got the one he wanted weeks ago. But Southampton seem insistent on not dealing with the Reds, which is a perfectly reasonable stance. But that leaves Van Dijk in a tough spot.

But all is not yet lost for the 26-year-old. If the Saints hold out for as long as possible before getting the maximum price from Liverpool, they may feel their point has been made, especially since the alternative is that they are left with an unhappy player. Chelsea could yet have a say, and why Man City aren’t sniffing around, given the money they have been willing to spend on other recruits, is baffling. Where Van Dijk will be come September 1 remains far from clear but it seems obvious that the saga has some way to go before it reaches its conclusion.

1) Diego Costa (Chelsea)
Costa’s protest in Brazil cannot feasibly last until Christmas so, one way or another, everyone concerned needs to find a resolution to the current stand-off. Chelsea want rid of Costa; Costa wants to go to Atletico; Atletico can’t afford the fee being demanded by Chelsea; and so it goes on.

Even if Atletico and Chelsea find some common ground, which appears a long way off, then Costa could not be registered with the La Liga club until January owing to their transfer ban. But the 26-year-old wants clarity over his future and even he admits his extended break is getting tiresome. The only logical solution for everyone is for Atletico and Chelsea to meet somewhere in the middle so that Costa can get back to his scoring goals and boiling p*ss.