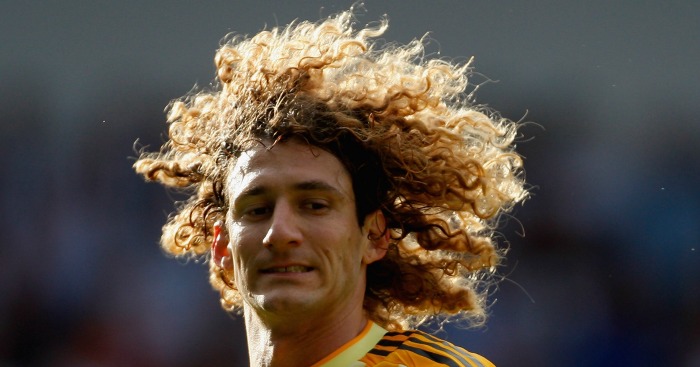 10) Tom Huddlestone
The summer of 2013 is a difficult one to relive for Tottenham fans. Roberto Soldado and Paulinho both arrived, the club had been left with some random youth product called Harry Kane as their third senior striker, and the best player seen at White Hart Lane for many a year finally departed after years of providing goals, memories and excitement. Gareth Bale? No. Professional kick-ball-hard-man Tom Huddlestone.

It cost Hull City just £5.25million to sign the midfielder. Huddlestone played all but two games of the 2013/14 season, assisting Steve Bruce’s Tigers in their quest to stave off Premier League relegation in their first season back from the Championship. But they would fare far worse in their second campaign, suffering the drop last season. While Liam Rosenior, Maynor Figueroa and James Chester could not suffer the ignominy of ensuring Aston Villa maintained their Premier League status for one more season, Huddlestone was one of the contingent who stayed at the KC Stadium. The midfielder’s contract expires in the summer; Tom Huddlestone, West Brom midfielder has a certain ring to it.

9) Charlie Austin
Slim pickings. That is the only possible way to describe QPR’s doomed squad upon relegation last season. Rob Green, Clint Hill and Karl Henry put up no opposition upon their return to the safe haven and familiar surroundings of second-tier football. Joey Barton was busy being a buffoon. Remnants of Redknapp lingered in Richard Dunne, Sandro and, of course, Niko Kranjcar. But among the rubble was a rare diamond. From Manchester United to Tottenham to West Brom to Newcastle, Charlie Austin was linked with the majority of Premier League clubs in the off-season. QPR scored 43 goals last season; Austin scored or assisted 23 of them. This was a man in demand. With the 26-year-old’s contract at Loftus Road set to expire the following summer, Austin contradicted each and every transfer rumour from May until September, and remained with the London club, before departing for Southampton in January.

“I just get on with my job. When the manager calls me along to play in a position, I will do it. I always give 100%.”

Emmerson Boyce’s words, spoken in the predictable midst of a Wigan relegation battle in March 2008, concern his playing position. The Barbadan fulfilled the role of right-back, left-back, central defender, right winger and even striker during his time at the DW Stadium. But it also extends to his club’s league standing. Boyce joined Wigan in 2006, with Paul Jewell looking to strengthen his defence in Wigan’s second season in the Premier League. Chris Hutchings, Steve Bruce and Roberto Martinez all passed through, but Boyce remained. He holds the record for most Wigan appearances in the Premier League, with 194. He captained the Latics to their first-ever FA Cup final victory in 2013 over Manchester City, and months later played for them in the Championship, one of few who remained with the club through relegation. Boyce was an ever-present in their first season in the Championship, before playing just 20 games last season. His reward for his loyalty? A move to Blackpool. Poor bugger.

7) Nwankwo Kanu
But loyalty is not the only reason for players not to leave relegated clubs. The man responsible for one of the most memorable moments in Portsmouth history almost caused the complete and total collapse of the very same football club. Nwankwo Kanu, the scorer of the winning goal in the 2008 FA Cup final, almost forced the club into liquidation four years later when demanding the club’s £3million debt to him in wages be repaid. After relegation from the Premier League in 2010, Portsmouth started the following season with just 12 senior outfield players in the Championship, a figure which included the Nigerian striker and his seven goals in his last 65 league games. Kanu scored three goals across two seasons and 40 games in the second tier, before leaving in the summer of 2012. The former Arsenal forward eventually dropped his claim against the club, writing off the unpaid debt, with Pompey escaping liquidation as a result. In unrelated but hilarious news, Kanu maintains that he is 39 years old.

6) Scott E. Parker
For a man who has suffered three separate relegations from the Premier League, Scott Parker is as durable as one would expect Scott Parker to be. Charlton dropped to the second tier in one of his first years of professional football in 1999. West Ham then suffered relegation in 2011 despite the best efforts of that season’s Player of the Year. Fulham are now captained by the 35-year-old after they became victims of the drop two years ago. For 15 consecutive seasons Parker was a Premier League mainstay, but the midfielder elected to hand his ‘consummate professional’ title to James Milner before journeying the Football League with the Cottagers. The former England international could surely have ‘done a job’ for a lower mid-table Premier League side, but instead Parker has played 50 games in the Championship over the past two seasons.

5) Gary Kelly
The only one-club man on this list, Kelly is also the only player to have witnessed the disintegration of a side but still refuse to leave. From the 1993/94 season to the doomed 2003/04 campaign, Kelly was Leeds’ right back. Injuries, Danny Mills and arguments with Dennis Wise and Ken Bates aside, he was a first-team regular. Under the stewardships of Howard Wilkinson and Gordon Strachan, to the spell with David O’Leary as Premier League leaders and Champions League semi-finalists, to the subsequent destruction of the side under Terry Venables, Peter Reid, Kevin Blackwell and Dennis Wise, Kelly was a comforting presence on Leeds’ rollercoaster ride from the highest heights to the lowest lows.

‘Financial difficulties’ does not quite do the issues at Elland Road over a decade ago any justice, but relegation to the Championship in 2004 heralded an evacuation of the Leeds playing staff. Paul Robinson, James Milner, Ian Harte, Scott Carson, Mark Viduka and Alan Smith all left for greener pastures, with Messrs Kewell, Woodgate, Bowyer and Keane having already departed. But Kelly, along with Lucas Radebe and Eirik Bakke, remained unmoved. Where the latter two rarely featured for the club in the second tier due to age and injuries, Kelly continued in his role at right-back, the loyal servant through adversity.

4) Fabricio Coloccini
Numerous Newcastle players remained at St James’ Park even after the side’s surprise relegation from the Premier League seven years ago, but Coloccini’s current role as club captain sets him apart. Joe Kinnear dubbed the Argentinean “Mr Reliable” in December 2008. Five months later, the club was relegated. Coloccini had joined the club from Deportivo La Coruna the previous summer for £10million, but was playing in the Championship in his second season. Despite the wishes of the fans, the 34-year-old remains a first-team regular, and was appointed captain in response to his pleas to leave last summer. “That was like watching Bobby Moore. It was that good,” Alan Pardew once said of the centre-half. Newcastle had just drawn 1-1 against Sunderland.

3) Mark Noble
Bread and butter. Salt and pepper. Mark Noble and West Ham. The best things come in pairs, and the relationship between the midfielder and the Hammers is downright beautiful. The England non-international broke into the first team while West Ham were still residing in the Championship in 2005. The club earned promotion that year, and remained in the Premier League until their relegation without even a whimper in the 2010/11 season. Still only 23 by that point, and with that England call-up lost in the post/eaten by the dog/justified by the fact he isn’t quite good enough, Noble would surely have attracted interest from other sides. But you can’t take the boy out of Canning Town, and the club captain is now their longest-serving player by exactly two years. Unlucky, James Tomkins.

2) Michael Carrick
Jermain Defoe. Paolo Di Canio. Joe Cole. Glen Johnson. Lee Bowyer. Freddie Kanoute. Michael Carrick. West Ham’s squad upon their Premier League relegation in 2003 was one which married youth and experience, which combined skill and steel, and which boasted the legendary workings of Titi Camara. But the club would shed much of their talent on their journey to the second tier.

Then only 21, the midfielder had not yet entered his Marmite phase. The Hammers’ youth product was an undoubted prospect, already a fully-fledged England international, and a first-team regular at Upton Park. Carrick was not short of suitors, but the best/worst midfielder to have ever lived was willing to spend one year in the First Division before departing the following summer.

“I cannot hide that, after five years here, I was tempted by a new experience. This club has helped me to win and if I have become world champion, it is thanks to Juve. I can cope with a year in the second division and I will look to do something new and win the Serie B title.”

Gianluigi Buffon’s words, spoken in summer 2006, were hardly resounding in their nature. But the sentiment behind it was admirable. Juventus had been embroiled in the Calciopoli scandal, with the club implicated in the match-fixing which had threatened to tear the Italian league apart. Demoted to Serie B, with two of their Serie A titles rescinded, attention turned to which players would stay aboard a potentially sinking ship. Buffon, at 28, was – and remains – one of the world’s finest goalkeepers. World Cup glory with Italy was imminent, and rumours on Buffon’s future were plentiful; both Milan clubs and Arsenal were interested.

The keeper, along with club captain Alessandro Del Piero, stayed in order to help the club recover. Where Fabio Cannavaro, Lilian Thuram, Patrick Vieira, Zlatan Ibrahimovic and manager Fabio Capello could not bear even a season in Italy’s second tier, Buffon and Del Piero ensured their status as club legends by committing themselves to the cause. “A true gentleman never leaves his lady,” Del Piero said during the scandal which almost engulfed his club. Lovely.