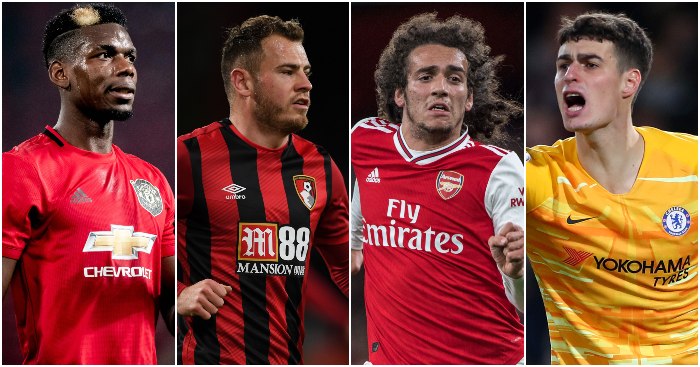 10) Jamaal Lascelles
The Newcastle captain was seen as a potential England defender last season but ahead of Euro 2020, Lascelles is no longer even part of the conversation, despite the struggles Gareth Southgate is having in finding a partner for Harry Maguire.

A knee injury has played a part this season, with Lascelles sidelined for two months prior to returning in January. But the stats suggest the 25-year-old is making fewer tackles, blocks, clearances and headed clearances per 90 minutes than last season.

Darren Bent reckons that Lascelles ‘needs to have a look at himself’ having not yet earned an England cap. That seems a little harsh, but there is little doubt that his standards have slipped.

9) Felipe Anderson
West Ham’s record signing is enduring that difficult second season, though he’s hardly the only West Ham player to struggle to perform to their potential.

Anderson chucked in 10 goals and five assists during his maiden season in England last term, and while he has matched that rate of creativity, he has scored only once. Since the end of September, all he has offered in the Premier League is a single goal and single assist.

More worryingly, Anderson has been pulled up on his perceived lack of effort. Carlton Cole called out the Brazilian last week: “Felipe Anderson for me is a great player but he’s just not pulling his weight about, at the moment. I don’t like to batter my colleagues as footballers, but he should be doing a lot more.”

Anderson was the bench on Saturday while Pablo Fornals put in a shift on the left, creating two goals as Moyes was rewarded for an uncharacteristically positive selection.

8) Gylfi Sigurdsson
The Iceland playmaker is currently playing for his Everton career, with Carlo Ancelotti using the remainder of the season to suss out who he wants to keep around. Sitting down on the job against Manchester United on Sunday probably won’t have helped his cause.

Sigurdsson’s numbers offer a succinct summary of his struggles. Last season, he had a hand in 19 goals, scoring 13 while laying on 6. During the current campaign, the 30-year-old has weighed in with just one goal and two assists in the Premier League. He hasn’t scored since October despite retaining his place in the XIs of Marco Silva, Duncan Ferguson and Carlo Ancelotti.

He has, though, been shifted around the side more than he might prefer. Ancelotti has deployed Sigurdsson off the left flank in recent weeks while the 30-year-old has also sometimes played a little deeper in central midfield. But the former Swansea star will need to show that he can perform in roles more than the ‘cheat position’ as a no.10.

7) Matteo Guendouzi
It is hard to identify any particular Arsenal player as having regressed since most are only meeting the low expectations we already held. But Guendouzi’s development certainly seems to have tailed off.

Perhaps he is a victim of his own impressive form as a Premier League newbie last term. Few expected the then-teenager to come in from Lorient and have the impact he did under Unai Emery last season. At various stages of his maiden season, he was the Gunners’ most impressive performer, if only because it seemed that he cared enough to run about a bit.

But Guendouzi appears to have taken his eye off the ball during his second campaign – he has not started a Premier League win for five months. Too often he is fighting running battles with opponents, officials and seemingly himself, while Mikel Arteta has reportedly had to warn him about his conduct after the recent winter break. Guendouzi will doubtless develop into a fine midfielder, but it would appear some re-focus is required if he is to maintain the progress he made last year.

6) Paul Pogba
We’re not sure how much Pogba’s form has regressed because he’s barely played. When he did, he looked like he was doing United a favour. Perhaps his inactivity is a clever plot to lower his value, which was certainly hindering his hopes of getting away from the club. If so, it seems to have worked.

But it’s a dangerous ploy because Pogba would still not come cheap and where is the evidence to suggest that he would be worth even half the figure United apparently wanted last summer? The France star doesn’t need much help casting himself in a poor light at Old Trafford but Bruno Fernandes has certainly lent a hand with his performances in his first month as a United player.

A year ago, Pogba was seen by many as a victim of Manchester United’s regression. Nowadays, more people are tuned into the fact that he is one of the causes. He has a couple of months to get fit and finally show what he can do, if only to preserve his France place and prove to Real Madrid or Juventus that he is still worth the hassle.

5) Juan Foyth
The Argentina defender was preparing for the season as Mauricio Pochettino’s pet project, an answer to Tottenham’s right-back problems. Now, Foyth finds himself firmly out of the picture at White Hart Lane under Jose Mourinho.

The 22-year-old has injury to thank for never taking the chance to make the full-back position his own but that opportunity came as a result not only of Spurs’ shortage in that area, but also Foyth’s own inability to cement a place in the centre. Pochettino felt he could eventually develop into a central defender; Mourinho isn’t prepared to sit around and wait.

Mourinho gave Foyth the chance to show what he could do and he was hooked at half-time at Norwich amid the manager’s complaints over ‘defensive mistakes’. It was a surprise that he wasn’t loaned out in January, which will surely happen come the summer.

4) Oriol Romeu
The former Barcelona midfielder might suggest it is a coincidence but Southampton’s form has certainly improved after Ralph Hasenhuttl dropped him from his XI.

Romeu, a favourite of Mark Hughes and once linked with a return to Barca, started all Saints’ opening 12 matches but after six defeats in seven, one of them being the 9-0 humping by Leicester, Hasenhuttl dropped the 28-year-old to the bench, where he has remained for the most part since November.

As The Guardian has pointed out, with Romeu in the side, Saints have two wins from 13 matches, a win rate of just 15.4 per cent. Without Romeu, eight wins in 15 games takes the win rate up to 53.3 per cent.

3) Wilfried Zaha
Zaha, like a few other players on this list, has clearly had other things on his mind this season. He certainly did at the end of the summer when he failed to secure the big move he so desperately craved and it seems he has yet to shake himself from that funk.

To look at Palace’s position in the table and what they are achieving this season while seeing that success as being in spite of Zaha would have seemed ludicrous before the start of the season. But Roy Hodgson’s side is built entirely on a solid foundation. Only Newcastle have scored fewer goals this season, and when Palace have needed someone to produce in attack, more often than not, it has been Jordan Ayew who has stepped up.

His form – only three outfield players have lost possession more often this season – is doing Zaha no favours when it comes to that move he has been chasing. He has been involved in eight goals (three scored, five assisted) in an ever-present 28-game Premier League campaign, compared to 20 goals in 34 matches last season. If the likes of Chelsea, Arsenal and Tottenham were reluctant to meet Palace’s valuation last summer, it seems unlikely they’ll be feeling any less thrifty in 2020, especially when Zaha will be approaching his 28th birthday when next season kicks off.

2) Kepa Arrizabalaga
The world’s most expensive keeper cannot say he wasn’t warned. Frank Lampard told Kepa on a number of occasions prior to the New Year to up his game, but the Chelsea manager’s patience snapped before the trip to Leicester. Despite saying that it was a game-specific selection, the fact Lampard has stuck with 72-year-old Willy Caballero for the games since tells you all you need to know about Kepa’s standing in the manager’s mind.

Kepa, apparently, reckons he hasn’t been supported by his club or manager but he can’t argue with the facts or stats. The Spain stopper has the worst saves percentage record of any keeper in the Premier League, with only Angus Gunn, he who was dropped after conceding nine to Leicester, performing worse overall.

More than just a blip in form, it seems clear that Lampard just doesn’t trust Chelsea’s record signing. Now he needs to convince the board to take a big hit on Kepa this summer before he is allowed to buy his own.

1) Ryan Fraser
The Bournemouth winger was comfortably the Premier League’s most creative force last season. Fraser laid on 28 big chances for his team-mates last term, 10 ahead of second-place Eden Hazard, who earned himself a move to Real Madrid.

That is clear. So far this season, he has laid on five big chances – 43 players have created more. It is unlikely he will be short of offers as a free agent but Fraser will have to prove that this season was the exception to the rule.