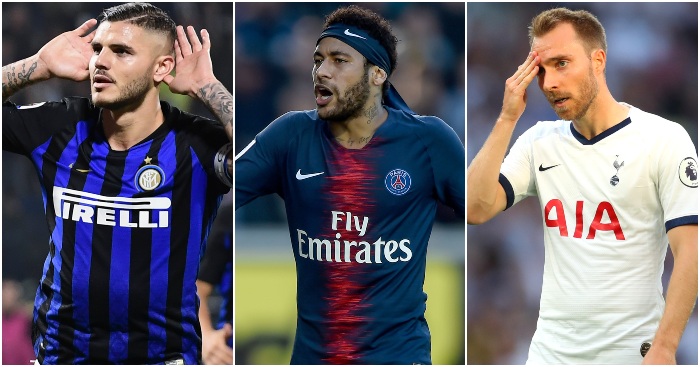 Just because he didn’t go to United or Spurs doesn’t mean Fernandes won’t move. The noise around the Portugal midfielder has quietened somewhat – okay, it’s been silenced – since the Premier League window closed but Fernandes has put aside his disappointment and set about putting himself back in the shop window.

While United were chucking their sh*t at the Palace wall this weekend, Fernandes laid on all three of Sporting Lisbon’s goals in a 3-1 win over Portimonense. Sporting were certainly keen to do business for the right price this summer, and with Napoli and Atletico among the clubs being linked with creative players, perhaps we shouldn’t rule out a late twist to this infernal story

9) James Rodriguez
The Colombia attacker was a dead cert to be on the move this summer, even if Bayern Munich opted not to keep the player they have borrowed for the last two seasons. Given Real’s need to raise funds for their squad overhaul and given James has been exiled for a couple of years, his sale seemed inevitable.

But ‘Operation 200’ has been a dismal failure. Of the five players they hoped might raise enough money to buy Paul Pogba, only Dani Ceballos has departed and that was on loan. Instead, Rodriguez and Gareth Bale were both brought back in from the cold to start for Real at the weekend.

Real are faced with ending the window with egg on their faces – a prospect that Florentino Perez will go to great lengths this week to avoid. But they will have to sell or swap to buy, and Rodriguez is one of the few players who attracted interest. Atletico and Napoli, again, were both keen while PSG are said to be interested as part of a Neymar deal, as long he brings a load of mates and a truck-load of cash, too.

8) Marcos Rojo
Ideally, Dejan Lovren would prefer to move on this summer since his place in the Liverpool pecking order became clear. Should everyone be fit, the Croatia defender won’t even make the bench. AC Milan, Roma and Bayer Leverkusen have all made offers to give Lovren more game time but while he remains Liverpool’s fourth centre-back, it seems unlikely that he will be allowed to leave.

That’s not quite the case for Rojo. The Manchester United defender is perhaps sixth or seventh in the pecking order at Old Trafford and maybe third when it comes to the left-back spot. United would be quite willing to let the Argentina defender leave but attracting an offer worth their while is proving to be harder than perhaps they imagined.

Which makes the decision to give Rojo and new £130,000-a-week contract last year all the more baffling. He couldn’t be trusted to stay fit and when he was available, his defensive brain was no more trustworthy than his flimsy legs. Little has changed there but his new deal makes Rojo a lot harder to shift. He could stick around but United would be wise to accept one of the loan offers that is sure to come their way this week.

7) Mario Lemina
“There is a risk, of course” admitted Lemina after he went public a month before the Premier League deadline to say that there was “no turning back” for him at Southampton. He wanted out and Saints were happy to oblige, banning him from the first-team dressing room.

That risk increased considerably when the window shut on these shores. Despite being linked with Manchester United, Arsenal, Wolves and Leicester, no offer was forthcoming, leaving the former Juventus midfielder to hope that a club from the continent might spare him from being stranded at St Mary’s.

Fortunately for Lemina, it seems there are teams willing to make him an offer. Monaco were thought to have agreed terms until Southampton changed them, inserting an obligation to buy at the end of a season-long loan deal. Roma are also interested along with Celta Vigo and Lyon, which offers Lemina the choice of three leagues. Celta Vigo are the only club to be able to offer the 25-year-old a taste of a new country.

6) Paulo Dybala
The suspicion remains that Dybala was being dragged reluctantly to market by Juventus rather than going willingly. Manchester United were never convinced by his desire to move to England, and his demands were too rigid for Tottenham to accommodate on deadline day.

To be honest, we expected Dybala to be a PSG player by now. With Neymar on his way, the Argentina star would have maintained the superstar quota at the Parc des Princes but neither side has taken the initiative. “There are no immediate trips to Paris planned,” said his agent while also denying that his move to Spurs broke down because of their demands.

Juventus remain open to offers for Dybala but it is looking less likely both the club and the player will receive a proposal that suits them both. Juve would prefer to recruit another attacker, in which case, they will have to try harder to find a buyer for Dybala.

5) Mauro Icardi
Inter have taken their sweet time over most of their transfer business this summer. Ideally, Icardi would have been out of the door weeks ago, but still the Nerazzurri are dealing with his and Wanda’s sh*t.

Icardi’s wife and agent claimed this weekend that the Argentina star “has received offers that no player would turn down, but Mauro has said no for Inter”. She also described Antonio Conte as “one of the best coaches in the world”, though the admiration certainly doesn’t appear to be mutual.

Conte has reportedly told Icardi that he does not feature in his plans, and the recruitment of Lukaku and possibly Alexis Sanchez emphasises that the club is done with their former skipper. Juventus and Napoli have been linked with a late move for the 26-year-old, while interest from Roma has faded and Monaco doesn’t interest the striker.

4) Shkodran Mustafi
Arsenal badly needed central defensive reinforcements even before Laurent Koscielny threw a wobbly. David Luiz came in on deadline day to replace the Bordeaux-bound Frenchman but Arsenal could still be caught short. Regardless, even though Unai Emery ideally couldn’t afford to lose another centre-back, he can’t really chance his arm with Mustafi.

Emery tried to be nice about it last week but the message to Mustafi was clear: do one. If the German wasn’t happy with his level of involvement last season, he certainly won’t feel any more positive about how little Emery will trust him this term.

Mustafi’s problem, unlike Nacho Monreal and Mohamed Elneny, is that few clubs are coming forward with a better offer. Especially not if Arsenal are demanding £25million for the 27-year-old. It seems like all parties may have to lower the sights in the coming days.

3) Alexis Sanchez
Perhaps with a lack of progress in the talks with Inter at the back of his mind, Ole Gunnar Solkskjaer tried on Saturday to make it sound like Sanchez could have a future at Manchester United. But the time has come to stop flogging this particular dead horse and instead pay for it to be packed off to Milan.

Sanchez is not suddenly going to reverse 18 months of baffling wretchedness just because United don’t want to get rid for the money currently on offer. If the Chilean stays beyond next week, he’ll continue to lurk around Carrington as the symbol of United’s mismanagement, sucking the life out of everyone. He is going to cost United either way – they may as well pay for him to get out of their hair.

Fortunately, it seems like Inter have come back to the table after initially walking away. Ed Woodward has evened the score somewhat with the Italians after the Ivan Perisic debacle by getting his money back for Romelu Lukaku. He won’t do that with Sanchez, but Inter are likely to offer him an opportunity to draw a line under one of his worst pieces of transfer business.

The world’s most expensive player has all-but burned his bridges in Paris and though his exit may be ahead of the Ligue Un champions’ schedule, they are certainly determined to make the best of a bad situation. And so they should. Who isn’t enjoying watching Real and Barca have their balls squeezed?

Neither club has the cash to buy Neymar outright so all they can do is throw their cast-offs at PSG in the hope they will eventually bite. Barca have had four offers rejected, the latest involving Ousmane Dembele, the £135million forward bought as a replacement for Neymar in 2017. PSG recognise that keeping Neymar is not a sustainable solution, but they will hold on for as long as possible to wring as much as possible out of Barca or Real.

1) Christian Eriksen
As Seb suggested from White Hart Lane on Sunday, Tottenham have to make a decision over their playmaker. Either he’s sold and goes, or he stays and starts. All the while Spurs remain in limbo, with Eriksen on the bench, Pochettino’s side are suffering.

Eriksen’s preference at this stage may be to sit tight and wait for next summer, when he can walk away from Spurs and choose his next club. But Daniel Levy would be aghast at the prospect of losing a player valued earlier this summer at £60million for nothing next July. Even if it means only pulling in £30million, you can bet Levy would prefer a sale now.

But where? Eriksen has only ever felt like a last resort for Real Madrid while they chase other players they can’t afford. Atletico may fancy snapping up a bargain, otherwise Eriksen and Spurs’ intentions as the deadline closes are likely to conflict with one another.