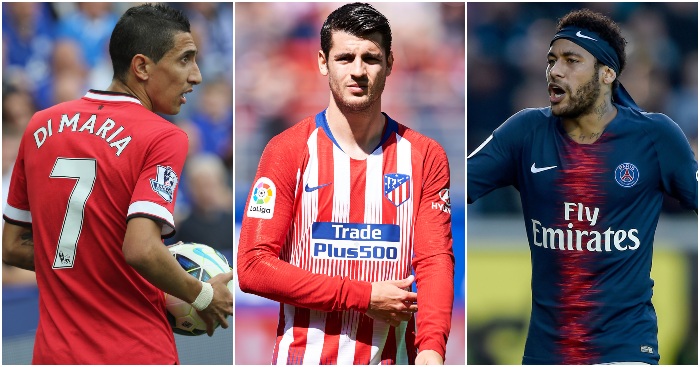 Romelu Lukaku, James Rodriguez and Gonzalo Higuain are all sat waiting to burst into the top ten…

10) Eden Hazard – £121m
Lille – £32m – Chelsea – £89m – Real Madrid
Hazard’s figure is the minimum total amount two clubs have shelled out for the Belgian. Chelsea could be due a further £60million from Real depending on which add-ons the attacker satisfies.

9) Antoine Griezmann – £131.6m
Real Sociedad – £24m – Atletico Madrid – £107.6m – Barcelona
Atletico secured an £83.6million profit on Griezmann when Barcelona coughed up to activate the release clause in his contract – but still they want more. They reckon they are owed another £71million, while Real Sociedad are watching on closely since they are due 20% of whatever Atletico receive for the France star.

8) Angel Di Maria – £131.8m
Rosario Central – £6.8m – Benfica – £21m – Real Madrid – £59.7m – Manchester United – £44.3m – PSG
Has anyone on this list flopped harder than Di Maria at Man Utd? Number five might push the Argentina star hard for that dubious honour but Di Maria was every bit as bad as Alexis Sanchez for much of his single season at Old Trafford, with even less effort. Maybe Ed Woodward is a genius for getting all but £15m of the then-record fee they paid Real Madrid.

BREAKING: Angel Di Maria has completed his move to #mufc for a British record fee of £59.7m. #WelcomeDiMaria pic.twitter.com/ySiDmJM0gD

6) Ousmane Dembele – £147.2m
Rennes – £11.7m – Borussia Dortmund – £135.5m – Barcelona
The France striker’s switch from Dortmund to Barca in 2017 represented the second-biggest profit in world football. Fair f*cks also to the official at Rennes who demanded a 25% sell-on clause be inserted into his move to Dortmund only a year before Barca spluffed most of the Neymar money on the 22-year-old.

5) Philippe Coutinho – £153.9m
Vasco da Gama – £3.4m- Inter -£8.5m – Liverpool – £142m – Barcelona
Coutinho could increase his figure should Barcelona decide to move him on this summer following a wretched season and a half at the Nou Camp. Though a Barca departure would also bring down Liverpool’s profit since around £36million of their agreement is made up in add-ons. If Coutinho moves again before September 1, Liverpool will trouser around £15million less.

4) Alvaro Morata – £155.8m
Real Madrid – £15.8m – Juventus – £24m – Real Madrid – £58m – Chelsea – £58m – Atletico Madrid
Morata is currently on loan at Atletico but Chelsea have already confirmed that the Spanish side will fork out £58m for the striker at the end of the coming season. Whoever negotiated Chelsea’s end of that deal deserves a pay rise…

3) Kylian Mbappe – £166m
Monaco – £166m – PSG
For the France star, one move is all it takes to make the top three. Zinedine Zidane would very much like to give him another one but Neymar’s strop seems likely to keep Mbappe in Paris for at least another year

2) Cristiano Ronaldo – £197.24m
Sporting Lisbon – £12.24m – Manchester United – £80m – Real Madrid – £105m – Juventus
The Portugal star smashed the world transfer record in 2009 when he joined Real but he still proved to be an absolute snip at £80million. Ronaldo smashed in 450 goals in 438 appearances – which is utterly mental – before Real sold him on to Juventus at a profit. But even if the 34-year-old has one more move left in him, he’ll still struggle to catch the leader…

1) Neymar – £246.6m
Santos – £71.5m – Barcelona – £198m- PSG
Given half a chance, Neymar would perhaps double his whopping total this summer. The Brazil star is desperate to leave PSG and return to Barca – though it seems he’ll consider almost anywhere – but his problem is that the only club who can afford him is the one he’s trying to flee. The £71.5million figure Barca paid in 2013 included a £35million payment to Neymar’s dad which, apparently, is legit…