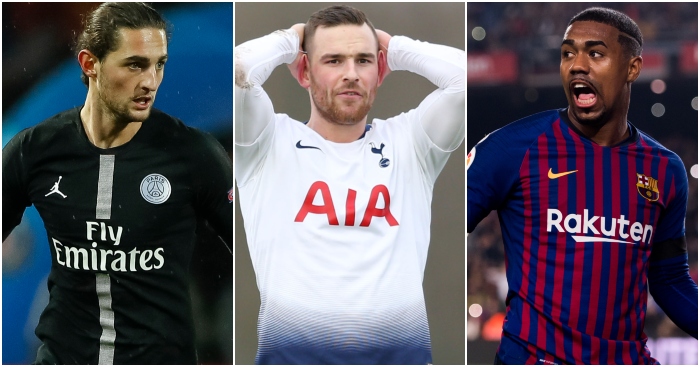 10) Mesut Ozil
The Arsenal playmaker is the least likely player on this list to move before Thursday’s deadline but Unai Emery has made it crystal clear the manager would prefer if he did. Ozil, though, is probably quite content to sit on the bench or in the stand for as long as the Gunners keep depositing £350,000 into his bank account every week.

Who else will offer the infuriating German a similar salary? Even CSL clubs would be wary of matching those terms, and though Atletico Madrid were credited with an interest earlier this month, there’s little to no hope of the Rojiblancos offering Ozil an Antoine Griezmann-sized contract. So it seems the 30-year-old will have to get comfy on the Arsenal bench unless a desperate chairman somewhere takes leave of his senses.

9) Marouane Fellaini
Given Ole Gunnar Solskjaer is doing everything he possibly can to paint himself as the anti-Mourinho, the writing appears to be on the wall for Fellaini’s Manchester United career. The caretaker boss gave the Belgian just three minutes of action during his six Premier League games in charge and many United fans will insist that 100 per cent record during Fellaini’s absence is no coincidence.

The 31-year-old has picked up a calf injury at a very inconvenient time for anyone looking to offer him a move, but the midfield battering ram will be fighting fit again next month. As well as interest from AC Milan, Porto and Guangzhou Evergrande, Thierry Henry was said to be interested in pairing Fellaini with Cesc Fabregas, but then Monaco fired the rookie boss which, again, is suspiciously coincidental.

8) Aaron Ramsey
It matters little to the Wales midfielder whether he goes now or he waits until the summer. Ramsey is still set to become one of the highest-paid British players when he jets off to Juventus, so he seems quite content to sit tight if needs be.

Juve, on the other hand, are said to be in rather more of a hurry. They are reported to be willing to compensate Arsenal for their inconvenience with cold, hard cash, or by sending a player in return. The Gunners have been linked with goalkeeper Emil Audero, who was due to remain at Sampdoria for the rest of the season. Regardless, given their current financial plight, it makes sense for Arsenal to claw something back for Ramsey and it’s hardly as though Unai Emery will dearly miss a player he has stuck on the bench more often than not this season.

7) Javier Hernandez
West Ham have spent most of the month trying to spend £35million on a striker and it seems Hernandez has got the message, in case Manuel Pellegrini was being too subtle in offering him only seven Premier League starts this season. But the Hammers are not so desperate to get rid that they would accept a loan offer.

“The situation is complicated,” said Valencia boss Garcia Toral, who says Hernandez is “keen to come”. Toral will have to shift Michy Batshuayi first, with the Chelsea striker likely to be parked elsewhere for the rest of the season after scoring only once in La Liga, while Los Che are unlikely to be the only side interested in Hernandez. The Mexico star has scored 13 times in a West Ham career that has only involved 28 starts and there are plenty of managers aching for a proven goalscorer.

6) Adrien Rabiot
The France star is refusing to sign a new contract with PSG, who aren’t used to hearing ‘no’. So the club banned Rabiot from first-team training sessions and even though the French players’ union have insisted the 23-year-old be reintegrated, that doesn’t mean Thomas Tuchel has to pick him any time soon.

Naturally, PSG want to recoup some money rather than lose Rabiot for nothing, which is Barcelona’s preferred option. It was reported that a pre-contract agreement had been reached but PSG would relish spoiling Barca’s plans in the wake of the Catalans’ capture of Frenkie de Jong. That resentment could strengthen Tottenham’s position, while Manchester City would surely be interested if there is a deal to be done before the deadline. PSG have a replacement lined up in Idrissa Gueye, but they will have to improve, perhaps double, their current offer.

5) Denis Suarez
This is all very messy. Suarez wants to leave Barcelona and the club are happy to let him go on their terms, which appears to involve an obligation to buy in the summer if any January deal is merely a loan. Arsenal are very keen to take Suarez on loan, but they do not want to be tied to a permanent deal at the end of the season; an option rather than an obligation to purchase is their preference.

With neither side willing – or in Arsenal’s case, able – to compromise, Suarez is stuck in the middle. Arsenal, apparently, have a Plan B which involves borrowing Christoper Nkunku from PSG. Suarez’s alternative is Real Betis or Sevilla but, apparently, he doesn’t fancy either. So he’s left hoping that the looming deadline will increase Barca and Arsenal’s willingness to compromise.

4) Yannick Carrasco
“Yes, they’re very interested,” replied Mrs Carrasco when the Belgian’s wife was asked whether Manchester United are among the clubs chasing her other half. Sides in Germany, Spain, Italy and England are apparently keen to bring Carrasco back from China, with Arsenal also flirtatious. But his wages and the fact they are unlikely to be able to borrow him first make the Emirates an unlikely destination.

Carrasco only moved to Dalian Yifang in February but the 25-year-old has reportedly already had enough. United may well have checked in but surely they have more pressing priorities. AC Milan are known to be keen and doubts over Ivan Perisic’s future make Inter a possible option too. Wherever he goes, it’s likely Carrasco will have to accept a reduction on his £155,000-a-week salary. The poor lamb.

3) Malcom
Much to Roma’s amusement, the Brazilian winger has been a huge flop since moving to Barcelona in the summer. Barca are open to offers for Malcom but they will struggle to convince any interested parties to give them back their £35million.

The 21-year-old has managed only one start in La Liga and the Champions League, with Ernesto Valverde only willing to rely on the attacker in the Copa del Rey. But Malcom struggled against Sevilla last week and a two-goal deficit makes it far more unlikely that he will feature in the second leg. Tottenham were keen in the summer but they appear to realise that they dodged a bullet.

2) Vincent Janssen
“I think it’s so clear that now it’s one year and a half that he’s not in our plans. He’s not in Tottenham’s plans. That’s so clear. Not in just the manager’s plans but the club’s plan.” Even when Spurs’ forwards were dropping like flies, Mauricio Pochettino still refused to consider Janssen.

Daniel Levy is reported to be willing to take a £5million hit on the striker signed for £17million from AZ Alkmaar in 2016. But even he will struggle to get £12million for a player who hasn’t played a competitive game for Spurs since August 2017. Dick Advocaat has tried to offer the 24-year-old a glowing reference for anyone who had forgotten the centre-forward’s existence: “Vincent, in my eyes, is a complete striker. He scores easily.”

1) Callum Hudson-Odoi
You wouldn’t describe £80,000 a week for an 18-year-old rookie as ‘too little’ but it seems Chelsea’s contract proposal and the offer of some playing time is too late. Hudson-Odoi submitted a transfer request on Saturday, and though he played and scored in the FA Cup win on Sunday when he was serenaded by the home fans with pleas to stay, he appears most keen to join Bayern Munich. Which is a good thing, right?

Bayern seem equally determined. They have submitted four offers, with their most recent of £35million almost three times the size of their first. The fact the Bundesliga club haven’t yet matched Chelsea’s salary offer but the player remains keen to go anyway suggests his motives are sound. If Hudson-Odoi doesn’t get his Bayern move this week, then he just needs to sit tight because he holds all the cards as he approaches the final year of his Chelsea deal. If by Thursday, Chelsea haven’t convinced him to soften his stance, then £35million for a teenager without a Premier League start really would be too good to turn down.