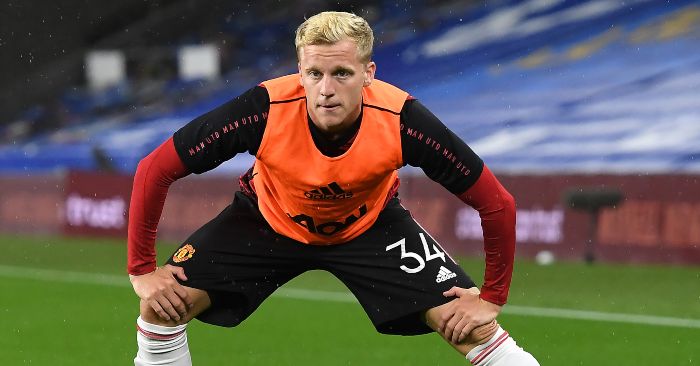 It is an inexact science but when searching Joe Hart’s name in Google, four questions appear under a headline of ‘People also ask’. After the most depressing trilogy since the most recent Star Wars films – ‘What happened to Joe Hart?’, ‘Is Joe Hart retired?’ and ‘Is Joe Hart on loan?’ – comes a pertinent point. ‘Why did Tottenham sign Joe Hart?’.

The goalkeeper himself stated a desire to “help the team any way I can” in his first interview upon joining, “be it on the field or off the field”. The emphasis is very much on the latter as sprightly understudy to Hugo Lloris, who is a bone-creaking four months older than his new training partner. Paulo Gazzaniga has been quite ruthlessly and needlessly cast aside to make way for Burnley’s second-choice goalkeeper, who probably made a bit more sense when he was third in the pecking order but just looks weird as a permanent fixture on the Tottenham bench.

In all honesty it was actually a sensible deal. Brighton tracked Joel Veltman for some time, activated his release clause and signed a 28-year-old three-time Eredivisie champion, World Cup bronze medallist, Europa League runner-up and Champions League semi-finalist for less than £1m.

But this list needs ten players and his only appearance so far this Premier League season was as a half-time substitute against Everton at Goodison Park. Brighton were drawing 1-1 upon his introduction and would go on to lose 4-2. Versatile as he is, Veltman is just another body in arguably one of the top flight’s deepest, most varied and potential-heavy ranks.

This list is done annually and at least one entrant usually make us look incredibly silly at some point. Last year wasn’t actually too bad but 2018 brought Fabinho, Jonny Evans and Bernd Leno while 2017 put forth the name of Alex Oxlade-Chamberlain. Liverpool do tend to trip us up with bizarre ideas like gradually integrating new signings into established first teams with advanced tactical requirements instead of immediately thrusting them into the unforgiving public spotlight.

The Alpine Klopp has followed suit with Mohammed Salisu, who is yet to make a single matchday squad since arriving from Real Valladolid and generating all the excitement. The Southampton manager did note last week that “he has to learn what we are doing, how we want to defend”, adding “I think one or two weeks, maybe, and then hopefully we will be seeing him”. So our impatience will be rewarded soon enough.

‘Currently’ is the operative headline word when it comes to Cengiz Under’s pointlessness at Leicester. His loan from Roma generated due attention and anticipation but he has played five minutes more than Marc Albrighton in the Premier League and Brendan Rodgers preferred to give Islam Slimani an opportunity when sifting through the depleted hand he was dealt against Aston Villa.

Under was an unused substitute then but did impress with his direct style to no avail in the home defeat against West Ham. Many more ineffective performances from Ayoze Perez could create an imminent opening on the right-hand side of an otherwise fearsome attack.

The recent claims of Porto president Jorge Nuno Pinto da Costa – that Wolves signed Fabio Silva for €40m despite the existence of a €10m clause in his deal – suggest this transfer was far from pointless for some individuals involved. Jorge Mendes likely deemed it essential and shrewd business.

And so he should, really. Silva has just turned 18 and is contracted to Wolves for the next five years. It could be a brilliant move and if not, they should recoup a decent amount of their money. That is a difficult team to break into and a tough manager to convince in any circumstances, never mind these. Yet Silva surely expected more than 40 cobbled-together minutes in the only two Premier League games his team have lost this season. The late substitute in defeats to Manchester City and West Ham remained on the bench against Sheffield United, Fulham and Leeds. That is what a club-record fee will get you nowadays.

Fabio's father, Jorge Silva, is a partner in the Soccer Talents Vision agency, who are in a partnership with Jorge Mendes and his GestiFute company. FC Porto are part of this deal. https://t.co/1veGGicxZO

The most expensive signing Fulham made this summer upon promotion will not feature for them in 2020/21. Anthony Knockaert was purchased permanently from Brighton for £10m before being packed up and shipped off to Nottingham Forest and fellow Championship cheat code Chris Hughton.

Scott Parker has a ready-made defence in that Knockaert simply played enough last campaign to automatically trigger a move. The winger featured 42 times in the second tier to cross the 30-game threshold but registered no goals and a single assist in his last 14 Championship appearances. This entire rigmarole could have been avoided with a bit more care, attention and impossible foresight.

Whisper it but Paul Merson might have been right. And Will Ford. There must be something about supporting Chelsea that imbues every fan with deep foresight of Manchester United’s plans for Donny van de Beek.

It does seem as though he was purchased in a bit of a panic by a club which hadn’t made a summer signing by that point and perhaps feared letting such a glorious and available talent join a direct rival. Van de Beek has indeed spent his nascent Premier League career acclimatising himself to benches across the country, the only Manchester United player to enjoy a proper pre-season being given 23, one, 22 and 14 minutes respectively during their inauspicious start. £35m is a lot to spend on a League Cup stalwart; Van de Beek is yet to play more than half an hour of a game for United outside of that competition.

Does a debut clean sheet at home to a Burnley side that fielded the centre-forward partnership Branislav Ivanovic dreams of at night – Ashley Barnes and Chris Wood – already negate his inclusion on this list? Probably. He was great and helped engineer immediate improvement in a West Brom defence that previously looked completely lost. And he was free. And will at the very least pass on some experience to more callow teammates.

But it’s too late now. His name is written in bold and fancy font. There is even a number next to it and clarification of his current team. The process is irreversible. Although proper judgement should be reserved until he faces some strikers who actually move and a team that doesn’t have a club motto of ‘Put it in the mixer ad infinitum’. It will feel more pointless when they get relegated and he leaves after a year, promise.

Chelsea might well have been reticent to loan Ethan Ampadu out again this season, such was the abject failure of a 277-minute spell with RB Leipzig in which he still managed to keep a clean sheet away at Tottenham because they are committed to being the punchline of every possible joke. But Sheffield United were able to persuade the Blues that they offered a more stable home for the Welshman to thrive and the deal was done.

He has already started more league games at Bramall Lane than he managed in the Bundesliga yet opportunities have hardly been forthcoming. Ampadu could offer something different in midfield, even if defence seems his most likely entrance point. Any bittersweet hope Jack O’Connell’s season-long injury offered has been extinguished with Jack Robinson and Enda Stevens trusted to fill in. Perhaps Chris Wilder’s tactical demands are so nuanced and his squads too tightly knit for an inexperienced 20-year-old loanee to establish himself.

He's directly up against Egan and Basham, two absolute stalwarts. Don't think he's heavily in contention for the LCB spot as Wilder has only used left-footed players there (O'Connell, Robinson, Stevens) for the cross/overload.

It looked pointless in January and seemed positively inexplicable when Arsenal made the signing of Cedric Soares from Southampton permanent five months and three forgettable starts later. The 29-year-old was given a four-year contract for his troubles; how long would that commitment have been if he’d actually had a tangible impact?

That is a little unfair. As ever, his contribution away from prying eyes has likely been more telling in helping further develop Hector Bellerin’s game while flaunting his European Championship winner’s medal to inspire Arsenal’s recent trophy-hoarding. But Arsenal have about 427 centre-halves, at least some of whom could comfortably fulfil the role of right-back-up if Ainsley Maitland-Niles doesn’t fancy it. As it is, Cedric has not made a single Premier League match-day squad so far this season and can be found knocking around with the U23 side.

If you’re so lazy that you’ve just skim-read this, or just because you want to see Steady’s face, here’s the Top Ten in video form.