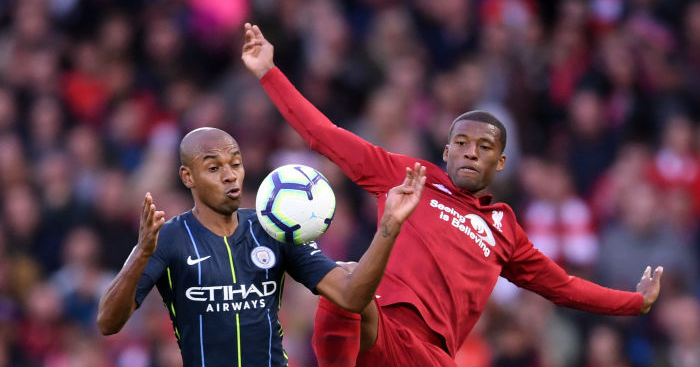 Before you kick off, if a player you’d expect to feature here is not present, wait for next week’s rundown of attacking midfielders first. Although Nemanja Matic is not on that list either.

And don’t forget to get angry at our list of the top ten signings, top ten goalkeepers, top ten full-backs and top ten centre-halves of the season.

10) Luka Milivojevic
As one of the only two players to score both home and away against Manchester City in the same season over the past two Premier League campaigns, Luka Milivojevic’s nerve cannot be questioned. Christian Eriksen achieved that feat in consecutive defeats, but the Crystal Palace captain came from Serbia to help f***ing murder the champions in December.

Milivojevic has two games left to match Andy Johnson’s Premier League record of 11 penalties scored in a single season. But the 28-year-old’s ten spot-kicks do nothing to dilute his importance to the Selhurst Park cause.

Ben Mee and Conor Coady are the only other outfielders to play every single minute of this Premier League season. Wilfried Zaha remains the king of south-east London, and Aaron Wan-Bissaka his prince, but Milivojevic is a fine leader of the royal guard.

9) Joao Moutinho
As the younger, sleeker and more imposing model, many still see Ruben Neves as the superior member of this mouth-watering Wolves midfield. Yet he knows better than anyone the virtues of respecting your elders, and would happily concede that a player ten years his senior has set the Molineux benchmark.

There has been no more impactful Premier League bargain in the last decade, never mind this season. Joao Moutinho has been a revelation on the pitch but his experience and knowledge have helped Wolves with the seamless transition from second-tier champions to top-flight threat. He has more international caps (114), career trophies (14) and sexual charisma (427) than any teammate.

It is a dreadful shame that these shores have been graced with his presence only in his twilight years, with those Everton and Tottenham near-misses leaving a bittersweet taste. His performances this season, and the promise of more excellence next campaign and perhaps beyond, certainly cleanse the palate.

8) Paul Pogba
To question Premier League footballers for recency bias, simplicity and one-dimensional thinking is to criticise an unattended child for smearing faeces all over the wall. But let the furore over Paul Pogba’s PFA Premier League Team of the Year inclusion not mask what has been a largely positive, productive season.

Pogba scored and assisted three Premier League goals each in 14 appearances before being benched at Liverpool on December 16. He then impressed against the Reds on February 24 at Anfield in a more subdued role, starting an ongoing run of just two goals and one assist in ten games.

The Frenchman played nine league matches in the 70-day interim, scoring eight goals and assisting five. That only nine players have scored more Premier League goals and six beat him for assists suggests he has been neither as good as some believe, nor anywhere near as bad as others would attest.

7) Declan Rice
A career that was bubbling away nicely has been brought to the boil. Declan Rice has already firmly established himself in a difficult position and a demanding league at a precocious age.

The 20-year-old was an excellent spare part last season, swapping between defensive midfield and centre-half under the confused reigns of Slaven Bilic and David Moyes. He did not start a Premier League win until March 31, and played less often than Pedro Obiang and Javier Hernandez.

After starting just one of West Ham’s four consecutive Premier League defeats to start the season, Rice has played every minute, growing in stature with each pass, tackle and interception. He is the jewel in the West Ham and Ireland England crown.

6) Etienne Capoue
As the silent, stoic brains behind the impressive operation – the Teller foil to Abdoulaye Doucoure’s Penn-esque showman – Etienne Capoue is easily overlooked. He is an older, more familiar presence to a Premier League audience that craves at least a modicum of youthful mystery.

Doucoure has been excellent, and has a much higher ceiling of potential; Capoue has not only reached but surpassed his this season. Having been lost in the Tottenham shuffle, he has made the most interceptions (85) of any player across Europe’s top five leagues.

He has been the unheralded star of a team likely to combine a top-half finish with an FA Cup final. Before this season, our only enduring memories of Saint Etienne were of Michael Owen giving Roberto Ayala nightmares and the president of Inter Miami kicking Atletico Madrid’s manager. Capoue has done his utmost to change all that.

“He’s an outstanding player,” the German added, speaking in December. “He combines a lot of things that you need.”

Aside from the obvious energy, technique and versatility, Wijnaldum has provided consistency amid constant midfield upheaval. Fabinho and Naby Keita have both taken time to settle, James Milner has failed to scale the same heights as last season and Jordan Henderson has only recently reaffirmed his worth to the cause. The lights of each have shone and burnt out in equal measure; Wijnaldum’s has barely flickered.

The plaudits will only naturally go to the sublime goalkeeper, phenomenal defence and exhilarating attack. The midfield of an almost flawless side has had its issues, with Wijnaldum the exception to the rule. The Dutchman has ensured that the sum of Liverpool’s brilliant composite parts form an even greater whole.

4) Moussa Sissoko
Harry Winks has impressed, but made 76.4% of his overall Premier League starts from December to March. Eric Dier has not started in a league win this year. Victor Wanyama has only recently remembered to exist. Danny Rose is an experiment that really ought to end sooner rather than later. All of which leaves Moussa Sissoko as the only reliably brilliant central-midfield flag-waver for a Champions League semi-finalist third in the table.

Only Toby Alderweireld, Christian Eriksen, Hugo Lloris, Harry Kane and Heung-min Son have been given more minutes for Tottenham in all competitions than Sissoko, who has helped stitch together a season that could have fallen apart at the seams upon Mousa Dembele’s sale and the subsequent injuries. It has been quite the unprecedented journey.

3) Fernandinho
It takes a lot to impress Graeme Souness. Well, that’s a lie; it takes a crunching tackle within the opening five seconds of a game to render him half-mast. But a general 90-minute performance requires a little more nuance, some added dimensions, effort in abundance and nothing more extravagant than a short back and sides to sate his midfield appetite.

“Fernandinho is easily the best central midfield player in our country right now,” he said in January. “The amount of work he gets through is overlooked by the technique he has as well.”

The Brazilian remains a key part of a side that has dropped 30 Premier League points since May 2017. Fernandinho turns 34 next month yet Pep Guardiola’s search for his successor continues, such is his distinctive skill set. City’s points-per-game record when he has started this season is 2.63, compared to 2.33 without him. Those are the fine margins that have defined this title race.

2) Idrissa Gueye
Everton fans should never ridicule or mock Tim Sherwood again. Idrissa Gueye might have eventually found his way to the Premier League without using Aston Villa as a stepping stone, but he of formerly the best win percentage of any Tottenham manager ever provided a helping hand on that journey.

Gueye showed signs – as many as relegation allowed – of what he could become over 12 months at Villa Park, but has truly realised his potential this season. Rumours of interest from PSG and Manchester United are no mistake: the 29-year-old is at the absolute peak of the defensive midfield profession. The only players with more combined Premier League tackles and interceptions than his 202 are Wilfred Ndidi (208) and Aaron Wan-Bissaka (206).

Everton’s record without the Senegalese speaks volumes: their only Gueye-less win this season was a 1-0 victory over Huddersfield in January, with the club losing three and drawing the other one. It was a similar story last campaign, when a 2-0 win over Brighton was bookended by two defeats and two draws.

Gueye’s absence in the 6-2 defeat to Tottenham in December underlined the stark difference he makes to this team. He has made more tackles (135) in 31 appearances than Gylfi Sigurdsson, Andre Gomes, Morgan Schneiderlin and Tom Davies combined (134) in 90 games.

1) Bernardo Silva
It was the bar that surely could not be raised. Manchester City broke records and redefined competition levels last season, dropping 14 points as they sauntered to the most dominant title win in English football history. Kevin de Bruyne, with eight goals and 16 assists, was the irresistible, peerless lynchpin.

The challenge of reaching that same standard was made infinitely harder by the Belgian’s injury-enforced absence. De Bruyne’s first Premier League start this campaign came on Boxing Day, and his four combined goals and assists have come against Crystal Palace and Cardiff. Yet City are somehow on course to drop just 16 points in successful defence of their title.

And it really is quite unfathomable. Sergio Aguero has continued his consistent brilliance and Raheem Sterling has embraced a greater share of the burden, but many City players have understandably deteriorated since last season. David Silva has been a shadow of his former self, Leroy Sane has played considerably less often and Kyle Walker has regressed, too.

Two players in particular have helped bridge that gap, with Ilkay Gundogan and Bernardo Silva the only ones to improve their league returns of both goals and assists from last season. But as good as the former has been, the latter has assumed De Bruyne’s mantle with unerring genius.

His season has been adorned with decisive moments: the assist for Aguero’s opener against Liverpool in January; his winning of the penalty in a 1-0 victory over West Ham in February; a match-deciding turn against Swansea in the FA Cup; the opening goals in wins over Bournemouth, Fulham and Manchester United.

But his campaign has been defined more by the intangibles – the energy, the skill, the composure, the movement, the technique – that have helped set City marginally apart. Save for Virgil van Dijk and Sterling, there has been no better player.