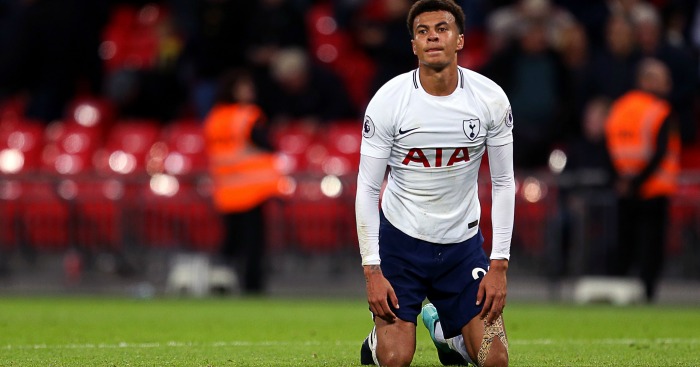 10) Anthony Knockaert
Seven games into the Premier League season and last year’s Championship Player of the Year has been relegated to the bench. “The decision was more tactical,” said Chris Hughton, when given the option of protecting the Frenchman after he publicly admitted that he was still struggling with his father’s death. “It’s going to be tougher for him this season. We’re going to be up against better teams with better full backs,” continued Brighton’s manager, who opted for the impressive Solly March and the expensive José Izquierdo at the Emirates.

Picked by almost every commentator and pundit as the key to Brighton’s survival this season, the evidence so far suggests – on that basis at least – the Seagulls are already sunk. While Pascal Gross and March have provided bright moments in a cautiously decent start, Knockaert has struggled. No goals, no assists and only six of 16 dribble attempts have been successful. Anybody who saw him in the Championship expected rather a lot more.

9) Marko Arnautovic
“I like him as a player, but sometimes he gets happy with the few things that he does when I want him to push the borders. I know what he’s capable of and I want him to keep molesting the opposition and never be happy in a positive way,” said Slaven Bilic after the Austrian was admittedly excellent in a Carabao Cup win over Bolton. Well done, Marko. Four days later, there was little or no molestation during a terrible 65 minutes against Tottenham in which he completed seven passes.

On Saturday, while West Ham were eking out a 1-0 win over Swansea, Arnautovic was absent with the same stomach bug that Cheikhou Kouyate shrugged off to play 90 minutes – as if he wasn’t already being eyed with suspicion by Hammers fans for a ridiculous elbow on Southampton defender Jack Stephens. Ladies and gentlemen, we give you £26m and the supposed natural fit as a belated replacement for Dimitri Payet.

8) A post-Puel Southampton
If Claude Puel was sacked more for the soporific nature of Southampton’s football than reasonable results that saw the Saints actually finish in eighth, Mauricio Pellegrino should not get too comfortable down on the south coast. The Saints may have scored only 41 goals last season (the top half’s lowest total) but they are on course for a grand total of 27 this season in this brave new era of sparkling football. Those who travelled to Stoke on Saturday watched the Saints ‘enjoy’ 71% of pretty sterile possession but hit the target just three times.

“We were unlucky, we were pushing until the end and we put them under pressure all the time. It’s part of football,” said Pellegrino. It’s certainly become part of football in Southampton, and we really should not be surprised after they addressed last season’s goalscoring problems by buying defenders and defensive midfielders. We are not surprised but we are disappointed.

7) Kelechi Iheanacho
Ah, the supposed £25m bargain of the summer, the striker with the ridiculous goals-per-minute ratio who had scored 21 times in two seasons despite never really playing football at Manchester City, who was so highly valued that City insisted on securing first dibs ahead of him inevitably scoring 20 goals in his first season. Yes, that Kelechi Iheanacho. He has so far started one Premier League game, scored no goals and attempted two shots (both blocked).

“His goalscoring record is excellent. He gives us another dimension. He wants to get better, he wants to play regularly and hopefully we can give him that platform,” said manager Craig Shakespeare before the season, but the Leicester manager cannot quite bring himself to split up the partnership of Jamie Vardy and Shinji Okazaki. This is the club who have made 11 signings in the last three windows and yet, of those, only Harry Maguire and Wilfred Ndidi started the 0-0 against Bournemouth at the weekend. They don’t like incomers in Leicester.

6) Crystal Palace
You could have secured 5/1 on their relegation before the start of the season; now they are 8/15. There were mistakes made in the transfer market, it was clearly an error to leap from pragmatic percentage football to a possession-based style modelled on Ajax, but Palace still should not have been anywhere near this bad. Literally nobody predicted this level of disaster. Not with Christian Benteke, Wilfried Zaha, Andros Townsend and Yohan Cabaye. Just compare that little line-up to the players available at Burnley or Brighton or Huddersfield Town.

But Benteke has been woeful and then injured, Zaha is crocked, Townsend has been peripheral and Cabaye has got so sick of seeing chances spurned that he simply shoots from distance and hopes for a helpful gust of wind or a deflection. They now look utterly devoid of confidence and Roy Hodgson is facing the single biggest challenge of his career to eke out a relegation fight, never mind survival.

“Away from home he’s a liability – he just doesn’t do enough,” said Steven Gerrard after the defeat at Stoke, but his rant was ill-timed – Ozil had been quite productive at the Britannia; the following week at Liverpool was when the German’s effort levels reached their nadir. “I’m fuming. It’s just pathetic,” said Gary Neville, who singled out Ozil and Aaron Ramsey during the embarrassing 4-0 defeat.

We have defended Ozil against snipes from the lazy and the ignorant ever since he arrived at Arsenal, but even we cannot defend him now. It is telling that in Arsenal’s unbeaten September/October, Ozil has started only one of seven matches. “I don’t think Wenger can completely trust him any more,” said Martin Keown last week; his theory is that the German is withdrawing his services to force a transfer in January.

But we still believe. Ish.

Robbie Savage judging Mesut Ozil. It's like a pile of shit judging a gold-plated rose

4) The disappearance of Luke Shaw
“It looks like he is testing them mentally. Hit them with something – are you going to stay down or are you going to get up and fight? If you get up then he says yes, that’s the type of man I want in my team,” is the theory of Rio Ferdinand when asked why Luke Shaw was once again denied even a place on the bench against Crystal Palace at the weekend. Whatever the reason – and some still believe it is revenge (served cold) for Shaw snubbing a move to Chelsea – it is sad to see the career of a young talented player stalling in second gear.

Manchester United’s failure to sign a left-back this summer gave us false hope that Jose Mourinho was planning on showing faith in Shaw; how were we to know he was always thinking of Ashley Young? The real winner? Aaron Cresswell. “You could well argue there are one or two in the squad who haven’t necessarily warranted it on their performances,” said England manager Gareth Southgate when he picked his latest squad. We suspect he would quite like to see Shaw in one shirt or another before next summer; we certainly would.

3) Jurgen Klopp
We have little to no truck with the comparisons to Brendan Rodgers’ win record at Liverpool – it’s a facile method that takes no account of a thousand variables – but you will not find a Liverpool fan who did not expect more from Klopp this season. More innovation, more change, more organisation, more culpability. What they have got instead is the same game played out again and again, with the same defensive mistakes, the same wastefulness in front of goal, the same formation and the same manager insisting that their luck is about to change.

There was too little done in the summer, with tweaks made to the squad when they arguably needed a whole new spine ahead of a return to the Champions League. Mo Salah has been a success but neither Andy Robertson nor Alex Oxlade-Chamberlain has been trusted. Klopp argues that he can do little to either prevent mistakes or convert chances, but when you are taking an average of 19.6 shots per game and allowing just 8.4, a goal difference of +1 is an aberration. We did not expect a title challenge but nor did we expect Liverpool to enter the second international break behind Burnley on goal difference. Step up, Jurgen.

2) Dele Alli
Various algorithms and over-excited pundits valued Dele Alli at upwards of £130m last season, with Jamie Redknapp among those to say that the Englishman had eclipsed Paul Pogba. Anybody reading those valuations and plaudits would be utterly confused watching the very ordinary Alli this season. Highlights in this campaign include winding up Jonjo Shelvey, flipping the bird during an international match and being booked for a ridiculous dive at Huddersfield. There have been two Premier League goals, but a No. 10 playing for this Tottenham side with little defensive responsibility really should be scoring more often than Ben Davies.

“This time last season, we were all talking about Dele Alli’s world-class, all-action displays. Now he is grabbing headlines by getting involved in silly incidents,” said Redknapp this week. He is disappointed and so are we; Alli is playing like a man who already thinks he is the best in the world when there really is a fair distance to travel.

1) Everton
We all just assumed they would finish seventh, using the logic that a team that finished seventh and then spent over £140m really should be at least as good as before. What we did not fully realise until we looked at the squad on the opening day was that Everton had somehow managed to spend over half that money (plus some pretty sizeable wages) on a collection of No. 10s with very little pace. It has resulted in astonishingly bad football, typified by very slow build-up play and then a flurry of long-distance shots.

We knew they would miss the goals of Romelu Lukaku but who expected things to be so desperate that Oumar Niasse would be cast in the role of saviour before September was over? In seven Premier League games, no player has had more than four shots on target. In total, only Swansea and Crystal Palace have been less potent.

Mourinho was well wide of the mark in suggesting that free-spending Everton should have top-four hopes, but they certainly should not be making our tired eyes bleed. We are close to demanding the return of Aaron Lennon.