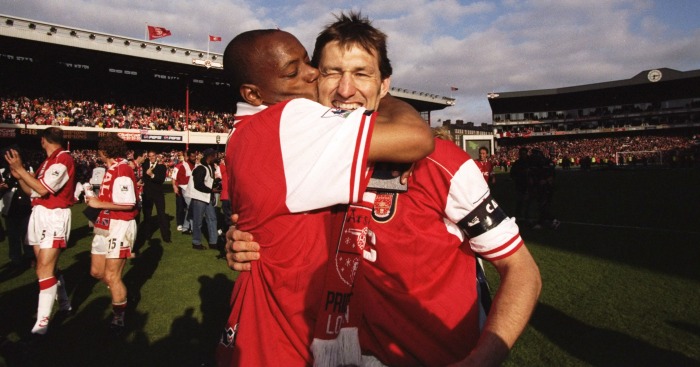 So, with that in mind, it’s time to take a look not at the good goals, not at the really good goals, but at the really, really good goals scored by defenders in the Premier League. And we’re talking goals from open play here, in order to truly appreciate the beauty of a defender finding himself in the opposition half and coming up with the goods. Apologies go to John Arne Riise, Maynor Figueroa and Leighton Baines. Although he might still crop up…

10. Nedum Onuoha (Chelsea v SUNDERLAND, 2010)
When it was reported in January that David Moyes had scrawled the name of Nedum Onuoha at the bottom of his winter transfer shortlist, beneath Nuno Valente and Joseph Yobo, the reaction from the footballing world was uniform: How the f*** is Nedum Onuoha still only 30?

The reaction from Sunderland fans was, on the whole, and rather understandably, one of apprehension and resignation. The defender has twice been relegated with QPR; he is hardly the secret to Premier League safety. But he is fondly remembered on Wearside for one ridiculous performance on a bitter November afternoon in 2010.

Asamoah Gyan and Danny Welbeck were among the goals in a 3-0 Black Cats win at Stamford Bridge a little over six years ago, but it was Onuoha’s opener which set the scene. A first-half Branislav Ivanovic clearance was intercepted 40 yards out. Time seemed to stand still as Onuoha, on loan from Manchester City, considered his next move. He stumbled closer to goal, coaxing John Obi Mikel from his midfield slumber. The defender then slalomed between the Nigerian and Jose Bosingwa’s unibrow, and he was suddenly in the penalty area. Ivanovic attempted to thwart him, but it was too late. Onuoha had sliced a shot between the Serbian and Petr Cech, and the ball nestled into the bottom corner.

It was the first away goal Chelsea conceded that season, and the funniest part of it all was that Onuoha himself had absolutely no idea what had just happened. His celebration was comprised of a knackered run back into position, while Jordan Henderson and Michael Turner screamed in his face.

9. Leighton Baines (WIGAN v Tottenham, 2007)
John Terry and David Unsworth. So ends the list of defenders to have scored more Premier League goals than one Leighton John Baines. But while England’s Lion’s 40 strikes came from a combined two yards and over half of Unsworth’s goals (20 of 38) came from the penalty spot, Baines has proven himself the don of set-pieces both close and far. His greatest hit however, was from open play.

His first two goals in England’s top flight both came in 3-1 defeats to Manchester United, but his third was something else entirely. Alongside Emile Heskey and Kevin Kilbane, the left-back helped Wigan to a 3-3 draw against Tottenham in April 2007. In a game where Dimitar Berbatov did Dimitar Berbatov things, it was Baines who provided the most stylish moment.

8. Phil Jagielka (Liverpool v EVERTON, 2014)
It is not Romelu Lukaku. It is not Ross Barkley. Heck, the last Everton player to score at Anfield was not even Denis Stracqualursi. Instead, it was Phil Jagielka who stepped up to the plate and thwacked the ball past Simon Mignolet in a Merseyside derby draw in September 2014.

The goal had absolutely everything. It was a second-half stoppage-time equaliser from the captain at the end of an intense derby. It was a centre-half lashing home a 25-yard half-volley. It assaulted the top corner. It made Phil Thompson a bit sad. It was bloody great.

7. Danny Rose (TOTTENHAM v Arsenal, 2010)
It was in March 2009 that Ken Bates, then Leeds chairman, wrote that Danny Rose had “disappeared into the obscurity of the Spurs training ground”. The left-back had departed the then-League One club to move to White Hart Lane in July 2007, but had been loaned out twice and had not made a single first-team appearance in almost two years.

Rose was 18 at the times of Bates’ comments. A year later, in April 2010, he was finally handed his debut by Harry Redknapp (In midfield, you numpty – Ed). To say he delivered is an understatement; his bending, swerving volley sent Tottenham on their way to a 2-1 north London derby victory over Arsenal. Poor Manuel Almunia never knew what hit him.

6. Emmerson Boyce (Swansea v WIGAN, 2012)
Henrikh Mkhitaryan and Olivier Giroud might think they’re good, but Emmerson Boyce was doing it before it was cool. A scorpion-kick goal is eminently more marketable if scored by a Manchester United or Arsenal player, never mind if scored in an actual victory, but there is something charming about it being a consolation in a defeat to Swansea.

Boyce is no stranger to the spectacular – the second of his two goals in a 3-2 win over Wolves in May 2012 was a corker, while his tackle on Edin Dzeko in the FA Cup quarter final in 2014 was crazy stupid good – but this was a strike ahead of its time.

5. Tony Adams (ARSENAL v Everton, 1998)
Perhaps the archetypal defender’s goal. It was May 1998, and Arsenal were hosting Everton at Highbury. The Gunners needed a victory to seal their first Premier League title under that French bloke who made them eat pasta and stop drinking copious amounts of alcohol. The scene was set.

As it was, the game was a procession, simply a prolonged crowning ceremony. An own goal from Slaven Bilic handed the Gunners the lead, while Marc Overmars made it 3-0 with goals in either half. The title was headed to north London.

But not before Adams could have the final say. Don Hutchison sauntered out of midfield for Everton, losing the ball to David Platt. Future Arsenal manager and current Emirates overlord Steve Bould received the ball, and defensive partner Adams smelled blood. He sprinted straight through the defence, timing his run perfectly to latch onto Bould’s wonderful pass, before the captain leathered the ball past Thomas Myhre. Thomas Frankinscence and Gold wouldn’t have stood a chance, either.

4. David Luiz (Fulham v CHELSEA, 2013)
The downside of playing as if one is “controlled by a 10-year-old in the crowd on a Playstation” is obvious. In David Luiz’s first spell in the Premier League he displayed his obvious talents, but he was prone to error and lapses of concentration in the Chelsea defence. He left the club a European champion, but also a source of ridicule.

The positive of playing as if one is “controlled by a 10-year-old in the crowd on a Playstation” is thus: you are not averse to shooting from wherever possible, and if you hold down the button for long enough you might just get lucky. Luiz’s first spell in England might not be as revered as his latest, but it is unlikely that he will better his 2013 effort against Fulham under Antonio Conte.

3. Jon Harley (FULHAM v Aston Villa, 2003)
An FA Cup winner with Chelsea in 2000. Burnley’s 2005/06 Player of the Season. A friend of John Terry. A man who couldn’t get a game ahead of Celestine Babayaro. Jon Harley has had many a nickname bestowed upon him in the past, but none capture the sheer thunderous beauty of his greatest moment.

Forget that it was Peter Enckleman in goal. Forget that it nearly struck the beautiful face of Olof Mellberg. Forget that Harley was partially at fault for the opener from a young Gareth Barry. Forget that Wikipedia describe it as ‘a somewhat outstanding goal’. Forget all of that, and just sit back and bathe in its magnificence.

2. Gary Cahill (ASTON VILLA v Birmingham, 2006)
There are many ways to win a Second City derby. The last manager to do so was Tim Sherwood, whose tactic in September 2015 was to lure Birmingham into a second-half sense of security by playing really badly in the first. It was a masterclass.

Birmingham have had their fair share of derby victories, of course. Nikola Zigic bundled home a late winner in the League Cup quarter-finals in 2010. And who could forget Johnny Campbell’s remarkable and timeless four-goal haul in 1895? His second goal was bloody brilliant, wasn’t it?

Start the week by reliving Gary Cahill's wonder strike for Villa in a 3-1 win over Birmingham City from the 2005/06 season. #AVFC pic.twitter.com/mz2If3e6gp

But the most glorious of derby winners belongs to Gary Cahill, the Aston Villa youth system graduate whose first ever career goal was a bicycle kick. He might have set the bar a little too high.

1. Philippe Albert (NEWCASTLE v Manchester United, 1996)
The goals on this list are all reasonably identifiable as having been scored by a defender. They tend to be moments of instinct, where the compulsion to put your foot through the ball to clear manifests itself as a thunderous and powerful effort which compromises the very existence of the top corner.

The other goals are more graceful, yet still bear the hallmarks of an individual who was briefly possessed. Only the perfect storms allowed Onuoha to forget his surroundings and saunter through Chelsea’s defence, while Boyce and Cahill could never replicate their efforts again.

Philippe Albert’s goal is different. When he sought to lob Peter Schmeichel in 1996, he did so to provide the exclamation mark to an already rather loud scoreline. Newcastle had toyed with Manchester United for almost all of the previous 82 minutes, but this provided the necessary emphasis to ensure a place in history. Albert knew precisely what he wanted to do, and no-one could stop him.

The burst forward, tempting the keeper out of his goal. The perfect execution, which fooled three defenders. The eternal wait for the ball to caress the back of the net. The moment where Schmeichel’s hopes dissipate as he plants his feet, before the Dane has to watch as Albert’s effort floats over his head and into the goal. It is a goal which is immortalised on T-shirts and, for some, defines a quite wonderful era of top-flight football in England.