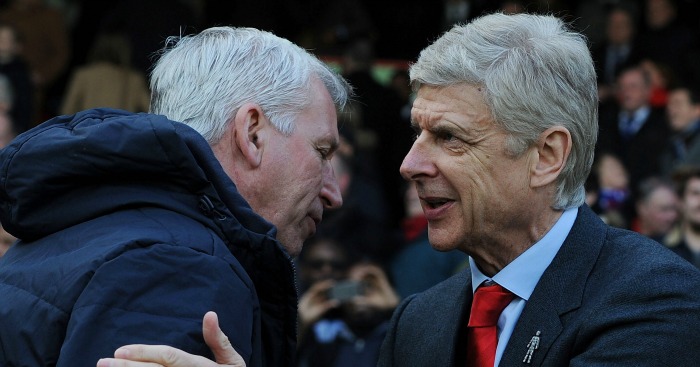 It’s that time of the year again…

10) Manuel Pellegrini (Manchester City)
Having topped last year’s list, the only way was down (quite a long way) for a massively flawed manager in charge of a massively flawed side. But in this bizarre era of wonderful/rotten top-flight English football, massively flawed managers and massively flawed teams can still win titles and indeed can still amass more points (while scoring more goals) than almost all their rivals over a calendar year. Which is obviously the only measure of true success. So City are still the favourites to win the Premier League title despite failing to produce a single truly memorable performance this season.

Any doubts about including the arguably underachieving Pellegrini in this list at all were eradicated by City’s European progress. It’s been a long time coming but they finally look like genuine contenders. The quadruple is on (technically).

9) Jose Mourinho (Chelsea)
There was some umming – and equal amounts of aaahing – about the inclusion of Mourinho, but not finding room for the reigning Premier League-winning manager in a list of the finest Premier League managers of the year would be short-sighted in the extreme. Winning two of the year’s three domestic trophies deserves some acknowledgement, even if it is accompanied by a shake of the head and a mouthed ‘what the f*** happened though?’.

Although 2015 began with a sobering 5-3 defeat to Tottenham and ended for Mourinho with ‘mutual consent’, what happened in between was a relentless 16-game unbeaten streak that claimed the title. That what then followed was disaster only determined where on this list Mourinho would finish. And who wouldn’t be flattered to follow in the same footsteps as Gus Poyet (2014), Malky Mackay (2013) and Nigel Adkins (2012)?

8) Nigel Pearson (Leicester)
Although he will forever be remembered as the man who wandered down the high street before the Lord Mayor’s Show, any manager who takes his side from 20th as the year begins to 14th in May deserves praise untempered by what came before or what then remarkably followed with largely the same group of players.

Pearson may have been forced to clamber out of deep holes dug with his own hands, but Leicester’s Sunderland-esque revival in April and May – when they won seven of nine Premier League fixtures  – owed much to a manager who never lacked gumption, even if it sometimes made him look like a bullying PE teacher from the 1970s.

7) Eddie Howe (Bournemouth)
There is always space on this list for managers who have dragged their side up from the Championship and kept them ahead of the curve in the first half of their virginal Premier League season. Sean Dyche eventually faltered after featuring this time last year; if Eddie Howe ultimately fails, he will emerge with similar, undented credit.

Bournemouth started the calendar year top of the Championship and survived a difficult February to return there ahead of more expensive, historically stronger clubs. That strength of character would emerge again in the top flight when long-term injury robbed them of three key players, and again when four straight, painful defeats left them in a relegation zone that looked destined to be their long-term home. Another, less charming manager called it bouncebackability; whatever the word, Eddie Howe and his side have it in shovels.

6) Mark Hughes (Stoke)
Consistency in the midst of slow revolution is to be applauded, even if phrases like ‘record points haul’ make us despair a little about the measurement of success. What would be really quite nice for the Potters – after establishing themselves as a practically untouchable Premier League side – is silverware. But for now we can laud Hughes for steering a steady ship while simultaneously making the deck look varnished and pretty.

Hughes has built a team in the image of himself as a player – uncompromising and yet capable of moments of awe-inspiring genius. A kick to the bollocks followed by a sumptuous overhead volley. Who doesn’t like that? Xherdan Shaqiri, Ibrahim Afellay, Marko Arnautovic and Bojan all started Stoke’s recent victory over Manchester United; thank you, Mr Hughes.

5) Quique Sanchez Flores (Watford)
The Hornets have amassed more Premier League points in 2015 than Aston Villa; just think about that for a second. And this despite breaking every supposed rule for survival in our supposedly unforgiving top flight – bringing in a whole raft of foreign players and a manager with no experience of English football. Quique who? He’s no Sam Allardyce. Thank f***.

Flores is quiet, understated and clearly believes in hard work over imagination, creating a solid, English-style 4-4-2 in which discipline and organisation rule over flair. He calls Troy Deeney the “soul of the team”, but Flores himself is the brain. He came, he thought and, so far, he has conquered.

4) Mauricio Pochettino (Tottenham)
Just eight games lost in the whole of 2015 – a record that should embarrass both Louis van Gaal and Jose Mourinho, whose resources dwarf those afforded to Pochettino. The Argentine has shed expensive mistakes while improving a Spurs side with youth at its core. This is a Tottenham side built on energy and endeavour rather than the usual precarious quicksand.

From seventh as 2014 clicked into 2015 to an unlikely title challenge as 2015 gives way to 2016, Pochettino has delivered whilst remaining under budget in a way that Arsene Wenger must admire. Been there, done that, didn’t buy the t-shirt because stadiums have to be paid for.

3) Claudio Ranieri (Leicester)
Some may raise eyebrows at Ranieri – delivering the unlikeliest of title challenges with the unlikeliest of squads – being below Arsene Wenger in this list, but this is an award for 2015. Ranieri has done half a brilliant job, but it is nevertheless still only half a job. The plaudits still come with caveats.

For now though, sod the caveats: Ranieri has been simply phenomenal. He has developed a low-possession, high-energy counter-attacking style that perfectly suits the personnel he inherited, while adding understated solidity in N’Golo Kante and Christian Fuchs. Dismissed as a joke by some journalists ahead of the season, we would like to think the Italian has been p***ing himself laughing at what has ensued.

2) Arsene Wenger (Arsenal)
Wenger topped this list in 2013, failed to feature at all in 2014 and then sits high in 2015; that pretty much sums up Arsenal under Arsene Wenger, winning alternate calendar league tables while their rivals stubbornly concentrate on that overrated August-May timeframe.

But this list is not the place for recriminations – we are here to judge a calendar year and Arsenal have delivered more points, while conceding fewer goals, than any of their peers. It has undoubtedly been the year when Wenger has learned how to win games in a different way (2-0 at Manchester City in January felt like a watershed moment) but it has also been the year in which they have continued to lose games in the usual way (see Boxing Day v Southampton). It was ever thus.

1) Alan Pardew (Crystal Palace)
Only Arsenal and Manchester City have won more Premier League games than Crystal Palace in 2015. Leicester’s remarkable rise has taken attention away from an equally astonishing story in which Pardew is cast as the not-reluctant-at-all hero. He may be unbearably smug, but on this occasion his smugness is more than justified.

He left a loveless marriage in Newcastle for his south London soulmate and the honeymoon has lasted a whole year. From the relegation zone to the top five. From likeable yo-yo club to solid Premier League outfit. From signing Jordan Mutch to signing Yohan Cabaye. Congratulations Chunky, you have been bloody brilliant.