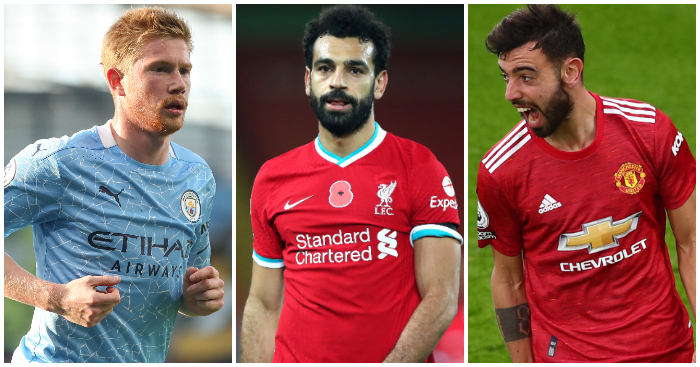 10) Jamie Vardy
Vardy finished last season as the Premier League’s top scorer and this season, he trails Mo Salah only by a couple. He remains as integral as ever to the Foxes, with his potency a large reason why Brendan Rodgers’ side have the best shot conversion rate in the division; Vardy is joint second in the race for the Golden Boot even though 36 players average more shots per game. Despite turning 34 in a fortnight, Vardy has failed to start only four Premier League games in 2020, including Monday’s quick turnaround to face Palace. Edinson Cavani is a month younger yet the way people talk about the Uruguayan suggests he’s fit for nothing more than the occasional cameo, which puts Vardy’s impressive longevity into even sharper focus.

9) Dominic Calvert-Lewin
This year, Everton found the centre-forward they have spent far too long looking for and he was hiding in plain sight all along. Calvert-Lewin just needed Carlo Ancelotti to unlock his potential and once Everton turned to the Italian, the centre-forward was in business. After scoring 16 goals in 96 Premier League appearances pre-Ancelotti, Calvert-Lewin has notched 19 times in 35 since Everton appointed the serial winner a year ago. Within days of working with the Toffees, Ancelotti had sussed his potential: “He works hard, really hard, but he has to be focussed more on not moving too much outside into wide positions,” the manager said in January. “He has to stay close to the box because there he is really dangerous. He can play for England, no doubts.” Which is exactly what Calvert-Lewin achieved in October, since when he has netted twice in three caps.

5 – Dominic Calvert-Lewin is the first player to score in each of @Everton‘s first five league games of a season since Tommy Lawton in 1938-39. Leap. #EVELIV

8) Emiliano Martinez
This is a very forward-heavy list, which tends to be the case even in years when the art of defending hasn’t been so woefully forgotten. But we’re an inclusive lot here and the stoppers demand some form of representation. So Martinez sits snugly among many of the strikers whose 2020 may have been even more productive were it not for the Aston Villa keeper. Martinez began the year as he did the previous eight, as an Arsenal employee, and though Bernd Leno hasn’t done a whole lot wrong, the suspicion among many Gooners remains that the club sold the wrong keeper when Mikel Arteta had to choose in the summer. After years of stand-in service, Martinez needed game time and his stint in the Gunners sticks after lockdown – which culminated with an FA Cup winner’s medal – was evidence that he warranted more responsibility. Dean Smith, in dire need of a keeper with Tom Heaton absent, was only too willing to offer it and Villa haven’t looked back. Martinez has played a key role in making Villa’s defence the most improved unit of 2020.

7) Harry Kane
The Tottenham star managed only 75 minutes in 2020 prior to Project Restart but Kane has spent the second half of the year making up for lost time. He scored seven goals in nine games to close out last season before returning for the new campaign almost a new man. Having spent his career thus far as a goal poacher, a classic No.9, Jose Mourinho repackaged Kane as a provider, with the England star dropping deeper to play as a link man between Tottenham’s midfield and the runners flying past him. In the opening 12 games of the season, Kane scored nine and laid on another 10, mostly for Son Heung-min. No player has ever reached double figures for assists in a season so quickly. It is hardly a coincidence that in the past three games – when Kane has failed to create or score a goal – Spurs have failed to win.

6) Son Heung-min
You can’t include Kane in this list without Son, such has been their reliance on one another. Their incredible partnership has got people talking about something else which prior to 2020 didn’t exist: goal combinations. The Spurs duo are now within four of Drogpard’s record, which really wasn’t a thing prior to Kane and Son emerging as Europe’s best double act. On his own, Son is currently operating at one goal contribution a game having finished last season with 24 in 30 matches. And to think we thought he’d be on Jose’s sh*t list.

5) Mo Salah
There seems to be something brewing around Salah but, as Klopp says, the Liverpool star is ‘in a good moment” – he is currently two clear in the race for the Golden Boot – and his wider numbers make it impossible to omit him from this list, despite other team-mates vying for inclusion. Salah has had a hand in as many Premier League goals as the no.1 here and no one has scored more in the league in 2020. Only Cristiano Ronaldo, Robert Lewandowski and Ciro Immobile in Europe’s top five leagues have hit the net more often this year.

4) Kevin De Bruyne
Liverpool romped home in the title race last term, with four of their stars making up two-thirds of the shortlist for the PFA Player of the Year. Yet it was De Bruyne who took home the gong, which sits on the mantelpiece alongside his Premier League Player of the Season award. His 20 assists last season equalled Thierry Henry’s 17-year record while 13 goals scored represented his best return. His seven assists in 13 games this campaign put him on course to match last season’s tally, in a side which has struggled to match their talisman’s form. De Bruyne’s consistency has almost normalised his brilliance. So good has he been for a couple of seasons now that we expect this continued ridiculousness. Messi or no Messi – De Bruyne isn’t arsed either way – City need to get the Belgian’s scribble on that contract sharpish.

Kevin De Bruyne is the first Man City player to be named PFA Men’s Player of the Year:

3) Sadio Mane
Last year’s winner. You could make a case for Liverpool representatives to make up half of this list – four of their players made the 11-man shortlist for the FIFA Best Award – and Mane’s placing as the highest-ranking Red here illustrates the year he has had and how pivotal he is to Jurgen Klopp’s machine. “Becoming a very good player to a word-class player, no doubt about that,” said Klopp in the summer while reflecting upon the Senegal star’s progress, and though you might reasonably argue that he reached the world-class category prior to this year, his performances for the defending champions and leaders have cemented that status. That ascent has no doubt been helped by his rivalry – a healthy one, apparently – with Salah, and Mane has emerged as the Reds’ most important player this year. This season, in the six games Mane hasn’t started, Liverpool have won only two. On Sunday, the forward ended what was by his standards a goal drought, not that Klopp was worried: “One of our best players in the world hasn’t scored for a while, who cares? Difficult to defend, if Sadio has the ball you need two or three on him.”

2) Jack Grealish
No player has had a more eventful 2020. The Aston Villa captain almost single-handedly kept his boyhood club in the Premier League after the restart, which came after Grealish had been involved in a car crash during lockdown which resulted in a nine-month driving ban last week. In between that mis-step and his day in court, Grealish made a belated England debut amid some astonishing form for Villa, which has turned Dean Smith’s side from relegation fodder into top six contenders. That isn’t entirely down to Grealish. While he was signing a new contract in the summer, Smith was busy recruiting better players to surround his talisman, which has worked a treat. The likes of Ollie Watkins and Ross Barkley have helped Grealish to shine even brighter, but the 25-year-old has stepped up another level to elevate him to the level of the Premier League’s finest talents.

38 – Jack Grealish has created 38 chances from open play in the Premier League this season, the most of any player in any of Europe's big-five leagues in 2020-21. Catalyst. pic.twitter.com/6FF8dtitQ2