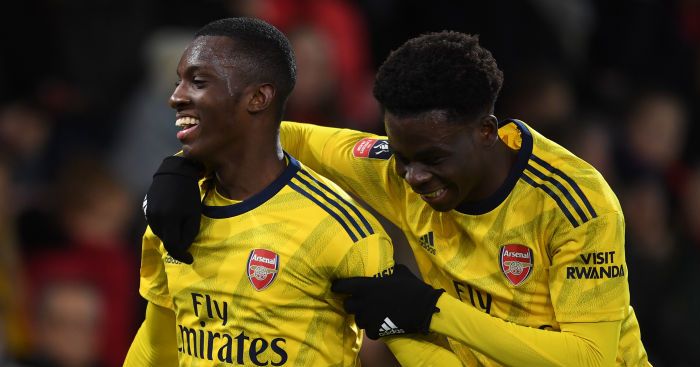 You know you have entered a new phase of your football career when your name is being used to sell nonsense line-ups about nonsense transfers that will never happen; Traore has picked up some truly incredible speed to enter that phase as months of no football has led to story upon story about various clubs looking at ‘alternatives’ to Jadon Sancho (until Manchester United realised that they have already bought Daniel James).

What does that hype do to us? It makes us want to watch him again – properly – to see whether he really is “unplayable” (Jurgen Klopp’s word) or whether he is just very, very fast. Or whether the latter basically makes him the former.

9) Wilfred Ndidi (Leicester City)
Because football is not all about acceleration or side-steps or sumptuous passes or stunning goals. Application is sexy. Diligence is sexy. And my word, this is one man who applies himself diligently. Talk of Ndidi being available for just £36m is all of the ridiculous as there are few players in world football who excel so consistently in a defensive midfield role. And with absolutely no fuss whatsoever.

Leicester missed him – they had lost only to Liverpool, Manchester City and Manchester United before his knee injury and then promptly fell to Southampton, Burnley and bloody Norwich without him – and we missed him too. In all honesty, James Maddison leaves us a tad cold (all fart and no poo) but Ndidi? Yes please. There’s a pun in there somewhere…

Most tackles won by Premier League midfielders in the past five leagues:

Wilfred Ndidi has the tackle charts on lockdown. 🔒 pic.twitter.com/cRZFwbV102

8) Kevin De Bruyne (Manchester City)
Because he is the finest individual footballer in the Premier League and we are not bound by any tribal blindness to ignore his excellence in favour of carefully curated statistics. We are free to simply watch him and enjoy. The vision, the intelligence, the underrated skill of a perfectly timed run or placed pass, the needle just below the surface. Bring it all the f*** on.

7) Eddie Nketiah (Arsenal)
At the other end of the scale to the near-guaranteed brilliance of De Bruyne comes the uncertainty of youth in the form of a 21-year-old striker who has played barely a handful of games at this level. Three goals in seven matches for the Gunners this season suggests that they may be harbouring a potential match-winner. Just look at that touch…

Nketiah is criminally underrated. What a cross from Saka and the finish from Eddie is sublime – he doesn’t get the attention he deserves. pic.twitter.com/K47yOjA2ke

Pierre-Emerick Aubameyang might be an elite goalscorer but let’s face it, watching an elite goalscorer is not the greatest amount of fun for the neutral. The real giddy comes from a will he-won’t he potential goalscorer emerging from the academy of a club; will this end in Michael Owen or Neil Mellor? At Real Madrid or Preston? We are never quite sure which we would prefer.

6) Billy Gilmour (Chelsea)
One man/boy who must be cursing football’s hiatus is the 19-year-old Scot who had just made the sixth and seventh appearances of his Chelsea career and was seriously brilliant against Liverpool in the FA Cup and then against Everton in the Premier League. He is the very realest of deals. He is the most dead of certs.

What happens in the next few weeks could decide whether any of Chelsea’s rainy-day fund is spent on midfielders, or even whether the pot could be boosted by the sale of N’Golo Kante or Jorginho. Gilmour could be that good. But first we must see – and enjoy – how he performs when he has had three months to ponder his new reality. It might have been a whole lot easier back in March when few outside of Scotland or west London knew his name.

5) Harvey Elliott (Liverpool)
As we said last week: ‘Liverpool’s reluctance to spend is already clear, thus their developing talents must become more than extra numbers in training-ground drills or seats on the bench. Curtis Jones and Harvey Elliott have 20 Premier League minutes between them this season. It cannot hurt to show the next Steven Gerrard and Sergio Ramos’s best mate that the first-team pathway really is clear to those good enough.’

As soon as the title is won, there is no excuse whatsoever not to give more minutes to Jones but particularly Elliott, who can help make Liverpool’s case for a dry-ish summer by bringing his own shade. In all honesty, we are fed up of admiring this great Liverpool side and we want to see new blood. He’s just 17 and you know what we mean. Give us a glimpse, Jurgen. This is your greatest challenge yet.

4) John McGinn (Aston Villa)
“There is no doubt they missed John McGinn after he fractured his ankle,” said Graeme Souness this weekend and that has become something of a received truth that ignores the fact that the Scot got injured in the middle of a fourth consecutive defeat for Villa in December. The idea that McGinn and Jack Grealish were forming some kind of dynamic, all-conquering partnership before they were cruelly parted is a little wide of the mark. In truth, Villa are pretty sh*t with or without McGinn.

But that does not mean we are not keen to be proved wrong, to discover if this is a midfield that has earned the admiring glances of much bigger clubs. Is Grealish really worthy of a £75m move to Manchester United? Is McGinn anywhere close to the same? Or is their coronation more about nationality than most would care to admit? It’s hard to argue that the engine is faultless if the car keeps stalling.

3) Marcus Rashford (Manchester United)
It’s important to remember that as well as being the greatest human being of 2020, Marcus Rashford began the year in pretty fine fettle as a footballer, scoring his 13th and 14th Premier League goals against Norwich before succumbing to injury. Manchester United have barely missed him – they have a new hero – but absence (and altruism) has made the heart grow fonder and we now wish him nothing but truly fantastic things.

Never mind whether Paul Pogba and Bruno Fernandes can dovetail, we are yet to see the Portuguese play alongside Rashford; it’s easy to forget that the great 2-0 win over Manchester City before the pause was achieved with a team featuring Daniel James and Anthony Martial as a front pairing. This a United team that could get far, far better and that evolution continues with Rashford stationed slightly left of centre.

2) Son Heung-min (Tottenham)
Harry Kane, Schmarry Kane. Only a fool gets giddy about an elite goalscorer for a team that’s not their own; that’s like trainspotters who note down the numbers of express trains and ignore the steam engines. There’s no fun in collecting goals if the goals are not being scored in your colours. So we will save our excitement about Kane’s return for when he is wearing an England shirt. It’s all about Son for us. It’s all about the exuberance and sheer quality of a great footballer who would be playing for a far bigger club if he wore different national team colours. If Manchester United had any sense….

1) Paul Pogba (Manchester United)
Oh hello. We might well be alone in believing that the best Manchester United still includes Paul Pogba but nobody can deny that this is a fascinating narrative – the club and player who really have lost faith in each other but could now be kept together by a combination of pandemic and promises.

Which Pogba will emerge on Friday night and beyond? One of the most dynamic and irresistible midfielders in world football or the man who really cannot be arsed? Logic says that he should be buoyed by Bruno Fernandes and buoyed by the form of United and the very clear challenge that lies ahead. But Pogba and logic are sometimes uneasy bedfellows.