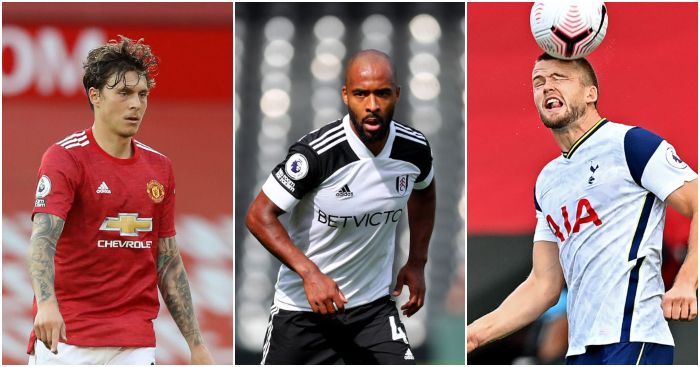 With less than two weeks left before the transfer window closes, these players must surely be improved upon. Kepa has sealed his fate.

10) Yerry Mina
The midweek confirmation from Carlo Ancelotti that “we are looking for a centre-back” was followed by what the manager described as an “average” performance from Yerry Mina against West Brom. Everton’s desire to reinforce is owed to injuries but there must be a temptation to at least wound two warm-blooded egg-laying vertebrates with a single concretion of earthy or mineral matter in this transfer window.

“I think he could be more aggressive and do more with the ball,” Ancelotti added before discarding the stick in favour of a far smaller carrot: “But he did really well against Tottenham.”

Everton have already shown their propensity for ruthlessly upgrading one position, completely transforming a meandering midfield over a matter of weeks. The five-year contract Michael Keane signed in August solidifies his first-team place in a way Mina’s continued fitness problems and similar lack of mobility cannot.

We really need a centre back in now ideally to start alongside Keane or to at least cover for Mina and Keane. I reckon we will get in Tomori but I would definitely take John Stones back either on loan or on a permanent if it wasn’t silly money. Carlo would teach him to defend!

9) Aaron Cresswell
Mark Noble is the only player to ever start more Premier League games for West Ham. Ludicrous.

8) Eric Dier
There is certainly room for Eric Dier in a Premier League squad, but his half-decade role as a regular starter for Tottenham is now worth questioning. As much as his versatility and attitude might spare him the Dele Alli treatment, his lack of top-level quality in any of the positions he plays should eventually see him phased out.

Dier’s inability to cancel the impromptu flight of Dominic Calvert-Lewin on the opening weekend was compounded by his incredibly slow reaction to a clever Danny Ings run and finish against Southampton. Whether in the air or on the ground, he often feels like a weakness worth targeting.

Though not entirely culpable for either goal, he has been the one common denominator in two uncertain games at central defence for Tottenham thus far, finding a suitable partner in neither Toby Alderweireld nor Davinson Sanchez. Maybe it’s him, not them. Although it’s also them. But mainly him.

7) David McGoldrick
As the only team in Premier League history to finish in the top half with a leading scorer on six goals or fewer, Sheffield United’s area of supposed weakness is not difficult to identify. Oli McBurnie, Lys Mousset, Billy Sharp and David McGoldrick combined for 18 strikes between them in 2019/20; seven players managed at least as many alone.

It is never quite as simple as dropping a more natural finisher into the team. The Blades have a particular system that places different demands on their forwards. But industry will only go so far and scoring at a rate of just over a goal a game places undue pressure on the defence to perform to a higher standard. McGoldrick is popular with the manager, teammates and fans for a reason but last season and so far this has returned two goals in 25 starts; his is surely a role someone else can fulfil without sacrificing that threat.

6) Benjamin Mendy
Manchester City won the 2017/18 Premier League title at a canter with Fabian Delph at left-back for 20 games, and retained the 2018/19 crown by the hair of a gnat’s gentleman despite Oleksandr Zinchenko starting more matches – 14 – than anyone in the position. Finally blessed with a fit and available specialist for much of last season, Pep Guardiola could not have been much further off the pace if he actively tried.

The fear for Benjamin Mendy is that his ostensible recovery from a long-term knee injury will have obvious and understandably lasting physical and mental repercussions. There was no guarantee he would return as the same player that thrilled for Monaco and initially at the Etihad Stadium. The 26-year-old has never started more than four consecutive games for the club in all competitions, and perhaps never will.

5) Andy Carroll
The idea that Andy Carroll would be playing in the Premier League at the age of 31 is not particularly preposterous. But his status as an apparent regular starter for a team that spent the summer dreaming of Edinson Cavani and Kylian Mbappe is. Newcastle have somehow contrived to compose a forward line worth more than £100m while simultaneously continuing to rely on a free agent employed on what essentially amounts to a rolling yearly contract.

There will be times when it seemingly works, as against West Ham on the opening weekend. But despite the annual protestations of every top-flight club, teams can only play West Ham twice. When the approach of aiming for Carroll’s chest and feeding off the scraps is used against anyone with an idea of their own – say, Brighton – it is open to ending in an unceremonious half-time substitution. Those elbows need a rest more often than you think.

That first half has surely put the Andy Carroll argument to bed. Offers nothing, can’t run, doesn’t win any headers, and his hairstyle is awful. #NUFC

4) Callum Robinson
Only three clubs have ever conceded more goals in their first two fixtures of a Premier League season than Slaven Bilic’s iteration of West Brom. There is a case for any or all of that defence not being up to the requisite standard – Branislav Ivanovic will definitely address those myriad problems by himself – but a) it seems harsh to pinpoint one member, and b) that somewhat masks how weak their centre-forward options are.

Grady Diangana and Matheus Pereira are wonderful players either side but Callum Robinson, Charlie Austin and Hal Robson-Kanu are unedifying choices for the filling. They have 47 top-flight career goals between them in 204 combined appearances, Austin’s anomalous 2014/15 for a QPR side that finished bottom accounting for more than a third of that total. Robinson managing one shot in 150 minutes for a team inclined more towards attacking does not bode well.

3) Victor Lindelof
This is not a new problem. It wasn’t particularly revolutionary to suggest Manchester United should be targeting a centre-half ahead of a right-winger in July. Ole Gunnar Solskjaer, Jose Mourinho and Louis van Gaal have signed five players between them in that position over the past six years, yet those familiar problems persist.

Victor Lindelof would be a solid back-up or rotational alternative but there are at least two dozen more solid, reliable, rounded central defenders in the division. In his last seven starts alone, his deficiencies in the air and on the ground have been ruthlessly exposed by Wilfried Zaha, Luuk de Jong, Olivier Giroud and Michael Obafemi. Anyone pretending that is good enough is kidding themselves.

2) Denis Odoi
Fulham kept the sixth-worst defensive record in 20-tea, Premier League history by conceding 81 goals in 2018/19. The four players that started the most games at the back were Denis Odoi (29), Joe Bryan (27), Tim Ream (25) and Maxime Le Marchand (25). Three-quarters of that ensemble struggled against Arsenal; half of it fared even worse at Leeds.

From Odoi-Hector-Ream-Bryan to Tete-Hector-Odoi-Bryan, and three goals allowed to four shipped, the issue at Fulham is obvious. Signing a two-year contract extension after the first game at the age of 32 makes Odoi simultaneously the safest yet most susceptible to an upgrade. But is that fella from Emmerdale really the answer?

1) Kepa Arrizabalaga
He is not the worst signing in Chelsea – nor football – history. Kepa has won a Europa League at Stamford Bridge and kept 22 clean sheets in 71 appearances to the dependable Rui Patricio’s 21 in 77 games. That world-record fee for a goalkeeper has not helped but executives negotiating typically extortionate release clauses decided that, not a 25-year-old still making a transition better players have struggled with before him.

Kepa is almost certainly done at Chelsea, at least as a regular starter for the immediate future. Loris Karius and Claudio Bravo will welcome him into their support group. Edouard Mendy will usurp the Spaniard and prove whether the issues are down to the individual or a defensive structure that lends itself to goalkeeping mistakes and crises of confidence. Kepa can have few complaints, yet plenty of sympathy.