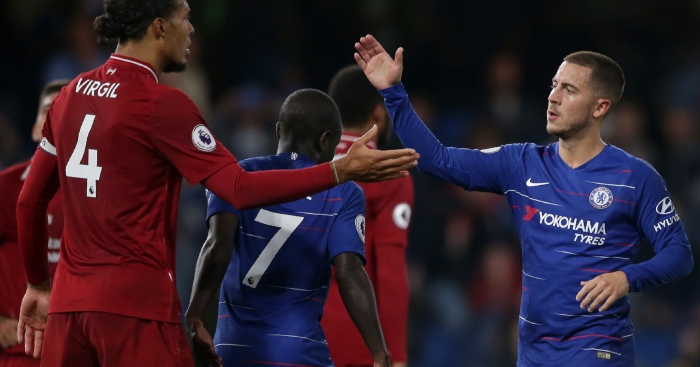 10) Harry Maguire (Leicester)
The Leicester defender’s profile grew exponentially after the World Cup, where he showed that he is far more than a stopper possessing a head with its own gravitational pull. The 25-year-old’s grounding at Barnsley, Sheffield United and Hull means he can certainly do the dirty work, but Maguire has also proved to be one of the most comfortable centre-backs in possession.

Ed Woodward reckoned he wasn’t any better than Chris Smalling, Phil Jones and Eric Bailly, but the rest of us know the score. Leicester seemed to be preparing to lose Maguire in summer, when they bought three other centre-backs, and the Foxes have not suffered in his injury-enforced absence in recent weeks. It’s been a stunning rise through 2018; a big move must be in the offing in 2019.

9) Jordan Pickford (Everton)
The end of the Everton keeper’s 2018 is in no way a reflection of his year as a whole. Pickford felt the need to apologise to Toffees fans after his mistake at the end of the Merseyside derby but the England stopper has plenty of credit in the bank. He finished his first season at Goodison Park with the club’s Player of the Year award and his form was impressive enough to earn Pickford the England No.1 shirt, despite only making his debut at the back end of last year. His second cap came in March.

After the World Cup and Nations League success, Pickford is Gareth Southgate’s undisputed first choice, while Everton could easily double their £30million investment if they were open to offers. Technically, Pickford has got it all, even if he lacks Thibaut Courtois’ Mr Tickle arms. If he can cut down on the chaos, then Pickford could be England’s keeper for the next decade.

8) N’Golo Kante (Chelsea)
France’s best midfielder has had quite the year. Kante has won the FA Cup, World Cup and Chelsea’s Player of the Year award. But still his position wasn’t safe.

Maurizio Sarri brought Jorginho with him from Napoli, which meant shifting Kante from his usual post in front of the back four/five to the right side. Chelsea’s results under Sarri make it difficult to build a convincing argument against the move but it still feels a bit like asking Diego Maradona to do a job at left-back. He’d do it, and he would probably have been brilliant, but it’s difficult to score goals with your hand from left-back.

We tried to paint it as one of the mistakes of the season, which was a tough sell a couple of days after Kante scored the opener to sink the champions.

7) Harry Kane (Tottenham)
The Tottenham striker is guaranteed to make this list for each year he simply maintains his previous standards. But Kane has raised the bar again for himself with a 2018 that has lifted the England captain into the upper echelons of the world game beyond the Premier League.

Kane cracked 30 league goals for the first time last season, the fourth successive campaign he scored 20-plus. He was only two off Salah’s ridiculous pace but Kane’s haul raised fewer eyebrows simply because such prolific form is what we have come to expect from the 25-year-old. Even winning the Golden Boot at the World Cup wasn’t enough for some critics who bemoaned the fact Kane didn’t score beyond the first knockout round and that half of his six-goal haul came from the penalty spot. Some people are never happy.

Kane has been linked with Real Madrid and Barcelona and it seems most likely that European clubs of such stature would be the only suitors to tempt him away from Spurs. Surely a massive offer from Real is incoming.

6) Pierre-Emerick Aubameyang (Arsenal)
New recruits often take their time to acclimatise to the Premier League but Aubameyang looked at home immediately upon joining an Arsenal side kicking their heels until Arsene Wenger was gone. Despite playing 503 minutes fewer than Kane in 2018, the £56million striker has scored only one less Premier League goal than the Tottenham star, hitting 20 from 56 shots compared to Kane’s 21 from 94.

All this despite being shifted around the Arsenal forward line while Unai Emery decides on the most potent structure of his attack. Aubameyang would prefer to play centrally but the Gabon striker has scored half of his ten goals from the left wing, with only Mo Salah managing to keep pace with him so far in the race for the Golden Boot.

5) David Silva (Man City)
“How did I cope with that?” pondered the Man City midfielder when he reflected on the last 12 months in an interview with the Telegraph. Silva spent much of 2018 flying back and forth to be with his prematurely-born son in hospital in Valencia, where his mind remained even when he was back in Manchester doing David Silva things in City’s attack.

Despite not eating, sleeping or training properly, Silva’s standards never slipped on the pitch. The Premier League’s most-admired player still created more chances overall for Man City than any of his team-mates. In terms of creating chances from open play, only Eden Hazard, Mo Salah and Raheem Sterling have been more productive and all have played at least 314 minutes more. Despite the toughest year of his life, Merlin has still been f*cking magic.

4) Raheem Sterling (Man City)
Sterling has had a lot to cope with this year, what with the racism and Juan Mata wagging a disappointed finger in his face. Despite all that, let’s reflect on what the City star has achieved in 2018: a Premier League title in the bag; a pivotal role in England’s World Cup success; and a new five-year contract with the country’s best side.

Sterling has become a complete attacker for Pep Guardiola. The 24-year-old has recorded more Premier League assists than anyone else in 2018 while creating more chances from open play than anyone not called Eden Hazard. Sterling finished last season on 23 goals in 46 games – a tally better than double his previous best. With nine goals already this season, he is on course to at least match his Premier League haul.

3) Mo Salah (Liverpool)
The Liverpool star scored 15 goals in 15 games after the New Year to secure the Golden Boot award, while his hat-trick at Bournemouth puts him level with Aubameyang in the race for this year’s award, despite what is widely considered to be a slow start to the season. Only three strikers in Europe have scored more goals this year. Basically, he’s been f*cking brilliant.

He has mitigation for that supposedly slow start too. Like many other players, Salah returned for the new season after spending his summer at the World Cup, but few others had to carry the weight of expectation of a nation on his shoulders, one of which was knacked in the Champions League final. Jurgen Klopp has also been experimenting with new formations in a bid to solidify his defence, which has meant a variety of roles for Salah. But the Liverpool manager says Salah has clicked again and he’s back. The evidence in the last week suggests the manager is right.

2) Eden Hazard (Chelsea)
At least the Chelsea star gave us a year to remember before he inevitably departs for Real Madrid next summer. Like Cristiano Ronaldo, the Premier League will miss him when he goes.

Chelsea certainly will. In the absence of any help, Hazard has led their attacking threat almost single-handedly since Antonio Conte got shot of Diego Costa. The Belgium star has scored more than double the number of Premier League goals than any team-mate while also providing the greatest creative threat. In between having his legs shredded to ribbons by opposing defenders, Hazard has laid on 84 chances from open play – a staggering 31 more than any other Premier League player in 2018.

1. Virgil van Dijk (Liverpool)
But you already knew that.