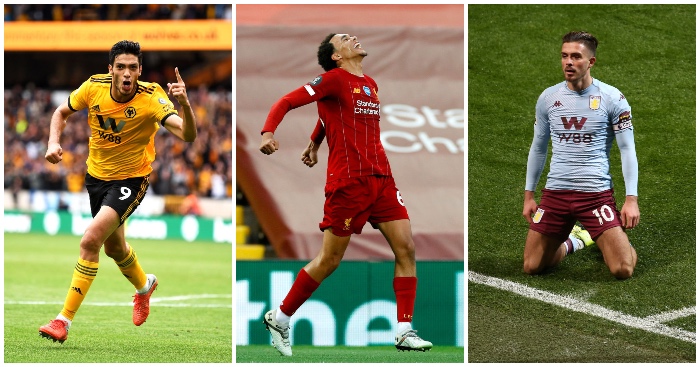 Four Liverpool stars make our top ten, but not one London-based player.

10) Jordan Henderson (Liverpool)
Jordan Henderson being selected as the Football Writers’ Association’s Player of the Year led to predictable hysteria and uproar among the football masses. How dare they choose the captain of a brilliant title-winning side and the figurehead of the #PlayersTogether initiative – he’s nowhere near as good as Kevin de Bruyne, is he?

Well, no, in terms of pure footballing skill, he isn’t. But they are entitled to their opinion; it wasn’t a left-field choice. It’s very noticeable when he’s not playing – his teammates relax too much. They know any earful they receive will come from the German taskmaster way over there on the touchline rather than from his English lackey spitting feathers yards away from them. He is the front man of Liverpool’s heavy metal band, Bruce Dickinson screaming lyrics in Klopp’s Iron Maiden. Liverpool simply would not have won the title without him.

9) Jamie Vardy (Leicester)
He’s 33 years old, but harasses, niggles and irks Premier League defenders like a striker two-thirds his age; he’s a savvy whippersnapper; an experienced squirt. Vardy has his hands on the Premier League Golden Boot – scant consolation as Leicester missed out on Champions League qualification on the final day, but a brilliant achievement all the same. The old rascal.

8) Raul Jimenez (Wolves)
Raul Jimenez has been the greatest leader of any attack in the Premier League this season. He has started 37 of Wolves’ 38 games this season, scoring 17 goals and providing six assists. His movement off the ball is second to none and his work-rate is phenomenal; his finishing is astonishing in its accuracy, variety and beauty. His partnership with Adama Traore is one that no-one – except fans of clubs vying for either player’s signature – wants to see broken.

The studio discuss Raúl Jiménez’s stunning volley vs Burnley and his hot goalscoring form over the last two seasons…@rioferdy5 certainly wouldn’t mind seeing him in a United shirt… 👀 pic.twitter.com/qGfzTXrUM6

7) Sadio Mane (Liverpool)
Another consistently brilliant campaign for Sadio Mane. In an Eden Hazard-less Premier League, there is no-one better at slowing defenders down before making them look stupid, and he remains the biggest threat running in behind any defence. There are plenty of players as quick as Mane, but it’s the combination of that pace with the speed of thought, timing of runs and reading of the play that puts him head and shoulders above the rest.

6) Jack Grealish (Aston Villa)
Aston Villa would have been down by Christmas without Jack Grealish. The statistics are remarkable. He scored the most goals for Villa (8), provided the most assists (6), completed the most dribbles per 90 (2), and was somehow the most creative passer of the ball (2.5 key passes per 90) and the most accurate (85% pass completion). He is a supremely talented footballer with an outstanding attitude and needs to be playing Champions League football. Villa will be utterly screwed without him.

5) Bruno Fernandes (Manchester United)
We should really use Bruno Fernandes’ arrival at Old Trafford to split United’s season, just as we use the birth of Jesus Christ in our calendar. Before Fernandes (BF) to recall the sh*tshow before he arrived and Anno Domini (AD) to denote the period afterwards – it means “in the year of the Lord” anyway, so that works perfectly.

BF, United were 14 points behind Leicester with 34 points from 24 games, and had scored 36 goals in the process. In the 14 games AD they’ve picked up a further 32 points, haven’t lost a game and have scored a further 30 goals; Fernandes has either scored or assisted half of those. If you take United’s points-per-game ratio BF and stretch it over the season, they would have finished on 54 points in ninth place. By the same method, using the period AD, they would have 87 points in second.

This is of course far from a hard and fast way to measure an individual player’s influence on a team, and United fans will rightly point to the improvement in Anthony Martial and the emergence of Mason Greenwood as further factors in their incredible upturn in form. But we can’t know whether those improvements would have happened had their saviour not arrived in January. It’s not quite water into wine, but it might just be water into shandy.

4) Danny Ings (Southampton)
He fell one goal short of Jamie Vardy in the race for the Golden Boot, but he was the most prolific of any striker in the top ten, scoring a goal every 128 minutes. He was consistently finding the net in the midst of the dark days of October and November as well as in the bright new dawn that followed. He puts defenders under pressure, initiates the Southampton press, his awareness of teammates and opposition players is superb, and he can finish from anywhere by almost any means. He’s Shane Long without the yips.

3) Virgil van Dijk (Liverpool)
This freak has started and finished the last 89 Premier League games for Liverpool. In that time they’ve kept 42 clean sheets and he’s picked up just three yellow cards. Again, the guy is a freak. Van Dijk was dribbled past on at least one occasion this season and his mistake against Arsenal did provide a crumb of evidence to those claiming he wasn’t anthropomorphised by Victor Frankenstein. We’ll need more convincing than that.

It’s almost unfair how well the start of his career has gone – aren’t footballers supposed to suffer at least a little bit? He’s got a golf bag of a right foot, such is the variety of trajectories and speeds of his delivery from wide areas, and there is now no-one more dangerous over a free-kick in the Premier League. He thrives under pressure and seems to add different qualities to his armoury on an almost match-by-match basis – the improvement is just as frightening as his natural talent. Liverpool and England have got the best right-back in the world, and he truly has made the position sexy again.

This view of Trent Alexander-Arnold’s free-kick against Chelsea is simply beautiful. 😍🔥

1) Kevin De Bruyne (Manchester City)
De Bruyne’s record-equalling 20th assist of the season was sandwiched between two stunning goals on Sunday, taking his goal involvement tally to 33 for the season – that’s a goal or an assist every 84 minutes. If you were to build the perfect Premier League midfielder it would be Kevin De Bruyne: quick with the ball and without; incredible vision; a great work ethic; powerful; competitive; a perfect touch; a stunning range and accuracy whether passing or shooting.

His weaker left foot is better than most other players’, whether they favour that side or not; his right is literally the best around. He is the baby-faced sniper with a foot like a traction engine.