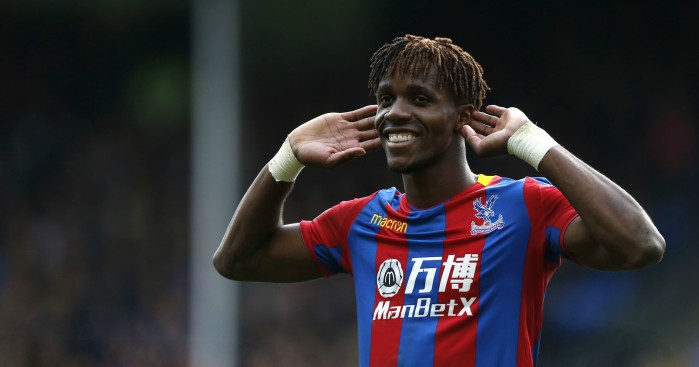 To clarify, this is a list of the top ten Premier League players outside the top six this season. Now, proceed to the comments section, you angry bear.

10. Mario Lemina
Twelve Premier League clubs broke their transfer record in the summer. Liverpool agreed a deal to sign Naby Keita next year, while the add-ons involved in Davinson Sanchez’s move will eventually take him past Moussa Sissoko as Tottenham’s most expensive signing ever, bringing the overall number to 14.

Most would recall Alvaro Morata setting Chelsea’s new benchmark, Alexandre Lacazette surpassing Mesut Ozil for Arsenal and Everton throwing money first at Sunderland then Swansea for Jordan Pickford and Gylfi Sigurdsson. As easy as it is to forget that Swansea broke their record to sign Sam Clucas, one can be forgiven for letting Southampton’s £18million deal for Mario Lemina slip the mind.

The 24-year-old has wasted little time in settling into the Premier League after taking the brave step of leaving Juventus. He has featured in just two of their five defeats in all competitions, but has played in each of their four wins. Mauricio Pellegrino will have been as impressed as we were by Pierre-Emile Højbjerg’s display against Everton, but the Dane is battling for one central midfield space against Oriol Romeu; Lemina has the other nailed down. The only non-defender of Southampton’s four summer signings has already established himself as a class above.

9. Steven Defour
A player once courted by Manchester United would have expected a kinder Premier League welcome, but Steven Defour will not pretend that his first season in England went to plan. A club-record signing for Burnley in summer 2016, the midfielder started just 16 league games and failed to finish 90 minutes once.

The Belgian was edging towards the exit door after 12 months, but his resurgence has seen him play perhaps as important a part as any other player in Burnley’s own transformation. He has started every Premier League game for Sean Dyche’s side this campaign.

“It was a bit of a blow because we didn’t deserve to lose,” said the midfielder on Sunday, adding that Arsenal “were a bit surprised we played football”. Few players are as responsible as Defour for the sudden outbreak of passing and moving at Turf Moor, and it is perhaps no coincidence that their resolve was finally broken at the weekend only after he was substituted.

Absolutely love the way @StevenDefour has worked so hard and played brilliantly this season. A massive part of the success so far.

8. Abdoulaye Doucoure
The treasure unearthed by Marco Silva. Watford signed three central midfielders in the summer, but a player purchased by Quique Sanchez Flores and who initially stalled under Walter Mazzarri has been their only ever-present this season. Abdoulaye Doucoure has not missed a single Premier League minute for the Hornets on their march into the top half, and the 24-year-old has established himself as one of the most underrated players in the division.

The only midfielder to score four Premier League goals or more this season, Doucoure has infused steel with style at the heart of an overperforming side. But it would be a mistake to consider his success a one-off, for his remarkable improvement began under Mazzarri at the turn of the year. There is a reason Silva believes he can “play at the next level”, and a reason clubs on said next level are circling.

Of the six league games Merino has started this season, Newcastle have won three, drawn one and lost two, both by scorelines of 1-0; they have scored seven goals and conceded four. Of the seven league games Merino has not started this season, Newcastle have won one, drawn one and lost five, scoring four and conceding 13. That sole victory came against Crystal Palace in October – when Merino scored as a second-half substitute.

Jamaal Lascelles is the inspirational captain, but there is an argument that Merino is the man Rafael Benitez has built this team around. Removing this brick causes the whole building to collapse, but placing it back should help restore form.

6. Christopher Schindler
Five Premier League players outrank the Huddersfield centre-half for tackles (39) this season, six boast more interceptions (26), and only three have made more clearances (96). Schindler’s list really is rather impressive. He is, predictably, the only player to rank in the top ten for all three metrics after 13 matches.

Huddersfield as a unit deserve praise for almost stopping the Manchester City freight train in its tracks, but Schindler was the star. It was his deft touch that forced Nicolas Otamendi to concede an own goal, his tackle that thwarted Sergio Aguero when he was played through on goal in the first half, and his determination and resolve that pushed City to their attacking limits. That the Terriers’ worst collective performance of the season came during his one-match suspension against Bournemouth was no happenstance.

Christopher Schindler is genuinely the most underrated player in the premier league and that's not me being biased. He's absolutely exceptional.

5. Pascal Gross
Bargain of the summer? Pascal Gross, without a doubt. And perhaps even that is underplaying Brighton’s business, for there have been few signings, expensive or cheap, who have been more effective, particularly in their first season in a foreign league. He has created more than twice as many chances as any other Brighton player this campaign, and has scored or assisted eight goals – Glenn Murray (4) is his closest teammate in that regard.

Brighton signed eight first-team players in the summer; five were more expensive than Gross, and the other two were loans. Chris Hughton has signed a bona fide provider, a 26-year-old with fewer assists than only David Silva, Kevin de Bruyne and Leroy Sane this season, for £2.5m. That no other sides were in for him truly is Gross negligence.

Vardy’s goalscoring exploits this season fit neatly between his previous two campaigns: not brilliant, not terrible, but great. He has the most goals of any player outside the top six (6), and has scored over one-third of Leicester’s 17 league goals this season. The forward turns 31 in January, yet he remains as important as ever to his club, and surely has a seat booked on the plane to Russia next summer. For England. Not just for a random holiday.

3. Aaron Mooy
Adam Bhana will not make a habit of his kind gesture from October. The young Huddersfield fan hit the headlines when he found a £5 note outside the John Smith’s Stadium and returned it to the club, stating that it was a reward for Aaron Mooy as he had “played very well”. Few children could afford such generous match-based bonuses for a player who makes “playing very well” look a little too simple.

If the statistics above prove that Schindler is Huddersfield’s rock at the back, Mooy has a similar list illustrating his importance going forward. He ranks joint-first in the club for goals, joint-first for assists, first for tackles, first for passes and first for touches. He has created more than twice as many chances as any teammate, and is the only Huddersfield player to have both scored and assisted in the Premier League. He is the absolute Mooy.

2. Wilfried Zaha
The maths is pretty straightforward. In six matches without Wilfried Zaha this season, Crystal Palace did not score a single goal, nor did they win a single point. In seven games with their most influential player, they have scored eight goals and picked up eight points. They have a fighting chance of survival with the 25-year-old fit and available, but might as well throw the towel in without him.

For a player whose maturity and attitude has been constantly questioned ever since he departed Selhurst Park for the first time in 2013, Zaha has risen to the challenge of a Premier League relegation battle with a stronger mentality than any of his teammates. He has overcome a two-month injury lay-off and emerged as a leader on the pitch, and there is little wonder Arsenal and Tottenham are both interested. The player who was struggling to breathe in the ocean of Manchester United is the big fish in a small Palace pond.

1. Richarlison
Most sides who pull up a chair at the top table are content to feed off the scraps. Many promoted clubs prioritise top-flight experience when it comes to bolstering their squads. But Watford are not like most clubs. Of the 39 signings they have made since promotion in 2015, only 11 have been from fellow Premier League clubs.

Their alternative business plan has by no means been a proven success. The purchase of Adalberto Peñaranda has been cursed with work-permit issues, while Isaac Success and Roberto Pereyra have failed to establish themselves in the first team. But of the numerous calculated risks Watford have taken on talent from beyond these shores, Richarlison has arguably already been the most successful.

For the princely sum of £11.5m, the Hornets have found an all-action, skillful, tough-tackling, goalscoring winger, and he is still just 20. Only three players in the Premier League have had more shots (45) than the most fouled player in the division (42 times). No player outside the current top six has scored or assisted more goals (8). And while England are handing out caps to every Dom, Jack and Harry, Richarlison is yet to receive a Brazil call-up.

As is the case with Doucoure and Silva, Watford fans accept that their club might well be one of the steps on Richarlison’s path to a higher plane. But for now, Vicarage Road is playing host to some of the best individual talents outside of the elite. Richarlison is the crown jewel.