And we do mean f*** all. No First Division titles, no Turkish Cups, no nothing. 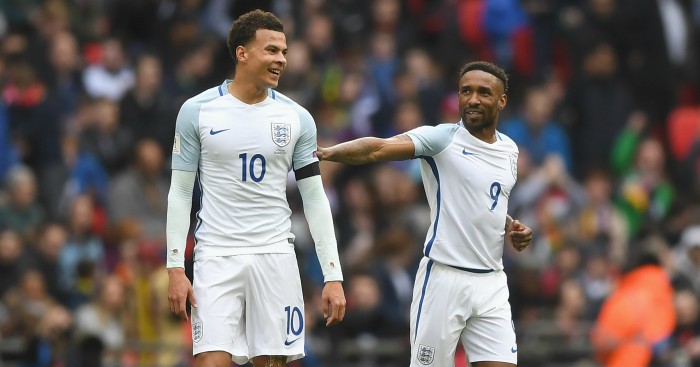 And we do mean f*** all. No Second Division titles, no Turkish Cups, no nothing…

10) Trevor Sinclair
The recipient of 150 hours of unpaid work, a driving disqualification and a £500 fine for calling a police officer a “white c***” this year, Trevor Sinclair has never actually won a club trophy – despite being able to claim exactly the same number of Premier League assists as Christian Eriksen and Antonio Valencia.

9) Kieron Dyer
The proud owner of 33 England caps and yet Kieron Dyer – a genuinely talented footballer though clearly flawed man – has never finished higher than third in the league nor played in an actual cup final, having joined Newcastle just after their back-to-back losing FA Cup finals against Arsenal and Manchester United. That under-achievement – and it is an under-achievement considering his natural talent – feels apt as Dyer’s story is one marked by persistent injury and foolishness.

8) Danny Rose
“It’s no good having a career and not winning anything so to get the first one for me personally, it’s fantastic,” said Kyle Walker after lifting the Carabao Cup. Consider that a burn, Tottenham. And smarting most will be Danny Rose, who tried his damnedest to engineer a move out of Tottenham but has been foiled by a combination of injuries and the stubbornness of his club’s chairman and manager.

“Time is running out and I do want to win trophies. I don’t want to play football for 15 years and not have one trophy or one medal,” said Rose in August, presumably wary of becoming the next Trevor Sinclair or Kieron Dyer. “Sorry, that’s not what I am about. I wouldn’t be happy with that. I want to win something.”

Having been voted the best left-back in the Premier League in successive seasons, Rose clearly believes he deserves more than a runners-up medal from a League Cup final. After all, nobody wants to be in the same boat as Nabil Bentaleb.

7) Leighton Baines
Talk of being voted the best left-back in the Premier League in successive seasons brings us neatly to Leighton Baines, who came close to joining Manchester United in 2013. Had he been sold, he might have had a medal collection to mirror Marouane Fellaini’s haul of FA Cup, League Cup and Europa League; instead he has three times come close to claiming a medal and has emerged with jack all. He was in the Wigan side that finished second in the Championship and then reached a League Cup final in which they were comprehensively beaten by Manchester United. He then joined Everton and reached the FA Cup final in 2009 only to lose to Carlo Ancelotti’s Chelsea.

“During my time and in recent seasons we have just been beneath, we have come close a few times with cup finals, semi-finals, trips to Wembley but falling at the final hurdle,” said Baines last summer as he allowed himself to dream after a summer of significant spending. He is still dreaming and at 33, time is absolutely not on Baines’ side.

6) Dele Alli
This is not the kind of list on which we should find a player touted as a £100m-plus target for Real Madrid and Barcelona. And yet here Dele Alli sits, driving and diving in search of a first trophy, having claimed promotion but no League One title with MK Dons. Like Rose, Alli has twice been voted in the Premier League’s best XI by his peers and yet Tottenham have come up short when it comes to actual silverware. Alli’s own individual form has dipped this season and there is persistent talk that a change of agents has prompted a shift in ambition that could see him leave the club.

“He’s a young player, but he’s not a proven player. At the moment, he hasn’t won anything,” were the chastening words of England manager Gareth Southgate last summer. But logic would surely suggest that Alli – still only 21 – will end up with a greater haul than Southgate’s own pair of League Cups, Full Members Cup and First Division titles. If he doesn’t, it really has gone quite badly wrong.

5) Jermain Defoe
Only six players have scored more Premier League goals than Jermain Defoe but about 600 have claimed more trophies than Defoe’s zilch. You have to feel a little sorry for Defoe, who left Tottenham for Portsmouth in January 2008 and watched his old club win the League Cup final he had helped them reach, before watching his new club win the FA Cup for which he was cup-tied. A year later he was back at Tottenham and was injured as they reached and then lost in the League Cup final.

“I want to win things and get a few medals in the cabinet,” he said so long ago now that it must feel like a mirage. The poor sod. He now seems unlikely to break his duck at Bournemouth.

4) Roberto Firmino
‘The committee have yet to explain how they came up with the figure of £29million to sign Brazilian forward Roberto Firmino from Hoffenheim, who finished eighth in the Bundesliga last season,’ is the line written by Neil Ashton, then of the Daily Mail, in 2015 as he raged against the ‘laptop guru’ helping to make transfer decisions at Liverpool. Firmino had not won anything, so how good could be he? Really very good, as it happens.

Now Firmino really does deserve silverware after scoring 34 goals in 93 Premier League games despite not actually being a proper striker. Even Adam Lallana has a Johnstone’s Paint Trophy and Sadio Mane has won the Austrian Bundesliga.

“I am very happy here at Liverpool and my thinking is to build a history with many victories and titles by that club,” said the Brazilian earlier this month. We wish you the best of luck, fella.

3) Stan Collymore
As Daniel Storey wrote last year: ‘England’s very own nearly man. There are many supporters of Nottingham Forest and Liverpool who will talk long into the night about Collymore’s natural talent, but his three England caps and lack of any major career honours is testament to the problems that bubbled under the service.’ As does the fact that he scored fewer Premier League goals than Dean Holdsworth.

Collymore did at least reach one major final, but he lasted only 74 minutes of the absolutely rotten 1996 FA Cup showpiece before seeing Eric Cantona score the winner for Manchester United. The irony is that Collymore had seemingly been close to joining United the summer before only for Sir Alex Ferguson to opt for Andy Cole (five Premier League, a Champions League and two FA Cups). Ouch.

2) Matt Le Tissier
When Southampton pair Matt Le Tisser and Alan Shearer sat in tears having ended up on the losing side of the Full Members Cup clash with Nottingham Forest in front of almost 68,000 at Wembley, they must have talked about how their chance would come again. For Shearer it would, with the Premier League being claimed three years later. For Le Tissier, that would sadly be as close as he would come to glory. He would never finish higher than seventh and the Saints would reach an FA Cup final the year after he left the club.

“I’ve no regrets whatsoever,” Le Tissier told FourFourTwo in 2010. “From seven years old I had an ambition to be a professional footballer and I had an ambition to play for England, and I fulfilled both at Southampton. Yes, I knew I probably wouldn’t win any honours, but when you’re at a club that size, staying in the Premier League for 16 years gave me as much pleasure as winning a medal if I’d gone somewhere else. No one expected us to stay up there for that long. I was so chuffed to be a part of that.”

1) Harry Kane
“I don’t see why he wouldn’t stay there for the rest of his career,” says Matt Le Tissier when asked about Harry Kane. And Harry Kane himself intimates the same. But the rest of the footballing world is shifting from foot to foot and wondering when this great, great goalscorer might want to win some trophies instead of individual trinkets. “If he has a hunger for trophies and for notoriety he would have to leave Spurs, if he has no hunger for that, but (wants) recognition and stability, he would stay at Spurs,” says former Tottenham boss Andre Villas-Boas. It’a hard to argue.

Time is at least still on Kane’s side; he is remarkably still only 24. And he already has over 100 Premier League goals, two Golden Boots and three appearances in the PFA Team of the Year. He is probably England’s only truly world-class player. And yet…

“I’ve always said that team trophies are what I want to achieve,” says Kane. “For me, it’s about winning trophies – that’s always the aim.”

The next two years are going to be intriguing.