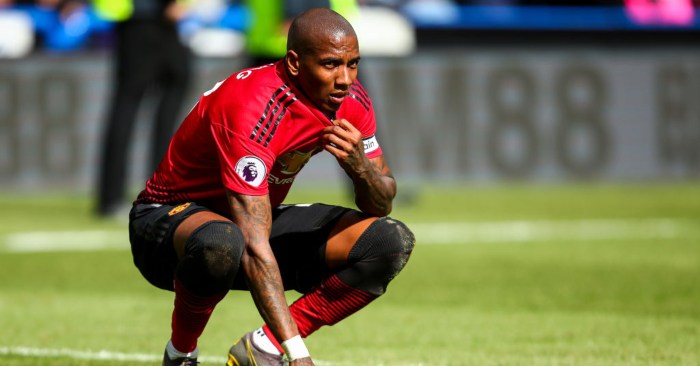 And by ‘regular’, we mean that they started at least 25 league games last season…

10) Glenn Murray, Brighton (30 Premier League starts)
Glenn Murray with 13 goals and Shane Duffy with five goals were the only two Brighton players to notch more than three times for the Seagulls last season, so it’s ridiculous that anyone would even think of phasing out Murray, right? The problem is that a) Murray will be 36 in September and b) having him in the team makes Brighton so over-reliant on the long ball that more expensive, mobile new signings are left in the cold. Graham Potter will surely not make the same mistakes as the dear, departed Chris Hughton, who was loyal to a fault and eventually paid with his job.

“I can’t wait to get back and play with him,” said Murray in May when Potter was unveiled. But if Murray is still Brighton’s starting striker past his 36th birthday, then Potter will have failed.

9) Billy Sharp, Sheffield United (34 Championship starts)
Captain, first-choice striker, scorer of 23 Championship goals, but Billy Sharp is 33 years old and has just 18 minutes of Premier League football to his name. With the best will in the world, he will surely not play regularly in the top flight. Mind you, he will take inspiration from the man below him on this list who was also promoted at the age of 33 after scoring 23 Championship goals, and somehow ended two Premier League seasons in double figures. There is hope, however slim.

“There will be players who get left behind and players who kick on. My responsibility is to make sure the lads do not take their foot off the gas. We need to improve individually and as a team. It is a big step up,” said Sharp last week. He knows because he was promoted with Southampton seven years ago, and was back in the Championship on loan by the end of August. Will history repeat itself?

8) Neil Taylor, Aston Villa (31 Championship starts)
A penny for Neil Taylor’s thoughts when he heard that Aston Villa had made middling left-back Matt Targett the third most expensive signing in their history. Having dropped down to the Championship because he had lost his first-team place at Swansea, Taylor has been replaced just as soon Villa have been promoted to the top flight. Such is the lot of the pretty good but not great footballer.

Matt Targett's signing for #AVFC proves to be almost double the upgrade on Neil Taylor.

29% of Targett's crosses found a man last season, compared to 15% of Taylors. Granted there's plenty more to consider too. pic.twitter.com/BsPNi3vIFq

Yedlin’s biggest weakness is his defensive decision making which is a bit of an issue when you’re playing a right-back. Tremendous athlete, poor defender and he showed us that today.

Any manager taking over at Newcastle will spot the weakness at right-back. It’s a weakness so dangerous that Rafa Benitez switched to a three-man defence so he could play DeAndre Yedlin and Matt Ritchie as wing-backs and survive in the Premier League by hook or by crook. Yedlin is not a Premier League-standard defender and has shown exactly that at Tottenham, Sunderland and now Newcastle.

In a list of Newcastle players who started more than 25 Premier League games last season – Martin Dubravka, Ayoze Perez, Ritchie, Jamaal Lascelles, Salomon Rondon and Yedlin – the American sticks out like a sore, out-of-position thumb. There is work to be done on that Newcastle squad and it should begin at right-back.

6) Robert Snodgrass, West Ham United (25 Premier League starts)
He enjoyed something of an Indian summer last season, new boss Manuel Pellegrini belatedly kick-starting his West Ham career on his return from a loan spell at Aston Villa. The opportunity – created by injuries to first Manuel Lanzini and then Andriy Yarmolenko – was seized and no other West Ham player beat his measly total of five Premier League assists. But the Scot will be 32 in September and has presumably been watching new signing Pablo Fornals tear up the European Under-21 Championship this summer as an attacking midfielder. You don’t spend all that money and then stick with Robert sodding Snodgrass.

The links with a Leeds loan return might have been wishful thinking but it would be a surprise to see Snodgrass in the West Ham starting XI in August. Another Premier League season with another former club Norwich? It would not be the worst of ideas.

5) Willian, Chelsea (26 Premier League starts)
“He deserves so much respect and backing for what he has already achieved at the club,” said Willian of prospective new Chelsea boss Frank Lampard, but that kind of creeping should not guarantee the Brazilian a place in Chelsea’s starting XI next season. Frankly, three goals in 26 Premier League starts is a pathetic return for an attacking player, and if new signing Christian Pulisic does not ease him out of the picture, he should get the boot when Callum Hudson-Odoi recovers from injury.

With both Willian and Pedro out of contract next summer, neither should be starting more than 15 Premier League games next season. The challenge for Lampard is to usher in a new era that does not include average players over the age of 30 who really should be receiving their pay in yuan by now.

4) Kieran Trippier, Tottenham (26 Premier League starts)
“Obviously this club has been very good for me over the last few years but I’ll enjoy my summer, come back in pre-season and that’s when I’ll sit down with the manager and have a talk about my future. I see a lot of speculation about me not being here. I give everything, 100 per cent every game, win lose or draw. So we’ll see what happens in pre-season,” said Kieran Trippier last month, trying to recover from the twin disappointments of Champions League final defeat and the probable end of his England career.

There has been talk of interest from Napoli and Juventus, but Trippier is English so wants to stay in England, though that should mean a drop into the middle reaches of the table (Newcastle? He’s better than Yedlin at least). One thing is for certain: Mauricio Pochettino sees neither Trippier nor Serge Aurier as a future Totenham right-back. Both are defensively vulnerable, which is not a great look on a defender.

3) Shkodran Mustafi, Arsenal (31 Premier League starts)
When it comes to Arsenal, we listen to the BBC’s David Ornstein. And he said last week: “I was told that after the Europa League final that Unai Emery, who had always put his faith in Shkodran Mustafi despite a number of high-profile mistakes, has decided enough is enough with him and he is no longer in favour of keeping him, so he could be sold. Arsenal have tried to sell him almost every window since they signed him.”

And yet despite Arsenal trying to sell him, and Arsenal fans largely sobbing at the mention of his name, Mustafi started more Premier League games last season than any other outfield Arsenal player. While Sokratis, Laurent Koscielny and Rob Holding all suffered injury problems, Mustafi stayed stubbornly fit. Surely Arsenal are going to buy a new centre-half and surely Arsenal will not tolerate Mustafi much longer. Mind you, this is Arsenal.

2) Jorginho, Chelsea (37 Premier League starts)
It’s not that Jorginho is not a good – or even great – player but the new Chelsea manager will surely take the easiest PR victory in the world and plonk N’Golo Kante back at the base of the Chelsea midfield. Does that leave a space for Jorginho? Or will he follow Maurizio Sarri to Juventus just as devotedly as he followed him to Chelsea next summer? And we can all talk about that season when we had one of the world’s best midfielders in the Premier League but everybody got obsessed with him not recording any bloody assists.

And some Chelsea fans want to crucify Jorginho? For what exactly? pic.twitter.com/UvVlHp2RpS

And to think that a year ago, Young went to the World Cup with England as their first-choice left-back and it was actually the right call.