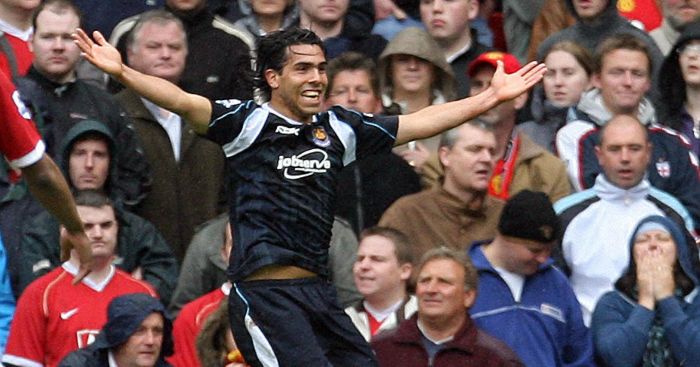 Troy Deeney, Trezeguet and Dominic Solanke all scored multiple goals for relegation-threatened Premier League clubs at the weekend, while Michail Antonio has six in his last four games. They might all make a list like this one day. What an accolade.

10) Jon Stead
Blackburn did not take the conventional route to Premier League safety in 2004. Graeme Souness gazed upon his squad that winter and saw vast experience in Brad Friedel, Markus Babbel, Tugay, Andy Cole and Dwight Yorke, allied with the promising youth of Paul Gallagher and Steven Reid. But it lacked that key ingredient: Ali Dia. And if not him, then the fresh-faced innocence of an in-form Third Division striker would have to do.

Jon Stead had scored 16 goals in 26 games for Huddersfield before Blackburn came calling. He joined on February 2, with Rovers scoring eight times in the four matches immediately before his arrival. More firepower was clearly needed.

Stead perhaps benefited from everyone else wondering quite what was happening as he scored in 1-0 wins over Middlesbrough, Everton and Manchester United, as well as in a 1-1 draw with Newcastle and a 2-0 victory at Aston Villa. With the final goal in a pulsating 4-3 defeat of Fulham, the 21-year-old finished as Rovers’ second-top scorer in a whirlwind half-season.

9) Christophe Dugarry
“It is the biggest signing this club has ever made,” said Steve Bruce, who likely privately revised that grandiose statement when Piotr Swierczewski arrived on loan three weeks after Birmingham rolled out the red carpet for a world and European champion in 2003.

Christophe Dugarry was an awkward fit as a Premier League saviour. The Blues needed goals and les former Bleu was never prolific. He played for Milan, Barcelona and Marseille but scored more often for Steve Bruce (6) than he did for Arrigo Sacchi and Louis van Gaal combined (4).

After what must have been one of the most surreal settling-in periods in recent memory, Dugarry sparked the most famous of all Easter resurrections. He scored in four consecutive wins over two weeks, putting Sunderland, Charlton, Southampton and Middlesbrough to the stylish sword as Birmingham strolled to safety. Swierczewski made one appearance: a 38-minute cameo in a 3-1 defeat to Chelsea.

Birmingham looked destined for relegation from the Premiership in 2003, until Steve Bruce signed Christophe Dugarry.. pic.twitter.com/IHBPgOUDqJ

8) Lamine Kone
Sunderland spent a single weekend outside of the relegation zone from the opening day of the 2015/16 season to the start of the following March. In between, their January signings would prove crucial.

Steve Harper and Dame N’Doye undeniably existed. But Jan Kirchhoff and Wahbi Khazri improved the Black Cats exponentially at either end. And Lamine Kone did both by himself.

Kone instigated defensive enhancement but could often be as effective going forward. He forced a David de Gea own-goal winner against Manchester United in February, before scoring twice against Everton on the penultimate day. They obviously tried to sign him for about £20m as a result, because Everton.

7) Steven Fletcher
It was Sunderland who led the £12m search when Steven Fletcher carelessly misplaced his cranium. The striker had spent two years at Wolves, culminating in their comprehensive relegation in 2012.

Fletcher actually scored more goals in the season they went down (12) than the previous campaign when they stayed up (10). How curious that Wolves earned ten points from his strikes in the former and 12 in the latter.

In May 2011 alone, the Scotland international scored in a draw with Birmingham and wins over West Brom and Sunderland. Wolves stayed up by a single point, with no other player reaching double figures for goals.

6) Andy Dibble
While Andy Dibble played a small and inadvertent part in creating unbreakable Premier League history in 1995, his exploits 12 months earlier provided more abiding memories for older Manchester City fans who would have raised an eyebrow if you had told them they would be celebrating beating UEFA two and a half decades later.

Their eventual demise and collapse to the third tier counters the suggestion that Dibble helped shape the course of City’s modern history, but that does nothing to dilute the impact he had in the 1993/94 season. He played 11 games – one each in October and February before nine appearances across March, April and May – and lost just one. Manchester United at Old Trafford were the only team who scored past him more than once in a match that season.

City finished a heady 16th, three points above relegated Sheffield United, after Dibble inspired wins over Aston Villa, Southampton and Newcastle. He was only in the team because of an injury to their first-choice keeper; City might have gone down if they wrapped Tony in Coton wool.

5) Scott Parker
“Other than Scott Parker, there is not a player we wouldn’t sell if it was the right bid,” said West Ham co-owner David Sullivan in April 2010, the Hammers just about safe thanks to some inspirational midfield performances from a haircut you could set your watch to.

“Scott will not be sold and we will be buying more than we are selling. There will be no fire-selling and we will enhance the squad, not diminish it. We will have to shake up the pack because there is no point kidding ourselves otherwise we will be in the same position next year – the table doesn’t lie.”

The Hammers were relegated the following season, finishing bottom and seven points from survival. Although at least they didn’t sell Parker, who was crowned FWA Footballer of the Year despite failing to conduct lightning in east London for the second time. So really they still won. Except they went down.

4) Kevin Campbell
From something absolutely dreadful – being described as a “cannibal” and “discoloured” by his own chairman in comments Mehemet Ali Yilmaz later asked not to be published – came an unlikely romance. Trabzonspor had mistreated Kevin Campbell so terribly but Everton would not do the same.

Campbell was understandably furious at his handling in Turkey, stating that “it would be better if I was allowed to leave with my pride” in February 1999. Having trained at the FA’s School of Excellence for a short period to keep fit, Everton offered the striker an olive branch in late March.

The Toffees were 16th, the Premier League’s lowest scorers with 23 goals in 30 games and sliding towards the First Division. Duncan Ferguson had been sold to Newcastle in November and Walter Smith was running out of ideas. Campbell was his last roll of the die.

It came up double sixes. The striker scored braces in three consecutive wins and a hat-trick against West Ham to lift the club to mid-table safety and earn himself a permanent contract. He obviously finished the season as their top scorer despite playing literally only eight games, because Everton.

On this day in 1999, Kevin Campbell made his #EFC debut. After failing to score in his first two games and Everton staring relegation in the face, Campbell scored 9 goals in the following 5 games to keep the Blues in the Premier League. pic.twitter.com/U800o5BXV2

3) Robert Huth
How did Leicester go from losing 11 of 13 Premier League games between September and December 2014 to winning seven of nine from April 2015 onwards? Nigel Pearson’s switch to a five-man defence certainly helped, laying the foundations for the sort of ferocious counter-attacking that could perhaps win a title at a more established club. But the most important, clear change of all was the introduction of Robert Huth.

His influence was not immediately obvious. Huth’s first five games resulted in three defeats and two draws. But Rome wasn’t built in a day and Pearson is hardly the sort of man to lose his patience or temper so easily and call someone an ostrich or put his hands on an opposition player’s throat because he accidentally knocked him over. Leicester and Huth soon settled into each other’s company and hardly looked back from there.

2) Carlos Tevez
It seemed as though West Ham had, for want of a better phrase, absolutely f**ked it. The summer 2006 signings of Carlos Tevez and Javier Mascherano had created far more problems than it had solved, the former failing to score in his first 19 appearances and the latter farmed out to Liverpool after failing to get past Hayden Mullins in the midfield pecking order. A Premier League record £5.5m fine was meted out in April, by which point they were 19th with three games left.

Tevez had at least scored: once in a 4-3 defeat to Tottenham and thrice in games against Blackburn, Middlesbrough and Chelsea. But the Hammers were heading down, with relegation rivals Wigan, European hopefuls Bolton and champions Manchester United still to play.

Wigan were swept aside 3-0 before Tevez took centre stage, scoring two and assisting one against Bolton and netting the only goal in an unlikely victory at Old Trafford. Sheffield United, who went ten points clear of West Ham after beating them on April 14, were relegated with a meagre £20m compensation package to come.

Southampton finished 17th in 1995/96, safe on goal difference after Le Tissier scored in two 1-0 wins and a 3-1 victory against Manchester United from April onwards.

Southampton finished 16th in 1996/97, safe by a point after Le Tissier scored in a 1-0 win over Newcastle in March and a 2-0 victory against Blackburn in May.

Southampton finished 17th in 1998/99, safe by five points after Le Tissier scored in a 1-0 win over Sheffield Wednesday in March and a 2-0 victory against Wimbledon in May.

Thank the lord he’s kept himself to himself in retirement. What a player he was.

Matt Stead (no relation to number 10)