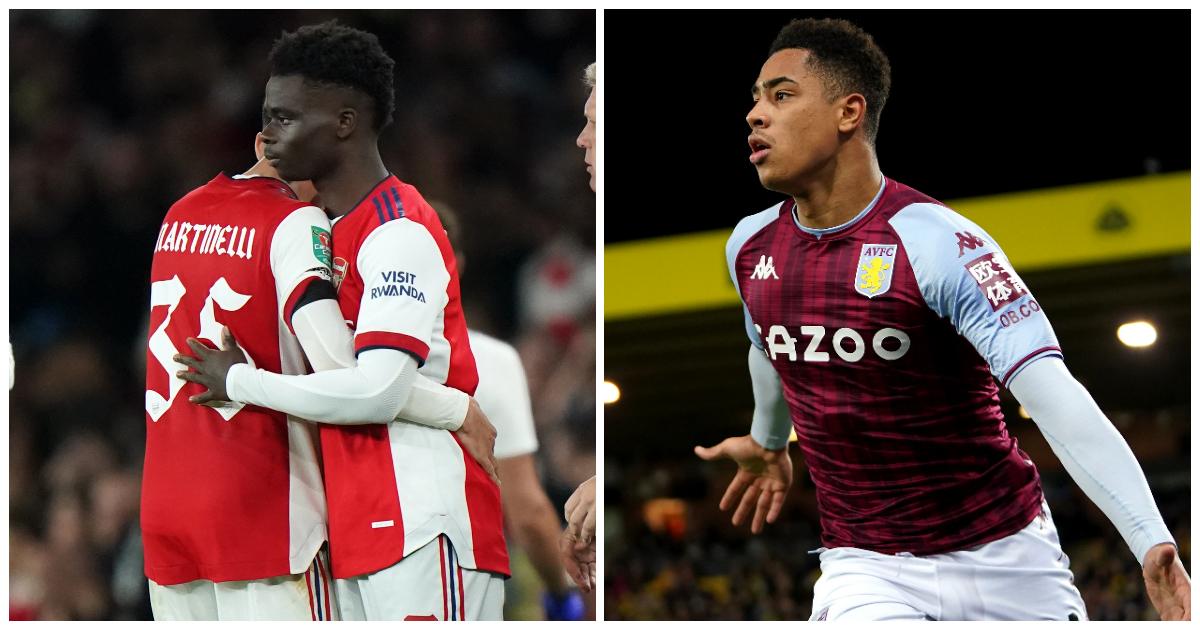 We have ranked the top 10 Premier League performers in 2021 who have been 20 years old or younger at any point; we will disregard anything that happened after their 21st birthday as they are now ancient.

10) Callum Hudson-Odoi (Chelsea)
It has been a tricky year for Hudson-Odoi, who turned 21 in November. He has featured 24 times in the Premier League under both Frank Lampard and Thomas Tuchel, scoring twice. Despite his poor scoring record, he has shown his potential in glimpses and has filled in quite nicely at wing-back under the Blues’ current boss.

Hudson-Odoi has fallen far behind Bukayo Saka, Mason Greenwood and Emile Smith Rowe in Gareth Southgate’s pecking order for the England squad, but he definitely has the potential to get there again (though turning down Under-21 call-ups is Not A Good Look). A loan could do him some good, but his availability is very handy to Tuchel, who can use CHO as a wing-back or as part of the front three.

9) Gabriel Martinelli (Arsenal)
Many Arsenal fans have been critical of how Mikel Arteta has utilised Martinelli, claiming the Arsenal manager was not giving him the minutes he merited, but Arteta has been proven right as the Brazilian attacker is now thriving after taking time to get back to full fitness.

During the second half of 20/21, Martinelli made his first start of 2021 in a 3-0 win at Sheffield United, where he scored the second goal of the game. The 20-year-old helped Brazil win the gold medal at the Olympics before returning to London Colney after little summer rest. He, and Arsenal, struggled at the start of the season but Martinelli took his chance against Newcastle last month and hasn’t been out of the side since. Having scored three goals in his last two matches, 2022 is looking like it could be a huge year for the Brazilian and the Gunners.

8) Tino Livramento (Southampton)
Southampton signed Livramento from Chelsea for a measly £5m in the summer and he was thrown straight into the starting XI by Ralph Hasenhuttl despite having no Premier League experience whatsoever.

The 19-year-old has been excellent so far this term, playing the full 90 minutes in every league game except the 0-0 draw at Man City when he was given a full four minutes off. Unfortunately for him, he is a right-back, so getting into the England senior squad is a huge ask, with so many already waiting in the wings for a call-up.

Despite many young players playing more in the top flight this year, Livramento makes the cut due to how quickly he has adapted as well as the consistency of his performances. £5m is looking like an absolute steal.

7) Rayan Ait-Nouri (Wolves)
A player who has vastly improved this season, Ait-Nouri has become a fans’ favourite at Molineux and is one of the first names on Bruno Lage’s team sheet.

He joined Wolves on loan in 2020 before joining permanently in the summer for around £10m. Ait-Nouri did well last term playing on the left flank, making 14 appearances between January 1 and matchday 38, but seems to have improved tenfold since the home defeat to Manchester United on the last day of the season.

The 20-year-old has played nine times in the Premier League this campaign, but is currently out injured, coming off in the 1-0 home defeat to Liverpool. It was 0-0 when he came off in the 92nd minute; make of that what you will.

Is there any reason no-one has signed Rayan Ait-Nouri for £100m yet?

6) Emile Smith Rowe (Arsenal)
Smith Rowe got his first chance under Mikel Arteta in the Premier League on Boxing Day in 2020, and neither have looked back since. The young attacking midfielder has played with confidence, swagger and low socks since emerging as the primary playmaker in Arteta’s team and has arguably been Arsenal’s best player this year.

The Gunners’ No. 10 turned 21 years of age in July, so we can only judge him on the second half of last season, which is a shame as his finishing has been sublime this season. Smith Rowe signed a new contract in the summer and made his debut for the senior England squad in November; it has been a huge 21/22 for him already.

5) Wesley Fofana (Leicester)
Another player we can only judge on last season as Fofana broke his leg in a pre-season friendly against Villarreal, and also turned 21 earlier this month. The injury is the reason he is one spot ahead of Smith Rowe; Leicester have looked very poor defensively without him, and below their usual standards all across the pitch.

The Foxes bottled a top-four finish again last season, their low point of 2021, and look a million miles off making the Champions League places this term without the French defender. Fofana played 17 Premier League matches this year and won the club’s Young Player of the Season award for 20/21.

His fine performances have seen him linked with Real Madrid and Chelsea, and Leicester will be keen to at least double the £30m they paid Saint-Etienne when he inevitably moves to a bigger club.

4) Jacob Ramsey (Aston Villa)
The England Under-21 midfielder has played 32 times this year, a superb achievement for a player who has gone under the radar playing for both Dean Smith and Steven Gerrard at Aston Villa.

In Ramsey’s 15 Premier League appearances this term he has scored twice – two superb goals at Arsenal and Norwich – and has started five out of Gerrard’s six matches in charge. To become an important player for a top-flight side at the age of 20 is something that should not be taken lightly, and the midfielder is going about his business very well in a strong Villa team.

3) Mason Greenwood (Manchester United)
Everyone knows how good Greenwood is, and how good he can be. He is one of the best finishers in the league and can find the back of the net with both feet. The 20-year-old forward has played 33 times in the Premier League this year, scoring ten goals in the process, which is a very respectable return.

His year has also gone under the radar, with the arrival of Cristiano Ronaldo as well as the circus surrounding Ole Gunnar Solskjaer’s exit taking some of the gloss off a year in which he became the fourth-highest goalscoring teenager in the league’s history.

With 2022 just around the corner, Greenwood could return to the England set-up for the next international break, and it could be a very big year for him under Ralf Rangnick, who will surely do his progression no harm whatsoever.

2) Bukayo Saka (Arsenal)
Another England star, Saka has carried Arsenal on his back at times, contributing massively without always having the goals to show. In 36 league games in 2021, the 20-year-old winger has scored eight and assisted seven.

Despite a decent number of goal contributions, Saka’s play goes beyond statistics. He is tremendous at drawing defenders out of position, and his decision-making is not respected enough. Saka is truly a player a lot of rival fans are unable to appreciate; you have to watch him regularly to notice how good he really is.

1) Phil Foden (Manchester City)
Foden may have turned 21 shortly after the end of the season, but that half-season for Man City was enough for him to claim top spot on this list.

The Citizens won their fifth Premier League crown in 20/21 and Foden was hugely influential in their title success. He made 18 appearances between January 1 and the end of the campaign, scoring seven and assisting a further four.

Foden is simply the best young player in the division. The Stockport Iniesta will hopefully stay in England for the rest of his career, because he is one of the most aesthetically pleasing players you will ever watch. With him, Saka, Greenwood, Jude Bellingham, Conor Gallagher, Declan Rice and more, the future looks very bright for the Three Lions.