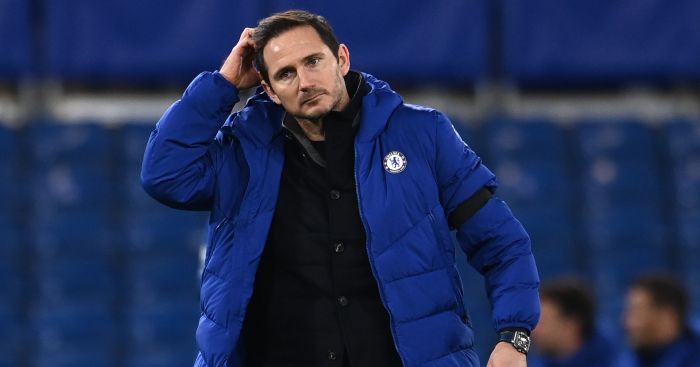 There is sadly no equivalent of Frank de Boer pinging them in in training and telling Martin Kelly he’s shite before starting him in a Premier League game, but there is plenty of supposedly inside information surrounding Frank Lampard’s untimely Chelsea demise. Here are ten of the most interesting titbits.

10) Lackadaisical versus Luton
‘Abramovich made the final call to sack Lampard…after seeing no real signs of improvement in the FA Cup win over Luton’ – Martin Lipton, The Sun.

Little over a fortnight after suggesting that only ‘an absolute car crash in the next few weeks, a drop into the nether regions of the Prem table’ or ‘an embarrassing FA Cup exit’ would seal Lampard’s fate at Chelsea, the Deputy Head of Sport at the nation’s best-selling newspaper is here to state that dropping from 9th to 9th in the Premier League table and beating Luton to book an FA Cup fifth-round date with Barnsley was the final straw for Roman Abramovich.

The owner was said to be ‘left concerned at the flat and edgy nature of the performance’ at Stamford Bridge, with Timo Werner’s penalty miss symbolic of ‘the lack of confidence’ that had permeated the squad.

So if Chelsea had confidently thrashed Luton then Thomas Tuchel would remain unemployed, Mason Mount would not be a football orphan and Lampard may still be on course to become FERGIE MK II. It’s a real sliding doors moment.

9) The Leicester loss
‘The Blues had already reached out to Lampard’s replacement in-waiting, Thomas Tuchel, ahead of Sunday’s FA Cup win over Luton Town, with last week’s 2-0 loss at Leicester City the final straw for Abramovich’ – Nizaar Kinsella, Goal.com.

The consensus is actually that the 2-0 defeat to Leicester on January 19 was pivotal. That was Chelsea’s fifth defeat in eight league games but also indicative of what The Guardian describes as ‘their inability to beat the Premier League’s most accomplished sides’.

Results between teams that finished in Top six last season since August 2019. Thats the month Lampard took over at Chelsea. According to journalists, United struggle against the big teams. #MUFC credit to Statsperform for the picture pic.twitter.com/LTSYaojExn

They lost 2-0 to Liverpool in September, drew 0-0 with Manchester United in October before they turned a bit good, drew 0-0 with Tottenham in November when neither team was particularly bothered about winning, then lost to Everton in mid-December. The Boxing Day loss to Arsenal was another catalyst, while The Athletic quote a source as saying Abramovich was “very, very unhappy” with the Manchester City surrender and “furious” at how they were handily beaten by Leicester, by which point he had “seen enough” and spent the following morning trying to secure an interim replacement. The Independent actually cite the draw with Aston Villa in December as a point Lampard could have been let go.

West Ham in 7th remain the only top-half side Chelsea have beaten all season. Seven of Lampard’s eight league victories in 2020/21 actually came against British managers, with old nemesis Marcelo Bielsa the only exception. Stop crying, Frank Lampard.

8) The squad
‘The arrival of six new members brought a different kind of problem, especially as Chelsea failed to get many fringe players out’ – Simon Johnson, David Ornstein, Raphael Honigstein, Adam Crafton and Liam Twomey, The Athletic.

Another theme that runs consistently through the many ‘inside stories’ is that of Lampard being left with a ‘bloated’ and ‘unbalanced’ squad. Chelsea sold only three players in the most recent transfer window, with Alvaro Morata, Nathan and Mario Pasalic all completely out of the picture under the manager anyway. Willian and Pedro also left but their contracts had simply expired.

Even the usual loan army could not rely on the typical degree of conscription. Ethan Ampadu, Michy Batshuayi, Davide Zappacosta, Ross Barkley, Tiemoue Bakayoko, Ruben Loftus-Cheek and Victor Moses were all temporarily discarded, along with Danny Drinkwater and Fikayo Tomori by the winter, but the feeling is that Chelsea were just left with too many players and not enough spots. No Premier League side has used more players (27) this season; Marcos Alonso and Abdul Baba Rahman are still sodding there.

According to the Daily Telegraph – who also claim that ‘some of the young players…are believed to have complained about the treatment they received from disgruntled team-mates’ – Lampard ‘was deeply concerned by the impact of being left such an inflated squad to manage’. Poor thing.

It created a difficult dynamic, as identified by an Athletic source: “There was a danger of a bit of a divide developing between those playing and those who weren’t. There were those who weren’t putting in the same effort as others in training.”

7) Player relationships
‘Many players didn’t like how the manager spoke to them, and there were questions about his man-management’ – Miguel Delaney, The Independent.

That bled into another damning issue: one of communication. Another Athletic source claimed that Lampard only talked regularly to the players “he liked”, with others “who weren’t in the team” claiming they “didn’t hear from him for many months”. It created the obvious problem of many ostracised players being unsure of how they could earn their place in the side and what they had done wrong in the first place, if indeed anything at all.

The Daily Mail claim that his approach ‘left a number of players baffled’, including when the manager offered a ‘confused’ squad ‘an optional day off’ despite them being ‘well aware the ploy was a test of their commitment’.

Just stick names in an envelope and be done with it next time, fella.

Most outlets go in quite heavily on how he personally dealt with players being a serious problem for Lampard, with a couple of individual cases brought forth.

6) Rud health
‘His decision to completely ostracise defender Antonio Rudiger, an influential member of the squad, at the start of the season is known to have bewildered players’ – Sami Mokbel, Daily Mail.

After missing almost the entire first half of the 2019/20 season due to a groin injury, Antonio Rudiger started 24 of Chelsea’s 31 games from mid-December onwards. The German featured in the first leg of the Champions League last-16 exit to Bayern Munich and every FA Cup round from the fifth to the final as he seemed to have earned the trust of Lampard.

Lampard really binned Rudiger the whole season but expected him to fight for his job in his last game. While Tomori’s in Italy. 😭

Yet this campaign started with transfer links to Tottenham and West Ham as Rudiger was frozen out before being randomly thawed in time to play both Fulham and Leicester.

The Daily Telegraph detail arguments between Rudiger and captain Cesar Azpilicueta ‘on more than one occasion’. The Athletic refer to the centre-half as ‘an individual thought to be held in high regard by the Chelsea hierarchy’. Jacob Steinberg of The Guardian reports that the German ‘had fallen out’ with assistant manager Jody Morris and was only brought back into the first-team fold as Lampard ‘ended up trying to protect harmony within the squad’. It might have worked, albeit at his own expense.

5) Kepa and Granovskaia
‘Despite being a club legend, insiders believe that Lampard’s relationship with director Marina Granovskaia is key as her influence at the club and over Roman Abramovich is hugely important’ – John Cross, Daily Mirror.

The relationship between Lampard and club director Marina Granovskaia was seemingly untenable by the end. One player was central when it came to the forming of fractions between manager and board.

It was Marina and the diamonds – namely Kepa Arrizabalaga – that did for Lampard. The Independent note that ‘a few fraught discussions’ were held over the Spaniard. The Athletic say his treatment was ‘one of the biggest points of contention’.

The belief was that Lampard did little to encourage or support the keeper at his various low ebbs, leaving Granovskaia and Petr Cech to carry that burden after dropping him from the starting line-up for a period last season in favour of Willy Caballero, before pushing for the signing of Edouard Mendy at a time when Kepa felt things had finally ‘improved’.

As The Athletic have it: “They clashed over Kepa. Lampard put in a request for a replacement and was told he should try putting his arm around Kepa, to help build his confidence. Lampard was insistent though.”

READ MORE: Sympathy for Lampard? He was over-promoted…

4) He was never the long-term choice
‘He and his backroom team were also under scrutiny from inside the club – underlining the feeling of those around Lampard that Chelsea were always looking for the first available way out of their experiment’ – Matt Law, Daily Telegraph.

Pretty simple one, this. A pervading belief is that Chelsea only appointed Lampard in the first place as an effective way to ‘reconnect’ with supporters who might have been disillusioned after the successful but unpopular reign of Maurizio Sarri. They figured he would oversee the development of a promising crop of youth players at a time when many other managers might have rejected the post with Eden Hazard leaving and a transfer ban looming.

One sincerely doubts whether Lampard, as the Telegraph suggest, ‘was the only choice for Chelsea’ because they lacked their usual ‘pulling power’, but still. It seems he feared this might happen once the Blues had a good enough excuse, like beating Luton while not being great. The Mirror refer to ‘question marks over whether Granovskaia…wanted Lampard as manager in the first place’.

The Telegraph add that Lampard’s reported initial three-year contract was only ever two with the option of a further 12 months, thus Abramovich will only be sending another £2m or so across in his pre-existing compensation package standing order.

3) Declan Rice
‘Lampard wanted the club to sign West Ham midfielder Declan Rice and pushed for him again ahead of January. But some at the club had reservations about re-signing the player who was released from the academy as a teenager.

‘In December The Athletic were told: “He needs to stop pushing for Rice or he’ll lose his job. The hierarchy are very wary about the potential embarrassment of buying back an academy reject at huge expense.”‘

2) Tactics
‘Both senior players and new signings were constantly “baffled” by the tactics, or the apparent lack of them’ – Miguel Delaney, The Independent.

The above story pretty much dismantles Lampard’s entire coaching reputation in one fell swoop with the following paragraph:

‘It should be noted that some opposition managers in the Premier League thought the same. They didn’t think Chelsea were that difficult to prepare against. Players like Werner or Havertz weren’t usually in positions where they would “really hurt you”.’

That James Maddison interview gets even better. “They switch off sometimes from set pieces and we knew that was something we could pick on,” indeed.

With Werner in particular, The Athletic say his teammates were ‘horrified’ to see his belief ebb away with each passing week, while Kepa was among those ‘who felt that Lampard did not provide him with clear tactical instructions’. In fact, some players ‘were just told to simply go out on the pitch and express themselves’ because he is his own uncle.

1) Training sessions
‘Even the intensity of the training sessions was raised as a point of alarm by the end’ – Simon Johnson, David Ornstein, Raphael Honigstein, Adam Crafton and Liam Twomey, The Athletic.

Until and unless it is revealed that Lampard banned tomato ketchup from the Cobham canteen, then the other staple of managerial sacking explanations will underpin his Chelsea tenure. Those training sessions were murder so thank the lord that the incoming Tuchel is notoriously slack when it comes to running and pressing and all that lark.

What ‘was a refreshing change from the repetitive nature of Sarri’s exercises’ soon contributed to Lampard’s demise, according to The Athletic. There is even the suggestion that players were worked ‘too hard’ as far back as June, with no thought as to whether regular ‘intense drills’ during weeks with at least two matches were worth the potential injury risk in such a condensed season.