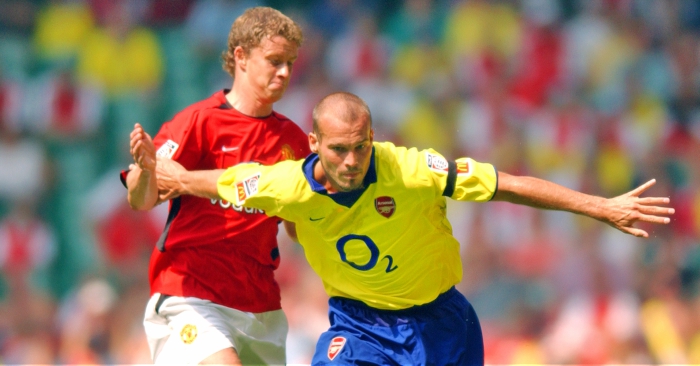 And we’re talking actual Scandinavian nations here. Which means Denmark, Norway and Sweden. Our sincere apologies go out to Finland, Iceland and the Faroe Islands.

10. Daniel Agger (Liverpool)
For those in any doubt as to Daniel Agger’s status as a Liverpool cult hero, consider the reaction to his retirement in 2016. Aged just 31, the centre-half confirmed that he was “done with this circus”. His adoptive Anfield family displayed as much gratitude and regret as his Danish brethren.

Agger spent eight years at Liverpool, arriving in January 2006 as a relative unknown, and leaving in summer 2014 under the cloud of a troubled relationship with manager Brendan Rodgers. In between, he immersed himself in the culture of the club, scored some fantastic and important goals, and established himself as one of the finest ball-playing centre-halves in the Premier League.

Thank you for your support.A great experience.It's sad,but it is the right decision to stop. I'm proud of my career. pic.twitter.com/Geu9y47vnN

To describe Agger’s career as painfully short is doubly true. Eight of his 12 years as a professional were spent on Merseyside, while he cited constant injuries and an over-reliance on painkillers as his reasons for retirement. He made more than 30 appearances in just four of his eight seasons at Anfield, but is still remembered fondly. In truth, his reputation has perhaps been augmented by his perpetual absence – he was never truly among the best in the top flight – but he was a fine player.

9. Christian Eriksen (Tottenham)
That Christian Eriksen is still Tottenham’s marginalised, peripheral star, at least outside White Hart Lane circles, is unlikely to affect him. An individual who does not seek the limelight, the Dane is not a prodigious English talent, nor is he considered one of the club’s seasoned foreigners at 25, nor one of their much-improved players. He has been a model of consistency for four years, a bargain signing made by Andre Villas-Boas, but refined under Mauricio Pochettino.

All it took for Tottenham to prise Eriksen from the clutches of Ajax was £11.5million. It was an absolute steal, particularly in the summer of Gareth Bale’s world-record exit in 2013. In the 133 Premier League appearances since, he has scored 28 goals – more than every Tottenham player except Harry Kane – and assisted a further 36 – the most of any player. He might not be revered like Kane, Alli, Dier or Alderweireld by the neutral, but his importance to the cause is undoubted.

8. Thomas Gravesen (Everton)
A riddle wrapped in a mystery inside an enigma hidden under the guise of a madman who could chill the sun with his glare and warm a heart with his touch. Thomas Gravesen could just as easily scare the sh*t out of you as he could slice through your defence with a perfect pass.

“People will think Wayne Rooney was the most talented I’ve played with,” Tony Hibbert once said. “But ability-wise, Thomas Gravesen was the best. For passing and skills, he was different class.”

For the majority of his four-and-a-half year spell, the midfielder would only show such talents in bursts. His lack of consistency often infuriated on Merseyside – not that anyone dared say anything to his face.

But something happened in his final year. Gravesen was a force to be reckoned with at the core of David Moyes’ Everton machine. He was the integral member of the side which secured a fourth-place finish in 2004/05 – that he left in January makes that even more impressive. Everton won 13 of their 22 Premier League games before he joined Real Madrid in the winter; they won just five thereafter, stumbling over the Champions League qualification line. It would not have been possible without Mad Dog’s contribution. And we’re not talking about Martin Allen.

If you remain unconvinced, consider this: He was a member of Gordon Strachan’s team of 2004. There is no greater honour.

7. Morten Gamst Pedersen (Blackburn Rovers)
Graeme Souness is a man remembered more affectionately for his midfield dominance and searing analysis than for his various spells in management. But across his eight separate spells in coaching, the Scot established himself as a man who should not be trusted with a chequebook. Ali Dia, Jean-Alain Boumsoung and Torben Piechnik were all purchased by his hand, after all.

But his transfer hits should not be ignored, and sitting atop that particular list is Blackburn hero Morten Gamst Pedersen. Signed for an initial £1.5million in summer 2004, the Norwegian only actually played one game under Souness. The manager left to join Newcastle in September, having guided Rovers to the bottom of the nascent table.

Pedersen’s early days at Ewood Park would follow a similar path of struggle, but he soon established himself as one of the top flight’s better midfield scorers. He scored 23 Premier League goals in his first four seasons, earned a reputation for a spectacular strike, struck a late winner against Burnley in an FA Cup replay, and did a really funny dive that one time.

Who remembers this shocking dive from Morten Gamst Pedersen at Arsenal in 2009?
???? pic.twitter.com/MxzXSTSOQX

The Norwegian eventually left the club in 2013, just one year short of a decade of service. He remains their record outfield appearance maker in the Premier League (260). Brad Friedel played just one game more.

6. Olof Mellberg (Aston Villa)
When people ask me which footballer I have a crush on – and they constantly do – I tell the same tale each time. I speak of a bearded man with light brown hair and piercing blue eyes. A man who wears lumberjack shirts, eats raw meat and goes out each day with an axe to fetch firewood for our secluded log cabin. A man as rugged and handsome as he is tender and caring. I tell them of Olof f***ing Mellberg.

Perhaps Zlatan Ibrahimovic does the same. “When I had him on the team I never had to look back because I knew he was behind me and I could concentrate on what was going on up ahead,” he said of his countryman upon his retirement in 2013. Mellberg had played the majority of his career at Aston Villa, making 232 Premier League appearances.

“Olof was the person that trigged and challenged me,” Ibrahimovic would add. So, Manchester United fans, while you are busy basking in the glow of familiar hatred which the striker has bestowed upon you once more, ensure to think of Olof Mellberg. I will. I always will.

5. John Arne Riise (Liverpool, Fulham)
Two places below Mark Lawrenson, and a full ten above Kevin Keegan. That is where John Arne Riise sits on a list of all-time appearance makers for Liverpool, snugly in 45th.

Anfield’s love affair with Riise and his left foot would actually begin in France. That was the setting for his debut, the 2001 Super Cup final. He started against Bayern Munich, and scored the first in a 3-2 victory – with his left foot.

He would go on to make 348 appearances for the club – 234 in the Premier League – scoring delightful goals against Arsenal, Chelsea, Everton and Manchester United – all with his left foot. There are few more effective ways to endear yourself to the red half of Merseyside.

Riise won seven trophies at Liverpool, scoring in two finals and one semi-final – with his left foot – and striking the winner against Barcelona at the Nou Camp in 2006 – with his left f…no, hold on, it was with his bloody right. Crikey.

Such was the notoriety behind the Norwegian’s lucky limb, many were left stunned when, given the option of taking Liverpool’s third penalty in the shoot-out of the 2005 Champions League final, he opted to place it. AC Milan keeper Dida saved the effort, and never again would Riise make that mistake. RELEASE THE KRAKEN.

3. Freddie Ljungberg (Arsenal, West Ham)
As the story goes, Ibrahimovic once rejected the opportunity of an Arsenal trial in 2000. Manager Arsene Wenger wanted to see the striker in action – but ‘Zlatan doesn’t do auditions’.

Freddie Ljungberg was the exception to Wenger’s rule. The Frenchman was understandably reluctant to ever sign a player he had not personally seen live, but he ignored his principles in 1998. Aston Villa, Chelsea, Barcelona and Parma all wanted 21-year-old Ljungberg, but the Gunners won the race.

Wenger was persuaded to part with £3m to sign Ljungberg after he starred against England in a friendly for Sweden. Any lingering doubts that the winger would be unable to cope with English opposition dissipated upon his debut – he scored in a 3-0 win over Manchester United.

The 2001/02 season saw the Swede reach his peak. He scored 17 goals as the club secured the Premier League title and the FA Cup. His contribution was arguably the most important of any player – he scored six goals in the last seven league games, then scored in the FA Cup final against Chelsea. Injuries prevented him from reaching those same heights again, but his status as one of Wenger’s greatest signings is confirmed.

2. Ole Gunnar Solskjaer (Manchester United)
‘Always the bridesmaid, never the bride’ only tells half the story of Ole Gunnar Solskjaer at Manchester United. The Norwegian often watched on with a forced smile as Eric Cantona, Andy Cole, Dwight Yorke, Teddy Sheringham, Ruud van Nistelrooy and Wayne Rooney all waltzed down the aisle, the ceremony revolving around them. But Solskjaer would ensure that all attention was on him by the end – for reasons more positive than snogging the groom’s dad.

Even his signing in summer 1996 was overshadowed. He arrived from Molde for £1.5million, just one day before Newcastle broke the world-record transfer fee, signing Alan Shearer for £15m. His debut followed a pattern that would become commonplace: he scored on his debut as a substitute to salvage a draw against Blackburn.

Despite his relative anonymity, Solskjaer finished as the club’s top scorer in his first season, with United winning their fourth Premier League title. Yet the infant-faced executioner was still asked to perform as back-up. He scored four goals against Nottingham Forest from the bench in 1999, and struck the winner in the Champions League final as a substitute three months later, securing the famous Treble. Always the bridesmaid, never the bride.

Solskjaer eventually retired in 2007, injuries having restricted him to just 35 Premier League games in his last four seasons. But he will always have that night at the Nou Camp, as well as that tackle against Newcastle at Old Trafford.

1. Peter Schmeichel (Manchester United, Aston Villa, Manchester City)
Mark Bosnich. Massimo Taibi. Fabien Barthez. Tim Howard. Roy Carroll. The six years it took Manchester United to replace Peter Schmeichel felt like a lifetime. The Dane had been their first-choice goalkeeper for their first seven seasons of Premier League football, winning five titles in that time. From his departure in 1999 to Edwin van der Sar’s arrival in 2005, they won three titles out of six.

There was a reason Alex Ferguson once described his signing as the “bargain of the century”. Schmeichel moved to Old Trafford for just £505,000 from Brondby in 1991, a year before he starred in a victorious European Championships run for Denmark. Few could have predicted his impact.

Schmeichel is remembered perhaps less fondly at Old Trafford after joining bitter rivals Manchester City for a season in 2002, but his impact on the club’s rise should not be forgotten. No goalkeeper can claim to own more than his five Premier League winner’s medals.

He left United a hero, saving a Dennis Bergkamp penalty in the 1999 FA Cup semi-final, serving as captain in the Champions League final, and starring again in the Premier League as the Treble was delivered. There is a reason he is still regarded as one of the greatest keepers in modern top-flight history.