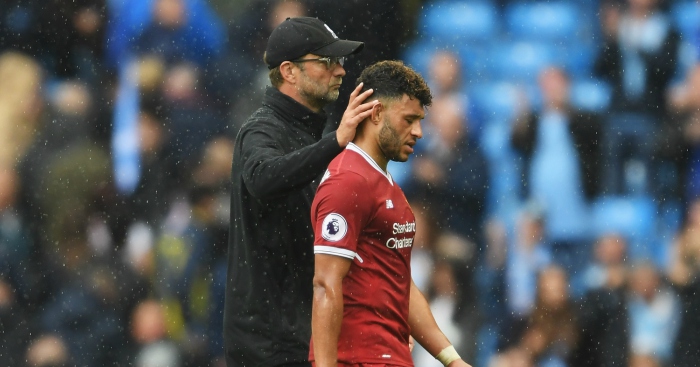 10) Jacob Murphy (Newcastle)
In their 124-year history, Newcastle have spent £10million or more on a new signing just 14 times. Alan Shearer heralded the start of this veritable rollercoaster in 1996; the latest stop came this summer with the arrival of Jacob Murphy.

Of the Magpies’ total £36.4m outlay to prepare for their Premier League return, a winger with no appearances in the top flight accounted for one-third. Murphy spent six separate spells out on loan in the Football League during his four-year stay at Norwich, but impressed enough in his first full season with the Canaries to earn a move to his boyhood club.

Jesus Gamez has played more often this season. Time is evidently still on the 22-year-old’s side, but he would surely have hoped for more than one start in five league games.

9) Alex Oxlade-Chamberlain (Liverpool)
Oh boy. Jurgen Klopp let slip that Alex Oxlade-Chamberlain was in line for his first start for Liverpool in midweek, a full 19 days and four games since he joined for £35m. The 24-year-old will surely feature in his favoured position of central midfield against Leicester on Tuesday, but this was not what he had in mind when leaving Arsenal for more opportunities and a “kick up the backside” in the summer.

Klopp offered something of an explanation for drip-feeding Oxlade-Chamberlain into the Liverpool side, saying that the club are working behind the scenes to “show him how we want to play in this position, that position”. Be it central midfield, attacking midfield or on the wing, there is an adjustment period when transitioning from Arsene Wenger to Klopp’s coaching style.

But while the need to imbue Oxlade-Chamberlain with the skills and knowledge to play in Klopp’s system is obvious, one cannot help but feel his talents could have been used more wisely so far. His introduction against Manchester City when a man and two goals down felt forced and unnecessary, and illustrated a lack of understanding as to what he offers. Then in games against Sevilla and Burnley, with the Reds chasing a win on both occasions, the England international was handed one and 11 minutes respectively. Klopp appears to be unsure how to use his new expensive toy.

8) Roque Mesa (Swansea)
“It’s a small promise with my wife because I told her I wouldn’t shave my moustache until I get called up by the Spanish national team,” said Roque Mesa in July. The midfielder had just arrived from Las Palmas for £11m, and was expected to fill the rather large void left by the departing Gylfi Sigurdsson.

“Roque is a player we’ve been watching, and he also mixes very well with our way of playing,” said Spain head coach Julen Lopetegui in March. “He is a player that we like but for some reasons is not a part of this squad. He is a player at a high level, and at any moment he could be with us.”

From the cusp of the Spanish national team to the cusp of Swansea’s first team, Mesa has enjoyed a Roque few months. Since an unforgiving debut against a rampant Manchester United in August, the 28-year-old has not featured in the Premier League. A promising 90-minute display in the Carabao Cup against MK Dons might well have briefly pleased his wife, before she remembered that the moustache is further from removal than ever.

7) Jairo Riedewald (Crystal Palace)
Having announced the appointment of Frank de Boer on June 26, Crystal Palace were rather reluctant to let the new manager move his own furniture in straight away. They allowed temporary cosmetic changes, with new curtains and wallpaper arriving in Ruben Loftus-Cheek and Timothy Fosu-Mensah. But it was not until transfer deadline day that De Boer was able to spend all his money on a new sofa. Even then, that was the permanent – and expensive – purchase of the one the previous tenant had loaned.

Before Mamadou Sakho joined from Liverpool, Jairo Riedewald was De Boer’s only signing for an actual fee. The £8m defender, a product of the famed Ajax academy, was brought in to help De Boer introduce a new era of totaalvoetbal in south London.

Perhaps it was the performance as a centre-half in the 3-0 thrashing at the hands of Huddersfield that changed the erstwhile Palace manager’s mind. Riedewald did not play again until a nine-minute cameo as a central midfielder against Burnley, and was out of the match-day squad in Roy Hodgson’s first game against Southampton.

Hands up which remarkably handsome idiot tipped Riedewald, Mesa and Vicente Iborra, with their combined 166 league minutes after five games, as signings of the season?

Only once has Malone risen from said bench – in the Terriers’ only defeat of the season so far. David Wagner afforded the Englishman 27 minutes against West Ham, and he understandably failed to rescue a result. He should not expect a decent showing in the Carabao Cup against Rotherham to boost his first-team chances while Chris Lowe remains both fit and German.

5) Charlie Taylor (Burnley)
In terms of phrases that I would expect never to have been said by any sane person ever, “there were so many things that attracted me to Burnley” would be towards the top of the list. And yet there was Charlie Taylor, discussing his decision to depart the uncertainty of Leeds for the delights of Lancashire this summer.

“It ticks every box and it was a no-brainer,” added the left-back. “That’s the huge attraction of the Premier League, just everything about it! Week in, week out you are playing teams like Chelsea and Manchester United.”

Well, Burnley certainly are brushing shoulders with the Premier League’s elite, and really managing rather well, but Taylor cannot claim to be playing too big a part. The 24-year-old is yet to feature in the league, and has not even been in Sean Dyche’s last two match-day squads. And then there’s former club Leeds, topping the embryonic Championship table. “No-brainer” indeed.

4) Jan Bednarek (Southampton)
Southampton vice-chairman Les Reed was careful in his choice of vocabulary when discussing the club’s first summer signing. Of the words he used to describe Jan Bednarek, “promising”, “young”, “potential”, “development” and “Polish” stood out.

The centre-half may well be all five of those things, and few would justifiably argue he is not Polish, but his only first-team performance to date suggests this will be a long journey. Being given the runaround by Nouha Dicko and Ben Marshall in a 2-0 Carabao Cup win for Wolves is not the traditional first chapter to any successful story. Nor is playing the full game against Aston Villa’s Under-23s in a 4-0 defeat.

In Premier League terms, Bednarek was named on the bench for the first two games, but has not even made the match-day squad in the last three. Having been handed his international debut for Poland earlier this month, the 21-year-old will hope his club prospects improve soon.

3) Will Hughes (Watford)
Another who made a bad impression in the Carabao Cup, Marco Silva expressed the need to “give more time to” Will Hughes after Watford’s 3-2 defeat to Bristol City. The midfielder assisted one goal, but was generally off the pace otherwise.

Unfortunately for the 22-year-old, cup competitions provided perhaps his most viable route to first-team football. Only once has Hughes been named on a Premier League bench this season, otherwise being overlooked for the slightly more established talents of Nathaniel Chalobah and Abdoulaye Doucoure. Watford’s promising start – Manchester City mauling aside – means that no players are likely to be dropped for under-performance.

Perhaps that will change after the City thrashing, and Hughes will be given his chance. Having been perennially linked to Premier League clubs since his emergence at Derby in 2011, it will be interesting to see if he can adapt.

2. Eldin Jakupovic (Leicester)
Like dogs fighting over the last piece of discarded leftovers, a number of clubs were linked with Eldin Jakupovic over the summer. Crystal Palace, Watford, Aston Villa and Reading all wanted the 32-year-old goalkeeper, but Leicester beat each of them to the punch under pressure from a corner.

Whether the Foxes signed Jakupovic with uncertainty surrounding Kasper Schmeichel’s future in mind is uncertain, but no-one envisaged him standing in a three-man queue behind the Dane and Ben Hamer come September. Having earned plaudits – and a place in our top ten goalkeepers of the season – for his Hull performances last campaign, it has been quite the fall from grace.

1) Soufyan Ahannach (Brighton)
At least the other nine members of this illustrious selection are actually eligible to play; they are just not being picked. The same cannot be said for Soufyan Ahannach, one of four notable omissions from the Premier League squad lists published at the start of the month.

Brighton signed the winger for £500,000 from second-tier Dutch side Almere City in the summer, but found no room for him in their 25-man squad. And everyone thought Chris Hughton was the nicest man in football. Sickening.