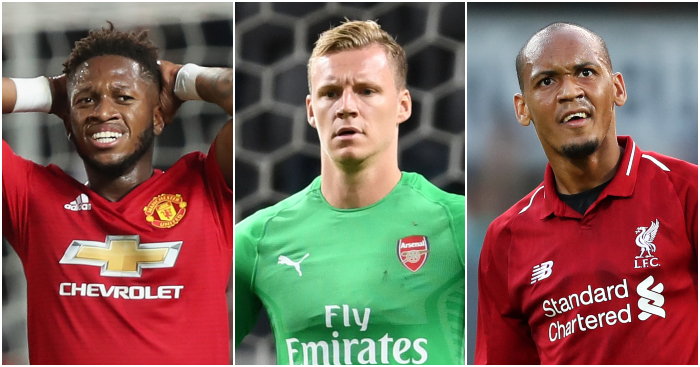 We had a similar list of Premier League signings that looked a bit pointless this time last year. To be fair, Alex Oxlade-Chamberlain is the only one that looks really silly.

10) Adama Diakhaby (Huddersfield Town)
If you had told Huddersfield Town fans in May 2017 that in September 2018 their starting wingers in the Premier League would be Rajiv van La Parra and Elias Kachunga, their first reaction would be a whoop for joy that they had somehow survived a season in the top flight; their second would be utter confusion that three transfer windows had failed to replace two players who had created a grand total of five goals in their Championship promotion season.

The truth is that Town have tried to replace Van La Parra and Kachunga but have so far utterly failed. This summer they brought in Adama Diakhaby, Isaac Mbenza and Ramadan Sobhi. Not one of them is above the age of 22 and not one of them has delivered a full season of performances at any level. The kick in the teeth is that Diakhaby cost £9m from Monaco and is yet to have a shot or create a chance in almost 200 minutes of Premier League football. Town simply do not have the luxury of spending £9m on ‘maybes’.

9) Greg Cunningham (Cardiff City)
“It’s the pinnacle of English football. It’s where you want to play, up against the best players in the world so it was a no-brainer really. The gaffer had been interested for a little while and when he came back when (Cardiff) got promoted, I jumped at the chance. It’s where you want to be: against the best teams. I’ve been playing Championship a lot and I just need to back myself and show what I can do.”

Minutes played against the best teams at the ‘pinnacle of English football’: Zero.

Nobody wants to be the new Scott Malone.

8) Max Meyer (Crystal Palace)
“I have to say that Max and Cheik are, in my opinion, ready at any moment to go in,” said Roy Hodgson last week. Cheik Kouyate duly came in against Huddersfield Town but actual German international Max Meyer still awaits his first Premier League start. Against Town, Palace toiled and yet Meyer remained on the bench, with Jeffrey Schlupp instead chosen by Hodgson as an impact sub. That is pretty damning.

Indeed, Meyer has played a grand total of 36 minutes in the Premier League for a team that is not exactly looking seven shades of wonderful without him. Why persuade a talented young player to join Palace with reported £170,000-a-week wages, if you are then going to treat him like Alexander Sorloth? He was good in the Carabao Cup too.

My concern is that we didn't play that well yesterday and without more game time we'll have a discontented Max Meyer on our hands.

7) Matej Vydra (Burnley)
“He’s different from the strikers we’ve got,” said Sean Dyche. And therein lies the problem; Dyche is not really a fan of different. So even though they have failed to score a Premier League goal between them this season, starts have been given to Chris Wood, Sam Vokes and Ashley Barnes, but not to Vydra, who looks like a signing made by a man who belatedly realised that he had a very small squad indeed. See also Wells, Nakhi.

6) Bernd Leno (Arsenal)
This is just plain baffling. Who could ever have predicted that new Arsenal manager Unai Emery would opt to continue with the old Arsenal goalkeeper regardless of his obvious discomfort with his playing style? He has made a series of errors with ball at feet and yet Cech remains the Gunners’ first-choice keeper while £19.3m new signing Bernd Leno remains on the bench. Having seemingly fixed an Arsenal problem in the transfer window, Emery is denying himself that solution, leaving him in back of the cupboard like emergency biscuits.

WHAT DOES LUCAS TORREIRA AND BERND LENO HAVE TO DO TO START MAN THIS IS GETTING OUT OF HAND https://t.co/duFMKyjokY

5) Jonny Evans (Leicester City)
We presume that Wes Morgan’s utterly catastrophic 69 minutes against Bournemouth on Saturday will prompt a change at Leicester but it is verging on the ridiculous that Evans was bought by Leicester this summer – along with two other new centre-backs – and yet Claude Puel persisted with 34-year-old Morgan as Harry Maguire’s partner. Why buy a former Premier League title winner, saying “he knows exactly what it takes, he is a winner and a leader”, and then leave him on the bench?

Wes Morgan’s suspension gives Claude Puel the chance to make a change at CB next to Harry Maguire for good. It can be dicey removing a club captain from the XI, but Morgan is Leicester’s 4th-best CB and shouldn’t be starting. This is the window.

Tellingly. Evans’ only Premier League start this season (against Wolves) reaped Leicester’s only clean sheet. Which should immediately destroy any argument that Maguire and Evans are both left-sided centre-halves and so cannot possibly play together.

4) Leander Dendoncker (Wolves)
“It’ll take him a while to adapt because the standard and pace of the Premier League is very different to the Belgian league,” said Wolves sporting director Kevin Thelwell, leaving us wondering why Wolves signed a player on loan for the Premier League who was nowhere near ready to play in the Premier League. Maybe there was a reason that West Ham made such a low-ball offer for the Belgian in January.

Astonishingly, Dendoncker has not even appeared on the bench for Wolves in the Premier League (though he played in the Carabao Cup) but last week joined up with World Cup semi-finalists Belgium for their internationals. Right now, that permanent move next summer looks very, very doubtful indeed.

3) Lucas Perez (West Ham)
‘Given the false information spread by the media that has affected my image, I am obliged to explain the only truth: I have never, ever refused to warm-up in my whole career, let alone play a match,’ said Lucas Perez after Sky Sports made a massive leap in suggesting that the Spaniard had defied the instructions of manager Manuel Pellegrini. He went to say that ‘as a professional I accept the decision and I will continue working hard to have as many minutes as I can’. Right now, he would probably take just about any minutes at all after playing just 40 in the opening five games of the season.

You might think that Perez was a lovely little bargain at just £4m but he is only a lovely little bargain if you have any intention of using him; on Sunday he was one of only two fit West Ham strikers and yet Pellegrini still opted for Michail Antonio when Marko Arnautovic got injured. Mind you, he did watch him stink out the Carabao Cup.

2) Fred (Manchester United)
It was a signing that made some degree of sense back in June when we thought he was going to be the first of many. He was eventually going to be the third wheel in Manchester United’s midfield, unlocking the brilliance of Paul Pogba by dovetailing with Nemanja Matic behind the Frenchman. And then it turned out United were only going to spend real money on one player, and that player being Fred – when United already had Marouane Fellaini, Ander Herrera, Andrea Pereira and Scott McTominay – ceased to make any real sense.

Now here we are five games into the Premier League season and Fred has played no part in United’s last two matches, which were both started by Jose Mourinho’s comfort blanket Fellaini, with Herrera and McTominay both getting minutes off the bench. We cannot help thinking the money would have been better spent on a right-sided forward.

1) Fabinho (Liverpool)
We have had our fingers burned before with Andy Robertson and Alex Oxlade-Chamberlain, but we’re not sure either faced the same kind of competition for a starting place as Fabinho, who is yet to play a competitive minute for Liverpool after joining for £43.7m. Right now he is behind the excellent Gini Wijnaldum, the evergreen James Milner, the effervescent Naby Keita and the Jordan Henderson in the central midfield pecking order. Hell, even Adam Lallana has played a few minutes.

“He came from another league, a completely different system and we have a good team together so that takes time, but the plan is still he will make us better so, from my point of view, it’s all fine. I know the situation is not like people expected. I can’t change that,” says Klopp.
The examples of Robertson and The Ox make us believe Klopp will eventually be proved right in his judgement of Fabinho. But then we remember Loris Karius…